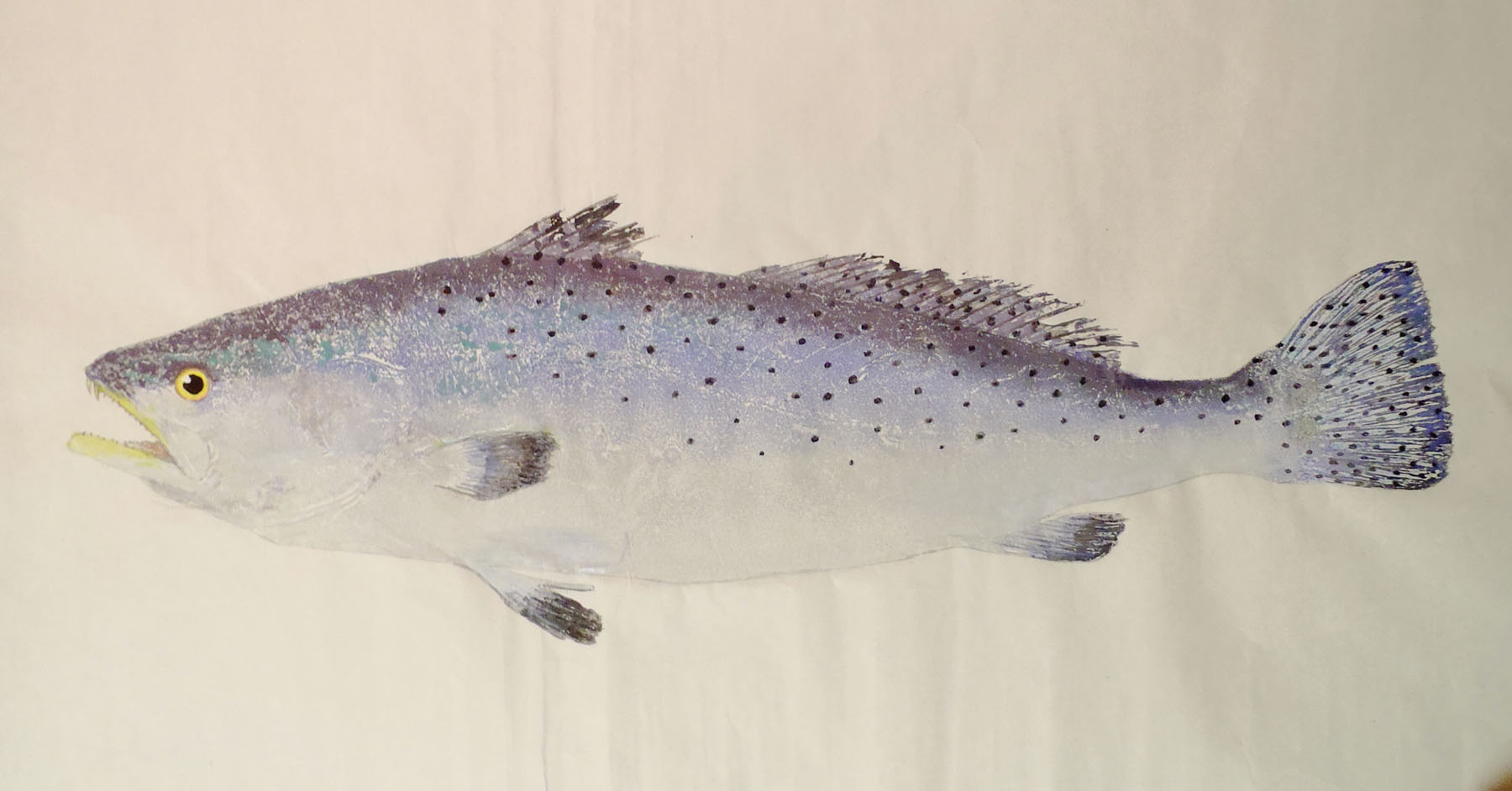 Here is one of the Holy Grail Gyotaku Paintings.
While the blue-gray light of the morning sun began to filter through a thick layer of clouds overhead, I cast my sinking Fat Boy toward a mat of grass lying tight to the bank on the west shoreline of the Upper Laguna Madre. After it plopped down in the crystalline shallows, where sandy pockets spread creamy accents against a dark, grassy bottom, I began to move the lure through the water, using rhythmic twitches of the rod tip to make the head of the plug wobble side to side as it swam.

When the trout struck, I couldn't tell right away she was a big one; I felt only a single, sharp tap. Once the line came tight and I was connected to the fish, I knew she had good weight. Soon after we were joined in battle, her head erupted through the water's surface, surrounded by a gleaming collar of silvery spray. A fish often reacts this way when it has taken a lure deep, and one of the hooks has become entangled in its gills.

The fight was a short, intense one. In a matter of maybe two minutes, the trout was circling around me, turned on her side, with her life's blood trailing crimson behind her as it flowed out from under her gill plate. Before I reached out to land her, I could already see she would never survive our tussle. One of her serrated gills protruded obscenely beyond the golden edge of her lip.

The Boga Grip and measuring tape verified her dimensions exactly. Thirty inches in length, she weighed just over eight pounds. Immediately, I slipped into an ironic mindset, elated to catch such a beautiful specimen, but disappointed to know I could not release her to live on and grow even larger, while spawning more of her kind. A kind of bittersweet melancholy infused me then, a feeling of sadness fueled by helplessness. These days, I never intentionally kill trout like this one, but sometimes I have no control over the outcome of our encounters.

Before I could traverse the fifty yards lying between me and my boat, the trout was already dead. Having eaten a couple of other large specimens in similar circumstances, I did not relish the thought of trying to turn the flesh of the fish into sustenance. As I began casting again in the growing light, I mulled over other, perhaps more meaningful ways in which I might make use of the trout, but no ideas came immediately to mind.

In one sense, the concept of grace can be defined as "the ability to perceive and seize upon powerful opportunities when the time is right". The two components in this definition (perception and action) are equally important. In order to maximize the potential of these opportune moments, one must first grasp their gravity.

I became aware of this interpretation of grace while reading the work of the famous psychotherapist, Dr. M. Scott Peck. In his popular book The Road Less Traveled, he cited a perfect example of grace as viewed within this context. While working with a depressed person who had become incapable of recognizing beauty or experiencing joy, the doctor became frustrated, finding it difficult to change the patient's negative mindset.

During one of their therapy sessions, Peck noticed a large, colorful butterfly tapping at the window of his office. Instantly, he recognized a rare opportunity. Without saying anything, he simply opened the pane of glass, allowing the creature to come inside. When the insect landed on the desk between him and his patient, the relevance of the event soon became obvious.

The eyes of the depressed person filled with tears of joy. The existence of beauty and goodness in the world could not be denied, as the butterfly's delicate, gossamer wings slowly opened and closed, reflecting iridescent light. A therapeutic breakthrough then occurred, and the patient started down a road to recovery, toward a life where positive thoughts and emotions better balanced negative ones.

I learned an important lesson while reading the account of this mesmerizing moment. The ability to recognize the value in seemingly insignificant things and to maximize their utility can be extremely rewarding. I now keep an eye out for butterflies tapping on my windows. Sometimes, they are exceedingly difficult to perceive.

A couple of weeks after catching and killing the thirty-inch trout, I was sitting in my office, talking on the phone, when I became acutely aware of what was right in front of my face--a painting of the first eight pound trout I ever caught, back in 1998. I made the artwork myself, using an Asian technique called Gyotaku, first applying paint to the surface of the fish, then taking a print, or impression, by pressing rice paper onto the paint.

Suddenly, I knew exactly what to do with the frozen specimen. I'd create a series of Gyotaku paintings and offer them for sale, then give back a portion of my proceeds to enhance and preserve the fishery in some way! As it turns out, coming up with the concept was the easy part; executing the plan proved more difficult.

In thinking about how I would be able to make beautiful and useful images, I realized it would be difficult to do alone, given the size of the fish. I procrastinated for a while, trying to solve the dilemma. Eventually, I found a partner to help me with the project. When I met Heather Nicholson, I was immediately impressed by her verve and intensity; the passion she expressed about things rang clear and true, seeming to emanate from the center of her being. Somehow, I just knew she was the right person to assist me in making the paintings.

When we started the work, my new-found friend proved her worth immediately. Heather is a calculating, careful and thoughtful person, which was helpful to me. I tend to rush things. Her deliberate demeanor balanced my impulsiveness, served as a kind of yin to my yang. We studied the technique, viewing videos online, reading expert accounts. During the research phase of the project, the young lady rightly concluded we would benefit greatly from attempting to produce paintings of smaller fish before taking on the task with the big one.

So we sacrificed two sixteen-inch trout toward that end. I rationalized the act by remembering the thousands of keepers I and my customers have released over the last fifteen years. We were able to capture ten images of these trout, eventually naming them the Keeper Gyotaku Series. Significantly, we learned plenty about the process of making the prints, specifically the importance of displaying the fish properly before starting the production, using ink of the right consistency, and identifying an order of operations to follow while making each impression.

When the time came to thaw out the thirty-incher, clean the slime off her body and pin her in place with fins fully outstretched, we were well-prepared to create something grand. We composed sixteen original impressions, which we titled The Holy Grail Gyotaku Series. I came up with the concept because the thirty-inch mark is a standard sought by so many trophy trout enthusiasts. In a way, such a trout is a kind of holy grail for anglers involved in this sporting quest.

Before offering the pieces for sale, we painted eyes and dots on them, and touched up some of their rough edges. For this reason, mine and Heather's work does not fit the purest definition of Gyotaku; I'd describe them as enhanced Gyotaku paintings.

For me, the project proved satisfying in two major ways. I'm thrilled with the quality of the finished pieces, and pleased to have created something meaningful while working in a synergistic partnership with another artist.

To this day, Heather and I continue to search for more ways to use the images of the fish. Currently, we've created digital, full-sized posters commemorating two of the prints, and have also generated an 11" x 14" piece based on a picture we took of the big fish during the process of making the prints.

We believe our artwork captures the essence of the beauty of cynoscion nebulosus effectively, if not always realistically. Some of our images are more abstract than others, mostly due to the colors we used. All of them are done with the aim of recording the dimensions and character of the species in an aesthetically pleasing manner.

Some people in the fishing community might enjoy making Gyotaku prints of the fish they catch as much as we have. I will not advocate killing a bunch of trout just to make paintings, but if a fish is throat-hooked or has a broken gill and can't be released, making images like these can be satisfying, especially for artistically-inclined souls who enjoy the challenges associated with producing such things.

In the twenty-first century, I believe the most ethical way to commemorate the catch of a big trout is to use digital imagery and make a fiberglass replica mount which closely resembles the fish. Doing so allows one to release the specimen, in the interests of maintaining the fishery.

Collectively, we need to keep a hopeful eye cast toward the future, to do all we can to preserve and enhance the health of the fishery. Accordingly, Heather and I have pledged to donate twenty per cent of our proceeds from the sale of all artwork related to The Holy Grail Gyotaku Series toward that end. We will contribute either to a research facility, or a Parks and Wildlife Hatchery, possibly both. Anyone interested in seeing and/or purchasing some of the artwork can find plenty of information related to this endeavor on my website, CaptainKevBlogs.com. Descriptions and prices can be found on the Captain Kev's Products page and the Blogs page.

All of this fun and inspiring work has helped turn a negative into a positive. We were able to utilize the saving power of grace. In the process, I discovered two brilliant butterflies tapping at the windows of my world. Both Heather and the Holy Grail trout have blessed my life in meaningful ways.