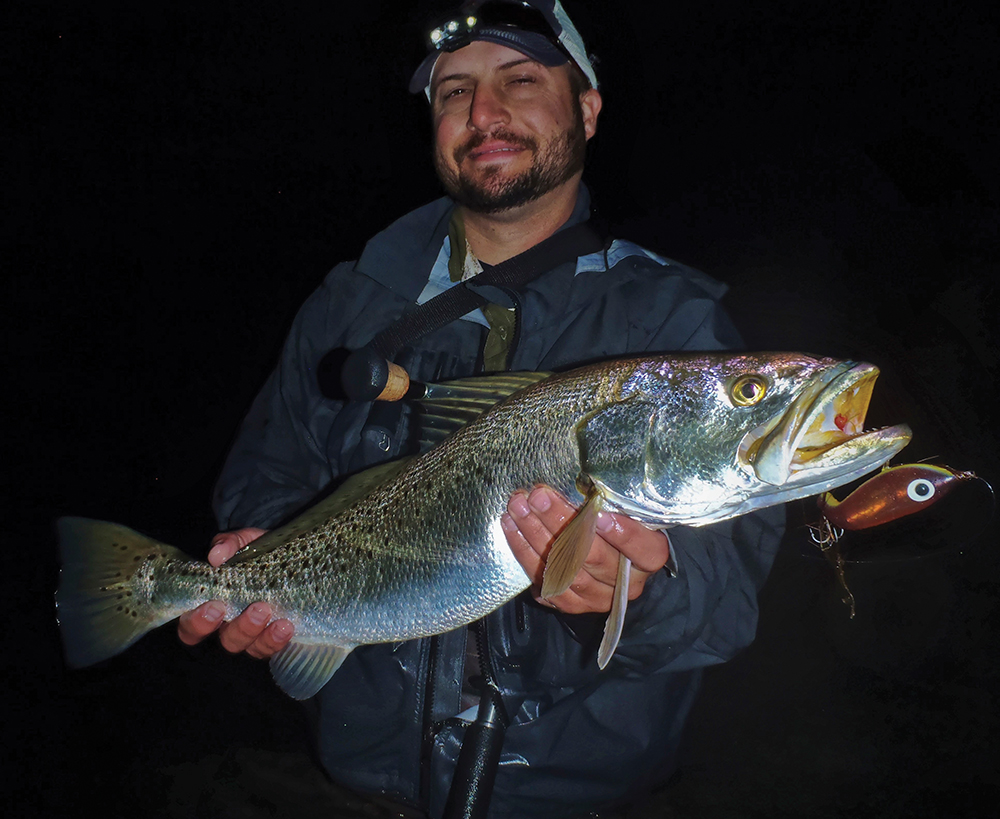 Fishing in the hours just before dawn often proves effective in March, especially in areas holding water of exceptional clarity. Clayton Runyan caught this long trout in such a scenario a few years ago.

A couple decades ago, when I competed in tournaments regularly, most of the events allowed us to launch our boats wherever we wanted, either before a fishing start-time or a designated blast-off time. While fishing, we almost always stayed within clearly defined boundaries.  About the same time I stopped participating, most tournament organizers changed these rules, requiring all contestants to embark in consecutive order from the same location, and almost never defining boundaries. When this happened, I made a prescient statement.

“Some guys will fall into a trap,” I mused. “They'll think they aren't trying hard enough unless they're running as far from the dock as possible.” My prediction turned out true in many cases.  Stories began circulating about tournaments held on the Upper Coast, won by contestants entering trout caught south of the Coastal Bend. As these stories fueled the desire of tournament anglers to fish farther and farther from the launch sites, boat manufacturers took steps to enable their obsession.

In the early parts of the 21st Century and continuing to this day, folks making and selling bay boats in the Lone Star State build hulls which skim across the water at break-neck pace, without sacrificing too much shallow-running capacity or smoothness of ride. Hot-shots don helmets and goggles, bolt three and even four hundred horsepower motors onto these skiffs and push them to speeds approaching 100 mph. Consequently, the start of a contemporary competitive angling event closely resembles a NASCAR race.

I didn't fully grasp how things would evolve, but I can draw several conclusions based on my observations of the situation at hand. Using a televised example from a Redfish Cup event helps clarify what I mean. The tournament took place in Alabama; more accurately, the rules of the event required contestants to launch from a site within the state.

Without specifying a boundary for the angling activities, the three-day format allowed a pair of partners to weigh two legal-sized redfish per day. After the first two days, the field dropped from a much larger number down to five teams, who started over at zero and fished the last day to determine the winner. In this case, the team leading after the first two days revealed they'd been fishing about 75 miles from the dock, in Mississippi waters.

I paraphrase the recorded remarks of one of the men:  “We're goin' for broke tomorrow,” he said, on the eve of the final. “We're on some big fish in The Delta, and we're goin' after 'em.  We'll only have about twenty minutes to get 'em, but if we do, we'll win.”

Amazingly, these dudes planned to forsake the area where they'd earned the lead the first two days, in favor of making a 143-mile ride from Mobile to the Mississippi River Delta, near Venice, Louisiana, where they hoped to quickly catch two fish, then turn around and race back to the tournament scales. Cameras followed their progress the next day.  Hoping to refuel about two miles from their chosen spot, the contestants found a barge blocking them from the pumps.

“We got no choice.  We have to run on over there and hope we can make it back for gas after we get our fish,” one nervously realized. The tone of his voice changed dramatically while he put the trolling motor over the bow once they reached their destination. “Tide's wrong, water's all messed up,” he whined. To his credit, the fellow did make three casts, though his disgusted partner remained seated and never picked up a rod. In the end, these guys made a 286-mile boat ride to make three casts, slinking up to the scales with a skunk.

While watching all this unfold on the screen, I began laughing so hard I could barely stay in my easy chair. Later, telling others about what I'd seen, I joked, “Those guys would have had a better shot at winning if they'd just dropped a lizard behind the boat and trolled around the harbor in circles all day.” The whole thing still strikes me as hilarious, but I'm well aware the experience of these two contestants and my sarcastic comments about them do not mean others haven't benefited handsomely from making long runs in trout and redfish tournaments.   Some certainly have.

With a competitive goal motivating decisions, anglers having legitimate confidence and significant recent experiences in places far from the launch-site of a tournament can enhance their chances of winning by making long runs, even though their decision will limit the amount of time they spend fishing. The key to the preceding statement involves confidence in the likelihood of recent results repeating themselves. Generally, this assumes various environmental conditions remain relatively stable.

When sitting in a boat in Alabama, it's hard to tell which way the tide rolls or how hard the wind blows in Louisiana. Sure, the cell phone or radio will provide some clues, but digital data isn't nearly as reliable as a pair of discerning eyes on the scene. Anyone traveling scores or hundreds of miles in a boat will likely encounter changing weather and water conditions. All experienced captains know this.

These truths relate specifically to anglers fishing organized events with the purpose of weighing bigger fish than those they compete against. For the average angler, out for some fun, hoping to catch a few fish, the lessons bear a different kind of significance.  Weekend warriors don't leave the dock with competitive goals in mind, but they can still fall into the trap of thinking they'll catch more and bigger fish if they travel farther from the dock.

The old saying sums it up best--the grass is always greener on the other side of the fence. In a fisherperson's world,  this means the fish are always bigger at the other end of the lake.  Similarly, when we're wading, the best fish always lurk in water barely too deep for us to reach. If we're standing on a jetty, the good ones swim well out away from the rocks, but when we're in a boat working those same rocks, they hide in hissing cracks between the granite boulders.

The wise adage becomes the reason some boat owners make their first choice about where to drop the anchor when they embark on their maiden journey. They run straight to that flat just across the channel from where they'd always parked the truck when fishing from the bank, having long imagined the place to be teeming with all kinds of pretty, prized fish. I jest, on some level, but a serious and relevant point does form the foundation for the fun.

As human beings, we sometimes fall into a negative mindset, thinking our station in life holds us back from something better. The search for greener grass constantly motivates us to try and wiggle our necks through a hole in a metaphorical fence. If we can just get out of our current situation, everything will turn to peaches and cream. That's how it plays out in our minds, if we give in to weakness.

Truth is, our desires and perceptions alter the color of the grass on the other side of the fence as inevitably as the tide rolls in and out of the harbor. We should all remain cognizant of this and resist the urge to think making long runs from the dock will always improve our chances for success. Guides in my home waters who load clients in their boats at the JFK Causeway, then run to Port Mansfield to fish, might want to heed this advice. Some of the clients complain about their plans. “Pappy don't want to sit on a cushion and ride 75 miles with a 50 mile per hour wind in his face to catch a few fish.”

For most people, that's really the point. Average Joes aren't out to prove anything of significance when they choose to go fishing. They seek a relaxing, satisfying outcome, one directly related to the act of trying to convince some fish to bite at what they dangle in the water on the end of their line. This brings back the statement I made about the two dudes who spent all day racing across state lines instead of trying to catch fish.

I'd venture to say their plan morphed into a form of madness, because of its extremity. Those men allowed the desire to win to push them to make a crazy decision. For sane people, spending more time experimenting with strategies like lure choice and presentation makes much more sense than passing over miles of water, looking for an angler's version of Kathmandu. Such a place exists in our minds, our fantasies, not in the tangible world. I stand behind what I've written and asserted many times—knowledge of the body or bodies of water in which the angling effort takes place plays a paramount role in the success of the endeavor.

Here, I don't mean to suggest one shouldn't study and learn as much as possible about the body of water and build an extensive catalog of spots over time.  Such activities definitely increase the odds for success.  But on a given day, picking a piece of the pie relatively close to the boat ramp and spending most of the allotted time wetting a line within that piece. provides more satisfaction and potential for positive results than zooming around in the boat and watching the world whiz by.