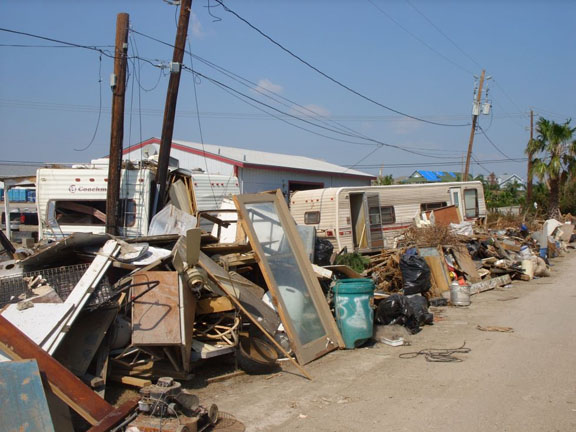 I'm an acknowledged worry wart. Recently, well-publicized crises have given those of us who fish for a living plenty to fret about. This year brought both economic and environmental calamities which threaten our livelihoods.

Oil shot up to nearly one hundred and fifty dollars a barrel, driving the price of a gallon of gas to the four dollar mark. This increased our costs of operation and made it more expensive for our customers to get to us; it also eroded their confidence in spending on luxury items like guided fishing trips. Wall Street Banks went broke and the costs of stocks plummeted, causing a reduction in the value of portfolios and retirement accounts nationwide, further damaging the willingness of our clients to spend.

Trout in the Galveston Bay system were said to be carrying unacceptable levels of potentially harmful toxins by a state government agency. Two hurricanes slammed into our coastline, either damaging our homes and businesses, or those of our valued clients. One of them also dumped disturbing volumes of pollutants into Galveston's already-stressed bays. The phones of many guides went nearly silent after all the dominoes finished falling.

When talking to my fellow guides over the last few weeks, I've been consistently told that business is slow, excruciatingly so, but one prediction I heard caused more beads of cold sweat to form on my forehead than all others. The prognosis came from the mouths of several respected fishing pros, people whose opinions and outlooks I generally trust.

"We'll probably have a bad freeze this winter," they lamented. "That'll really be the end of us. Seems like every time we get hit by a big storm, there's a freeze the following winter." Such words make me shudder at the thought of dead fish piled up in rows along the icy banks of our bays. I remember somber photos of just such evidence from the events of 1983 and '89.

Rather than passively allow my brain to spiral negatively around such a concept, I decided to look into the weather archives to see if there is indeed evidence which supports the idea that a major hurricane affecting an area is likely to cause a freeze the following winter. With the help of the internet, accessing relevant information is not too difficult.

I looked to various sources, most prominently data and charts on the websites of NOAA and the National Weather Service. First and foremost, I wanted to narrow my search to include only Texas, since I know the people who first exposed me to the theory of a storm/freeze connection were talking about our home state, not the entire basin of the Gulf of Mexico.

Quickly, I listed twenty one major storms (category three or greater) that came ashore on the coast of Texas beginning with the "Storm of the Century", which devastated Galveston Island in 1900. I included 1988's Gilbert, which didn't actually make landfall here, because of its strength and size and the magnitude of its effect along our coast. Significantly, I could find only four examples of documented fish-killing freezes which occurred in winters following those cyclones. A freeze in 1917 followed the 1916 storm which hit near Port Mansfield, one in '62 followed Carla, the well-documented '83 event came on the heels of Alicia and the deadly chill of February 1989 followed Gilbert.

In looking for evidence of lesser storms preceding documented freezes, I found that a category one storm hit Freeport the summer prior to a deep January 1930 freeze. There may have been a correlation between either the Freeport storm of '41 or the Matagorda Bay storm in '42 and a freeze in '42, though the time frame for the freeze is hard to find. Similarly, details for a freeze event in '45 are hard to trace, but there may be a connection to an August storm which struck the Matagorda Bay area. Certainly, a freeze in 1959 occurred after a strong tropical storm (Ella) in '58. Most notably, the December 1989 freeze, one of the worst in our state's history, followed an active storm year in which three named storms impacted the upper coast. Two of those, Chantal and Jerry, hit near Galveston, where many fish were later killed by the chill.

A majority of the most damaging freezes I discovered in my research for this piece did not follow strong storm activity, though. For instance, the arctic blast of 1899 was called a 200 to 500 year event, meaning a freeze of that magnitude would likely occur only once every two to five hundred years. The effects of those icy days doomed many citrus trees in the orchards of the Rio Grande Valley; undoubtedly, millions of trout, redfish and other piscatorial species also went belly up. It's perhaps tempting to search for a connection between that costly event and the deadly storm which forever altered the history of Galveston Island, but the fabled Storm of the Century occurred some nineteen months after the freeze.

Of course, the people who alerted me to the storm/freeze connection were not referring to storms spawned by weather phenomena which started with a freeze; they were asserting that the opposite happens, that freezes follow storms, so any connection between a cold winter of 1899 and the most infamous hurricane ever (before Katrina) must be discounted. Much more significant with respect to this discussion are the facts that no major storm hit the coast prior to 1899's super chill, nor did a major freeze follow the storm of 1900.

Similarly, the freeze of '51 is known to have caused the mortality of many living things, including fruit trees in The Valley and fish along most of the coast. The lack of mature trout in Texas bays in subsequent months has been well-documented. The '51 event came at the end of a "big chill" which spanned more than a decade, with eight freezes in twelve winters. Importantly, only two major hurricanes affected the coast of Texas during that frigid span. Though the overall period saw moderate levels of tropical cyclone formation, the prolonged dip in temperatures can't be clearly connected to unusually strong storm activity.

In fact, many of the documented hard freezes in coastal Texas over the last century can be shown to have followed slow or downright dead storm seasons in the western Gulf of Mexico, indicating that much of the time, a freeze is in no way related to a prior storm. Marshall McFarland, of the Environmental Studies center at Texas A&M, reviewed many of the freeze events in attempt to determine their causes. His conclusions are that "causes for Arctic air dipping this far south[are]related to anti-cyclonic activity, jet stream positioning, etc." He makes no mention whatsoever of a connection to cyclonic activity occurring during the previous hurricane season.

The decade from 1911 through 1920 was the most active storm producer of the twentieth century, spawning four major storms that hit Texas, but no major fish killing chills occurred in the wakes of those storms. 1933 was Texas' most active cyclonic year in the thirties, with five named storms affecting our coast, but no freeze occurred during the following winter. Similarly, 2005 was the most active storm season on record in the Atlantic Basin, but the following winter was warmer than average in Texas. Other major storms can also be shown to have come before warm winters, including Beulah, Celia and Brett.

Basically, the evidence shows no clear connection between the landfall of a hurricane in an area and an increased likelihood of a freeze there the following winter. It should be noted that I have been amply lenient in the definition of the term "area" for the purposes of this discussion, deeming the whole state to be the area. Some of the storm/freeze events only appear related when the entire state is viewed as the area. Further narrowing the definition of area would lessen the strength of some of the correlations.

All of this research helps put my mind at ease. I respect many of the guides and others who believe in the storm/freeze connection; some, I'm sure, have forgotten more about fishing than I'll ever know. But on this issue, I can't agree with them.

I believe those who lend credence to the storm/freeze theory do so because they place far too much emphasis on a relatively small portion of the data; poignantly, it's the part they actually experienced. I'm sure they find it hard to erase dark images that linger in their minds from 1983 and '89. Recalling only those years paints a partial, painful and misleading picture of the connection between hurricanes and freezes on the Texas coast.

When digging out from under a mess scattered by strong cyclones, it's easy to become frustrated and gloomy. Heck, I get that way even when I haven't been slammed by a storm! Sliding market tickers and rising dollar counts on the gas pump make me nervous. Contemplating the disastrous effects of a fish killing freeze is even more troubling.

Just such a dreary event may get a grip on the Lone Star State in the coming months, I know. But it is comforting to learn that we aren't "likely" to be crippled by a freeze this winter because hurricanes harassed us last summer. Ike and Dolly chased poor folks from their homes; here's to the hope that Jack Frost doesn't chop off some of their toes!