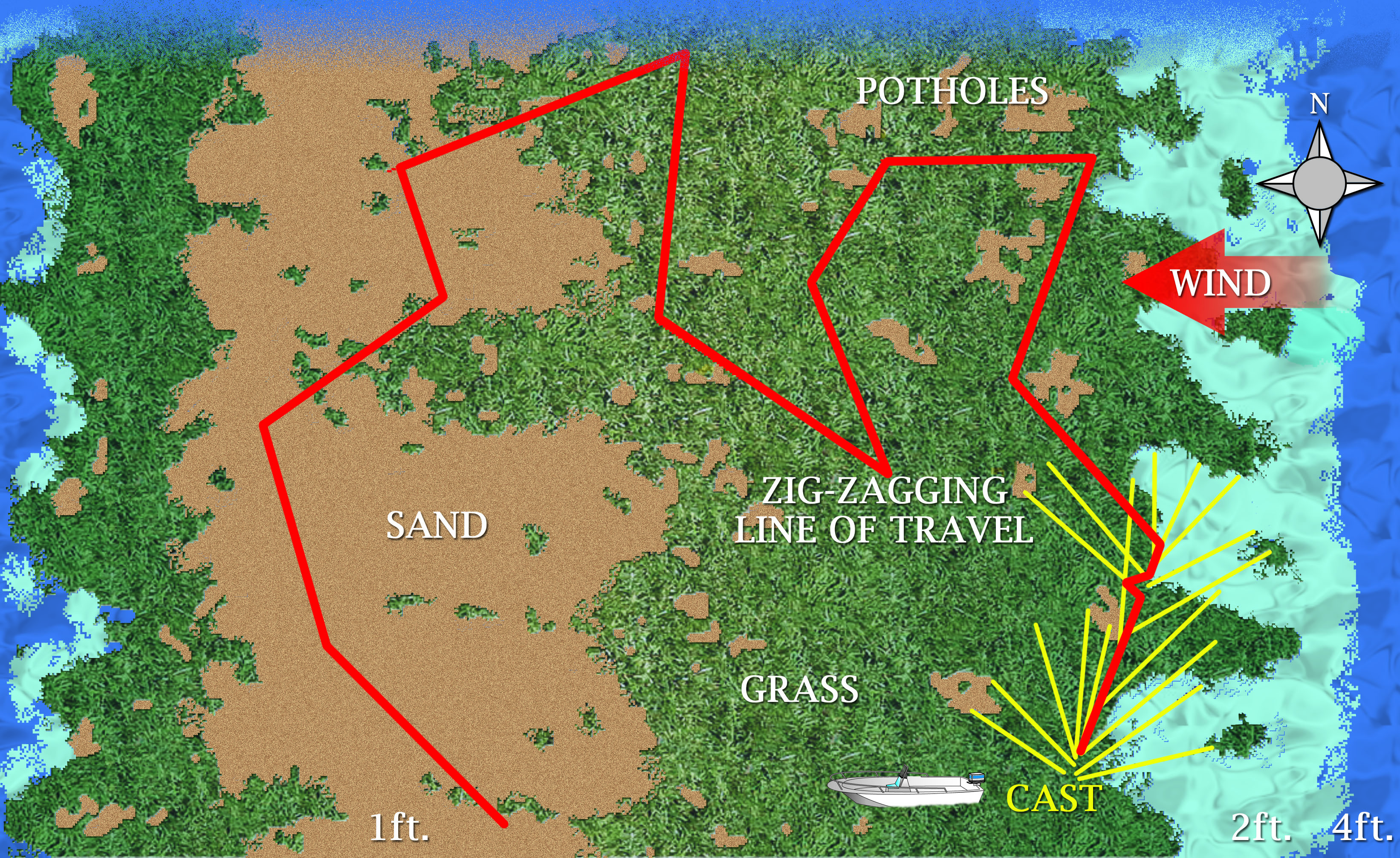 Two men idle their boat up to a deep gut bisecting a flat and drop anchor upwind of the drop off. One climbs over the gunwale and heads sideways to the wind, sometimes casting at a right angle to the breeze, sometimes slightly upwind. When his Corky lands, it skips along, running at an angle off the edge of the gut, then turning and wobbling enticingly along the contour. He hooks his first trout less than twenty steps from the boat and stops to stand and fish.

His buddy, a "wanderer", heads downwind out of the boat, barely pausing when he gets a strike at the edge of the gut, then crossing through the depths on the tips of his toes until he reaches a shallow flat on the far side, all the while making long casts and working his plug straight against the chop. He doesn't notice when his partner hooks up; his eyes are focused intently on the water around his lure, watching for signs of his next strike.

When setting up a wading session for my group, I usually attempt to anchor the boat upwind of the spot to be fished, just as our two imaginary anglers did. Unless the wind is light, under eight or so miles per hour, this makes for the most comfortable and productive approach. However, I do not always proceed through the area straight downwind. Often, a sideways approach to the walking and casting produces better results.

The same truth applies to those fishing from a boat. Working a structural element or spot from an upwind position while moving crossways to the wind with a trolling motor and Power Pole is often more productive than simply drifting straight through the area. Whether walking in the water or casting from the deck of a boat in a controlled drift, the direction of the casts should also be considered to achieve optimal coverage of the area. Sideways casts allow lures to be worked in slightly different ways than those made straight downwind. Sometimes, fish prefer lures that move through the waves at an angle.

More importantly, casting sideways at various angles will allow anglers to thoroughly probe parts of the area before passing through them and also keeps the lure in the strike zone more of the time in certain types of terrain. Fish often lurk on the fringes of structural elements like reefs, sand bars, guts or potholes, and casting crosswind from the upwind side of such structures allows an angler to pull the lure through the strike zones along their edges.

Consider the following situation: a south wind blows across a long reef that runs east to west. The water on either side of the reef is about waist-deep, while the top of the reef is covered by knee-deep water. An angler who stays upwind of the reef and works east or west first will likely catch more fish than one who charges straight over the top of the reef to the other side. Moreover, an angler should cast in various directions while staying in the deeper water on the upwind side of the shell, making some casts directly in the line of travel, some right along the edge of the reef and some on top of the oysters.

Obviously, when a bite is felt, the angler should stop and make several more casts to the same small area before moving on. The importance of this part of the equation cannot be overstated. Almost all fishing guides I know who specialize in wading complain about the difficulty of convincing their clients to stop and fish once they get a bite. Trout and redfish most often swim in schools or pods; locating one fish often means locating several or many. Standing still and fishing is sometimes more productive than marching onward.

That's where the Power Pole is a great tool for the boating angler. It allows for quickly stopping the boat without much noise in most situations so that anglers can thoroughly cover spots where they've located fish. When the moving begins again, that too can be done more quietly than with conventional anchors.

A wading angler working the upwind side of a reef will eventually have to return to the boat, and the direction of travel on that trek is important too. If a large number of bites were had, all on the upwind side of the shell, it might pay to back around in a small, tight circle and pass through the same stretch in the opposite direction. If fewer bites were had, walking across the reef and fishing the downwind edge might make more sense.

Working crosswind along a reef while casting ahead is relatively simple. Consider the importance of directional control in a more complex setting, one in which an east wind is blowing across a north/south running spoil bank. Depths on the east, or upwind side, of the bar slope gently off from about a foot to nearly four feet over a span of sixty to eighty yards. On the west side, the drop off is more severe, going from a foot to five feet in less than twenty yards.

On the east side gentle slope, potholes lie in the mid-range depths. Isolated grass beds reach out into the deeper parts and narrow grassy guts reach up onto the bar itself, which is primarily sand. On top of the bar, washtub-sized grass beds are scattered here and there, concentrated at the heads of the grassy guts. Near the west edge, the vegetation starts up again, dotted with scattered potholes on top of the bar. Green fingers and potholes reach off the edge into the depths.

A wader who wishes to optimally cover all parts of the aforementioned terrain will do so through careful execution of a plan, not by putting his head down and high-stepping straight downwind. Doing so would cause one to pass through most of the fish-holding zones too quickly, and to completely miss others.

The plan for fishing such a spoil effectively would involve walking sideways to the wind while casting in various directions, as if the spoil were the reef in the earlier example. Casts should be sent at every edge of every pothole or isolated grass bed to be seen. As always, when a fish is located, the angler should stop and thoroughly cover the spot, making repeated casts in slightly different places at the location until ten or more casts have been made without a bite.

Actually, the number of casts or minutes appropriate for waiting depends upon several factors, including the size of the first fish caught, the general frequency of bites expected given the season and the presence or absence of other tell-tale signs indicating fish have been found. Most anglers should wait longer to move forward than is their usual habit; that much is certain. I know this after observing hundreds of anglers with varying degrees of expertise.

Attention should of course be paid to which "types" of casts elicit the most strikes, so that the search for fish can become better focused. If most of the strikes come on casts made at a particular type of feature, such as small potholes surrounded by dark grass, or the upwind edges of large potholes, or isolated grass beds on the edge of the bar where the grass "feathers out" into the sand, most subsequent casts should be made to those places. If the fish seem to prefer a lure skimming rapidly along the edge of some feature after being cast crosswind, or when paused in the middle of a small bright spot or atop a grass bed, more casts of that type should be made.

After thoroughly working the upwind side of the spoil for as far as the angler deems reasonable, (taking into account the number and size of fish caught) an attack on of the rest of the available terrain should be made. Walking at an angle toward the bar, back in the direction of the boat, the angler should begin making casts in various directions again, some along the front edge of the east drop off, some into the grassy fingers up on the bar, some at isolated grass beds out on the shallow sand. Moving slowly and carefully, the patient shuffler should be ready to stop and stand when fish are found.

Eventually, the trail will lead to the shallowest part of the spoil, where stealth is most critical. Walking as slowly and quietly as possible, the savvy stalker will fish hard on this part of the trek, casting at every fishy looking spot, at any visibly nervous baitfish and at all wakes and swirls if possible. Sometimes, the biggest fish lurk right on top of ridges like these.

On the west side of the sand, casts should be sent at potholes near the edge of the drop off, also along the edge itself and eventually out to the isolated grass beds and potholes in the darker depths.

This kind of slow, zig-zagging, sideways approach to the direction of the wade and the casts will usually result in the angler figuring out where the fish are staged and inevitably in more fish caught when compared to a straight ahead downwind march. A boating angler with a trolling motor and Power Pole in light winds might accomplish the same thing, provided the boat will float over the shallowest part of the spoil. In high winds and more extreme terrain, the wader is likely to have more success than the boater time and again on this type of structural element.

The most important point is this: most anglers walk, drift and/or cast straight downwind too much of the time. Even when winds are blowing along the edges of structural elements, it is usually foolish to work straight downwind and cast along those edges, for two reasons. One, the fish are likely to be holding there, and passing through them is counterproductive, and two, casts made crosswind are often simply more effective than those made with the wind, especially with floating and suspending plugs.

Topwater lures fighting their way over the tops of waves don't look as realistic as those worked at angles to the chop. Corkies tend to swim a little deeper and with more variable speed when worked sideways to the wind, whereas they often jump in and out of the water when pulled straight over the waves, or into strong current.

Current can create another reason to cast sideways to the wind; fish almost always feed into the flow, so lures should be made to run with the tide, not against it. Often, doing so requires casting across or into the wind.

Casting, walking and drifting with the wind are easier than consciously working sideways to it and that's why so many anglers end up doing things that way. In my experience, the easy way is rarely the best way. The windier it gets, the more important it is to resist the temptation to simply allow the breeze to dictate the direction and speed of efforts made.

Consider the poor soul who's just hurried downwind right through a fish-holding gut, across a wide, muddy flat to fling many fruitless casts straight at a barren bank. When he turns and struggles back toward the boat with his arms raised across the bent rod behind his neck like Jesus dragging the cross, he sees that his buddy's hooked up. Under the singing of a persistent wind, he mumbles, "That lucky rat. He never covers as much water as I do, but he always seems to stumble right into the fish."