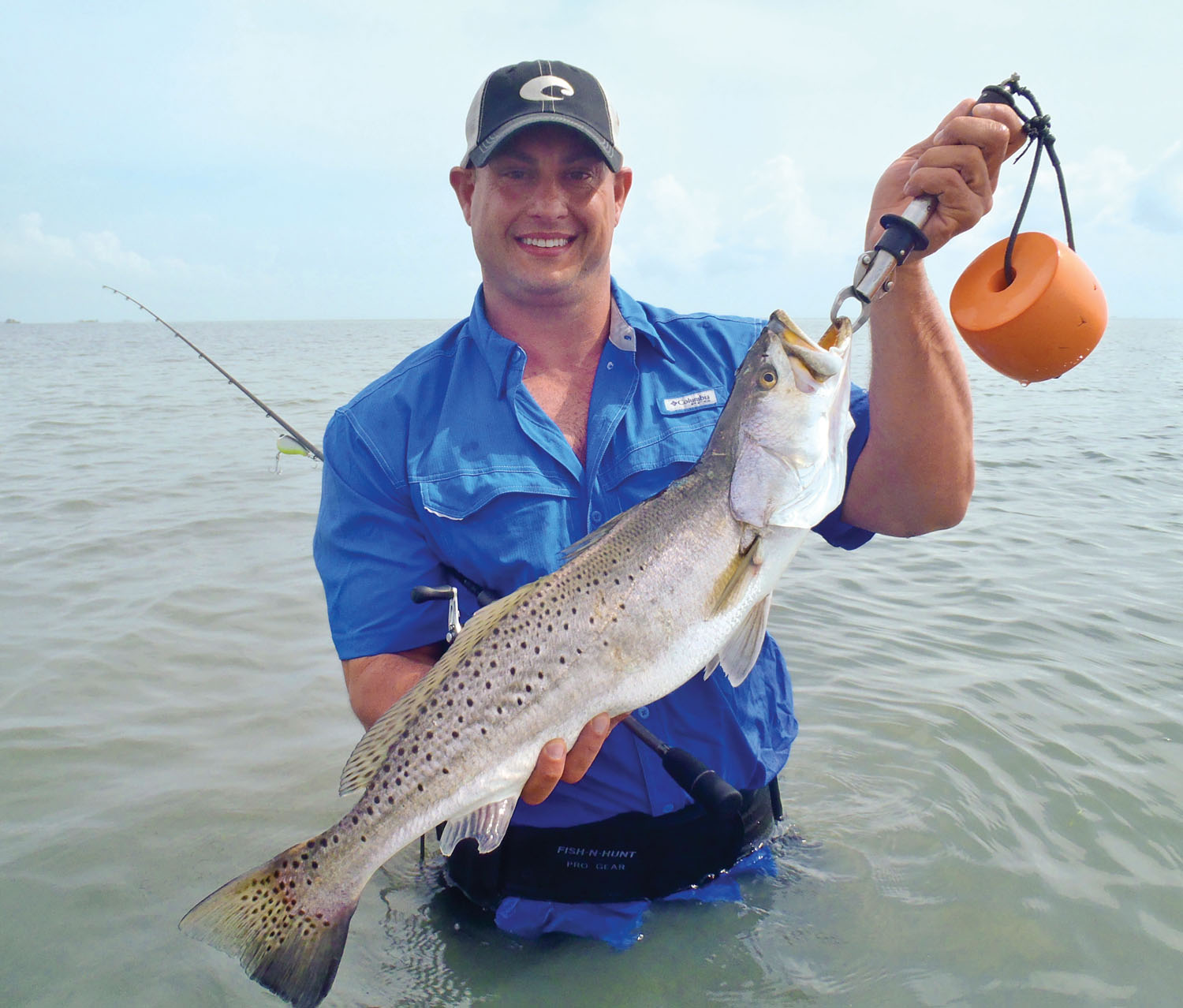 Mike Barnard caught several solid trout like this on topwaters and Paul Brown lures while fishing with the Captain.

Lure-chunkers who catch plenty of speckled trout in the middle of the sizzling Texas summer generally acknowledge how the heat affects the feeding habits and preferred locations of the fish. If seeking numbers, successful anglers target specks in places with shallow structural elements lying close to deeper water, especially where tide movements regularly influence the area. If they desire to encounter large trout, they fish shallower, often deploying tactics which allow them to see the fish before they cast.

Several types of places harbor the highest potential for catching numbers of trout when the red line threatens the top of the thermometer. In the minds of many anglers, the surf pops up first when contemplating where to catch plenty of summer specks. In the oxygen-rich waters fronting the narrow strip of sand lying between the mainland and the Gulf, anglers can stroll right into the ocean and experience fast action when conditions conspire to accommodate their efforts.

Calm or light onshore wind or light to medium offshore winds allow the waves flowing onto the beach to fall to heights low enough to allow for wading, and for cruising along in the boat, looking for signs of life, then anchoring among the sand bars. Particularly on the first two or three days after winds die and allow clear, green ocean water to lap gently onto the beach, potential for catching trout rises high. Tide cycles which dictate incoming flow in the late-night and early-morning hours place another trump card in the hands of anglers hunting hungry specks in the surf.

In the hour or so prior to first light, when the roar of waves rushing onshore reduces to a whisper, knowing anglers toss floating plugs and walk the dog in the shallows between the exposed sand and the first submerged bar, often while standing on the shore. As the sun climbs higher, the same anglers tend to walk into the water, casting their topwaters into the second and third guts, and working them more erratically if the bite frequency fades.Eventually, they work their way out to the deepest bar on which they can wade, sometimes switching to soft plastics as the lures of choice.

The basic plan of using topwaters early, then switching to soft plastics when the bite wanes, works well under the searing summer sun. Mixing up the pace with a topwater to include multiple speed bursts and pauses can delay the need for the switch to the worm, and on some days, sinking twitch baits like 51 and 52M MirrOlures and spoons work well after the fish become reluctant to rise and take floating plugs, especially if presented erratically, with speed bursts and pauses. But as a rule of thumb, switching to soft plastics and bumping them off the bottom works great once a topwater bite fades in a summer month like July.

These truths could certainly impact efforts made in another potentially productive place for catching specks during summer. The granite jetty systems lining the main channels connecting the oceans with the bays provide cover and structure which allow microorganisms and other diminutive creatures to survive in the dangerous waters of the world. Because they provide homes for the prey species, they become favored haunts of prowling predators like speckled trout. As shallow structures lying close to deep water with strong tidal influence, the jetties fit perfectly into the profile of productive places to target trout in hot weather.

Generally, weather windows which produce light winds and generate tide cycles offering four movements in a day provide the ripest potential for rock-hopping anglers targeting trout with lures. Any tide movement can create a steady bite along the jetties, but incoming tides in the morning hours create optimal conditions for catching, just like they do along the beachfront.An old saying rates the catching better on the Gulf sides of the granite walls when tides flow in, and on the channel sides when tides flow out.

In some places, wind conditions can render the saying obsolete. On the Bolivar Flats, which lie on the north side of Galveston's North Jetty, for instance, winds blowing due south or slightly west of 180 degrees will create favorable water and catching conditions, regardless of the direction of tide movement. I'm sure other conditions can nullify the general idea of fishing one side of the rocks or the other, like freshwater flowing through Sabine Pass, for instance.Certainly, every jetty system has sweet spots, where currents create enticing ripples which attract predators highly adept at taking advantage of the opportunities they provide.

Current rips forming around another type of structural element create feeding stations around which anglers will likely find snapping specks during the dog days of summer. Spoil banks, formed by dredging operations removing sediment from channels and dumping it alongside the deep ditches, provide such fish-attracting features. Anglers casting from the floating platform of the boat often catch plenty of specks in depths of six to ten feet, bouncing soft plastics off the bottom around subtle humps on the spoil banks when tides move at a medium pace.

In places like Ingleside and Indianola, wading anglers will find grass beds and shell banks within casting range of fifty-foot deep ship channels, but most anglers who prefer wading will find spoil banks lying adjacent to the Intracoastal Waterway more to their liking. Spoils which produce plenty of trout in hot weather, like the ones south of Baffin Bay, for instance, provide shallow shelves with deeper water nearby. They also generally lie in areas where regular tide movement influences the feeding mood of the fish.

Typically, trout make forays onto the shallowest parts of these spoil banks late at night, lingering over the sandy, grassy ridges or oyster-studded spines for a short time after the sun peeks over the horizon, then retreating to the deeper edges of the spoils as the eye in the sky glares more brightly. Acknowledging this, smart wading anglers avoid moving around on the shallowest parts of the spoils early, preferring to stand in deeper water and cast into the feeding stations, especially when rafted mullet and other bait fish huddle in tight groups in those places. Topwaters and slow-sinking twitch baits often coax plenty of bites during this part of the day, sometimes from specimens of above-average proportions.

As the sun climbs and heat index rises, the same anglers shift strategies, casting toward the edges of the shallow parts of the spoils, changing the pace, rhythm and movement patterns with their floating or slow-sinking plugs first, then switching to soft plastics if the bites become infrequent. In some cases, worms cast around the edges of spoil banks, into water too deep for grass to grow and to allow anglers to see the bottom, produce plenty of strikes under bright summer skies. As with most productive places, spoil banks have sweet spots, small parts which hold many more fish than others on a consistent basis. Consequently, smart anglers stand still and make repeated casts around places in which they urge a strike while fishing spoils.

In this way, fishing for trout on the spoils resembles fishing for them anywhere else; a trout striking in a place dictates a need to stand and make more casts close to the site of the strike.In another way, fishing for trout on spoils bears strong similarity to fishing for the species elsewhere; the biggest specimens often lurk in the shallowest parts of the area. With regard to spoil banks, this often means anglers catch more big trout off the shallow shelves and spines, in low-light conditions. In other places, a sun hanging high overhead facilitates the best chances for catching jumbo trout in the shallows.

Lure chunking anglers who catch big trout more consistently than most others do so partly because they fish shallower than most people most of the time. Surely, when water temperatures climb into the high-80s, some of the largest trout in a bay move toward deeper, cooler water, but some of them remain in water barely deep enough to cover their broad, dappled backs. Targeting and catching monster trout in shallow water during the heat wave of summer necessitates tactics which allow anglers to see the fish before they cast.

Often, wide expanses of shallow water hold a few big trout during hot months like July and August. Apparently, like the anglers who target them, these fish become somewhat lethargic, stressed out by the high temperatures. Surely, they do not generally show an inclination to actively chase and strike lures in situations like this. Anglers who manage to catch trout in excess of twenty-eight inches during peak summer months often succeed because they make repeated casts close in front of a fish after locating it by sight. These stubborn fish usually refuse to move even a few feet to take the lure, sometimes only striking when the lure passes within inches of their nose.

Determined anglers who either wade or make slow, controlled drifts through clear water less than eighteen inches deep can find and catch a few monster trout long after most trophy hunters have given up the drill for other pursuits. This strategy produces better than simply heading into shallow areas and making many casts blindly, hoping to locate an isolated trophy. Since their numbers in these places become scant compared to months with moderate water temperatures, they can prove tough to catch with a generic plan which simply involves making a persistent effort in the shallows.

This fact partly explains why many anglers who target trout in mid-summer months prefer to fish for numbers, abandoning the idea of tackling a trophy. Generally, locating and catching plenty of eating-sized specks in summer proves pretty easy for anglers who pay attention to the precise timing and location of their efforts. Basically, this means targeting them in places which provide water of various depths, and doing so when the tide rolls, tossing floating plugs in the shallows early, then hopping soft plastics around in deeper water as the sun rises higher in the sky.