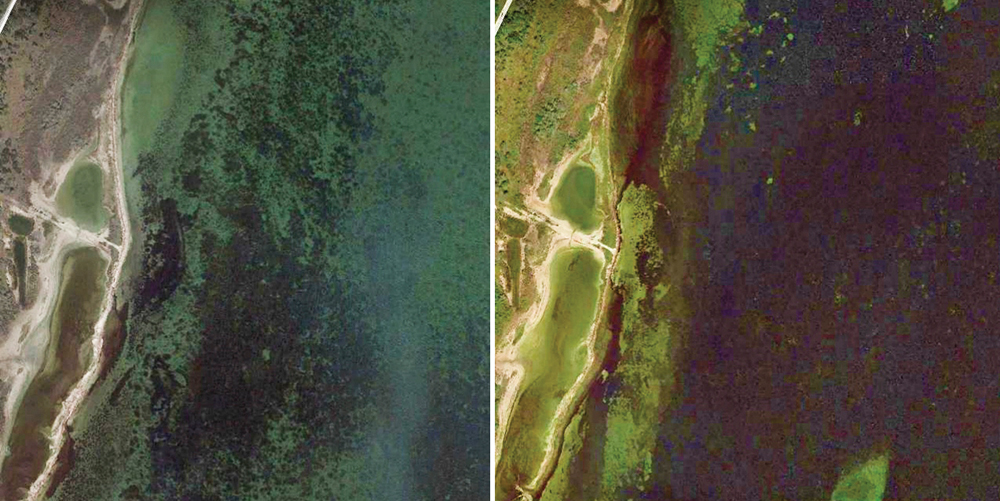 These two Google Earth images, one from 2009, the other from 2014, reveal both similar and variable features along a stretch of shoreline in the Upper Laguna Madre.

Locating and catching trout and redfish along shorelines lacking obvious features like cuts, drains, lakes and coves can prove challenging. In some situations, making observations while moving at moderate speed in a boat will provide all the information necessary to start a potentially productive effort. In other scenarios, intimate knowledge of subtle aspects of the topography of the bottom extending out from the shoreline proves much more useful and necessary.

Under the light of the sun, anglers often find fish along stretches of apparently homogenous shoreline after seeing evidence indicating their presence. Most commonly, rafted or jumping mullet, menhaden, glass minnows, needlefish or other forage species reveal hungry hunters close on their tails. Sometimes, the predators show themselves by gathering in large groups at the surface, pushing wakes.

Of course, when trout and reds herd shrimp to and through the surface, where waiting gulls squawk and dive, catching fish on shorelines lacking obvious features proves easy. Slicks perfuming the air with the scent of fresh watermelon also lead observant anglers to schools of feeding predators. In other cases, in the absence of these indicators, anglers traveling aboard boats specially equipped to allow them to see into the water locate trout and reds by riding along and looking for them, particularly in places holding water clear enough to facilitate such a plan.

Boaters “burning” fish and returning to try and catch them don't really need to know much about the features lying on the bottom of the area in which they make their efforts. They catch plenty of fish in situations and places which allow effective use of their observation method. But when conditions conspire to render burning obsolete, studious anglers who use their knowledge of the area will have a better chance at consistent productivity.

Cloudy skies, murky water, lack of wind and other factors occasionally (or in some places regularly) render observation strategies worthless, or nearly so. For instance, extremely cold water temperatures tend to slow fish down and send them close to the bottom in relatively deep water, creating problems for those wishing to use visual signs to locate schools of fish.

Of course, locating even scant numbers of prey species along a shoreline in winter can lead observant anglers to the mother lode, but relying on such a method on a daily or hourly basis in cold weather might cause anglers to run around chasing their tails in a quest to find something that does not exist. In any situation where meager signs provide evidence of the presence of feeding fish, anglers with the most extensive knowledge of the sweet spots along a stretch of shoreline stand a much better chance of executing productive strategies.

Some anglers have difficulty identifying sweet spots along shorelines which appear homogenous when scanned superficially from a boat passing along at a speed sufficient to maintain the craft on plane. Locating productive places from the boat proves easier when the searching captain slows down to idle speed. Ideally, one performs this kind of low-speed search after doing some research in the home office.

Cross-referencing data on bay maps with images found in Google Earth often provides a good starting point for anglers hoping to solve the riddle related to the location of productive spots. When working on this puzzle, one should start by considering the generalized truths or “big picture” elements first. This means looking at the basic geography of the shoreline in question, primarily its orientation on the map.

A shoreline protected from strong northwest winds will take a beating from sustained onshore winds. Conversely, a shoreline providing refuge from persistent onshore winds won't hold up well under Jack Frost's frigid assault. These general truths provide a basic idea of when to consider fishing a specific shoreline, but they don't really provide evidence of which parts will likely hold fish when conditions favor trying them.

Looking at the big picture means considering more than the basic orientation of the shoreline; it also involves awareness of where the depth changes occur at a distance from the shoreline, and where the shoreline sits in relation to deep basins used by the fish in extreme weather conditions. Generally, stretches of shoreline lying close to deep basins or channels provide higher probability of producing well in extreme conditions than stretches lying farther from the same features. This truth rings particularly loud in winter, so stretches of water lying close to a deep harbor or basin along shorelines offering protection from nippy northwest winds offer prime potential when water temperatures dip down low.

Fish tend to roam around more in warm weather, while they hunker down and remain less mobile in cold weather. Especially when fish move around regularly, they can appear and feed anywhere along a shoreline. That's why observation methods work well to locate fish in the warm seasons. But when fish show stubborn allegiance to specific small areas along a shoreline, knowledge of the location of these places becomes critical.

Often, locating small-scale sweet spots means identifying the subtle features related to cover and structure elements present in the shallows along a shoreline, using Google Earth in conjunction with observations made at a snail's pace. Stated another way, working within the small picture means identifying anomalies of various kinds, ones which can't easily be seen at distance or when the observer moves past them at high speeds. Depth changes measuring in mere inches can create productive sweet spots.

Anglers generally must use their feet to locate depth changes of such low measurable magnitudes. Wading through an area with a keen purpose helps one achieve this goal. While this technically involves observations made with the tactile sense, I place it in the knowledge category, because it must be done slowly and methodically, not while zipping around at the helm of a modern bay boat.

While wading stretches of shoreline in hopes of locating places with subtle guts, moguls and ridges, savvy anglers also note the locations of places where bottom consistency changes.Often, sweet spots occur along seams where hard sand gives way to soft mud and/or where scattered shells create a crunchy bottom, adjacent to either bare sand, mud or grass. This concept relates to an underlying truth of high significance in this quest; areas with multiple cover elements lying on the bottom generally produce more consistently than areas with a homogenous bottom.

In places with relatively clear water, anglers effectively using Google Earth can identify stretches of shorelines with various cover elements on the bottom. In bays with plenty of live grass beds, this means looking for stretches with some grass and some bright spots, which might be either hard sand or soft mud, or both. In bays holding abundant oyster reefs, the search might be for stretches with patch-reefs lying in close proximity to either sandy areas or grassy patches.

Along a shoreline like the one bordering the famous King Ranch, the search involves looking for stretches which hold up to five major elements—mats of rotting grass piled against the bank, sand, mud, rocks and live grass beds. Of these elements, grass mats, sand and live grass stand out better than the others. The smartest plan for identifying spots holding various cover elements starts with looking at the most recent images and moving back in time through use of the Historical Imagery tool.

Using the View menu on Google Earth, one can access all the images captured for an area within the data base, by selecting the Historical Imagery tool. By looking at past images, one can determine whether a sweet looking set of potholes in a recent image generally occurs at or near the coordinates over time. Areas with an obvious mix of sand and grass year after year often contain one or more of the other elements mentioned above and provide greater potential for productivity than areas without such variability in bottom cover.

After identifying a few stretches which visibly show variability in cover elements, studious anglers can test the bottom with their feet to check for the presence of other elements which don't show up so clearly in the software. While doing so, anglers should keep their eyes and minds open and look for everything which might potentially create some advantage for predators over the species they seek to eat. Even a tiny drain or cut in a grass line, or a depression allowing water to gather atop a grass mat can offer predators an easier chance to ambush their prey than areas without these types of features. Over time, anglers who precisely record the locations of places where they find the right elements and where they catch fish will recognize consistently productive sweet spots.

One cannot find these kinds of places while wearing goggles and pressing the throttle of a high-powered outboard fully forward. Observant anglers find trout and reds along apparently homogenous shorelines by using their eyes and noses when the predators feed actively, and conditions favor ease of observation. In other situations, anglers with the most intimate knowledge of the subtle features present along a stretch of shoreline stand a better chance of locating and catching fish by focusing on proven sweet spots. Captains with the best track records understand when conditions favor the execution of a search and when they dictate the need to head straight for known productive places.