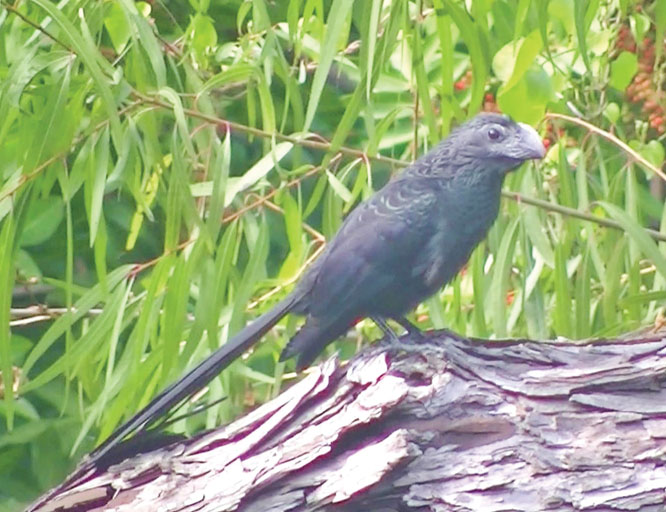 The Groove-billed Ani looks quite similar to a Grackle at a distance, but is uncommon, and thus a prized sighting for avid Texas birders.
Over the course of the last few years, I've developed quite a passion for going out into the wild with the express purpose of watching and filming birds. Some might refer to my enthusiasm for birding as an obsession! They would likely cite as evidence the fact I've shot over 10,000 video clips of birds since 2011.

As I learn more about the vast array of winged creatures we have the opportunity to observe in South Texas, I also gain knowledge about the processes which best facilitate seeing and documenting them effectively. I've come to realize my birding obsession and my fishing one share several common aspects. Analyzing those structural similarities leads to some important conclusions.

At a basic level, people participating in these two activities place highly variable degrees of importance on them. At one end of the spectrum, some view birding and/or fishing as purely a leisure activity. Most likely, they spend relatively small amounts of time participating, and do so casually, without much thought or planning. Conversely, others take these avocations much more seriously, placing them in the realm of "sport" or "artistic pursuit". Such fanatics regularly participate, operating from a thoughtful and educated mindset.

All experts in both these fields share common traits and attributes, and they make choices which help them carve out a niche in the two "communities." People who excel at these activities rely heavily on their knowledge and skills over the long term, though luck plays a huge role in their daily triumphs and failures.

Both birding and fishing experts possess a thorough and accurate knowledge of the layout of the area in which they "work". Top-notch birders not only know the location of all the acknowledged best sites for seeing birds in their city, county and region, they also find other, unknown spots which regularly produce opportunities for them. Similarly, expert coastal anglers know all the famous sweet spots and productive areas, but they work to develop a list of personal hot spots too.

In both cases, the knowledge of the areas, spots and sites reaches well beyond the superficial level. These experts learn and remember specific details about the places, including where the micro sweet-spots lie in each. Since vegetation, both in water and on land, varies in coverage seasonally, they also recognize the need to keep up with changes to the layouts of the sites. This extensive knowledge of the places where they find their birds and fish allows the experts to make different choices, based on their priorities.

Some people prefer an "eclectic" approach, tailoring their strategies to allow them to "capture" or "get" as many species or individuals as possible. Those who operate from this perspective often select an area or areas based on their perception of where lots of activity among various species will likely occur. They generally deploy catch-all methods to achieve their desired goal. Anglers often choose live bait and either fish out of the boat, or wade along steadily, covering water in attempt to encounter more action.

Birders operating from this mindset also tend to stay mobile, driving along slowly, or taking a hike down a path through the place, continually scanning the area for signs of life with their binoculars as they go. Success for them is often measured in a list, in a count of total species and numbers of individuals seen.

Other birders and anglers, however, use a detailed understanding of the topography of the places they visit to target certain species more effectively. Anglers who know where sweet spots in reefs lie, and how those spots funnel water during different phases of the turning tide sometimes stand and grind for long sessions in small spaces. Similarly, those who target fish among sets of rocks or potholes lying in the grassbeds don't attempt to cover long distances while trying to catch their fish.

They won't troll for a wahoo in a marsh drain, and would never target a flounder under a shrimp boat miles offshore. They recognize exactly where to target the fish they prefer to catch, focusing on the shallows atop a sand bar when trying to catch a trophy trout, for instance, rather than casting into deeper waters off its edge.

Birders interested in documenting a particular species also recognize the need to focus their efforts in specific parts of the areas they visit. They would never look for a Sora while driving down the beach, and they know they won't see a Magnificent Frigatebird while looking down among the reeds in search of a Swamp Sparrow. Not only do these folks select parts of specific sites to improve their odds of getting the birds they want, they also use methods which increase the likelihood.

One who's on a quest to photograph a Marsh Wren will likely sit still and observe the shadows at the base of stands of canes without moving around much, listening for the gurgling trill of the tiny bird they seek. Those motivated to catch a trophy trout might plant their feet and make repeated casts to a proven, productive set of potholes tight to a grass mat, hoping to place a lure within a cruising sow's sight in such a way to motivate her to take a bite.

Once a birder or angler makes this type of decision, the need for focus and a persistent attitude plays a prominent role in their ability to succeed. While waiting for the Sora to come out of the shadows, motivated birders won't become distracted by shooting footage of the Coots crawling around under their feet. Similarly, the angler who's attempting to pull a big trout from the shallows atop the bar won't cast at a redfish spotted cruising in the area.

While making the often prolonged, focused effort, experts targeting particular species or certain members of a species will benefit from high levels of readiness and grace under pressure. When plans pan out, things happen quickly; those anticipating the action best take advantage of their opportunities. Anglers will have their drags set properly and will remain ready to fight their fish accordingly.

Birders do similar things while waiting for the objects of their obsession to reveal themselves. I sometimes find it necessary to point the camera at a particular part of the foliage in front of me, so I will know exactly what direction to move when scanning for the bird in the viewfinder once I see it. Otherwise, I often find myself confounded by an inability to locate the specimen with the camera once it appears.

Strategies like these help one maintain composure and show grace under pressure. In cases where people have tried for many hours, days, or even years to "get" a particular species or specimen, excitement often leads to bumbling, fumbling and stumbling. Clumsy behaviors do not enhance the potential for a positive outcome. Mostly, trophy seekers benefit from quiet, slow and purposeful efforts. Hastily moving toward where a movement potentially indicates the presence of the target or carelessly flailing the equipment around inevitably reduces one's chances to succeed.

Whether fishing or birding, experts in these fields tailor the equipment they carry to suit their specific needs. Most birders carry binoculars and many carry a camera of some sort. Those attempting to take close ups or shots of raptors at long range recognize the need for a strong, zooming lens and a tripod or similar device to steady the camera. Anglers also choose tools which allow them to target species effectively, using a wide range of things, from lanterns and gigs to long, whippy rods which allow them to serve tiny flies to finicky bonefish they see in clear water on shallow flats.

Both anglers and birders know to use both their ears and eyes to maximize productivity. It's often possible to find both fish and birds by hearing them first, then searching them out in the direction from which tell-tale sounds emerge. Sometimes, anglers use the sounds birds make when hovering over schools of feeding fish to locate those fish, for instance. At other times, birders use the songs of similar birds like the various Kingbirds to differentiate one species from another. Understanding the meanings of various, subtle sounds allows these experts to accomplish their tasks more consistently.

Internet sources help these folks in their endeavors in several, related ways. Anglers on fishing websites and forums give each other information about where they are catching fish. Birders do the same on sites like eBird, which even allows members to sign up for alerts, so they can be sent emails when others spot a targeted species at some location close to them. Various sites and groups allow anglers to post pictures to show the world what they've captured and caught and seen.

Ironically, birders almost always view these things positively, and seem to relish the idea of helping each other find and get new species and more birds, while at home or out in the field. It's not unusual for one birder to call another over and move aside so they can both see the same bird. Anglers, on the other hand, tend to be more "territorial" and secretive, normally offering up more generic advice about locations on the web, or perhaps limiting their comments to a pattern that's been working. When on the water, most fishermen would certainly not wave strangers into a spot to join in the catching!

Birders and anglers share a tendency to develop both positive and negative attitudes towards particular species. Anglers use all sorts of endearing terms when speaking of their preferred species, but refer to inedible fish like hardheads, skipjacks and other species as "trash fish". Some birders use the phrase "good bird" to refer to a species they deem unusual, or worthy of their attention, but call species like Grackles and Cowbirds "bad birds". With birders, negative attitudes normally spring from one of two things–either the widespread abundance of the species or some behavior it exhibits, one deemed undesirable by human beings. Cowbirds, for instance, practice nest parasitism, meaning they leave their eggs in other birds' nests, abdicating the responsibility to raise their own young.

Perhaps the most troubling similarity between birders and anglers is their tendency to think of the wild creatures which serve as the objects of their obsessions in human terms. People in both avocations tend to "humanize" or at least "mammalize" the fish and birds, giving them far more credit for having intelligence and for possessing a moral compass than what they have. Birds and fish, generally speaking, are animals with low levels of intelligence. Certainly, they cannot feel guilt or remorse like we humans do.

People who become angry with a Seagull for leaving a mess on the hood of the pickup, or who cuss a Stingray for ingesting the dead shrimp they threw into its midst make a mockery of these two potentially noble pursuits. Such attitudes undermine what I perceive to be perhaps the most significant similarity shared between birding the fishing--the tendency of both activities to elevate the respect and admiration humans have for other species.

Author's Note: I'd like to correct a detail from last months' feature. I mistakenly stated that Cliff Webb and Doug Pike's now-famous outing occurred in February of 1996. I had the month right, but the year was 1994, two years before Jim Wallace caught his then-state-record specimen.