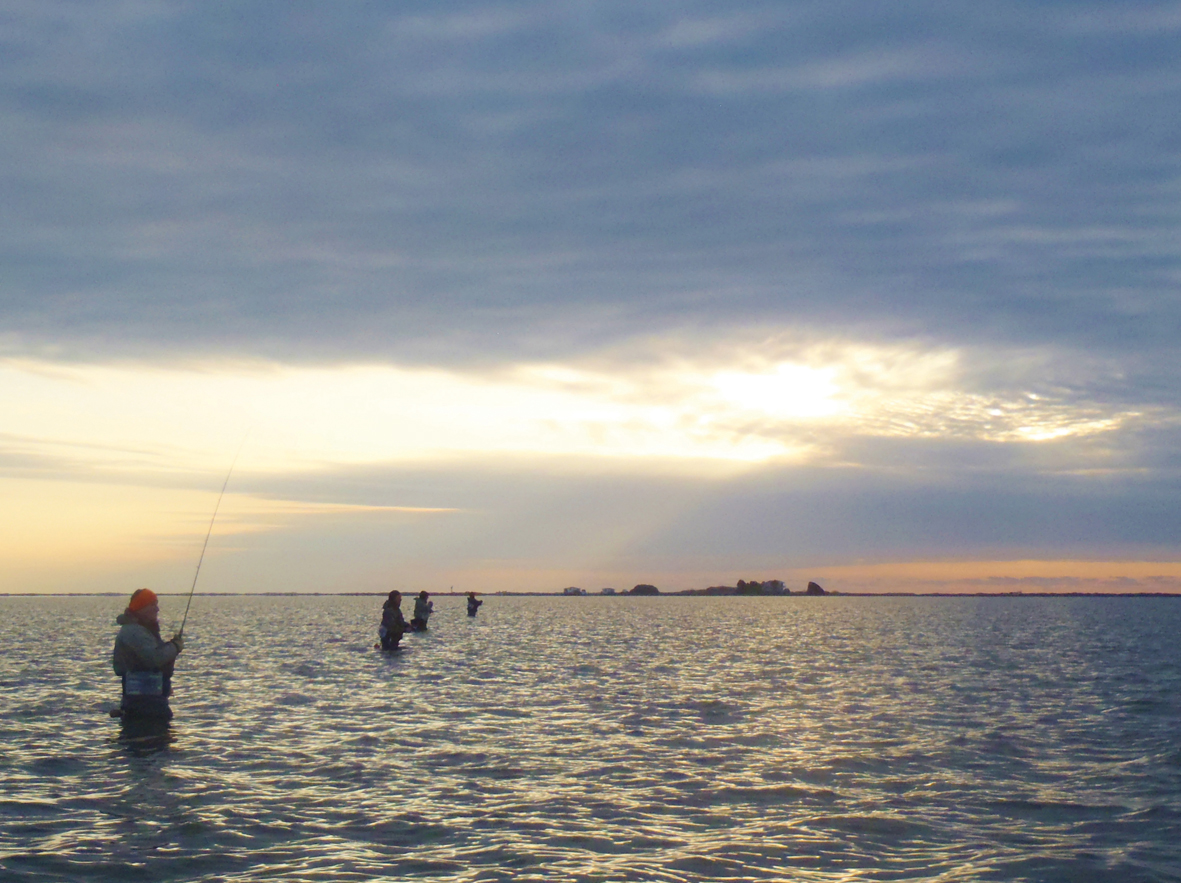 I've watched many fishing shows on television, learning plenty from some, while scoffing and snickering at others. Episodes in which people attempt to catch trophy speckled trout with lures, of course, tend to pique my interest the most. I recall one I saw several years ago.

The two famous Florida-based anglers hosting the show normally target other species, but chose this time to try and catch my favorite fish, large ones at that, and they stated they'd throw sinking twitch baits and topwaters primarily. All of it sounded interesting to me. I remember thinking, "Let's see if these guys really know what they're doing."

I smelled the first rat when they acknowledged they'd be fishing water shallow enough to wade, but would do so while standing on the deck of their boat. I know their choice made the cameraman's job easier, but they clearly did not display a preference for getting in the water anyway, despite the warm weather which would have allowed them to wade wet without any discomfort. I counted their choice as strike one in the credibility game.

The two anglers first tried throwing conventional floating plugs at the fish without much luck, then decided they'd likely entice more strikes on slow-sinking twitch baits. They pulled out and tied on some lures with which I'm quite familiar. I am fond of many of MirrOlure's twitch baits, including the Catch Five and MirrOdine, the lures of choice for our two experts.

I watched them throw the lures out and listened as they explained how to use them, and they soon chalked up strike two. I quickly realized these captains did not have much experience using the lures, or they would never attempt to teach someone to present them the way they did. I noted they twitched their rod tips without turning the reel handles on the spinning reels they held, then stopped twitching altogether, to quickly reel up slack. "Dang," I mused, "I've been trying to break people of that habit for years."

The anglers did eventually catch a handful of fish, some of which were trout, one of which stretched to about 21 or 22 inches. When they attempted to pass it off as the kind of trout they had set out to target, as a "trophy" trout, I rang up strike three and found some other programming to watch! No way these guys should ever have ventured so far out of their fields of expertise to film that day's show; they documented their inexperience and lack of real skill to anyone educated enough to know the sport.

I share this story for a specific reason here, to caution the reader to think carefully about any source's credibility when seeking out information or tips about a specialized form of angling. Listening to the advice of people who have limited experience with a specific method or with targeting and catching a particular kind of fish potentially leads to frustration and confusion in the end.

With regard to the aforementioned show, I found the angler's demonstration of their preferred techniques with slow-sinking twitch baits especially troubling. I've caught thousands of trout bigger than the three pounder the guys landed on their show on lures like the Catch Five and MirrOdine, and have published substantial written discourse attempting to explain how I like to present them to the fish. I've also created video clips to demonstrate the techniques. I would NEVER advise anyone to deploy them the way the two guys on the show did.

People regularly ask me to give them advice on fishing lures like Paul Brown's Lures, and pose questions like, "How are you throwing that lure in such shallow water without getting hung on the grass?" and "Why can't I keep my Corky under the surface like you?" and "What is the secret to getting more bites with these lures?"

Over time, I've identified the two main elements critical to effectively presenting slow-sinking twitch baits in the manner I prefer, one which closely resembles the way most anglers use conventional, cigar-shaped topwater plugs. In the following paragraphs, I'll attempt once again to describe these elements, using some new ideas, which have recently come to mind.

First, an angler must learn to twitch the rodtip while reeling at the same time. The rodtip moves the lure, while the reel handle serves to control the buildup of slack in the line. I have previously described the turning of the reel handle as "slow and steady", but upon closer scrutiny, I realize I (and others who've mastered the technique) don't turn the handle steadily while we twitch. Instead, we make partial turns, kind of like making a triangle with our hand, each movement equaling about one third of a complete revolution of the handle.

In essence, each partial turn of the reel handle serves to take up some of the slack created by each twitch of the rodtip. The timing of the twitching and reeling takes on a rhythm, one I don't consciously think about, but which comes about naturally. The development of the timing and rhythm of this twitching and reeling makes the presentation work, imparting a side to side movement in the head of the lure, while allowing the angler to control the depth of the presentation too.

In order for this to work, the rodtip must pass back and forth through a fixed point, not move around over a long range, rising high over the angler's head, then dropping back out in front again. Interestingly, I begin each series of twitches with a downward stroke, to throw slack. So, the cadence of my strokes would sound like this: Down-Up, Down-Up, Down-Up.....And I do make ten, twelve or even more strokes in succession at times, not just two or three or four.

People who struggle to master this process do so because they stop turning the reel handle once they start twitching the rodtip. The cadence of their strokes would sound like this: Up, Up, Up......(dropping the tip to repeat while reeling up slack).....Up, Up, Up....(repeat). Instinctively, someone who begins twitching the rodtip without turning the reel handle will also begin lifting the rodtip to control the slack. They will make upward strokes in succession, without the offsetting downward strokes in between.

Eventually, said angler will have lifted the tip of the rod far enough to reach what I call a "fundamentally unsound angling position," one where the butt of the rod lies closer to the lure than the tip. Once an angler reaches such a point, they will inevitably realize they've lost leverage, and consequently lost control of the lure, and they will return the rodtip to a point in front of them, closer to the lure, while taking up slack. Critically, this action causes a loss of control of the depth and movement pattern of the lure.

I've demonstrated and narrated all this to people many times over. Some respond favorably and begin getting the hang of twitching and reeling rhythmically, keeping the rodtip in front of them and passing it back and forth through a fixed point, while others have tremendous difficulty mastering the technique. A person who's spent lots of hours "walking the dog" with a topwater tends to get the hang of it much faster than one who's spent decades fishing with soft plastics.

If I'm fishing a sinking twitch bait in fairly deep water, say waist deep or more, I sometimes find stopping the reel handle and allowing the lure to slowly sink after a series of twitches does prove effective. In fact, such a presentation won favor with me soon after I started using these types of lures nearly two decades ago. Significantly, I thought of them as specialty lures back then, for use in cold water, to coax strikes from lethargic fish found in water barely shallow enough for wading.

I no longer think of these lures in this limited sense. Slow-sinking twitch baits can and do work well during all seasons, in both cold and hot water, though they generate the most strikes in the mild seasons and moderate water temperatures. As with other lures, I fish them faster, with more erratic presentations in warm to hot water, and slower, with more subtle movement patterns in colder water. Most importantly, slow-sinking twitch baits allow for presentations of an appropriate speed in shallow water, where I often find myself targeting trophy trout.

This family of lures revolutionized the sport specifically for that reason; they prove supremely effective when used in water depths ranging from less than two feet up to about three feet. Their effectiveness does, of course, depend on the skill of the angler deploying them. People who can't learn to reel and twitch at the same time should probably forget about throwing these types of lures, and choose something they can control better.

Furthermore, anyone trying to master the effective use of these plugs should emulate others who demonstrate mastery with them, not listen to the advice of people with limited experience using them. We all know you can't believe everything you see or hear on the internet. Apparently, you can't trust all the advice you get from fishing pros on television shows either!