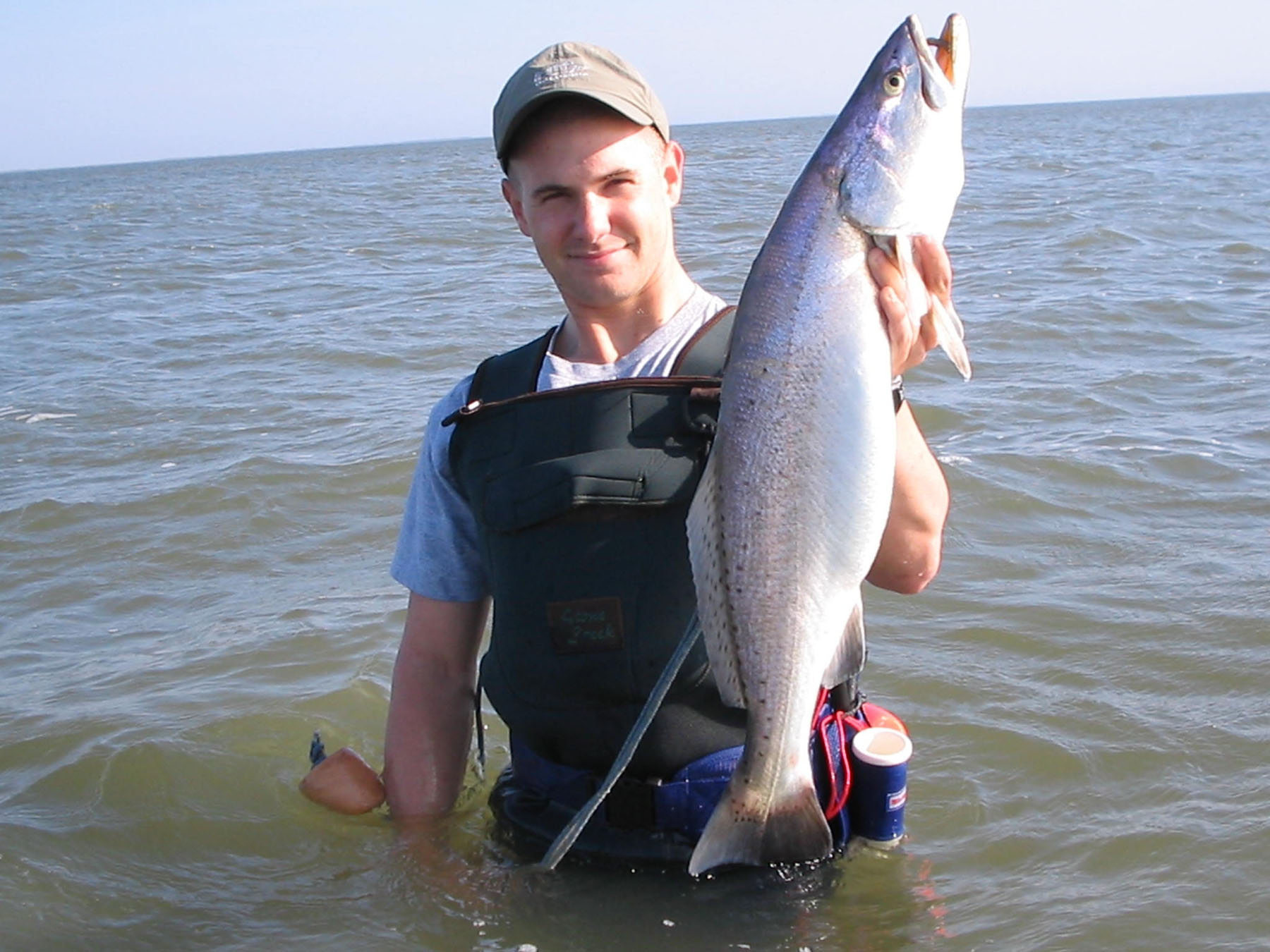 I'm often asked to name the lure I'd choose if I were limited to using only one, and that's a relatively easy question to answer. Truth is, though, that I like to use many different devices to trick our native seatrout, depending on the fishing conditions and situations. Below, I've generated a list of ten lures that I consider essential; all have produced trophy trout for me and my clients. The list starts with a large floating plug and ends with a bottom-hopping worm. I wouldn't feel secure without these weapons in my arsenal and I believe trophy seekers who use them regularly will likely come to understand why.

The first plug on my list is a bone Super Spook. I refer here to the Heddon model, which has a brighter white color than the original Excalibur one. This lure has probably accounted for more of my big trout than any other. These days, I rig it with a size five stainless split ring on the nose and two number one red trebles or 3/0 Mustad Ultra Point single hooks. (When using single hooks, I use two split rings to hang them.) Anglers who choose to utilize all three hook hangers prefer size two trebles. A mullet imitator, this noisy plug is best when trout are on an aggressive feed, especially if the available forage is limited in variety. Chunking a bone Spook deep into the dense mists of a February fog and working it in a rhythmic, steady, medium-paced walk is a fun way to exercise the heart, the ears and the eyes! When a motivated magnum sow decides to eat this offering, she often does so with an impressively acrobatic and deadly intent. Alternate effective colors in the Super Spook clan include anything with a white belly, baby bass in ultra clear water and black in stained depths or on a pitch dark night.

My next must-have plug is a pink Skitterwalk. Shorter and fatter than a Super Spook, it can be worked faster and with more of a skimming action. The high pitch of its pleasant ping works in harmony with quick, erratic presentations. I rig it with a size five stainless split ring on the nose and number one red trebles or 2/0 Mustad single hooks. This bright plug seems to outfish the Spook in the spring and summer, when the fish want a speedy presentation and smaller forage fish are present. Other appealing colors in the Skitterwalk family are the baby trout, the chartreuse/silver and the pearl, which begs for custom paint and markings.

The third lure on the list is a sleek little "finger mullet with bad hair", the "hothead" Super Spook Jr.. Bright white on the bottom and back with a clear, shiny side and a hot pink head, it's a flashy little producer. I adorn it with a size three ring in its nose and number four trebles or 1/0 Mustad single hooks. In the warm months, when lots of tiny forage fish are present and when trout feed more often, this diminutive plug sometimes seems to outdo its larger cousins. It can be worked with plenty of speed, which can be the ticket to more bites in warm waters. Alternate colors for this necessary lure include bone and chartreuse.

One more floating plug makes it onto my list of required tools. It's a shad or pinfish lookalike, a Spit'n Image. I add number four red hooks and a size three ring to the nose when I take one of these out of the box. Pradco makes many natural color patterns in this lure; most are white with a dark back. This bantam bait works best when tossed deftly into gin clear, super shallow and calm waters in which aggressive fish are actively searching for a meal and can clearly see what they are attacking. In places where shad and/or pinfish are abundant and when the fish are shallow and tough to trick on the bigger floaters, the lifelike Spit'n Image can be the best way to coax a big bite. I have also used it as a fish finder, starting with it to prove that the fish want their meal served on top before moving to bigger plugs.

When the fish don't want their meal on top, but the water is shallow, clear and calm, the fifth lure comes out of the box. It's a Corky Fat Boy, pearl with a black back. Like the Spit'n Image, it is a dead ringer for a shad or perch, but it doesn't float. I prefer the old style one without a rattle in the spookiest waters, so I can slip it into skinny potholes and swim it silently out. I use it just the way it comes out of the plastic bag, without a nose ring and with the number four trebles. I like to "walk the dog" just under the surface with it, twitching the rodtip six or seven or more times to get it wobbling, then pausing to reel it slowly straight in. If it gets a little windier, the pearl/black rattling Fat Boy begins to make more sense. Other favorite colors of Fat Boys are pearl/chartreuse, silver hologram, dayglo and pink.

Mandatory plug number six is an original Corky (rattling version). When fishing waist-deep or deeper waters somewhat churned up by the wind, I prefer a "regular" Corky, most often in the enticingly cool green color its inventor Paul Brown dubs dayglo. The rattling version of this one is preferred because of the background noise generated by the breeze. I'll use a similar technique with this finger mullet imitator as I did with the Fat Boy, walking the dog under water with it and alternately reeling it straight in. Often, I give my rod tip quite a sharp shaking and use more speed than some Corky lovers, especially when fishing moderate water temperatures, targeting fish that are pretty aggressive. No alterations need to be done to this plug; it works great straight out of the package. Other effective Corky colors include silver hologram, pearl/chartreuse and pink.

When fishing brown tide or other stained waters in situations where fish aren't likely to blow up on topwater plugs, I favor number seven on the list, a Mirrolure Catch V. It is louder than a Corky and its sides have greater reflectivity, making it easier for fish to find. My favorite color in this plug is gold/chartreuse, which seems to shine nicely through the brown slop. I put a size five split ring in the nose to go with its red hooks; sometimes I give it tiny black dots and a red feather trailer. This noisy slow-sinker I shake vigorously with the rodtip, but my reel handle turns slowly. I use the hard shaking to activate the raspy rattle and get the attention of the fish and the slow reeling to allow them time to home in on it. The biggest trout I've caught on this one have bitten in winter, but it will work as a Corky "substitute" any time the water is off color. When throwing a Catch V in clear water, I like the green/gold/white color pattern.

Another sinking plug takes eighth place on the list. It floats when it hits the water, but dives and wobbles when retrieved. It's a Bomber Long A, broken back version in blue/silver. I find this lure to be most worthy in spring when fish want a sub-surface offering moved at high speeds. The faster you work a Long A, the deeper it runs. Perfect for throwing over rocks and other structures in three to four foot depths, it will dive down and contact the bottom, then lift off again when stopped. This swimmer will allow for fishing areas with lots of dead grass on the surface, as it runs under the rafts but stays off the bottom if retrieved at the right speed. I use it primarily in moderate water temperatures and windy conditions in which I experience a good topwater bite that suddenly shuts down. Unlike some who simply reel this diver in at variable speeds, I like to crank it down with the reel handle after it hits the water, then make intermittent short jerks with the rodtip to cause the lure to wobble erratically, reeling slowly between twitches, waiting for the often vicious strikes it solicits. I add a size three split ring to the nose of this "crippled minnow wannabe" and replace the factory hooks with number four red trebles. The non-jointed version of this plug is deadly too, notably the green and silver one, to which I add baby trout dots.

The ninth lure on the list is the first of the soft plastics. It's a Norton Shadtail in red and white. When the fish are too finicky to strike at larger fish-imitating plugs, the old paddletail can often save the day. Soft plastics work in all seasons, but are most important to me in catching trophy trout in the heat of summer and dead of winter. Resembling a finger mullet, shad or other small fish, it should be made to swim with less vigorous twitching action than used with a rat-tailed worm, which makes it perfectly suited for running under floating grass and over bottom snags. I rig mine on either a sixteenth or eighth ounce jig head, depending on the water depth and season. Shallower and colder water generally calls for the lighter head. Other proven paddletail colors are pumpkinseed/chartreuse, white/pink and white/chartreuse.

Pumpkinseed/chartreuse is the color of choice on the last lure on the list, an Exude RT Slug, with its slender, winged rat tail and scent-trailing, slimy body. Generally, I prefer a rat-tailed worm over a paddletail in relatively calm conditions, or when the fish are focused on shrimp or eels rather than small fish. Again, summer and winter are the two seasons in which the worm is best for producing big trout, especially in the heat of the afternoon or under a post-front bluebird sky with ballooned barometer. I like a light jighead on my Slug, either an eighth or sixteenth, unless I'm fishing waters over four feet deep or in strong currents. A sharp hopping and dropping action works best, since this bait is meant to imitate a fleeing shrimp or eel. Other colors I keep are bloody white, bubblegum, morning glory/chartreuse and pearl/silktreuse.

All of these lures have tricked big trout for me. If I were forced to use one all the time, I'd pick the RT Slug; I believe a rat-tailed worm will probably catch fish more often than any other on the list. Of course, if I had to name the lure I most enjoy using, it would be the Super Spook. It's all too easy to become addicted to the blow ups it entices and to get tunnel vision on floating plugs. What's much more challenging and rewarding is to learn to properly read the conditions of the moment and to consistently offer the fish what they are willing to eat. In that endeavor, I find these ten lures hard to beat.