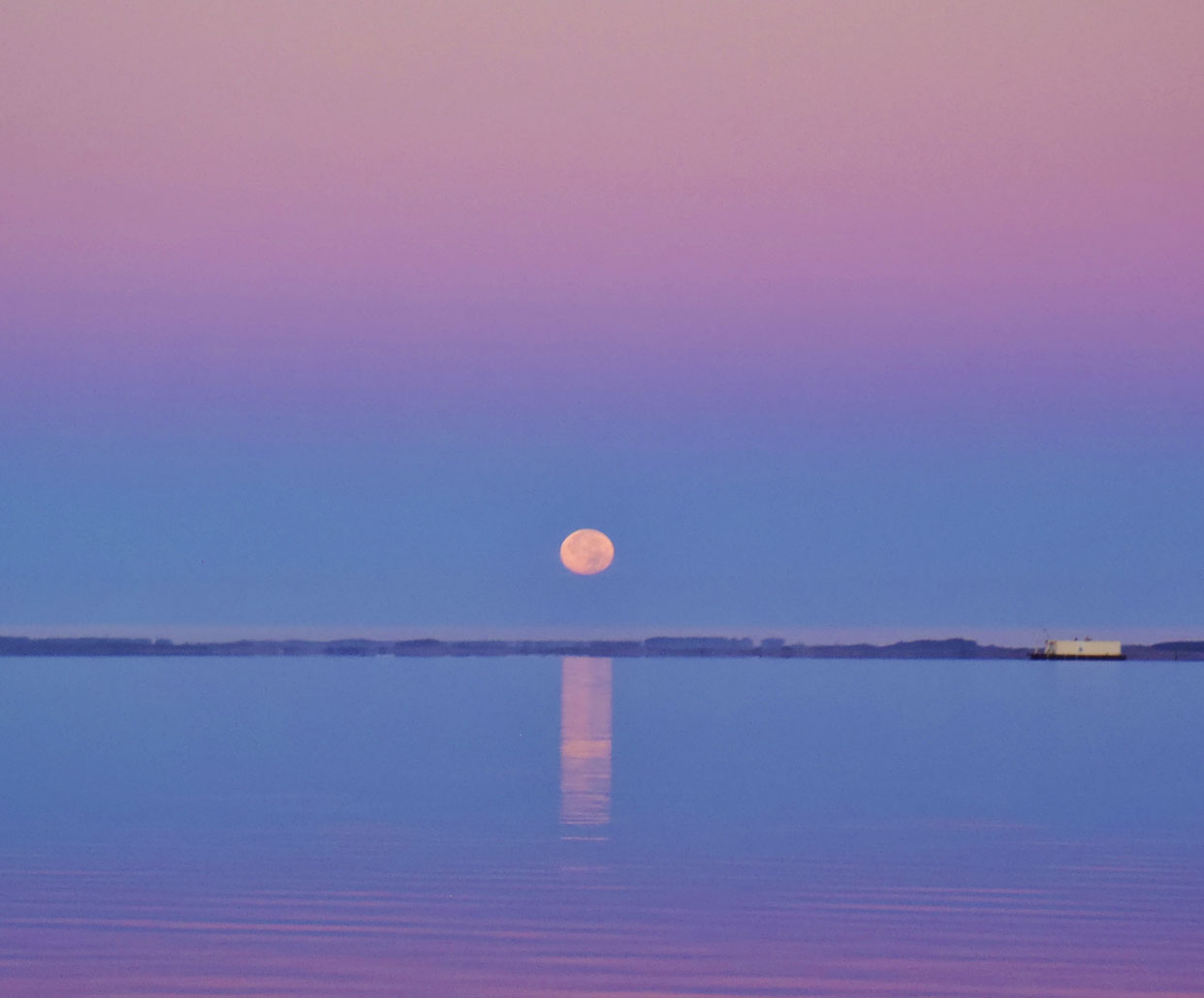 Fish tend to bite better with the moon near the horizon.
Few absolute truths exist in the world of lure fishing. Important principles impact various aspects of the endeavor, but most of them do not meet the definition of an absolute, one which rings forever and always true. I've spent considerable effort trying to identify as many absolutes as possible, because I know they provide a conceptual foundation for the sport. Analyzing all the aspects of these truths helps one better understand some of the most profound and basic tenets related to lure fishing.

In ranking the absolutes I've identified, I place them in a temporal order, on a time-line of sorts, related to what happens before, during and after a potential fishing trip. For me, this makes the most sense, and facilitates a meaningful discussion of various aspects and ramifications of each of the concepts. While attempting to generate the "best" wording for each of the absolutes, I've tried to keep things simple and direct. Although I generally avoid using second-person perspective in my writing, I find it works best in this case.

At the top of the list, as Absolute Number One, I place the following statement: You won't know if you don't go. No matter how hard one thinks about what might have been or would have been, one will not truly know how an excursion would have turned out if one does not make it out onto the water. This undeniable, inexorable truth results from the following fact, which essentially restates Absolute Number One: An angler who isn't fishing will not catch a fish.

Mostly, Absolute Number One relates to the decision of whether the prevailing or predicted weather conditions provide enough hope to justify the expense, trouble and time of making the effort to go. Most anglers check the weather before embarking on a fishing journey, either to decide what area or areas to try, and/or to decide whether to go at all.

On some occasions, when marginal conditions prevail and/or forecasts call for marginal or excessively harsh conditions, anglers decide to go anyway, citing Absolute Number One as a factor. The idea behind this has to do with a correctly perceived notion that difficult conditions can push anglers to adapt their methods and strategies in ways which eventually lead them to grow and improve.

Fishing guides and tournament anglers can generally verify the truth of such a belief, having fished in rough weather out of necessity. Most of them can cite instances when making a sincere and dedicated effort to cope with extreme conditions led them to some significant discovery related to catching fish. Eventually, guides and tournament anglers become better at recognizing which specific variables in a prevailing "conditions puzzle" carry the most importance.

Some situations which appear harsh and destructive to fishing efforts do, in fact, offer ripe opportunity to anglers who know exactly how best to deploy the strategies and methods which not only properly cope with the conditions, but exploit the opportunities they facilitate. In other situations, experts know the situation will likely make fishing a frivolous and fruitless idea.

For beginners and novice anglers, these issues create a kind of dilemma. On the one hand, difficult conditions help forge their skills and potentially accelerate the pace of their learning curves. On the other hand, failing to recognize when conditions offer nearly zero potential for success can lead to frustration, futility and even danger.

In a sense, this dilemma results from a related aspect of Absolute Number One: Anglers with more experience have a better sense of what to do to catch fish in various types of situations. In order to gain experience, one must roll the dice and make a sincere effort to cope with difficult conditions. Over time, one should become better able to recognize the situations which scream out for staying home and doing something else.

When one does decide to go fishing, Absolute Number Two comes into play. I find it easiest to understand when stated this way: You can't catch a fish that isn't there. Using more sophisticated words, it reads like this: An angler cannot catch a fish which swims outside his reach. The undeniable truth of this absolute suggests some other, related facts.

Fish location skills carry more importance than all others. I do not consider the previous statement to be an absolute, because it isn't always true, but it's certainly a reliable tenet. Sometimes, people find fish and cannot catch them, because they lack the skills to get the job done. They don't always realize this, when they can't verify the presence of the fish. Sometimes, they (we) can see the fish we cannot catch, and we realize in such situations that lure-choice/presentation skills carry more significance than fish-location skills.

Absolute Number Two relates to what I'll call Absolute Number Two(A): Fish will always be found IN the water. I realize the absurd simplicity of the previous statement; profoundly true statements, by definition, run the risk of sounding unsophisticated. The facts implied by them do not, necessarily. A prominent tenet related to Absolute Two(A) relates to the relative ease of catching fish in high and low tides.

Low tides can reduce the number of places capable of holding fish. In other words, low tides tend to concentrate fish in some areas, while eliminating others. If all the water drains off a flat, leaving sand exposed, one can clearly discern no fish can be caught on the flat! High tides, on the other hand, create confusion, increasing the number of places suitable for fish. If tides rise high enough to cover everything but the tallest sand dunes and spoil islands in the bay, locating fish can feel like searching for Sasquatch in the shadowy forests of the Cascades.

Furthermore, high tides make it impossible to fish some places in some ways, while low tides can make accessing those areas easier. Consequently, I conclude the following: Low tides facilitate catching fish better than high tides. This tenet rings generally true, but certainly does not qualify as an absolute. In some places, higher tides make the fishing better, if only because they make the fishing in those places possible.

Good fishing means good catching. Catching is more fun than fishing. And, bigger fish are more fun to catch than smaller fish. All these things are opinions, not facts. They are, however, widely held opinions. Related to these facts, Absolute Number Three comes into play: A dead fish cannot be caught again.

Catching, carefully handling and releasing fish promotes the health of the fishery. A fish caught and released by one angler can provide joy to another angler if it survives to bite again. Lower limits would mandate the release of more caught fish. So, lower limits facilitate a better fishery by increasing the number of fish available to catch.

In relation specifically to speckled trout, the previous statements bear importance, as do the following ones. Larger trout produce more and better eggs, so they serve the most important role in sustaining the population of the species. As a result, releasing big trout to live on and spawn again can result in two positive outcomes. For one, it will allow the fish to produce more of its kind (possibly numerous times) and it will allow other people to catch the fish again (possibly numerous times).

Parks and Wildlife's research suggests reducing the limit on trout by one half would result in twice as many trout over twenty five inches populating the estuaries within a relatively short span of time. For most anglers, such an idea seems like a good one. Kill fewer trout, especially big ones, and we all have a higher chance of catching more big ones when we choose to go fishing.

Absolute Number Three relates closely to Absolute Number Two. A dead trout can't be caught again because you can't catch a fish that isn't there. A fish frozen in a bag inside someone's garage is not in the water and cannot be targeted by an angler who chooses to go fishing. In conclusion, I offer these thoughts, with my tongue held firmly against my cheek.

You won't know if you don't go. If you do go, you will have to locate some fish in order to catch them. You will always find your fish IN the water. If you find fish, you have a chance to catch them, though you won't always be able to do so. If you catch some trout, you should release some of them to live on and spawn and be caught again. Because catching is more fun than fishing, and catching big trout is more fun than catching dinks!