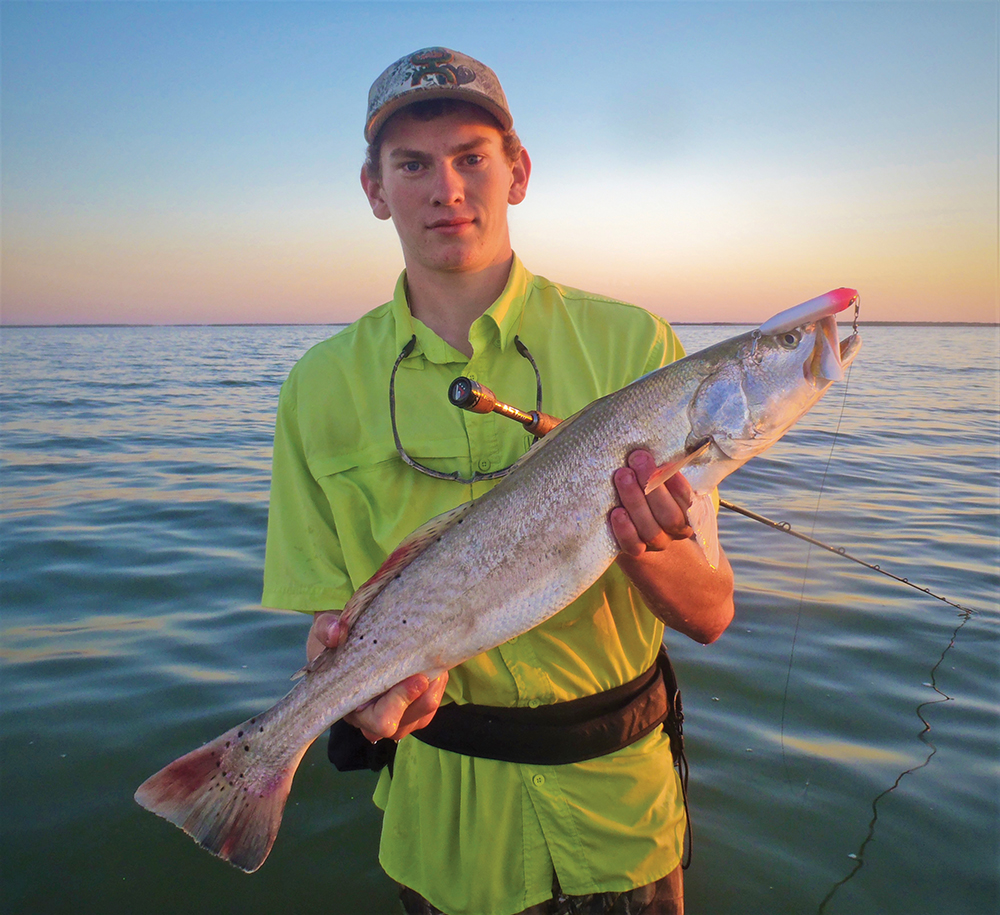 Super Spook Juniors work better than larger topwaters on many hot days, as Neal Laskowski proved on a June outing.

As the dog days of summer drag into early-autumn, the abundance of life forms in coastal bays and estuaries reaches its yearly max, in terms of variety of species and total biomass. When targeting speckled trout surrounded by a veritable buffet of tasty treats, lure-chunkers face two challenging dilemmas: locating some trout and figuring out how to trigger them into striking something artificial. Solving the puzzles begins with a search for revealing signs present in large concentrations of forage species.

Unlike in the cold months, when small numbers of mullet or other prey species can lead anglers to large schools of trout, effectively using the presence of “bait” to locate trout in hot water means searching for evidence of actively feeding predators. Several key observations can indicate such activity, all of which involve the movement patterns of the water, the prey species, other creatures, sometimes all of these.

Take “working birds” for instance. Any marginally savvy angler recognizes the significance of laughing gulls hovering in flocks low over the water, dipping repeatedly to catch shrimp leaping through the water's surface to avoid the jaws of trout snapping at their tails. The feeding activity of the specks reveals itself through the movement of the shrimp, the ripples and sounds made on the surface of the water, and the acrobatics of the vigilant gulls positioned above the fray. Other types of feeding activity create similarly recognizable visual and audible signs.

Mullet harassed by feeding specks huddle in tightly-packed schools atop shallow structural elements like rocks, reefs and spoil banks, or they move briskly, just under the surface, pushing wakes as they attempt to avoid their attackers. When under siege, members of these packs repeatedly jump out of the water in groups, several at a time, making long, lateral movements at a fast clip, while staying close to the water's surface. Trout feeding on mullet can sound like natural bombs erupting beneath their hapless victims, their mouths blowing holes in the compact schools of prey.

Similarly, when hungry trout chase glass minnows and menhaden, numbers of the small fish sometimes spray out of the water like confetti plumes, or flee rapidly in rhythmic unison, like living water wheels churning the surface. Long, slender species like needle-nosed gar and Atlantic cutlassfish dance on their tails and twirl in circles when fearing for their lives, half exposed, half submerged, fully frantic and desperate.

In hot water, all these signs indicate the presence of hunting trout at times, when copious amounts of marine creatures compete for space and fight for their lives.The old, reliable mantra, “find the bait, find the fish”, rings less true in the transition from summer to fall than at other times of the year. When water temperatures peak, all quadrants of our coastal waterways normally hold some forage species, so locating trout requires finding areas with high concentrations of bait, ideally showing signs of pressure from predators.

Once a captain identifies an area holding plenty of bait and recognizes signs indicating prowling predators, the second half of the catching game commences. Turning the trout’s eyes away from the plentiful sources of food around them and urging them to take something fake can prove frustrating. Ironically, concepts which conflict and create a kind of conundrum come into play in this challenging endeavor.

One aspect of the paradox resides within the realm of another well-established and regularly repeated mantra: “the need to match the hatch.” This idea relies on assumptions related to the tendency of predatory fish to periodically become focused on forage species of particular types, sizes and shapes. Once locked into such a mind-frame, and actively feeding, speckled trout can become ridiculously difficult to coax into striking anything which doesn't closely resemble the subjects of their recent obsession.

Living in a house on a canal proved this point to me on many occasions. When blooms of small fry hatched in the waterways, the resident trout often gorged on them voraciously, scooping whole mouthfuls out of schools which resembled clouds passing in front of the lights submerged in front of our piers and boathouses. As long as they had these easy food sources available to them, the normally cooperative predators became nearly impossible to catch on anything except a tiny spoon or fly, the only two things which plausibly resemble the diminutive, baby fish.

I confidently assert this issue affects lure-chunkers in other places throughout the bays. If trout become accustomed to feeding regularly on species with unusual shapes, like large menhaden or ribbonfish, tricking them into striking lures probably requires the angler to present something which adequately mimics their shape and size. These truths dictate a need to carry a larger variety of lures around the time summer rolls into autumn, as a way of remaining prepared to match an offering to the type of forage abundant and available to the trout in a particular place.

But here's where the irony of the conundrum emerges. In some situations, when fish focus and feed intently on one species, despite the presence of many types around them, matching the hatch sometimes backfires for lure-chunking enthusiasts. I've witnessed this in the aforementioned canals, and in other places, far from lights, bulkheads and boat docks. Decades ago, while wading the shallow sand flats behind San Luis Pass, I observed several large schools of redfish herding small shad and feeding on them. Supremely focused on their task, these hunters passed right by me several times, brushing against my legs as they went.

I could see the objects of their feeding aggression – dime-sized menhaden. After the schools succeeded in pressuring a pack of ample size into a tight wad, they'd rush into the midst of the tiny fish, gulping mouthfuls as quickly as they could. With a quarter-ounce silver Sprite spoon, I made dozens of casts ahead of and among the hungry reds without garnering so much as a weak strike from any of them. Frustrated, I put on a strawberry and white soft plastic and began catching one on nearly every cast. From this, I concluded the spoon was disappearing among the shiny shad, failing to capture the predators' attention, while the worm stood out from the crowd and became an easy target.

The contradictory truths related to the need to match the hatch and the need to distract fish fully focused on a food source of a particular size and shape create complexity in the fishing situation for lure-chunkers, especially in the hottest months of the year. Solving the dilemma related to what lure to throw at trout this time of year thus involves thoughtful experimentation and consideration of the food sources available to the predators at the time and place, as well as the feeding mood of the fish. Regardless of where they're found, trout regularly become finicky and difficult to entice this time of year, after feeding voraciously for a while.

When temperatures sizzle, negative trout react more aggressively to lures presented erratically, at high speeds, than to those moved more rhythmically and slowly. Consequently, lures with slender, streamlined shapes which facilitate the effective use of speed bursts normally perform better in hot water than bulkier, fatter ones. My list of known producers in this category includes the Super Spook Junior, the Baby Skitter Walk, the MirrOminnow, the 51M MirrOlure and the Johnson Sprite spoon. Rat-tailed soft plastics like the MirrOlure Provoker also perform well when retrieved at high speeds with lots of erratic movements incorporated.

Lipped crankbaits float, dive and wobble vigorously, effectively urging strikes from finicky trout at times, when the mercury rises near the top of the glass. Ironically, so does a specialized type of floating plug with propellers mounted on both ends – the MirrO Prop. This stubby lure looks like a shad, but can't be worked at high speeds, given the drag created by the metal blades rotating on its ends. It does effectively mimic the flitting sounds created by menhaden flipping at the water's surface.

In fact, the ability of prop baits to closely imitate the sounds generated by surfacing menhaden spurred me to try them many years ago. I'd experienced several occasions in the surf, when flitting menhaden rose to the top all around me, and I could see and hear trout attacking them, but could not make the specks strike anything in my box. Once I started throwing prop baits in situations like that, I caught plenty of trout in the most exciting way, teasing them into violent attacks. To this day, I experience outings on which topwaters carrying propellers draw far more strikes than conventional, cigar-shaped plugs.

Sometimes prop baits attractively match the hatch, as in the situations along the beach when menhaden surface. At other times, the slushing plugs draw the trout’s attention away from some other available forage species and entice reaction strikes. In this way, these lures play dual roles in the abundance conundrum, depending on the situation.

Accordingly, in the hottest part of the year, a wise way to solve the presentation puzzle on a consistent basis involves working from top to bottom, starting with floating lures which closely match the hatch, presenting them rhythmically and at medium-pace, assuming the targeted fish feed actively. If signs indicate inactive predators, or if strikes don't occur at an appropriate rate, presenting slender lures at high speeds and in erratic movement patterns lower in the water column makes more sense.