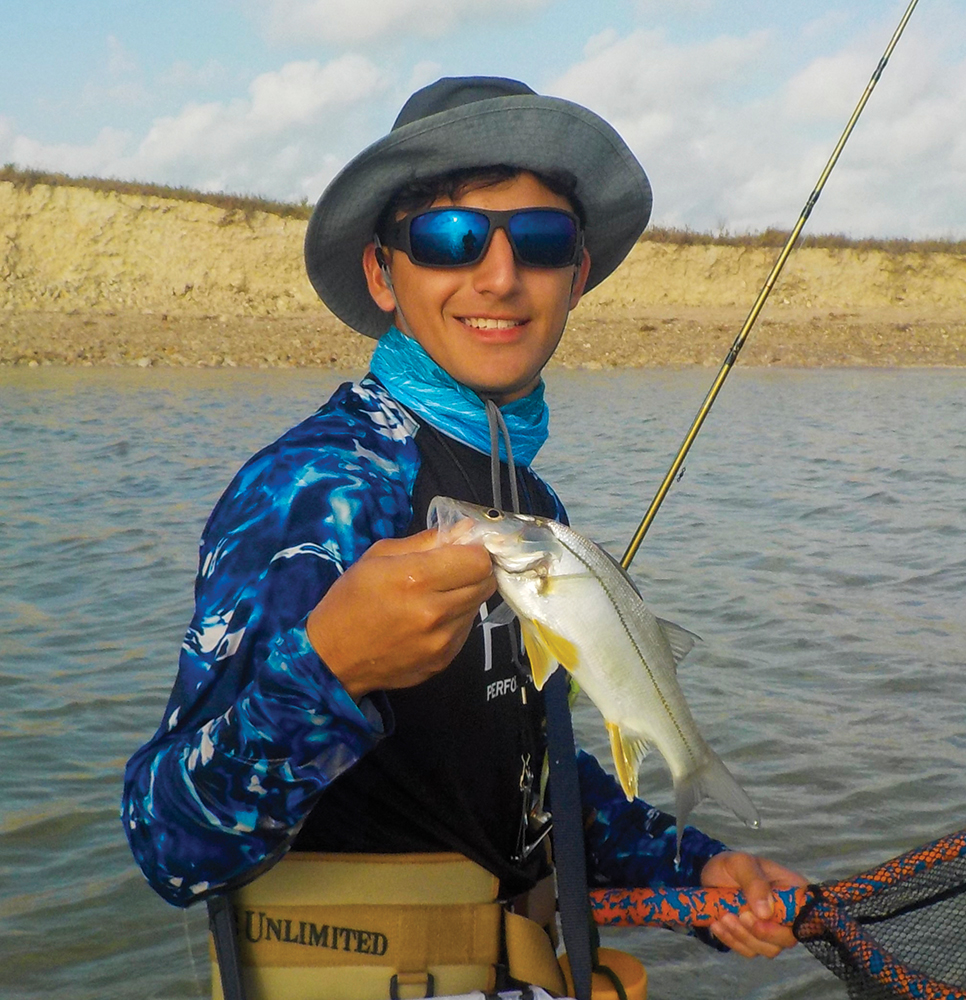 Jose Hernandez caught this small snook on a summer wade in Corpus Christi Bay while fishing with the captain recently.

The more I study birds and the avocation of birding, the more parallels I find between the attempt to locate and identify avian species and the sport of lure fishing. These structural similarities relate to many aspects of the endeavors, including the sometimes complex tasks associated with locating the target species. Seasonal variations enhance the odds of finding some species; they also present daily challenges to people hoping to capitalize on the increased opportunities.

Many birds migrate, some over long distances, moving to latitudes closer to the equator for winter, back toward the poles to breed during the summer. In spring and autumn, this means they travel through places lying between their breeding and wintering grounds, making short stays for rest and fuel during their journeys. In South Texas, where I live, this plays out most notably in April and May, also again at the end of summer/onset of fall.

During those time frames, we sometimes see over 100 species of birds in a day, many of which won't stay around for long. In this way, the seasonal migration increases the likelihood of finding some species of birds in the places they use for rejuvenation during their physically demanding travels. This often means it's possible to locate an individual bird in a relatively small site for several days straight, perhaps a week or more.

In other cases, a bird appears one day in a place, where people document its presence, then vanishes, probably because of the profound effects spurred by the undeniable urge to complete a necessary journey. As birders, we help each other locate the migrants when they pass through, posting reports of locations where we see uncommon ones, or ones who've veered off track and shown up in places where they don't normally appear. Some people drive and/or fly long distances to give themselves a chance to get a glimpse of a rare bird in these situations.

But, like my friend Mel Cooksey, says, “The worst place to look for a Bobolink is the last place it was seen.” Mel has studied birds for half a century. He makes a simple point. Birds like Bobolinks don't typically sit still for long, since they make their living hunting for edible seeds and insects in weedy fields and other spacious, open tracts of land. Especially when they're traveling from parts of Central America to northern parts of North America and back again, they move almost constantly from one place to the next, sometimes making impressively long flights at night.

In essence, this truth strongly affects the strategy of any birder hoping to locate one during a migration, elevating the importance of mobility and persistence of focused effort in sites with specific types of habitat. The best way to find a Bobolink in South Texas is to go to locations where they drop down to the ground to rest and feed, then look hard for them, during the peak days when they're generally seen, and when weather elements increase the likelihood they'll find a need to temporarily stop, rest and refuel.

This birding mantra applies strongly to some aspects of fishing for speckled trout in Texas bays during October. This month, many organisms in our coastal waters move out of shallow backwater areas and head toward the open ocean. Like migrating birds, they pass through places and stay briefly, while they make their way. Avian and piscatorial predators know this, and they take advantage of the temporary bounty the situation creates.

When I lived in Bayou Vista, in a home on stilts beside a canal fed by the waters of Jones Lake, I developed a strong awareness of the typical timing of the onset of the fall migration among the crustaceans and other prey species which populate the back-bays and saltwater lakes throughout the warm period. On average, about a week or ten days before Halloween, the first cold front possessing enough force to serve as a genesis for the yearly big move usually passes over the Upper Coast of the Lone Star State.

The expected arrival time of this big front gets pushed back a bit later in The Coastal Bend, but certainly the bait migration gets underway by early-November, even in southern extremes of the state. By “enough force”, I mean this front drives water temperatures down to around sixty degrees or maybe a shade lower, and more importantly, the north winds shove water out of the recesses of remote bodies of water like Greens, Carancahua and Jones lakes, and the species which have spent the summer in those places begin making their perilous journeys toward the Gulf of Mexico.

This original front and the ones that follow serve as the straws that stir the metaphorical drinks in the existential tavern their passing propagates. Brisk, whistling winds provide dramatic, natural music, like a score for the scenes playing out beneath them, within and just above the frothy waves. Mostly, this drama centers on survival, a struggle shared by the prey and the predators which hunt and eat them.

Predictably, speckled trout take advantage of the large-scale movement of so many organisms which potentially provide them sustenance. Consequently, they stage in places where the burly forces of these autumn fronts blast water out of back-lakes, coves and shallow nooks and crannies, dumping countless creatures into open parts of the main bays lying adjacent to them. Then, a game of chase and flee begins in earnest, while the hungry trout attempt to take as many of the migrating shrimp and other critters as they can, fattening up on the ephemeral source of food.

The birds who live in these places know what's coming, and they arrive on cue, hovering above the stages, their sharp eyes scanning for every opportunity to snatch a hapless shrimp out of the air, once it desperately jumps away from the snapping jaws and slashing teeth below. As the action reaches a peak, the squawking voices of the gulls add audible highlights to the wail of the wind, providing complexity to the scenes' scores.

Like all things related to the coastal waterways, the action ebbs and flows. While the tide rolls out under the influence of the winds, the intensity of the drama increases. Eventually, fronts lose their punch, calmer conditions prevail, and the migrations stall for a while. During these halcyon days, the general location of the center of the action can become somewhat predictable and dependable, and though the number of trout pushing schools of harried prey toward a surface frenzy might not equal what occurs on days with stronger winds, the action will nonetheless provide reliable potential to coastal anglers who pay attention to recent trends (and reports) and show up in the right places.

But once the next front roars in and sloshes the water around again, the action will likely find a new center, one somewhere down the road which provides the migrating species access to the Gulf. In this way, chasing school trout in October on a riverine estuary on the Upper Coast resembles searching for a Bobolink in Nueces County in April. On many occasions, looking for them in the last place in which they were seen makes little or no sense, compared to the idea of venturing to another known productive area and maintaining a vigil.

Consequently, anglers keen on staying in the midst of the working birds, migrating herds and slurping trout this month will acknowledge the need for mobility, also to monitor weather and other factors which affect the migrating species in predictable ways. These trends include tide levels, water temperatures, wind speeds and directions, sometimes salinity levels, too. Early in the month, good numbers of trout will likely move well back into the fringes of the upper parts of our coastal bays. There, they'll prey on shrimp and other species.

Anglers who spend time in the back-lakes and coves during the first half of the month will probably encounter flocks of working gulls and terns which lead them right into the midst of the fray. As Halloween creeps ever closer, Mother Nature's predictable forces will likely send the action out of those same marshes and pockets, into adjacent parts of the main bays, in places like Coffee Ground Cove, Jack's Pocket, Green's Cut, Chinquapin, Tres Palacios, Hynes, Guadalupe, St. Charles and Odem bays, also other oyster-studded bodies of water close to the mouths of rivers which spill into our coastal waterways.

Then, the action will march steadily toward the ocean, like it always has and always will, as long as our estuaries support these many life forms.  Savvy anglers will resist the temptation to fall in the trap of seeing something so kinetic as something static.  They'll remain ready to move and search, keeping an eye out for all signs of life as they go.  Finding the new stage for the next scene might involve watching a tern wheel and dive, recognizing the likely source of a muddy patch of water or hearing the unforgettable whines uttered by a pair of laughing gulls squabbling over the remains of a single brown shrimp.