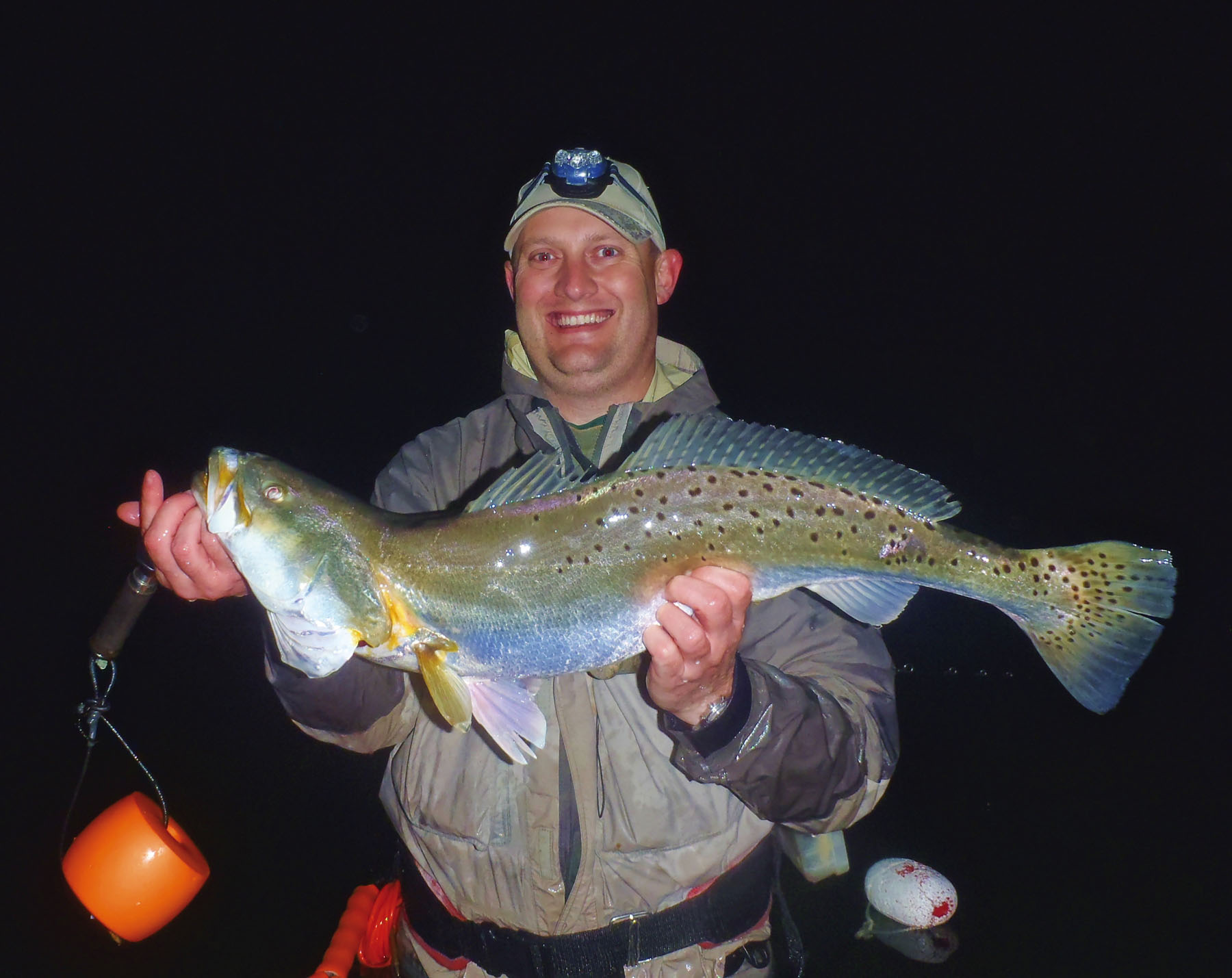 Using one hand to support the weight of a fish while a picture is taken as Beau Blackard is doing here probably causes less harm to the fish than dangling them from the lip vertically on the Boga Grip.
As most people reading this already know, Texas Parks and Wildlife officials voted recently to lower the limit on speckled trout in all state waters south of Highway 457 from ten fish to five, starting on September 1st. The decision came after solicitation of public opinion, which proved amenable to the change, except in the Houston/Galveston area, where the prevailing sentiment favored leaving the limit at ten. I applaud the state for making the change, one I have perceived as necessary for nearly a decade.

TP&W's own studies suggest lowering the limit will increase the number of large fish in the system within a couple years. The evidence gleaned through gill net and creel surveys taken in the Lower Laguna Madre, where the limit on trout dropped from ten to five back in 2007, supports the claim. Most of us like the idea of having more big trout to target.

People like me who rely on trophy trout to sustain our lifestyle surely love to think we'll have more of them swimming in the waters in which we ply our trade. In a perfect world, I believe the state should also have eliminated the "one over twenty five inches per day" rule, and replaced it with a "trophy trout tag", like the one currently issued for oversized redfish. That way, an angler could keep one giant trout per year. I believe people should have the right to retain trout of extreme size on rare occasions. Killing one over twenty five inches per day makes no sense to me.

Large specks do not taste as good as small ones. Furthermore, large female trout produce more and better eggs than their smaller kin, so they serve the most important role in the spawning cycle and preservation/proliferation of the species. On my boat, we catch plenty of specimens over twenty two inches (hundreds in a good year) but we kill nearly none, at least not purposefully. Doing what is right requires no law!

While I did not generate this piece to stand on a soap box and preach, I do perceive a need to reiterate several things related to catching and releasing trout, while we approach the brink of a new era, one governed by a lower limit. If fishing for trout improves significantly (as evidence, both scientific and anecdotal, in the LLM suggests it will) more people will wind up releasing some of the trout they catch. Hypothetically, a limit will become easier to reach, but people won't necessarily want to stop fishing, so they will release the "extra" trout they catch.

First off, let me here attempt to dispel the notion (which apparently still exists in some corners of the fishing community) that trout caught by rod and reel and released generally do not survive. No one, myself included, would want to intentionally waste fish. Most of us learned a sporting ethic at an early age which severely condemns such behavior.

But well-planned and executed studies done on the mortality rates of trout caught and released suggest we can expect a high percentage of them to survive. Parks and Wildlife officials first performed an experiment to measure the mortality rates of trout caught and released in the late 1970s. The relatively crude methods they used back then proved several things. For one, crowding trout into a small "cage" in hot water during the months of August and September placed stress on the fish, and probably skewed the survival rates downward.

Still, 44% of the fish caught, transported and placed in the cages during this study survived for the duration of the study. That's a pretty low number, in my estimation. The officials performing the work did acknowledge the probable impacts of the hot water and low tides on their results, and concluded, "The regulation requiring the release of trout....should provide many fish an additional opportunity to spawn before being harvested." (Matlock, Dailey, i)

Back then, state officials wanted to determine whether placing a minimum size limit on trout would result in the senseless killing of thousands of small fish by recreational anglers bound by law to release them. They determined such a limit would not. Since then, "better" studies have been done, showing an even higher survival rate among spotted seatrout caught on hook and line and placed back into the water from which they came.

Dr. Greg Stunz of the Harte Institute (Texas A&M Corpus Christi) performed an extensive study in two phases, to measure not only mortality rates of trout caught and released, but also to measure the effects other variables might have on the mortality rates. Significantly, Dr. Stunz's summary of Phase One showed a "relatively low short-term mortality rate....18%". Furthermore, trout observed for 30 days "showed no signs of long-term mortality."

This phase of the experiment did identify two factors which tend to increase the mortality rate of released trout: the experience level of the angler and the location where the hook impaled the fish. Less-experienced anglers tend to kill far more fish, as do certain types of hooking wounds.

Phase Two of the experiment attempted to "estimate catch-and-release mortality of hook-and-line captured spotted seatrout by recreational anglers as a function of hooking location, season and competitive sportfishing tournaments." (Stunz) In this phase, Dr. Stunz noted a high mortality rate among fish hooked in the esophagus and gills, but a low mortality rate among those hooked externally or in the mouth. Importantly, only 12% of fish were hooked in the high-mortality areas.

Additionally, this phase of the study showed higher mortality rates in spring and summer (when temperatures are generally higher, and when the TP&W study of 1979 was conducted) than in fall and winter. Also, the evidence indicated a "slightly higher" short-term mortality rate among trout caught, transported to a tournament weigh-in site and subsequently released, than on those released at the spot where they were caught, soon after being caught.

Appropriately, Dr. Stunz recommended tournament organizers not hold tournaments in the spring and summer, and that they consider maintaining multiple weigh-in sites, to reduce the stress on trout caused by transportation in the live wells of competitors' boats.

To obtain more detailed information from both these studies, use the following website links: www.HartResearchInstitute.org/ochealth-research/catch-release and www.tpwd.texas.gov/publications/pwdpubs/media/mds_coastalSeries%201_MDS15.pdf.

Several points related to the practice of catch and release can be supported by the research done in these studies. Obviously, most of the trout released can survive being caught and returned to the water.....over 80% according to Dr. Stunz's data. Apparently, the manner in which the anglers catching the fish handle them will affect the survival rates.

Anglers should do everything possible to avoid roughly handling trout they intend to release. If wading, they should use a Boga Grip or other device to steady the fish in the water while removing the hook. Ideally, they should then release the fish without lifting them from the water. Lifting fish from the water to take pictures and/or to measure them should be done quickly, and in a manner in which the angler uses their hands to support the fish, rather than simply dangling them by their lips on the device.

In all cases, the anglers' hands should be wet when touching the fish, and the time the fish are held out of the water should be kept to an absolute minimum. When fishing from a boat, anglers should attempt to lean over the side of the boat to release fish in a manner similar to what a wader would. If doing so is not possible, the fish should be netted and carefully handled, rather than slung over the gunwale onto the hot, dry deck of the boat. Fish flopping around on the deck undoubtedly sustain fatal injuries more often than those which remain in the water or in a net.

Obviously, no one should ever grab a trout intended for release with a towel, nor should they place one on a stringer. Tournament anglers who wade and who choose to string fish while transporting them to the boat's live well should do so as fast as possible.

All these issues become even more critical when balmy weather warms up the water. Following all these practices will undoubtedly ensure the highest possible survival rate of the trout caught and released.

On the other hand, when a trout has taken a hook deep in its throat or has sustained a broken gill during the fight, the fish should be retained, in order to preserve the sporting ethic which says we should eat, not waste, what we choose to kill. Our burden is this–to do the right thing. The public perceives the speckled trout as both a food fish and a sport fish. If we all do everything we can to manage the resource ethically and responsibly, we will have plenty of eating-sized trout to catch in the future, and a few more big ones too!