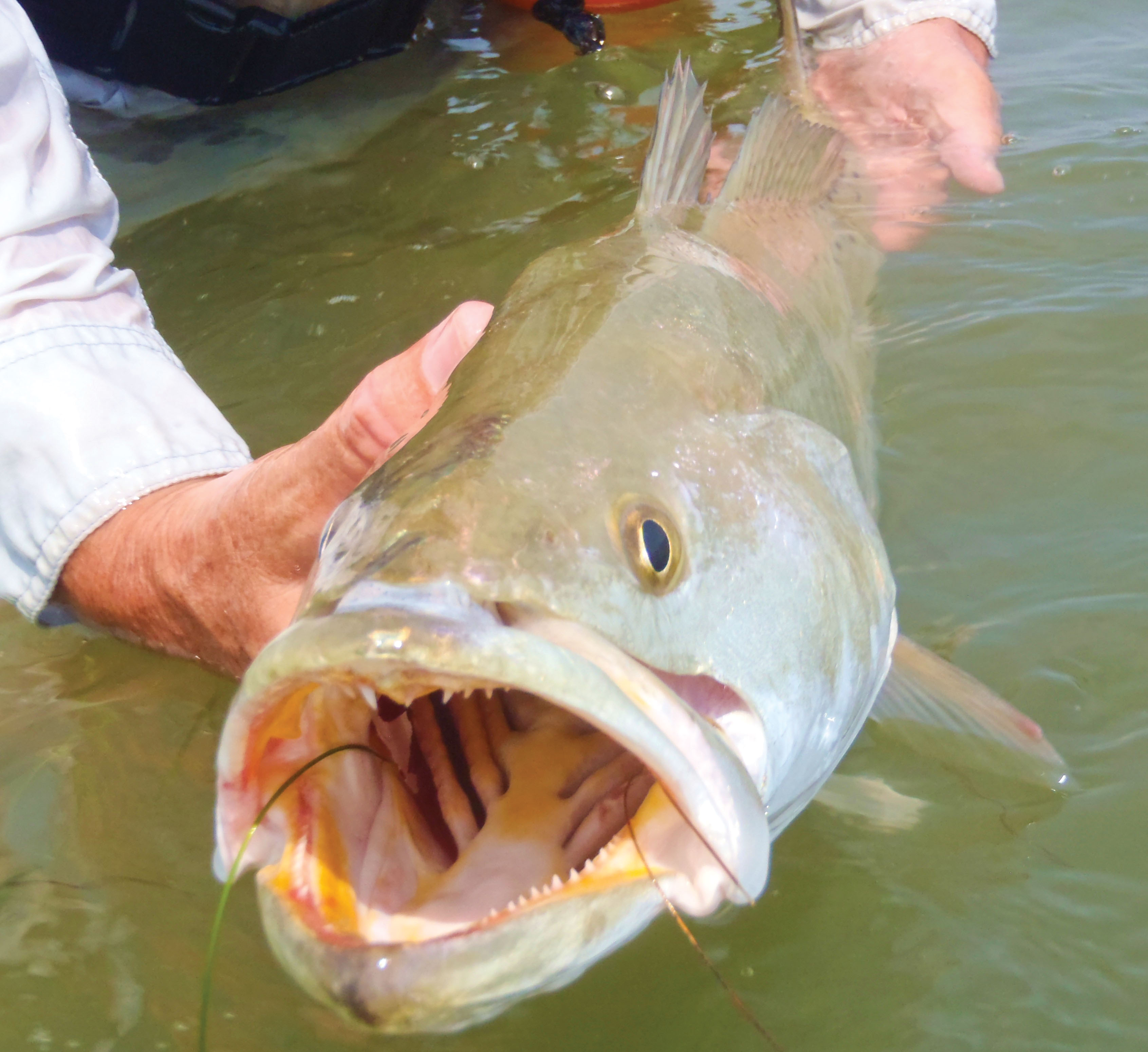 The careful handling of large speckled trout helps increase their chances of survival after release. Studies indicate somewhere between 80 and 90% survive if handled properly, regardless of the season.

I'm not a tree hugger. Trees need no human compassion. They thrive when left alone. All they really require is water around their roots, sun shining on their leaves. Given these simple things, they grow to beautify and enhance the environment.

Trees do need appropriate habitat in order to survive. All kinds of living things share the same requirements--space, food sources, freedom from harassment.

Far too often, human cultures are unable or unwilling to provide these necessary things to the wild creatures with which we share the planet. The rich diversity of life forms in the world is thus threatened, as human populations continue to expand, placing greater stress on other species and the habitats they need.

We've heard the stories of the demise of some creatures time and time again. In the past, the American bison was pushed to the brink of extinction. In today's oceans, giant blue fin tuna are disappearing, as the price for their flesh rises at a rate directly proportional to their increasing scarcity. Others, like the whooping crane, cling to survival most precariously, only through the efforts of the same groups of people who nearly extinguished them.

Some species survive in relative abundance, in spite of constant pressure from people. The spotted seatrout is one such species.

When the days get long, speckled trout tend to prefer cooler waters down deep, and they become kind of lazy in the heat. The bigger specimens become difficult to entice into taking plugs constructed of plastic, metal and wood, crafted entirely by the hands of man.

In Texas, fishing guides discovered the efficacy of targeting speckled trout with live croakers, piggy perch and other finfish nearly two decades ago. Today, most of them prefer this method over all others, since it helps them more consistently send their customers home carrying full limits of filleted fish.

I've eaten my share of speckled trout over the years--fried, broiled, grilled and baked. I like the taste of trout fillets, especially those carved off the bones of smaller specimens. As I said, I'm no tree hugger, nor am I fundamentally opposed to the idea of responsibly harvesting some trout to eat.

My conflict with the legions of bait soakers who relentlessly pursue limits of the biggest trout they can legally take starts with the concept of what constitutes "my share" and ends with what it means to "harvest responsibly." I and many others believe the trout fishery is not as healthy as it once was, or (more importantly) as it "could" be.

Plenty of trout still populate the waters of the state, in all corners of the bays, beachfront areas, channels and other waterways. The average size of those fish is not what it would be without so many people taking medium-sized, healthy spawners out of the schools so regularly.

The causes for the decline of the fishery are many; one of them is clearly the continued high level of harvest among fishermen targeting the fish through the use of live finfish during the warm season. According to Parks and Wildlife's data, about one third of all trout harvested statewide are killed during guided trips, the majority of which involve using live finfish as bait. Still, I would not urge TP&W to outlaw the use of a specific kind of bait.

Some people deserve and need to fish with such a method on occasion, out of real, tangible need. Most others should choose to fish some other way. Doing what is right requires no law; doing what's right when no one is watching defines honor and integrity.

It's wise to act as responsible stewards for the animals and resources which help sustain us. Native Americans knew this, making use of all parts of the bison they slew with bows and arrows, revering the animal as a kind of "father provider." Then the white European settlers came, bearing long rifles. They blasted the herds down to nearly nothing, making poor use of the carcasses along the way.

Are we headed down a similar path with the spotted seatrout today? Have we forgotten the lessons of the past? Is our culture without wisdom?

I believe I said it best when I wrote an article detailing the demise of the totuava in the slender, emerald ocean lying between Baja California and the mainland of Mexico. Commercial fishermen using live bait there depleted once-plentiful schools of giant white sea bass to a point where taking one today is rare indeed. Anglers found to be in possession of one by Mexican authorities can expect to have their boats seized. When human beings identify the most effective way to harvest a particular species of fish, then deploy the method on a widespread basis, the sustainability of the species will be threatened.

It pays to remember what happened soon after Paul Prudhomme created the recipe for blackened redfish. Helicopters and spotter planes pointed net boats straight at schools of spawners in the open Gulf. Without the intervention of forward-thinking pioneers who started what was then called the Gulf Coast Conservation Association, the commercial fishing industry would likely have scooped up enough fish to cause a collapse of the species.

Today, at state of the art hatcheries, Texas Parks and Wildlife officials raise millions of red drum fingerlings and release them into our coastal bays. Redfish and the economic entities associated with them are apparently headed for long-term prosperity, partly because the recreational daily bag limit for reds is set at three.

Conversely, the trout limit remains at 10, right where it's been since 1984, in all parts of the state except in its southern extremes. Many people believe this number is too high to sustain excellent fishing over the long haul.

I'll admit I'm not concerned about the preservation of the trout fishery for purely selfless reasons. On the contrary, I'm concerned for selfish reasons. I'd like to see the fishery thrive and prolong the existence of the lifestyle I love, a way of life dependent entirely on the presence of large speckled trout.

I will not complain here any more about the actions of others. I have no control over such things. I will state for the record the actions I take to ensure the preservation of the spotted seatrout.

I enforce a five fish limit on my boat, though state law allows my customers to keep ten trout each. I offer a catch and release discount which equals about 10% of the total price of an average charter. Though state law allows each angler to harvest one trout over 25 inches daily, we kill and keep no trout over 22 inches intentionally, except for a scant few, extremely large specimens, which clients wish to use for skin mounts.

I don't fish tournaments which allow and encourage trout to be brought to the scales dead, though I regularly receive calls asking me to do so. I turn down opportunities to make money by fishing in such events and by fishing with live bait too, precisely because I do not want to be involved in those activities.

I do target big trout throughout the year, using artificial lures exclusively. I carry a camera at all times when fishing, so I can document the dimensions of the trophies we catch and release. I send many clients away with something they can use to preserve lasting memories.

In essence, I operate my business out of passion for the sport of fishing, not in the interests of greed and gluttony. I believe my actions speak louder than any words, providing leadership to anglers who look to experts as a model for how things should be done. Sadly, many people in the fishing business do not operate from this mindset.

This importance of the "problem" related to the Texas trout fishery pales in comparison to some others we face. With young men and women jetting off to war fronts daily, resources across the globe dwindling, and whole national economies wobbling on weak knees, other issues undoubtedly carry greater significance. Still, big changes can only be made through the taking of small steps.

The perfect time for changing our collective attitude and behavior toward the spotted seatrout has probably already passed, but we can still make a difference. The urgency is greater than ever. If we choose to change or ways, we can help make the speckled trout's story turn out more like the red drum's and less like the buffalo's. Future generations will judge us by the choices we make.