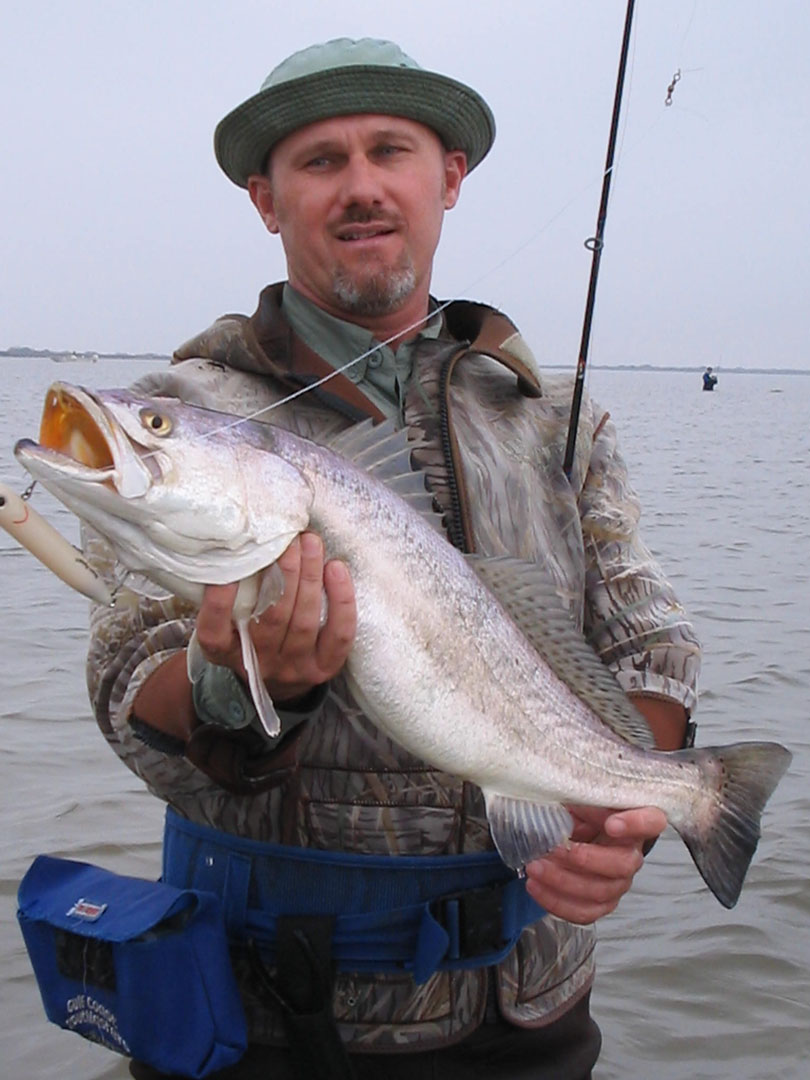 This blanched trout came out of a frequently turbid area often tainted by brown tide.

Over decades of studying spotted sea trout, I've encountered various and sometimes contradictory theories regarding their behavior and biology. One claim I heard years ago asserted that old trout will sport few of their namesake spots by the time they reach maximum age and size. I've directly challenged that idea in recent years, having caught numerous brilliantly colored, long specimens carrying hundreds of dots on their backs and sides.

My own experience has led me to a different conclusion, one that is supported by related scientific efforts. I believe that the coloration of speckled trout (and other fish) is affected by the turbidity of the water in which they reside. Clear water with minimal turbidity will cause the skin of the local fish to be more heavily pigmented; conversely, high levels of turbidity will cause the fish to lose color and appear silvery or blanched.

I came to this conclusion after years of fishing in waters with highly variable levels of clarity. The natural state of the waters in my home area is crystal clear, particularly in the Laguna Madre. When I'm fishing in those waters, I tend to catch colorful trout and redfish. Where I live and work, we also deal with frequent brown algae blooms, which is like turbidity, in that it reduces light penetration into the water. In waters stained by brown tide, almost all of the fish I catch appear faded, lacking the pigment of their neighbors in clear water.

Many of the pictures I've taken prove that. The idea of turbidity affecting coloration is also substantiated by various sources I found while doing research for this piece. In one such article entitled Strategy: Pigment Granules Assist Hiding: Ray-finned Fishes, Collis asserts that "many fishchange color in response to the overall reflectivity of their background. Light reaching their retina from above is compared in the brain to that reflected from the background below. Many flatfish, including flounder, go further than overall reflectivity and develop skin patterns according to the light and dark divisions of their background." More light reaching the eyes of the fish results in a stronger reaction and therefore more color in the skin of fish residing in water easily penetrated by light.

His work suggests that trout and redfish residing in clear water over bottoms largely covered in sea grass, which is relatively dark when compared with sand, clay or mud, will become darkly colored. It's not as I'd expected; I'd thought of it in more human terms, as if the fish were "sun burned" from greater exposure to ultraviolet rays in clear water. No matter, the result is the same.

From all of this, I reach one important conclusion with regard to how this variation in coloration affects angling efforts for speckled trout. When fishing in clear water, it pays to use lures that have natural color patterns, or those that are intensely colored and bright. Offerings fitting this description include baby trout, baby bass, pumpkinseed/chartreuse, black/white and pink. On the other hand, when working turbid water (including brown tide stained) a plain white lure makes sense, given that fish in such waters have low pigmentation levels.

Taking these concepts one step further, it's obvious to me that the color of a lure matters most in exceptionally clear water because the clarity gives fish better vision over greater distances. In turbid water, the creation of noise or vibration and the presence of attractive scents are likely more important attributes than the hue of a lure.

While searching for information on this topic, I came across what I now perceive to be some relevant and related data about the effects of turbidity on the predatory behavior of fish. In a recent article entitled Differential effects of turbidity on prey consumption of piscivorous and planktivorous fish, Robertis and others state that "contrast degradation theory predicts that increased turbidity decreases the visibility of objects that are visible at longer distances more than that of objects that are visible at short distances. Consequently, turbidity should disproportionately decrease feeding rates by piscivorous fish, which feed on larger and more visible prey than particle-feeding planktivorous fish. [Their research shows] that turbid environments may be advantageous for planktivorous fish because they will be less vulnerable to predation by piscivores, but will not experience a substantial decrease in their ability to capture zooplankton prey."

The evidence in that piece has relevance to this one in a significant way. It suggests that speckled trout become less effective in their predatory efforts in waters strongly tainted by brown algae, or at least that their predatory habits will be changed by the turbidity associated with the algae. My own anecdotal observations would support that. I have noticed that even where large concentrations of baitfish are found in a murky area, they are less likely to be seen jumping and actively fleeing predators than when they're found in areas with better clarity.

I also find that it's easy to walk right up on trout and redfish in turbid water; it's frustrating to see mud stirs made by big fish after nearly stepping on them, since they are then nearly impossible to catch. In clear waters, I rarely get so close to the fish, especially the bigger ones. A few times, after deciding that an area in clear water was void of fish, I drove over plenty of them in the boat when leaving. They seemed to have been moving constantly with us, staying just out of our reach.

To me, these facts indicate a change in behavior of predatory fish in response to turbidity, especially long lasting turbidity. It seems that trout and redfish inhabiting murky waters become more sedentary, remaining almost stationary, waiting for a prime opportunity to ambush their prey, since foraging around without good visibility consumes too much energy to be an effective strategy.

A sedentary attitude in the fish probably explains why bites are usually hard to get in brown tide, but when a fish does bite, it often attacks with a noticeable ferocity. The strike zone in front of a fish in turbid water is undoubtedly small, requiring an angler to place a lure perhaps inches from its nose. When a suitable offering does enter a fish's ambush zone, it might elicit an impressive predatory response, given that the fish may have been waiting some time for just such an opportunity.

In nasty water, it's wise to slowly work noisy and/or smelly lures through areas with plenty of potential staging spots for fish lying in wait to ambush their prey. Success in stained water therefore requires intimate knowledge of the area to be fished, since the bottom and all its structures cannot be seen. Staying around known sweet spots and making every effort to keep lures in close contact with their structures will pay off better than a faster, more far-ranging approach favored in water with better clarity. Ironically, turbidity affects the fish and its hunter similarly, creating in each the need for a patient and relatively sedentary strategy.