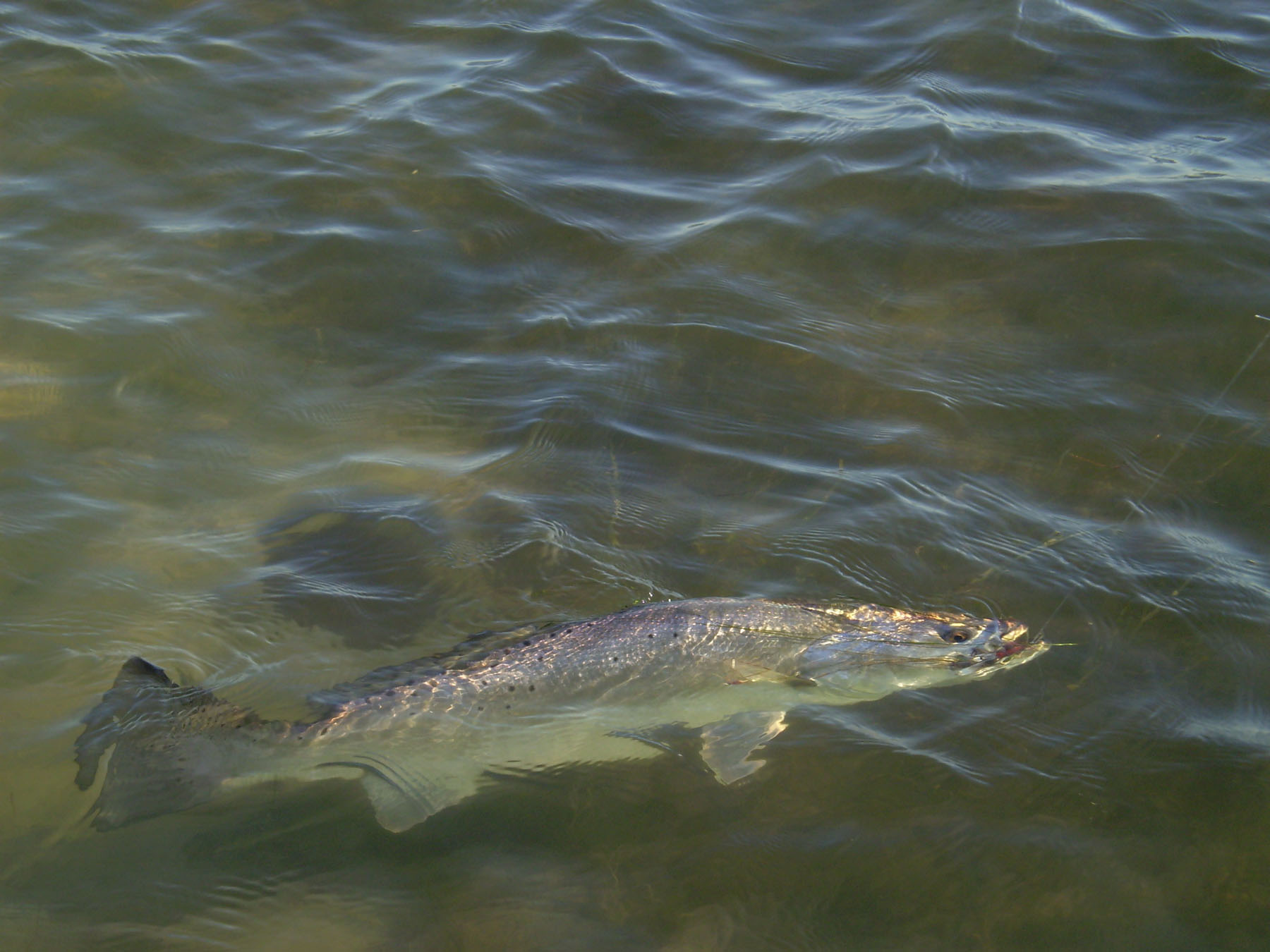 Catching big trout this shallow is often harder than finding them. But the difficulty of the challenge is addictive to some anglers.

I moved to Corpus Christi for a reason. Years ago, I made a list of every bay, lake, cove, bayou, jetty, flat, shoreline or other named saltwater fishing hole I could find on maps of the coast of Texas; to date, I've visited almost all of them. In the process, I learned that what appeals to me most is the awe-inspiring versatility of the area in which I now reside.

By planting roots on North Padre Island, I have placed myself squarely in the middle of a virtual cornucopia of saltwater fishing options. While I won't pretend I regularly take advantage of all the possibilities within easy reach, I am delighted to be in the midst of such variety. Starting at the northeast end of Corpus Christi Bay, it's easy to document why so many anglers consider this region a kind of mecca.

From the docks in the charming harbor town of Port Aransas, captains behind the helms of stretched out, sleek sportfishing cruisers find relatively easy access to some of the most productive billfish grounds within reach of the Texas fleet. The East Breaks, Aransas Bank, Baker's Rock and other spots lie within range of the end of the granite jetties protecting this sandy hamlet where on any summer night, it feels like one might glimpse the ghosts of Ted Williams and Ernest Hemingway clinking glasses to celebrate the day's catch.

Here, the ten-fathom curve lies close to town when compared with its proximity to upper coast ports like Galveston and Port Arthur, bringing species like king mackerel, red snapper, dolphin and ling within the scope of most any seaworthy craft. Also, because of the warm climate in south Texas, the season for seeking pelagic species is long. Even in winter, the heartiest souls venture offshore to take advantage of what can be ridiculously easy fishing for wahoo and sow snapper.

The old Aransas Jetties and the new ones at the Packery Channel, though not nearly as long as those at Galveston and Sabine, are the scene of many productive outings for everything from panfish and sheepshead to school trout, bull reds and black drum, even the occasional smoker king. In recent years, a few whopper snook have been taken too, and given a reprieve from future freezes, catches of "line-siders" should only become more common.

Fishing for trout along the many miles of beachfront in this area is another of the tantalizing options available to anglers. The surf clears up easily and stays that way even under moderate breezes, because the water here carries much less river-deposited silt than the waves washing onto upper coast beaches. All the way from Cedar Bayou to the Mansfield Jetties, ravenous schools of trout frequent the shallows fronting the narrow strip of sand seaward of the dunes. It's even possible to find and catch specks in the Padre Island Surf in the dead of winter, when other surf zones are virtually void of the species.

Of course, trout fishing is not what makes PINS famous. Nor is it the search for centuries-old artifacts stranded with shipwrecked Spanish sailors who met bloody fates at the hands of the Karankawa Indians. It's not even the staggering number of species available on this remote beach, including tarpon, jack crevalle, Spanish mackerel, bluefish, little tunny, pompano, bull reds and the acrobatic ladyfish. Really, it's the shark fishing that beckons four-wheeling longrodders who dunk large baits well beyond the bars, hoping to attract the attention of some of the apex predators of the sea. Numerous leathery critters with serrated teeth have been caught from the steeply-sloping, shell-crusted beachfront south of Malaquite.

Inshore diehards like me don't really desire to do battle with such creatures, but the options for our favorite species are numerous indeed. On the northern fringe of Corpus Christi Bay lies the La Quinta Channel, a fifty foot deep ditch leading to the docks in Ingleside. Along both sides of this trench, shallow sand and grass flats are available for wading, drifting and fishing at anchor. It's the longest stretch of deep water in Texas bordered by such shallow flats.

In the west end of Corpus Bay, the silty satellite of Nueces Bay sits. River-fed like an upper coast estuary, its brackish shallows are studded with numerous fish-holding oyster reefs. Those who know how to navigate this treacherous maze of shell banks and discarded oil field junk find trophy trout, herds of reds and both puppy and bull black drum when salinities are high and winds are light.

In the middle of Corpus Christi Bay, as in most other deep, open bays, many oil and gas platforms rise above the waves; the barnacled legs of these attract schools of speckled trout and their cousins, the sand trout. Those who like to fish with live bait at anchor take a share of this bounty on serene, emerald waters during the doldrums of summer.

But the majority of people who come to this area to fish inshore prefer to do so in shallower waters. The miles and miles of grassy flats starting in the northeast end of Corpus Bay behind Port A and running all the way to Nine Mile Hole are a scenic and revered state treasure. Many locals and visitors find thrills by burning, poling and power-drifting the shimmering flats aboard tall tower boats in search of redfish. Like the Lower Laguna Madre, the ULM has many acres of this type of terrain, divided down the middle by the intracoastal waterway.

The one real hole in the Upper Lagoon, just west of Yarbrough Pass, has depths that reach seven feet, providing fish a refreshing break from temperature extremes, especially under the searing summer sun. Just south of Yarbrough, the Land Cut, with its fish-holding ledges and the legend of the tide runners, is a place where skilled operators of trolling motors paired with drift anchors can experience the fishing trip of a lifetime.

And though the spoil banks and shorelines of the Laguna Madre from Nine Mile Hole to the Boat Hole are consistently productive and among the best places in the Corpus area to catch trout and redfish, there's one other place available to us that is unlike all others in the state. It is, of course, Baffin Bay, with its sprawling sand bars, miles of grass flats and ancient, rare rock formations.

Several factors make Baffin a world-class haven for trophy trout. The salinity level is high and relatively constant when compared with upper coast bays. Since resident trout don't often have to adjust their swim bladders to compensate for regular changes in salinity level, they convert more ingested energy to growth.

Secondly, since it's warmer here than farther north and east along the coast, more days in the year allow the fish to grow rather than go dormant. Furthermore, Baffin is a vast, deep and treacherous bay that's hard to access easily, protected by miles of undeveloped shorelines on virtually all of its sides. There's simply less fishing pressure per acre in Baffin than in many other bays, especially on the deep rock piles where some magnum trout spend much of their time.

All these things help define Baffin and its satellites as the premium place to find bragging sized trout. Back when Pluggin' Shorty and Chatter Allen were still chunkin' and windin', ten pounders were more common than they are now, but in this famous hypersaline estuary, it's still possible to catch numbers of trout over seven and eight pounds on the same day. That just doesn't happen much at all in the rest of the state.

For trophy trout nuts like me, Corpus Christi is truly the best place in the world to be. Here, I encounter some of the biggest members of the species, and they are available throughout the calendar year. Yes, the Lower Laguna has giant trout too, and when the fishing's good there, it's equal to the fishing anywhere. But without Baffin's deep structures and protective shorelines, and the added advantage of access to Corpus Bay and its satellites, the other end of the Lagoon will never be as productive for big trout in all seasons as are the waters up here.

All coastal bay systems have their beachfronts, jetties, back bays and open waters. But none in Texas can compare to the Corpus/Laguna Madre/Baffin system in sheer size, beauty and variability of structures, types of terrain and options for fishing opportunity.

Even the names resonate with pregnant possibility. Fishing in destinations like The Graveyard, Rocky Slough, The Badlands, Cathead, Dead Man's Hole, the King Ranch Shoreline, Shamrock Cove and The Devil's Elbow creates a sense of anticipation that exceeds any I've felt elsewhere. These are but a select few of the famous places that put the Corpus area on the map as perhaps the premiere saltwater fishing destination in the Lone Star State.