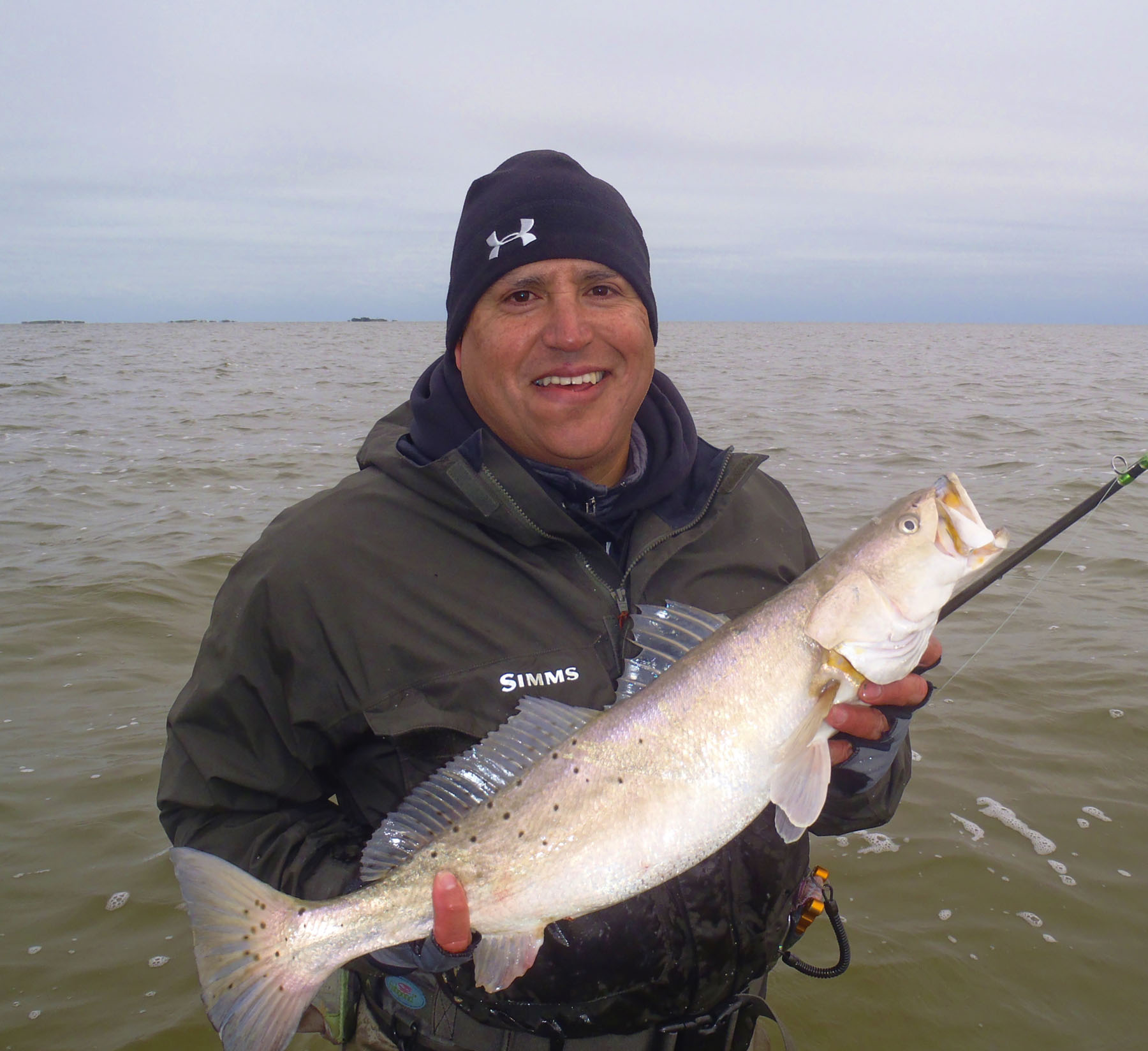 Rudy Keilman showed persistence and a patient mindset on the day he caught this 7.25 pounder. Such an attitude is generally necessary when cold temperatures first stun the fish in late autumn.
As I get older, one thing becomes ever more clear. Everything around us exists in a state of entropy. The concept can best be understood through a simple, yet profound statement: a system in order tends toward disorder. The heavy hands of Father Time ruin everything eventually.

Watch the news and the veracity of these concepts becomes clear. Cultures clash, empires fall, bridges collapse, storms, fires and other natural disasters reduce shiny cities to dust and rubble. A compelling argument can be made for the fact that this human culture in which we play a part, this technologically advanced civilization continually tends toward greater and greater levels of disorder. I can't really accept the notion that our civilization started out "in order," but I do believe it perpetually tends toward greater disorder.

Certainly, the effects of entropy can be felt individually, by all human beings with brains capable of reason and discernment. For instance, I could dunk a basketball with both hands well into my thirties, but now, I can barely leap over a pair of stacked phone books. Physical skills and stamina fade as we age; any idiot can perceive the slippage. For many of us, our personal relationships also show a tendency to fall apart over time. Note the high divorce rate in our nation, for example. Also, think of the way people move apart and lose track of each other as time scours us with ever-shifting sands.

The motivation for this piece came to me slowly, as a cumulative effect of many observations related to the things I possess and use. As I type, my truck needs a new set of tires, and the cloth on the driver's side seat has a tear in it, which allows foam rubber bits to continually crumble off and litter the floorboard.

The trailer underneath my boat bears scars from sitting covered in salty brine day after day in the bright sunshine. Corrosion inevitably occurs in these environments. My Haynie could use some gel coat work and other cosmetic enhancements; it serves me well, as a loyal workhorse, but it does show its age clearly.

Two of my fishing rods have eyes which need replacing, and all my reels include replacement parts. In fact, I have a closet full of worn out reels, which I keep around to use like a private junkyard, for parts. Speaking of a junkyard, I now see my wading gear and equipment.

My rusty pliers prove stiff to manipulate; the blanched Simms jacket I use to brace myself against the wind and rain bears permanent stains. My wading boots have holes in them, and the soles need to be replaced. Better yet, I need to throw them away and get a new pair. I've already turned my waders inside out and repaired pinhole leaks numerous times. This is one of the prices we pay for living; things must continually be repaired or replaced.

In his famous, poignant novel Brave New World, Aldous Huxley created a fictitious, profoundly recognizable society which abandoned Protestant work ethics and values, replacing them by celebrating greed and the need for instant gratification. The people in his fantasy culture lived by crazy creeds, including ideas such as "ending is better than mending" and "the more stitches, the less riches." Both these concepts starkly contrast conventional Christian proverbs such as "a stitch in time saves nine" and "a penny saved is a penny earned."

Huxley's perverse, imaginary world essentially embraced entropy and tried to ride it like a never-ending wave toward an ever-distant beachfront, whereas the Protestant Christian model attempts to fight against it at all times, to continually plug holes in the dike. Who among us has not witnessed road crews slathering hot asphalt over rough roads? As a culture, we tend to believe in Band-Aid cures, in borrowing more time in the perpetual battle with the impending decay of everything we see and know and love.

Significantly, both Huxley's civilization and our own actively acknowledge the state of entropy as a governing force, though the reactions to the acknowledgment and corresponding philosophies of the two contradict each other. For the purposes of this discussion, the significance of the reality of the condition of the world supersedes the response to it.

By now, the following question has likely arisen in the heads of many readers: what does all of this have to do with saltwater fishing? I will thank you here and now for indulging me to this point, and will reveal exactly how these tenets relate to the sport by which I make a living.

I could dilly dally some more and go into further detail about how saltwater corrodes equipment and compromises our abilities over time. But I will get straight into another, more important point. Systems tend to fall apart, but they don't do so in a linear fashion. The momentum of entropy exhibits ebb and flow.

The specific changes aren't permanent, but change is. We live in a world constantly in flux. Weather systems and climates alter over time. Winds shift, rise and subside; tides roll in and out. Populations of fish grow, then decline; algal blooms occur, rafts of sargassum weed arrive on the beach, as multiple, mighty forces collide.

These changes occur within two related dimensions, which actually become one–space and time. In other words, things move around as time passes, and their qualities evolve as they travel. The fishing Bible possesses its own set of proverbs; old salts quote them frequently. One famous epitaph says, "fish have fins and tails, they don't stay in the same place all the time."

Several related sayings emerge from the recognition that change dominates our reality. If fish feed aggressively for a while, they will eventually become full and won't open their mouths for some period of time. Conversely, if they sit dormant for long enough without eating, they will become hungry and will start champing at whatever swims by.

Likewise, if the fishing in an area holds steadily good for long enough, the law of diminishing returns will eventually dictate a downturn. Also, if a proven area stops producing because fish temporarily leave, one thing proves reliably true; fish will return again and the catching will improve.

Of greatest importance, these facts, when acknowledged and accepted, require astute anglers to constantly re-evaluate aspects of fishing situations, in the quest to maximize consistency. The evolved angler understands the strong need to fight against what I perceive as the most prominent shared trait among all human beingsthe tendency to resist change.

At its core, resistance to change results from our will to stay alive. While we have our health, while we live, we want things to remain the same. Change becomes a sentinel for our impending doom. Resistance to change potentially hampers our ability to adjust to changes quickly enough or intelligently enough to maximize productivity when fishing.

While things go well, and we catch plenty of fish, we tend to become lazy, and stop planning out what move(s) we will make when things inevitably become tougher. These "moves" might involve changing presentations, lures, strategies or locations. Assuming a good situation has permanence potentially turns stubborn into stupid. All good things will end; expert anglers anticipate those endings and react appropriately, knowing the only way to ride a wave is by staying ahead of its crest.

While things go poorly, and we don't catch fish, we tend to panic and want to accelerate the pace of change. Understanding the causes underlying tough fishing can help avoid a couple of common tendencies–running around looking for some magic spot and throwing every lure in the box, in the search for a magic bullet. Naturally, changing lures and/or locations enhances consistency at times, but doing so in panic mode rarely achieves any positive outcome.

The most important structural element underlying all intelligent, productive fishing decisions is an awareness of the location of the target fish on what I call the "feeding circle." Fish, like all creatures, feed at predictable times, within a repeating cycle. Understanding where targeted fish lie within that cycle at a given time affects decisions anglers make about how to cope when the catching slows.

Before one can make an educated guess as to how actively the fish are likely to be feeding, one has to acknowledge the existence of the feeding circle. For many anglers, this acknowledgment never occurs, because resistance to change ironically causes them to deny the cycle that governs the process. Such anglers seem always to expect things to come easier than they will, or if things do come easy, they expect them to stay that way longer than they possibly can.

Weaker anglers tend to talk about the glory days, when they always caught more and bigger fish. They also tend to rely far too heavily on a short list of favored honey holes, or sweet spots. Stronger anglers embrace change and continually fight to correctly assess how the dynamic forces which govern nature and life affect fishing situations season to season, day to day, hour to hour, moment to moment. The best acknowledge entropy, but constantly strive to put things back in order as best they can.

In its purest form, angling excellence involves creeds related to both the Protestant ethical codes and those held dear in Huxley's Brave New World. At times, the only way to truly "fix" an unproductive fishing situation is to recognize the need to scrap a plan and make a major adjustment; in other words, to throw something which once worked out and get something entirely new. At other times, the fix involves making subtle repairs to a damaged plan. These decisions can only be made correctly by those who not only accept the realities imposed by entropy, but who also recognize multiple ways to react to constant change.