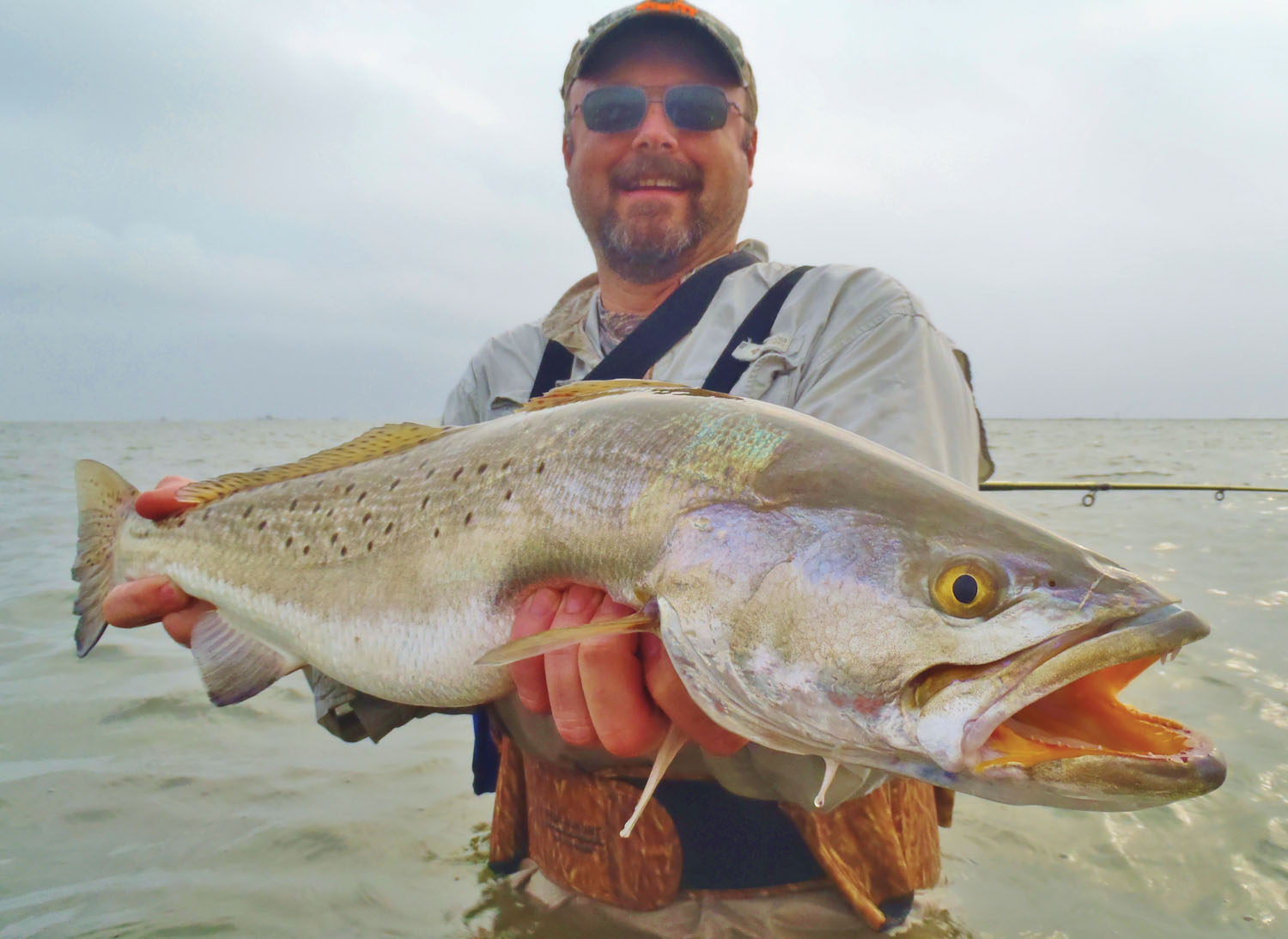 Angler Tim Zbylot caught some impressive specimens in April while fishing with Captain Kev.  This one proved particularly photogenic.

Formulating a sound strategy provides a foundation for success in the quest for angling consistency. Working the plan thoroughly and thoughtfully further tips the odds toward a favorable outcome. Sometimes, abandoning an original blueprint for a secondary plan becomes necessary, so leaving the dock with a fallback strategy in mind increases the chances of catching consistently. Occasionally, my experiences in other activities verify truths like these.

The following events bear relevance to these tenets. During the 2015 fall migration, my birding buddy and I received a reliable report about a rare bird spotted on Chapman Ranch, south of Corpus Christi. We wanted to add the species to our year and life lists, because it visits Nueces County infrequently, so we headed to the location where our friend found it the day before. While we traveled to the site, we learned he had seen one earlier in the morning on the day of our visit, so we believed it would still be present.

In such a situation, patience proves invaluable. First, one should thoroughly investigate the designated location, in attempt to locate the target. Knowing that, I and my friend spent most of an hour scouring the trees, power lines and open areas immediately surrounding the old post office in "town." We slowly patrolled the area, scanning for movement, listening for the call of the bird(s). Though we did locate several other species, some of which proved difficult to see, we could not find our Say's phoebe.

Disappointment settled upon us as we realized the bird had moved on. Eventually, we concluded staying within sight of the buildings at the center of town would not likely produce an encounter with our target species. Knowing the bird had probably not flown too far yet, I elaborated a new, specific plan. My years of trophy trout fishing likely helped me formulate the idea spontaneously.

"Let's don't give up," I said. "We've done our due diligence right here. Seems like the phoebe isn't around anymore. The best thing we can do now is hit as many of the sweet spots we know in the immediate area. We will have our best chance of locating it in those reliable places."

We then proceeded to a corner of a remote road which ends at a gate leading into a private part of the sprawling King Ranch. In this small space, we almost always find a "good" bird, if not two or three. A variety of species-rich habitats intersect at the spot, providing ripe opportunity on a consistent basis. A thicket of tangled brush lies on one side of the road, a wide-open expanse of marshy field on the other. Under the road runs a boggy creek, with numerous trees and bushes hanging over the shallow water.

When we pulled up to the gate that day, we made sure to move slowly, in order to give the spot time to produce in its usual manner. We kept our eyes focused on the fence lines and tree tops. Phoebes catch flying insects to eat, so they like to perch on relatively high places overlooking areas where bugs congregate. Once they spot a potential meal, they fly quickly off to chase down and catch their prey, then return to the perch to sit and eat.

The first bird we spotted proved to be a similar species, a young female vermillion flycatcher. In fact, she tricked us into thinking we might have found our Say's phoebe. While attempting to verify the identifying features of the vermillion, we noticed another bird atop the fence a few yards away. The pale, salmon-colored belly, dark brown back and bobbing tail matched what we expected for our phoebe. Eventually, we captured several pictures and video clips which positively identified the second bird as the one we'd come to see. The whole turn of events provided us a great sense of satisfaction and accomplishment. We lingered for quite some time, attempting to properly document the encounter, knowing we might never see the species in our home county again.

I soon realized the profound connection between these events and those I experience while tracking and targeting trophy trout in my life as a fishing guide. I have noticed many connections between birding and fishing, including this need for a strong fallback strategy when a first attempt to follow up on a legitimate lead fails.

All anglers ideally benefit from the reports others give about the location of the fish they target. Anyone who's fished more than a few times has likely experienced a situation in which they've gone to a specific place because someone they trust told them they had caught fish there recently. In some cases, the catching comes easily in the location, rendering the need for a back-up plan obsolete. But, on other occasions, things don't turn out as planned.

Several factors affect the specifics of a situation in which people attempt to follow up on a report and catch fish in a location provided by someone else. The trust one has in the reliability of the report carries significance. Only experience can reveal the likelihood of the veracity and accuracy of the information gained from another. Trusted friends and partners of established reputation and ability inevitably provide more specific and dependable information than casual acquaintances.

The level of detail included with the report of the events also affects the strategy. Chasing after a report which says "we caught a bunch off Green's Cut" or "had big fish on the King Ranch Shoreline" probably won't turn out positively on a consistent basis, but when ample details reveal the precise location of the catching of a specific number and size of fish, one can reasonably assume a higher likelihood of reproducing similar results if they get to the spot soon enough.

In the best case scenario, weather and other environmental factors create conditions similar to the ones experienced by the person providing the report. If conditions change too much, the utility of a report can easily be compromised. The passage of a cold front, dramatic changes in tide level or movement, or any significant change in wind speed or direction can render a prime location temporarily useless.

But assuming the report seems reliable, detailed enough to follow accurately, and that the conditions remain much the same as during the time-frame in which the person giving the report made the catch, a specific strategy comes clearly into play. Thoroughly and patiently attempting to repeat the catch in the precise location becomes the first order of business.

When working this original part of the plan, anglers with the most complete knowledge of the layout of the spot have the best chance for success. Such knowledge allows for targeting small-scale "sweet spots" in attempt to locate the fish. Knowing the tendencies and/or specific strategies used by the person providing the report helps too. All aspects of this can prove significant, everything from lure or lures used, presentations made with those lures, parts of the area targeted, direction and pace of movement; the more detailed the information used as basis for repetition, the higher the likelihood of repeating an outcome.

Once a thorough attempt has been made using strategies similar to the reporter without achieving the desired result, common sense dictates making systematic changes to the plan. Making slight alterations to strategy in the form of lure choice, presentation, parts of the area targeted and pace/direction of movement could all result in locating and catching the targeted fish in some cases.

If those slight alterations don't produce bites, resorting to the fallback strategy will sometimes save the day. By this, I mean moving to a proven, productive sweet spot or spots within a reasonably short distance and deploying similar strategies in the place(s). Ideally, one or more sweet spots nearby share common defining features--water depth, proximity to shore, structures present and types of bottom cover. The one to target first would have the best long-term track record, in terms of production of the type of fish targeted in conditions similar to those in place when the reported catch was made. In this way, the birding experience I recounted does not match the angling truths, because I had never seen a Say's phoebe in the sweet spot I chose as a back-up to the reported location of the sighting.

But after locating the species on Chapman Ranch that day in November, I realized I had operated using the same basic principles on which I rely while fishing, without really thinking about it in detail. Because I have done this same thing so many times in a couple decades spent chasing trophy trout, the move felt like instinct to me. Analyzing it later, I realize it's really learned behavior. And though I don't have to think about such a plan in specific terms while implementing it, I know novice and beginning anglers should do so.

In order to make this fallback strategy work consistently, one must first compile a list of sweet spots which have proven track records. Doing so takes time and effort. One must also develop a sense of how long to sustain an effort in each place, acknowledging the season, weather and other environmental variables.

In fishing, relying on the fallback strategy proves more complex than in birding, without question. But the structural similarities outnumber the variations, in the end. When following up on a report in a location where someone reported catching fish recently, it pays to attempt to repeat that catch. If a thorough attempt proves fruitless, moving a short distance to a similar, proven spot makes more sense than searching for the fish randomly in unproven places.