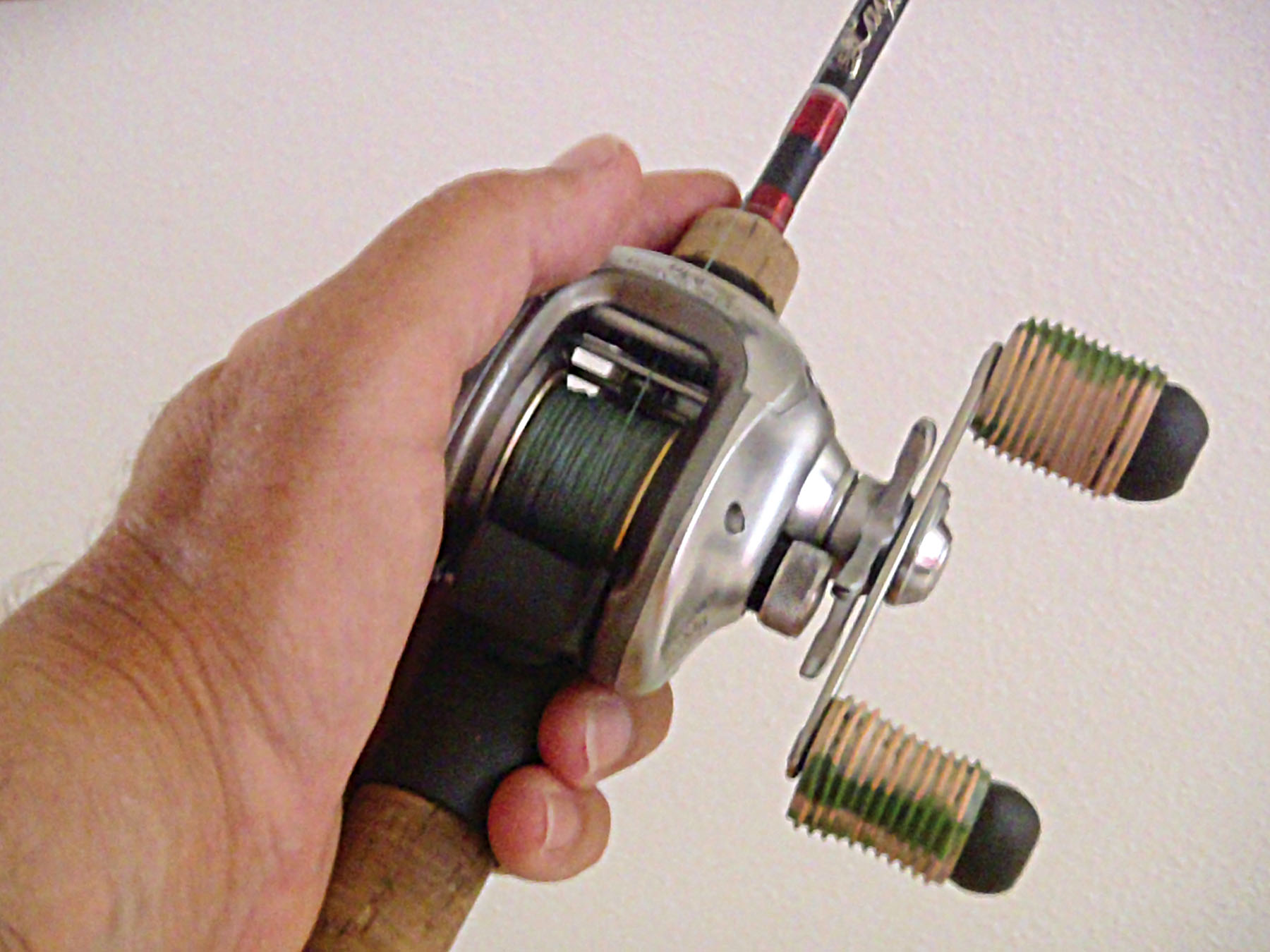 Cradling the rod and reel in the hand in the manner shown here prevents fatigue and allows for maximum control of presentations.

Many structural similarities exist among sports of all kinds. I see a particularly strong connection between two of my favorites: light tackle lure fishing and the game of golf. In both endeavors, success is achieved first and foremost through the purposeful application of sound fundamentals.

Fundamentals lay the foundation for a solid game; when done correctly, they result in more bites and better shots. Success in any sport (even one that isn't competitive at its core) is quantifiable in some way or another, either by score, number of points accumulated, fish caught, etc.

Sports are about results, outcomes and products. Winning, or putting up big numbers is the ultimate goal, but optimal performance comes from focus on process, not product. Staying "in the moment" and concentrating on the task at hand is critical to success. When studying and playing golf in my teens and twenties, I learned that grip, rhythm and alignment are the most important aspects of the swing, because they set up all well-executed shots.

It might come as a surprise to some, but I believe the same fundamentals are critically important in light tackle angling with artificial lures. Of the three, grip is probably most important in golf, while alignment might be more significant in lure fishing. It's debatable which is number one on the list of prominent principals, but all three of these fundamentals affect where shots wind up and how many fish are caught.

Grip is important to a golfer or angler because it's where one physically contacts the tool with which the scoring is done. A proper grip sets up all other aspects of the swing, or cast and retrieve, leading to a better chance for good shots or presentations. When lure fishing for trout, I use a low-profile, level-wind reel mounted on a feather-light rod between six and seven feet in length, the best tool for this kind of fishing, in my opinion.

I hold my rod and reel in a manner which is most comfortable to me and which gives me greatest control over the movements of the tool, cradling the reel just above the center of my palm, with my thumb lying along the upper edge of the side plate. The trigger at the base of the rod's reel seat is clutched between my ring and pinky fingers, with my ring finger contacting the exposed portion of the blank to better facilitate detection of light strikes. My index finger extends forward along the small piece of cork fronting the reel seat. All of this creates a snug, secure connection to the rod and reel, without placing my hand in a cramped position.

As I was taught to do in golf, I maintain light, steady grip pressure when fishing. The best analogy I've heard to describe this pressure is that it's like holding a small bird in your hand, with enough pressure to prevent its escape, but not so much as to harm it. Too much grip pressure will create tension in the forearms, causing fatigue over time and making it more difficult to execute rhythmic presentations.

Executing great shots and presentations generally doesn't involve anything awkward or stiff. Rhythm in the golf swing is best achieved when the muscles in the hands and arms are relaxed. Similarly, rhythmic movements of the rodtip are easiest to create and maintain when the hands are set properly on the rod and reel and grip pressure is light.

I've observed that expert lure chunkers mainly use rhythmic presentation styles, no matter what type of lure they are using. The presentations do vary, but most share a common characteristic; they involve repetitive and rhythmic movements of the rodtip. Also, the tip of the rod rarely, if ever, moves behind the butt of the rod.

Keeping the tip of the rod between the reel and the lure allows for the maintenance of tension on the line. Some experts use radical presentations that involve throwing slack in the line, but when executing those presentations, they almost always keep the rod's tip forward of the butt. Conversely, I've observed numerous novice anglers making presentations with long, sharp jerks that move the butt of the rod forward, causing a loss of tension in the line.

Loss of line tension results in loss of lure control and dictates a longer lag time for hooksets. Slack in the line also creates difficulty in detecting bites. Anglers whose presentations techniques create slack in their line are likely missing some fish that take the lure and reject it before they can react.

Poor alignment can have a similar effect on the ability to elicit and detect strikes. In golf, alignment refers to the placement of the feet, hips and shoulders in relation to the target line. In fishing, the position of the body and rod in relation to the line can and will vary greatly. Alignment in this sport refers more to the direction of the fishing effort, not so much to how one physically sets up that effort.

In other words, alignment in lure fishing describes the direction the lure is cast and moved through the water in relation to underlying structures and direction of wind or current. Keeping a lure moving along structural edges rather than across them is generally more productive. Also, it's usually best to move a lure crossways or directly with wind or current, especially if the wind and/or current is strong. Fish tend to face or swim into a current, and moving a lure toward them from out front is often more effective than bringing one into their scope of vision from behind.

Predatory fish which feed primarily by sight are accustomed to looking forward (and up in the case of trout) when scanning for potential prey. Moving a plug into their field of vision gives them time to prepare to strike, and fits into their natural feeding patterns. Prey moving into sight from behind them is not likely a phenomenon which often occurs naturally. Similarly, it seems unnatural that a wounded baitfish would struggle against a current or swim directly over the top of windswept waves.

Controlling the specific direction of the movement of the lure plays a critical role in tricking a fish into mistaking a plastic plug for easy pray. Presentations which make the plug appear to be a real, distressed fish will trigger more strikes. Those presentations result from the combination of the direction, speed and movement patterns of the plug.

Presentations are to an angler what shots are to a golfer. In golf, consistently executing quality shots allows one to move precisely and efficiently around a course and shoot a low score. In lure fishing, presentations metaphorically replace those shots and dictate how many fish are caught. Effective presentations are most consistently produced by those who've mastered three critical fundamentals: grip, rhythm and alignment.