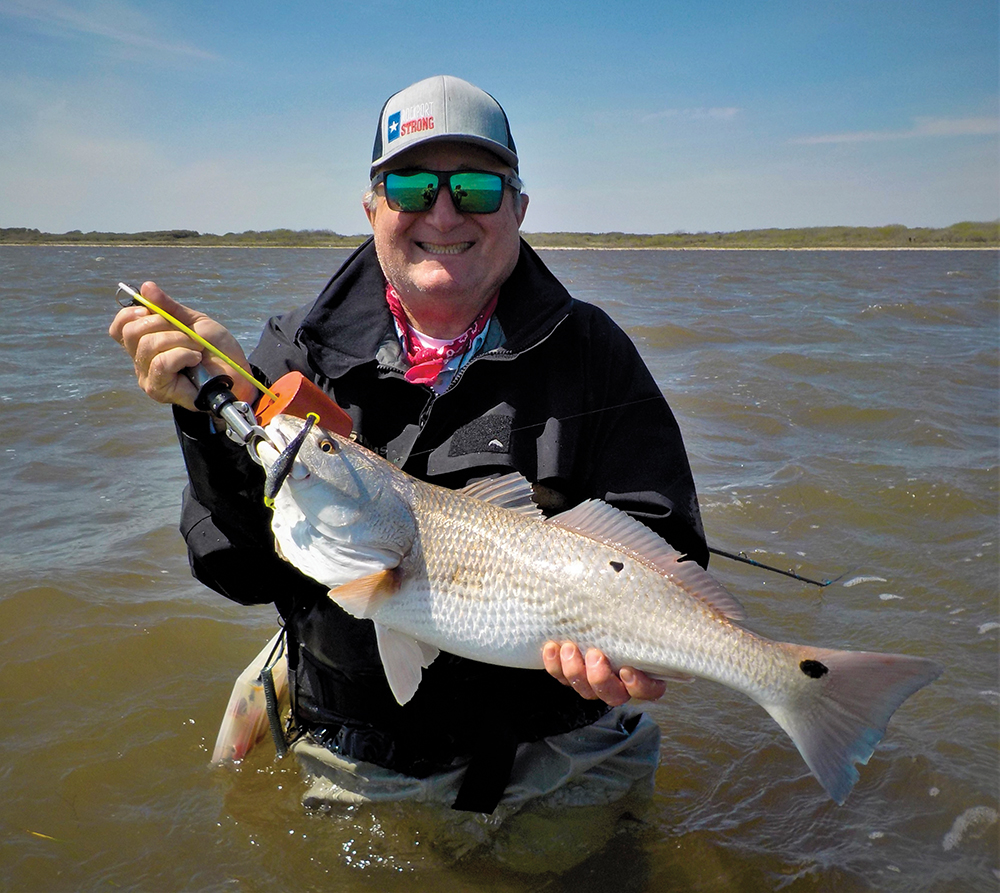 Brett Taylor caught this hefty redfish on a windy day, while fishing with the captain.

While I dropped the boat in the water just after daybreak, a moist March wind whistled off the Gulf. Headed out to fish a little in anticipation of several upcoming charters, I idled around the sand bar fronting the hole behind the ramp, planed off and took a sharp right, heading into Nighthawk Bay. My old friend Jesse Arsola and I had been catching some pretty solid trout for a couple weeks on shallow flats in that part of the Upper Laguna Madre.

As I headed toward South Bird Island, I saw Jesse's TranSport parked in one of his favorite spots, so I pulled up to the south and east of him, in a relatively deep part of the flat, adjacent to a set of the tall, white sand dunes which serve as symbols of North Padre Island. After jumping out, I tied on a green Paul Brown Fat Boy and began casting in wide circles around my path, as I moved away from the boat. Soon, in the clear water, the rising sun illuminated potholes and grassy edges on the ample flat.

Out in front of me, in the distance, I could also see my friend. Like most people, I prefer to fish with the sun and wind on my back, and the light behind me created the perfect perspective for keeping an eye on my buddy. Before long, I began getting bites along the transitions from sand to grass, not every other cast, or even at what might be described as a fast pace, but I had already caught two or three trout weighing four pounds or more when I saw Jesse hook his first fish. A twinkling ball of foam erupted beside him, as if in celebration of his hook-set.

Both of us began catching at a slow, yet steady rate, for the next hour or so, while the sun climbed above the crests of the fluffy dunes. After catching a trout which looked big even across the numerous yards lying between us, my amigo turned to look over his shoulder, so I knew he realized I had parked behind him. Eventually, the bite ground to a halt and neither of us caught a fish for a half-hour or more, and I watched Jesse wade back to his boat and climb aboard.

His next move initially puzzled me, as he began idling toward the sand bar extending out from the stretch of the east shoreline between us. When his hull bumped bottom, he put his Power Pole down and jumped over the gunwale, then began walking my way. I realized he intended to come over and say something, so I walked out of the depths onto the bar and started toward him.

We met there in the light of the late-winter sun, while the warming breeze caressed our cheeks and caused his long, dark locks to wave like a tattered flag. While our right hands clasped in a handshake, I noticed he held something clinched in his left fist. “What's up?” he asked with a smile, in his familiar way. The question wasn't a question, really. He could see exactly what I was doing. “I just let a big one go,” he claimed. “Didn't catch anything until I put on the E.D. Then I caught two sixes and the big girl. She was about 29, weighed eight and a quarter.”

While he told his story, he extended his left hand toward me and opened it to reveal three lures, identical to the one he'd used to catch his fish. The gold, broken-backed, floating and diving crank baits all had teeth marks on them, and hooks showing signs of wear and tear.  I viewed these as encouraging signs—any trained eye could tell these lures had proven themselves capable of earning strikes. “Take a few of these,” he proclaimed.  “They save me all the time when I'm on charters; on lots of days, they catch fish when other lures won't.”

I smiled and thanked him.  Already aware of his love for the custom plugs, ones bought and altered by a famous angler from the Matagorda area, then resold to people like Jesse and his friends. I'd tried them before, without much luck. My spastic, twitch-heavy style doesn't translate well to lipped lures with built-in action. I did take what he offered, but couldn't resist mentioning what I'd already caught.

I wanted him to know he had one thing wrong. The fish would bite other lures; I'd already caught five trout between 24 and 26 inches on my Fat Boy! So, grinning, I shared those details. His chest heaved as he laughed in his deep-throated way. “You never know, I guess.  I couldn't make 'em bite my Fat Boy. I tied one on first thing,” he admitted. We parted ways then, heading to other places to fish a while longer. Ironically, we both returned to the dock at Bird Island early, realizing we'd accomplished our goal for the day.

Remembering this story urges me to ruminate on two concepts. One relates to the tendency we have to think something we discover holds a special kind of magic for the day. In other words, when we find a productive pattern, we're tempted to think we've found the only one, or at least the most productive one. I suspect that usually isn't the case.

Later, I recalled the day in Nighthawk while watching a televised bass tournament. The top ten competitors in the event all weighed over 100 pounds of fish in the four days! Cameras documented an important fact—three radically different patterns produced these impressive bags of bass. Some of the guys dropped whacky-worms straight under their boats, probing ledges at depths of over twenty feet, while others pulled medium-diving crank baits through the tops of submerged trees and caught their bass in depths of about twelve feet, and a third bunch threw spinner baits at exposed bushes and stumps to trick fish in three feet of water or less. When interviewed, some of the contestants revealed they clearly thought they'd found some kind of uniquely productive pattern, the only one which could possibly produce such gaudy results.

With the advantage of multiple perspectives provided by the camera lenses, viewers knew better. The event reinforced the concept for me, proved it beyond the shadow of a doubt.  Many times, in many places, and with many kinds of fish, multiple productive patterns exist simultaneously. In essence, the job of an angler involves discovering one of those patterns and tweaking the details related to it properly, to maximize results.

In most cases, testing this theory would prove frivolous indeed. When a captain reveals a productive way to catch fish, searching for others makes little or no sense. Unless the day's goal involves preparation for an upcoming, competitive event, one has no legitimate need to identify several different productive patterns which work in widely different types of locations and depths.

For most of us, such a need does not exist. Jesse and I ventured out that morning with the goal of proving the big trout we'd been catching in Nighthawk Bay still swam around there in great enough numbers to justify taking our clients to the place on coming days. Clearly, we achieved our aims, though we did so in subtly different ways.

All this matters to a fishing guide. But what matters more to me now is the other concept the story causes me to consider. I'll never forget the way Jesse lived his life. His conscious decision to turn away from some big trout, park his boat and trudge through the water just to help me out clearly reveals the spirit of the man I knew. I'd give most anything for a chance to relive the moment when we connected in the shallows, on a gleaming stage of hard, white sand.

My response to his offer lacked grace. I failed to seize upon the ripe opportunity to repay his willful act of kindness with an appropriate dose of gratitude. I should simply have nodded and thanked him, paid his gesture back in kind, instead of trying to make some subtle point about the art of catching fish. My ego got in the way.

Alone, each of us navigates through shadows in the same valley, knowing every fork in the road inevitably leads to a box canyon. While we go, some of us take more meaningful steps than others. People who carry family and friends on their shoulders have more reasons to keep pushing themselves down the pathway.

It's hard to believe, but half a decade has elapsed since my old buddy passed away. He still influences me to this day. Sometimes, when I pass one of his favorite spots, I hear his throaty laugh echoing in my mind. A man of boundless good cheer, he exuded positive energy, which people seemed to squeeze from him with handshakes and hugs.

In retelling this story, I wish to honor Jesse one more time.  I'll do so by encouraging everyone to share what they know, be a loyal friend, shake the helpful hand of unity.  We should all do our best to pay it forward, while we can.  In doing so, we pay tribute to my dear, departed friend.