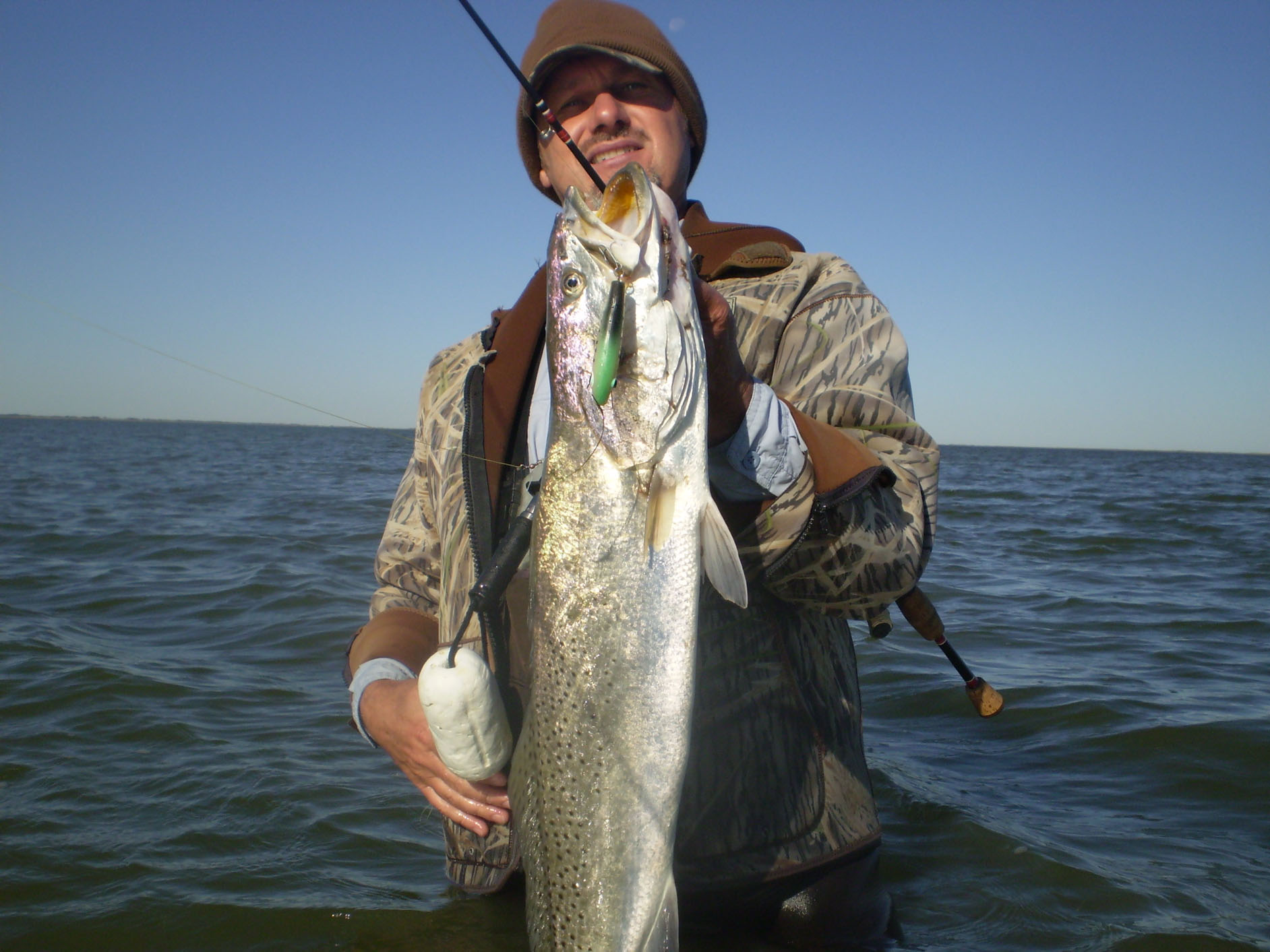 Over the last few years, many people who fish for trophy trout in the Baffin Bay/Upper Laguna Madre system have developed what I call a "February obsession". This attitude is borne of more than myth and legend; real, significant factors spur developing novice and expert anglers to make annual pilgrimages to this area during the calendar's second month.

Fishing reports reliably reveal that monster trout living in these bays lurk among the rocks and grass, ready to pounce on passing plugs under morning mists which commonly blanket the area in late-winter. Particularly during the second half of the month, numerous jumbo specks inhabit shallow locales, and they're susceptible to the efforts of patient pluggers.

I've had some incredible catches under Valentine's moons. It's the easiest month for me to completely book, given my reputation as a persistent trophy chaser. But some might be surprised to know that January, not February, is statistically my most productive month for catching trout reaching or exceeding twenty seven inches in length.

I don't think of twenty seven inch trout as true trophies, and my customers and I don't keep fish of that size at all. Trout in that class are not really "wall worthy" in my estimation, but they are worth remembering, and I've drawn the line there in my record-keeping habits, having documented an accurate count of how many big trout I've caught ever since I started catching them. Certainly, trout stretching to twenty seven inches and longer are more fun to hook, land and handle than are smaller fish!

In my career, more than seventeen per cent of the trout over twenty seven inches I've personally caught were landed in January. The second most productive month is February, with just under sixteen percent. Those figures are significant, given that the law of averages would suggest a figure slightly above eight per cent, if all months offered equal trophy catching potential.

Furthermore, I do more fishing in some of the other months than I do in January. The number of big trout I catch per hour of effort in this frequently frigid span is easily three times as high as in most other months. When the line is pushed closer to the thirty inch threshold, the stats are even more impressive; nearly twenty three per cent of my trout over twenty nine inches came to hand within this thirty one day period.

Thinking back over my best January outings brings to mind two contrasting trips. One occurred last year, on a dreary, drizzly day which might easily serve as a prime example of what we trophy freaks typically think of as optimal winter fishing weather. A passing Pacific front had low clouds racing overhead, and a north/northeast breeze around fifteen knots made the low-fifties air temperatures feel even colder.

For most of the morning, the fishing was tedious. My client, Keith Montague, and I stopped at two spots which had been producing big fish for the previous two days, but we were having little luck. He'd caught just one twenty four incher when the clock neared ten a.m.. Corkies thrown at shallow potholes on the bank had been doing the trick all week. On that day, though, the bait in the spots was conspicuously absent, and the wind was mucking up the water some and scattering floating grass where the fish had been.

So I made a move to a more protected stretch of shore, and while we anchored, we both noticed mullet jumping all over the area, close to the bank and in deeper potholes farther out. I told my client to take the inside, and I waded out, so we'd have a better chance to find fish. For another solid hour, we got no bites, but I remember saying, "We ain't going anywhere; there's no floating grass in here and there's just got to be some big fish around all this bait."

Eventually, working my red shad Fat Boy through some barely visible potholes, I felt a hard whack and caught my first fish of the day, a seven pound, twenty eight inch trout. We smiled and congratulated ourselves for showing such patience, then proceeded to focus all our efforts on the chest deep sandy pockets. Over the next three hours or so, we hooked, fought, lost, caught and released an impressive number of long, dappled and seemingly ravenous trout.

I can't say exactly how many fish we hooked or landed, but I know that eleven of them were measured and shown to exceed twenty seven inches; eight of those weighed over seven pounds. My best ten fish weighed sixty six pounds. Once located, the trout were not at all hard to catch; in fact, I hooked two while I had my rod tucked under my arm taking pictures of Keith's fish. Many of the bites were signaled by shockingly strong thumps; a couple of the fish threatened to loose the rods from our numb, gloved hands. We tried topwaters a couple of times, but quickly switched back to dark Fat Boys when the blow ups didn't come easily, and we also gave soft plastics a shot, but the bite seemed slower on them too.

The trip reminds that often, locating the fish is much more difficult than catching them once they are found. All of our trout that day came from a slender set of potholes lying parallel to shore, well away from the bank, much farther from land than the places the fish had been on prior days, though the water temperatures were much the same. The bait did help us, correctly indicating the presence of fish in the general area, but without leading us straight to them once we left the boat.

In terms of the bait leading us to the fish, last January's banner trip reminds me of one which occurred several years ago, on a day with much milder weather. On that occasion, warm air and light onshore winds preceded the arrival of an Arctic front, and a grand bite broke out when the winds first shifted. We'd been fishing around a thick raft of bait all morning and were reluctant to leave the area, though we'd caught only a few dinks and keeper trout. Then, while a moderate north wind blew for about an hour after the front hit, things changed and the big trout became almost easy to catch.

They were chewing readily on topwaters; I caught several bruisers on my bone Super Spook, including a thirty incher and three others over twenty eight. During the flurry of aggression, big specks lined up on a subtle mud/grass contour, repeatedly snapping at the starting and stopping plugs until they became pinned to their lips.

Sometimes, whopper specks will attack floating lures with reckless abandon in January as they did on that day. On other occasions, Corkies and soft plastics will reveal the presence of trophies when they won't rise so high to take the bait. Either way, this mid-winter month is ripe with potential for some of the best outings of the year for those of us who love to tussle with the old yellow-mouthed sows.

The weather on such unforgettable excursions might be blustery and downright nasty, or it might be meek and mild. These days are often defined by a contrast between relatively long lulls and short-lived frenzies. Mostly, we recall the cool sensations that adorn the hot bites. Our minds record the thumps, the whacks, the slurps and the splashes, along with the silvery flashes we glimpse when the prized fish rise and thrash.

And of course the laughter which inevitably accompanies such rare and precious flurries. Yes, we'll remember the wide smiles and the laughter; like elixirs, they warm our skin and soothe our souls, blocking out the numbing effects of the cold and temporarily erasing the memory of the slow stretches when we could not coax a bite.