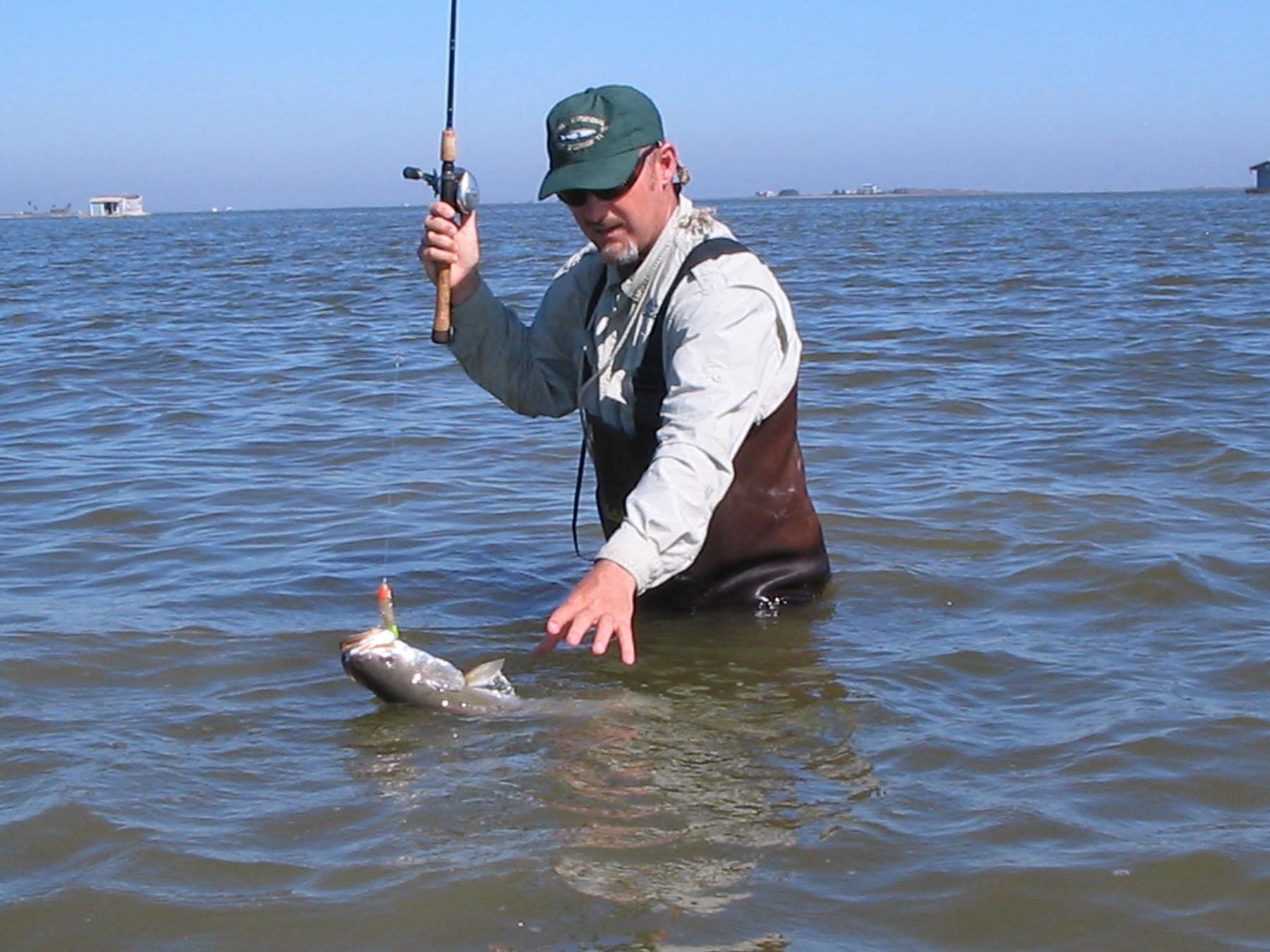 Bright autumn skies like the ones in this picture make for pleasant days on relatively uncrowded bays.

The following article appeared in this magazine some time ago. I have made additions and improvements to it since then. Writing works that way for me; the things I create are enhanced over time through scrutiny and revision. As I age and change, so too does my work. Some things never change, like the sentiments that form the conceptual basis for this piece.

As surely as the Longhorns will face off with the Sooners before screaming and faithful fans at the state fair, the marshes adjacent to Texas bays will drain, sending some of a year's crop of shrimp, crabs and little fish into the waiting mouths of upper-crust predators like trout, redfish and flounder. Seagulls will be hovering on site, their excited squawks testifying to their need to fatten up before winter.

All living organisms seem transformed profoundly by the onset of autumn. Whitetail deer go into the "rut", briefly altering their life habits in order to perpetuate their kind. Ducks and geese move on cue, riding the lead edges of the fronts onto our prairies, marshes, lakes and bays in an effort to avoid hard freezes in the northlands. To some outdoorsmen, the whistling of teal wings over marshgrass in early autumn is a kind of a sentinel, whispering of greater changes to come.

These fronts, the alterations in climate and the associated mutations within the animal kingdom kindle the fires of our deepest instincts as hunters and gatherers. The urgency of autumn residing in our cores also stretches out to the horizon, rides the breeze and pulses beneath the dimpled surface of cooling water.

With the arrival of brisk winds, trout and redfish follow flood tides into backwaters to feast before winter; flounder crowd into guts near marsh entrances and along shallow shoreline reefs. Gadwall lift gently off hidden lakes in the prairie pothole region and head south in loose, high flocks; men station themselves along fence rows to pluck passing doves from the sky as they return to water in twilight.

All living creatures are compelled to do certain things in order to survive. In the case of flounder migrating to the safe haven of the Gulf or redfish drumming in sandy currents outside the breakers adjacent to a coastal pass, the survival instinct is easy to read. In the case of humans seeking sport, it's a more subtle thing.

As the dominant species, we mutate in autumn primarily for the sake of the preservation of our spirit and souls. Few of us subsist off our efforts in fishing, hunting and other sports, but many of us benefit greatly from the rejuvenating effects of the onset of fall and the sporting seasons it ushers in.

Ironically, the hope and anticipation we feel are tempered by the knowledge that winter is on the way. The signs announcing the birth of autumn also hint that another year is one step closer to the grave. Chill winds fan slow fires that turn the colors of the leaves and eventually dry them and drive them to the ground.

Autumn is to the year as evening is to the day. Just when the fish begin to bite better and the deer appear among the shadows at the edges of the fields, the light fades away. We get that brief, frantic flurry of activity in the waning light, then the dark of night descends.

Yet in that otherwise bleak night there burns a guiding light, especially for trophy trout hunters in south Texas. While the hoopla over pigskin rivalries, the macho hunts for Muy Grande and the shared camaraderie known by waterfowlers hiding in brushed blinds draw others away from the bays, we keep on plugging in quiet solitude. When other sporting seasons end and winter settles in, our high times are just beginning.

Many of our best and most predictable outings happen during the cold season. Trophy fish are easier to pattern and feed with reckless abandon when they can. The anticipation of memorable catches in Jack Frost's months makes the fall ever more pleasant and poignant for us. Strangely, the bittersweet emotion brought on by the year's end is counterbalanced by the thrill of the arrival of our truest trophy season.

As I type, the days are getting shorter, focused flocks smear dark streaks across the sky, the bull tide stands poised to take its bounty to the open sea, whitetail bucks meet and collide in a secluded sendero, bands march to honor the colors of their teams, and a select few focused anglers head onto the bays in search of giant speckled trout.

Those of us who join the quest feel an ever-increasing sense of urgency. We race right by the working gulls and terns, past prolific flounder holes and redfish rodeos, only faintly aware of honking geese flying in formation over our heads as we make our way to the flats, rocks, reefs and drop offs, the haunts of the stars of our dreams.

The onset of winter drives us crazy with need. Just as stressed snow geese return every year to the same parts of coastal prairies after their treacherous and epic journey from the arctic, restless trophy hunters arrive in proven winter hotspots, waiting for circumstances to align, watching for all the right signs in weather patterns, time and tides. We will be there, chunking, winding, hoping for the fish of a lifetime to take hold of our hearts and fully stretch our lines. While we work and wait, the irony of autumn can be read both in the dying afternoon light and the growing gleam in our eyes!