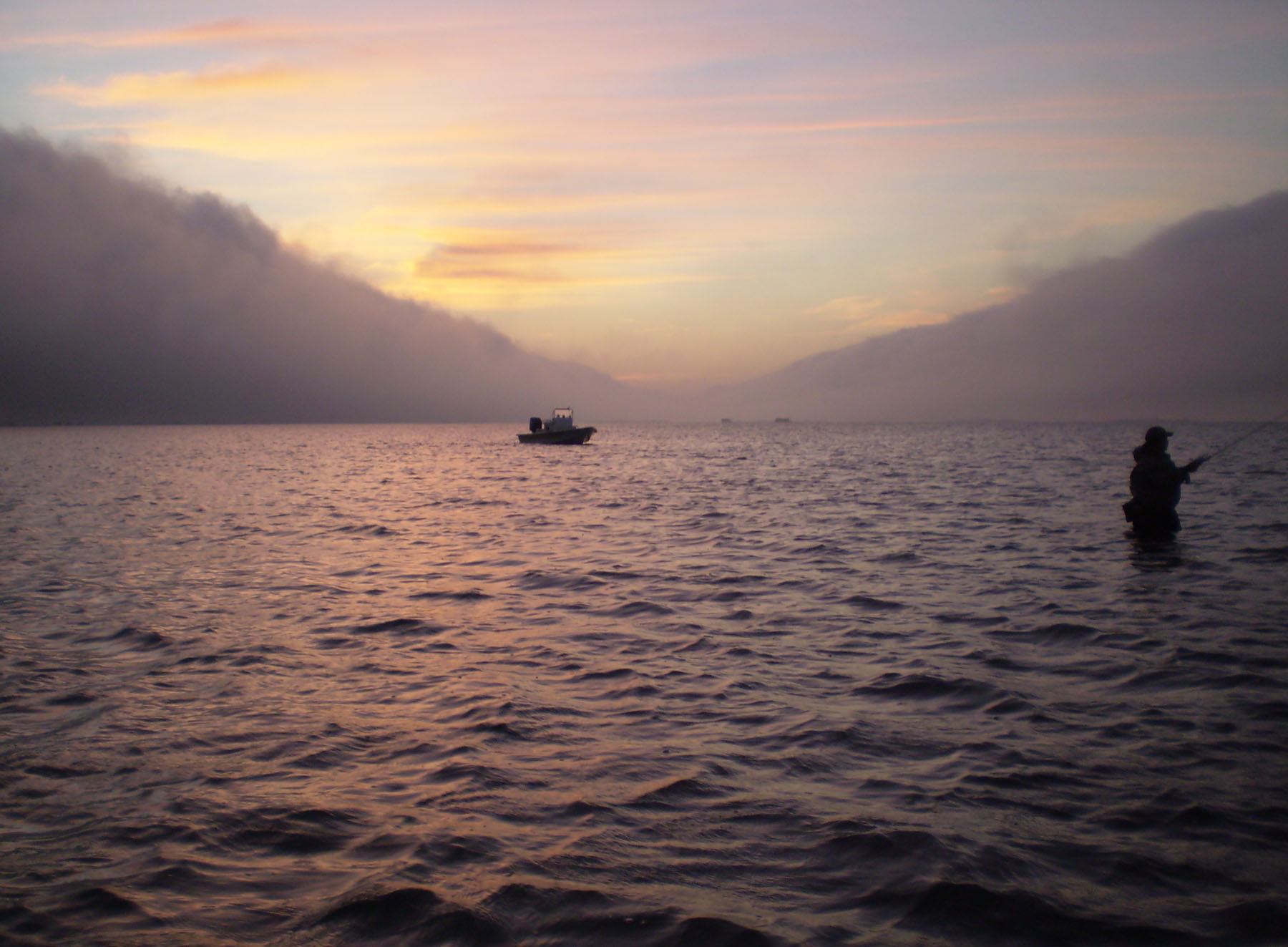 Author's note: This piece ignores one controversial fish locating technique--"burning" shallow flats in order to spot schools of fish. Currently legal, this method is practiced regularly by some, but is detested by others. Burning flats as a primary way of locating fish is, in my opinion, ethically marginal at best, and is sometimes clearly harassment of fish and other anglers, as well as being potentially harmful to sea grass beds.

Rigging methods, presentation techniques, lure choices and ways of fighting and landing fish vary among trophy trout experts. The old adage tells it right: "there is more than one way to skin a cat." Many aspects of the fish-catching equation fall mostly into the realm of personal preference.

Frequently, it's possible to fool the same fish with various lures and techniques, and if the hooks dig deep on the strike, any method of playing and landing those fish will work. In other words, the best anglers are able to dictate how they catch their fish some percentage of the time. Of course, at other times, tougher bite conditions limit what will work, elevating the effectiveness of some styles while diminishing others.

On windy days, the drifting angler slinging a stinky worm hung under a noisy cork might have his way; on calm ones, the stealthy stalker carefully stripping a fly past the nose of a fish on a shin-deep flat might outperform the drifter. But one thing remains the same, no matter how easy or tough the fishing, no matter how hot, cold, windy or calm the conditions.

The most important factor in catching fish is locating the fish. No angler can catch a fish that swims beyond the scope of his efforts. It's the reason, for instance, that most trophy trout seekers who fish exclusively on the upper coast will not break the thirty inch and nine pound marks. "If you want to find a dinosaur, you have to go to Jurassic Park!"

Many transient guides leave their home areas and venture south of the Kennedy Causeway into the big lagoon and its satellites in late-winter; they are adept fish locators and know they can't catch as many trout over six pounds elsewhere in the state. These guys accept the paramount importance of fish location and want to get in on the catching, so they go where more big fish live.

But simply coming to south Texas and setting up camp is only a first step in the fish location equation. The game is more complicated than that. Just ask any of the novice anglers who fish here on their own, only to leave puzzled as to what all the fuss is about. Some are downright skeptical about the place after they catch lots of small fish or not many fish at all.

The fish, especially the big trout, aren't everywhere, equally distributed throughout the region. During the warm period, particularly when all the water is in its naturally clear state, the fish can spread out over vast, shallow areas. In colder weather, they often become concentrated in relatively small spaces. Consistently, they prefer some specific spots time and time again. Knowing where the sweet spots are plays a big part in consistent fish location, but it's still not enough.

One year, fish pile up on a stretch of shoreline and prefer a given set of potholes over most of the others in the area; the next year, the same shoreline is virtually void of fish, though conditions seem the same. When such a thing happens, anglers with acute "on the water senses" will react quickly and appropriately and find fish. Others will stand and wait, casting at empty water, reminiscing about last year's action and scratching their heads for days.

Anglers who find fish most often are those who successfully complete all the steps in the fish location equation. When deciding which bay or general area to target, they take into account the biology of the fish and how it's affected by the season. Often, they factor in reliable reports from other anglers and/or logs from past trips. With an eye on the weather, they consider recent winds, tide levels and water conditions to narrow the search further.

Once a spot to be tried has been selected, and the angler actually arrives on the scene, the more difficult parts of the equation become elevated in importance. The angler must decide if the decisions made back on land were sound ones or not. If rafted mullet are being hustled and harassed visibly and blowups come easily, no adjustments are needed. In a situation where the bites come quickly, any angler knows what it means.

But what happens when no fish indicating signs are seen and no bites are coaxed after an hour or more of fishing? Then the search most likely must begin again, and the searcher must decide whether to make a small or large-scale adjustment.

Perhaps the most difficult situation of all is the one in which some signs of fish may be perceived and a few bites are felt. This can become a confusing, teasing set of signals. Obviously, the presence of bait, perhaps a slick or two and a few blowups or telltale thumps mean that some fish are present, but how many? In cases like these, experience is most helpful. If the spot has been visited regularly on past trips, points of reference exist.

One might realize, for instance, that the fish have been biting best a little later every day, and might decide appropriately to wait. Conversely, one might see that far less bait is present than on previous occasions and decide to make a short move to a similar spot to see if the majority of the school has relocated.

Before such a decision is made, expert fish finders are likely to experiment with several things while on a spot where some fish have indicated their presence. They will probably dabble with lure choice, changing color, style, presentation technique and/or direction of cast. They'll make a mental assessment of the layout of the spot and attempt to determine whether the majority of fish have relocated to some sub-region within reach.

Sometimes, fish that were on top of a bar move to potholes on its edge or off the structure entirely. Other times, fish that have been holed up in the depths crowd onto a shallow shoreline in response to warming weather after a cold front. The most adept fish locators consistently predict fish movements and relocate fish, relying on their instincts about such movements, but also by making good judgments as to what lures and retrieves best match the conditions of the moment.

And that's the most important part of this equation in the end; finding specific fish and getting bites comes back around to versatility in lure choice and presentation. Anglers who hook and land the most fish (and the most big fish) are those who are best able to offer the fish what they are willing to try and eat.

First, they understand where to go in general. Then they know how to narrow their search. When they are out there on the water among others who have made similar basic decisions, they are able to sort out the details of the day better than the rest. They see what is there to be seen, processing each relevant sign, no matter how subtle or seemingly insignificant.

They are intensely focused on the water around them, looking for all keys to solve the fish-finding riddle. Calculating and methodical, they probe the water in proven ways with lures they know will work given the "feel" of the hour. Persistent when they need to be, they are also unafraid to leave a previously productive area when things change.

Most importantly, they are supremely capable of catching the fish within their reach. This is what eventually makes their judgments as to the presence of fish more accurate. They know in their hearts they will catch 'em if they find 'em. They also honor the power of one obvious and final truth etched permanently on the other side of the coin.

We are universally governed by this reality. With a wry smile on his face, the Phantom rightly states, "One fact remains inexorable; a lure cast into water where there is no fish will not produce a strike."