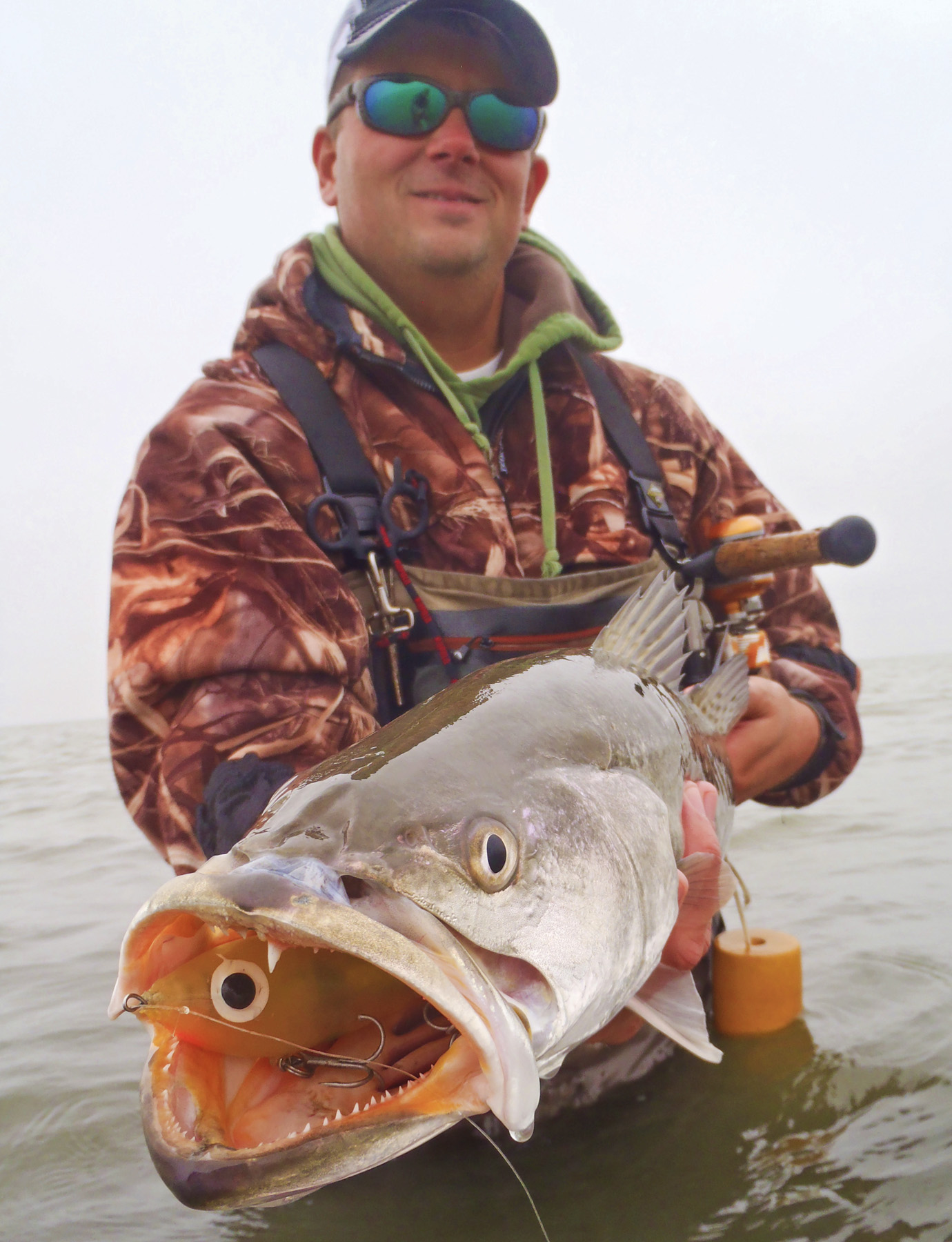 Jason King and Captain Kev started this cold day fishing with soft plastics, but when Jason proved the trout would aggressively strike sinking Fat Boys, both men put the worms back in the box.
The older I get, the more I believe in the prominence of one human personality trait above all others. People I know display this characteristic regularly, in a variety of ways. I describe this common mindset as "resistance to change." Recently, I heard a good explanation of why this thinking mode prevails across human cultures.

The assertion sounds something like this--because we are human, we recognize our own mortality and know we will die someday. So, while we live, while we are healthy, we don't want things to change. Change becomes a sentinel of our impending doom.

The concept rings with a melancholy tone, and generally seems pretty deep and dark. While I won't linger too long on the somber aspects of how our tendency to resist change causes all kinds of sociopolitical problems, I will describe the ways in which this "conservative" mindset potentially limits the productivity of coastal anglers, particularly those who fish exclusively with artificial lures.

When people go fishing, they don't leave their personalities at home. The same traits which define their beliefs, assumptions and actions in other parts of life affect decisions made on the water. Resistance to change impacts anglers' behaviors in several significant ways.

The mindset prevents people from exploring new areas, methods and lures, causing them to prefer sticking with "old familiar places and ways of doing things". Certainly, running around like a chicken with its head cut off and abandoning proven productive places, patterns and plugs makes no sense; at some point, stubbornly sticking with the same old same old lacks wisdom too.

Most novice coastal anglers rely far too much on a short list of spots, and return to those spots repeatedly, without regard for the conditions of the moment. Usually, this happens because anglers vividly recall some poignant outing in the past when results in the places met or exceeded their expectations. Essentially, these anglers fall prey to chasing a memory; they place too much faith in a spot, without factoring in other variables which might have played a much bigger role in generating the memorable day's productivity. Basically, they perceive the spot as some kind of "magic bullet."

Similarly, many people employ the same methods every time they fish, without thinking of alternative ways, considering pertinent variables like tide level, weather, time of year, time of day and water temperature. In its most extreme form, this mindset expresses itself through an unwillingness to wade, or conversely, in the dogged insistence on wading. It might also cause people to target the same kind of fish in the same way every time out. I know this from experience, since I'm an acknowledged "trout snob", one who targets trophy fish with artificial lures, almost always by wading.

Sometimes, fishing would be much easier and more productive if I chose to target other species and/or used alternative methods to do so. I've made a conscious decision to make things tougher on myself some of the time, because I'm motivated by a single-minded pursuit. For the average angler, who generally just wants to have some fun and catch some fish, insisting on targeting one species one way all the time probably hampers their enjoyment of the activity most of the time.

In addition to species targeted, an overly conservative mindset causes people to respond the same ways to environmental variables when fishing. For instance, most people tend to "hide from the wind in protected water". If high wind speeds muck-up open water areas and shorelines on the windward side of the bay, heading into quieter pockets in the lee of the land and looking for "green" water makes good sense. In moderately breezy and calmer conditions, though, embracing the breeze and fishing windblown areas often proves more productive.

Additionally, when coping with wind, some anglers always wade and cast downwind, though walking and casting crossways at various angles to the breeze would allow them to cover more water more thoroughly, effectively and productively. Similarly, they also move through the water at the same pace every time out, without consideration of factors which might dictate the relatively higher potential productivity of moving slower or faster.

When targeting actively feeding fish on flats with lots of equally productive terrain, moving steadily at a fairly brisk clip can work well. But when attempting to catch lethargic, finicky, inactive fish in areas with identifiable micro-spots which offer much greater potential than other parts of the area, standing and casting repeatedly to small-scale structural elements and features makes more sense.

Thoughtful and accurate analysis of the conditions coupled with careful observations can help one make sound predictions about the feeding mood of the fish, which affects the likelihood of them being either mobile or stationary. Likewise, observations and analysis of the conditions lead the best anglers to the right conclusions about what lure will likely work best at a given time. Expert lure chunkers know variables like water temperature and clarity, rising or falling barometer, tide movement, wind speeds and other factors make some lures more productive, while limiting or temporarily eliminating the effectiveness of others.

Some of these guys acknowledge their "tunnel vision" and its limiting effects, stating, "If I can't catch 'em my way, I don't want to catch 'em." I can respect such a statement, as compared to guys who try to convince me, "Catching them my way all the time is more challenging." To them. I respond by borrowing words famously uttered by Coach Lee Corso of College GameDay--"Not so fast, my friend!" Using one lure 95% of the time presents little challenge to the angler when compared with trying to master the arts of versatility and keeping the best lure for the moment on the end of the line as often as possible.

In other words, if the fish aren't blowing up on topwaters, proficient anglers switch over to some other type of lure or plug, ideally one the fish will actually bite. At some point, throwing any lure all the time verges on a form of insanity, a mindset which can be defined as "doing the same thing repeatedly and expecting the outcome to change."

This crazy need for stability infringes on people's ability to present lures in productive ways too. Most anglers use each lure in their arsenal the same way every time they pull it out of the box. If the fish don't bite regularly, they often descend into a state of consciousness where the mind shuts down, or becomes numb, and they begin fishing in what I call "auto pilot."

When fishing in auto pilot mode, anglers usually chunk the lure out and move it in the same way over and over and over again, without any variance in speed or intensity of movement. Their presentations become homogenous, repetitive and stale. Usually, they do impart some kind of rhythm into these generic presentations, because they rightly perceive the tendency of rhythmic movement patterns to attract the attention of fish.

Unfortunately, while rhythmic movements attract fish, often to the point of making them follow a lure, they do not work well to trigger strikes much of the time. The best presentations include rhythmic movements of the lure and deviations from those movements. In other words, they include the elements of variable speed and intensity--pauses and speed bursts. Generating such presentations becomes nearly impossible for anglers who resist change and allow themselves to just "go through the motions," without a focused mindset.

One way to avoid this phenomenon involves making a conscious decision to experiment with a given lure while trying it. Years ago, when fishing tournaments regularly, I used a cast counting method for this. When trying a new lure, I'd allow it say fifteen casts to produce a strike. I'd break the number down further into segments, and make five casts to the left, crossways to the wind, five straight downwind and five to the right. I'd make a conscious effort to vary some aspect of the presentation during each five-cast session. Executing such a plan causes the mind to stay focused on the details of the task, rather than descend into the abyss of auto pilot.

The ability to focus on the most important details of the moment and properly adjust location, strategy, lure choice and presentation to match the most influential variables affecting the fishing situation separates expert anglers from beginners and novices. In general, experts carry a select few lures on a given excursion, rather than throwing "everything in the box" at the fish, but they also recognize the need to identify the subtleties of presentation which best trigger bites, acknowledging the specific conditions.

Of course, once a presentation with a particular lure proves productive, experts will repeat it until it stops working! All top anglers recognize the value of the old adage "if it ain't broke, don't fix it!" Ironically, resistance to change becomes, at some point in the equation, a necessary and effective mindset.

So we face a dilemma every time out. On the one hand, we must embrace the way changing aspects of the fishing situation affect our efforts and adjust our strategies accordingly; on the other hand, we must stick with what works once we identify it. Until, of course, it stops working, then we must fight the tendency to resist change and begin systematically searching for something new all over again.