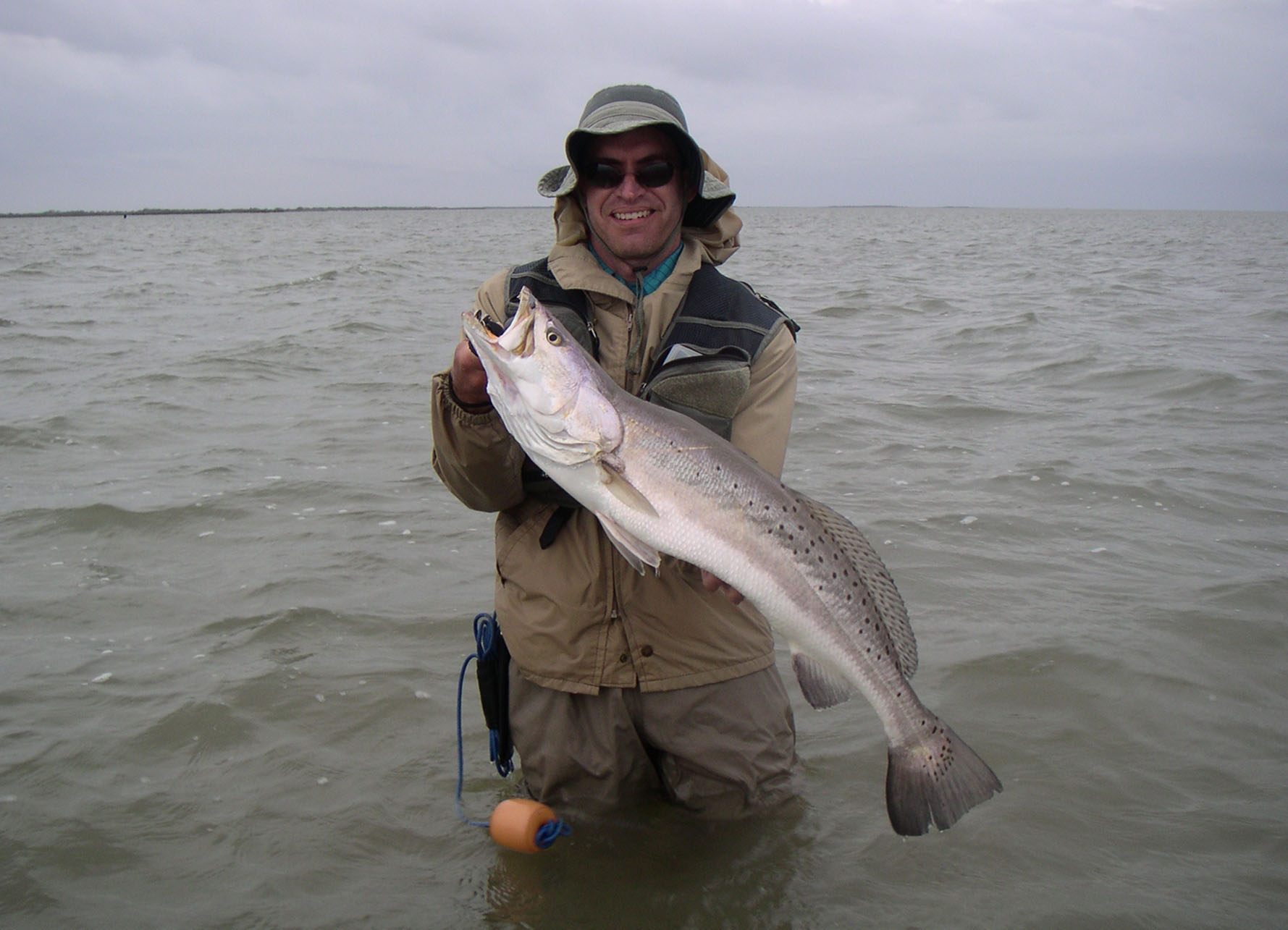 Here’s old friend Jay Wright with a healthy 31 incher. This picture might convince many that she weighed ten pounds, but the Boga doesn’t lie. She was “just” a nine!

Like many others, I share detailed fishing information within a group of friends. My network includes a small number of men, all of whom enjoy fishing the same way I do. A fishing network is only as good as its members; durable chains are built on relationships between people with similar skills, interests and levels of experience.

It's wise to really get to know the people with whom networking relationships are built. With how many others do they already share information? How willing are they to tell the whole truth and nothing but the truth? What is their level of fishing skill? What are their preferences and weaknesses as anglers? Also importantly, how much of a fudge factor figures into their reports?

Everyone knows that fishermen sometimes (or always) exaggerate the size and number of the fish they catch. That's why I don't even pay attention to weights that are stated or posted by people who don't use some type of scale to weigh their fish. I'd guess that more than ninety per cent of people overestimate the weights of the trout and redfish they catch. I might even inflate the heft of some of the ones I release without weighing on my Boga Grip.

But when I post a figure on my website, it's verified by the scale; no fudge factor comes into play. I deal with some others in my information network who hang all of their bigger fish from a Boga. When I take a report from them, I know that the weights and numbers of fish caught are accurate. With others, I have to adjust the data to account for their propensity to exaggerate.

If a guy tells me one day that he caught twenty five trout up to six and a half pounds then repeats the report a few days later and says he caught thirty or more up to seven pounds, I know he tends to exaggerate. When I take reports from such a fisherman, I always shave a little off the numbers in my mind before logging things into memory. Eventually, if I can verify that someone is too far from the truth in their reporting habits, I might drop them from my network entirely.

I know people who have what I might dub "ballooning memory". The more time that passes after the date of a catch, the bigger and more numerous the fish inevitably become. If three of us catch a hundred trout today, eighty of those over twenty inches, two dozen over twenty five inches, the largest at twenty seven inches and weighing in the low six pound range, one of the guys will someday probably claim that he caught fifty over six pounds himself! Predictably, he's never documented his results in a fishing log.

I've known other people who couldn't accept and report the truth about a catch even after it was displayed on a digital scale. While fishing a Troutmasters tournament nearly a decade ago, I watched one such person walk into a relatively hot bite during a calm and quiet afternoon. From a respectful distance across a sandy flat, I observed him as he caught five nice fish on his Super Spook. I know he caught them on a Spook because I heard him narrating the action into his cell phone.

Funny thing was, this guy was so dedicated to his network that he dialed up one of his buddies in the middle of the melee! He cradled the phone under his cheek and chattered away while casting and even fighting fish. At one point, I heard him clearly state, "Man, this one's only about twenty two inches; I don't need it." Then he proceeded to fling the fat trout over his shoulder like Emeril spreading salt on his kitchen floor.

I thought that was odd, but the severity of his mistake wasn't fully evident until the next day at the weigh in. While we were waiting in line, I noticed that he had only four fish in his bag, though we were allowed to bring in five. "Nice sack," I said. "Too bad you didn't get your fifth." The man shrugged but never admitted that he'd so casually flipped his fifth weigher away, apparently unaware that I'd witnessed the event.

"Yeah, I got one about eight pounds though," he said instead. I studied his fish and skeptically cocked my head to the side.

I didn't argue with him, but I watched with interest later as his fish hit the scale. She weighed in at 6.93 pounds. A few minutes later, I sent my partner over to ask him about the fish.

"She wasn't as big as I thought," I heard him admit. "Only went seven and a half pounds."

The whole thing makes me snicker to this day. First, the man had been so anxious to give his fishing report to his friends that he jeopardized his finish in the event by calling them while he was in the heat of competition. I'm convinced he didn't string the twenty two incher because doing so would have required him to stop yakking on the phone. Furthermore, when confronted with the fact of the overestimation of his big fish, he couldn't admit the scale of his mistake, even after we'd seen the numbers in liquid crystal display.

Some people are overly optimistic and enthusiastic about the results of their outings; they allow a positive attitude to inflate their description of both the number and size of what they catch. When judging a report, it pays to know where the contributor falls on the scale of optimism. Some will go to a spot and catch a few fish and say it was "on fire over there", while another will have an notably more negative perception of the same events. Especially when a "monster" is said to have been hooked and lost, it helps to maintain a decent level of skepticism, especially when talking to someone known to be easily excited by such things.

It's hard enough to guess a fish's weight at arm's length, let alone when she's out there at the end of a cast. The inherent difficulty of making a realistic estimation of a big trout's weight drives those of us who care to use a Boga Grip or other scale. I believe that CCA should issue some kind of scale to all who enter the S.T.A.R. tournament to prevent the fudge factor from causing non-qualifying fish to be killed and brought to their scales. Hundreds, if not thousands, of six to eight pound trout have been needlessly harvested by people who wrongly thought they had a qualifying fish. For the record, a large majority of twenty eight inch trout I've weighed and seen weighed did not break the eight pound mark.

I admit I killed one that didn't a decade ago, thinking I had a S.T.A.R. quality fish. In my amateur days, I carried no scale when wading, and I overestimated her in the middle of a moonless June night while working a bleary-eyed vigil behind San Luis Pass. Through my crusty, half-open eyelids, in the dim orb of a head lamp, she looked like she'd break the eight pound barrier. Sadly, she didn't even top seven when they slid her onto the slick steel cover of the scale at the bait camp the next day.

I hadn't caught enough big trout back then to really have a good eye for how much they weigh. Even now, after catching hundreds more, I still am off sometimes with my estimates. Those who have never carried a scale are bound to be less accurate in their assessments than people like me who have verified the size of good numbers of big fish.

It's one reason I refuse to look at fishing reports on the internet anymore. Some of what is posted there is grossly exaggerated, often not intentionally, I believe, but just because people don't know how much their fish really weigh. A report board on a fishing site is not a legitimate network, to say the least. Those who seek straight information in such places might as well open up all those emails saying they've won a foreign lottery and type in their account numbers so the winnings can be deposited.

I've learned many times over that information floating around in the general fishing community is usually dated, contorted or downright wrong. I recall another tournament in which I observed exactly where the day one leader was fishing all day. After we saw his weight posted, I had three other anglers approach me unsolicited and say they knew where he'd been that day.

One placed him in the west end of East Matagorda Bay, where I'd verified his presence. Another swore he'd seen him in the other end of that bay, and the third reported that he knew he was in the east end of West Matagorda Bay. All thought they spoke the truth, I'm convinced, when they whispered to let me in on their "secret". From that and other events, I learned not to pay attention to the murmurs bobbing around in the crowd at times like that. Fishing misinformation spreads faster than a wildfire out west when it's fueled by a Santa Anna wind.

Possessing fishing misinformation is potentially harmful to someone who is trying to consistently catch fish. Running around in the wakes of random reports is frivolous at best, downright foolish most of the time. For that reason, I only share information with certain kinds of people. It's wise to exclude some personality types from the network.

It's probably not smart to blab to those who aren't versatile enough to catch fish when conditions don't favor their favorite lure and/or technique. If they have tunnel vision on topwaters, or never get out of the boat and take off the worm, it's hard to depend on their perception of the abundance of fish in an area.

The astute will likely remain vague with those who don't fish regularly enough to provide information throughout the year. Weekenders who wanted to call me on Friday afternoons and get the scoop were weeded out of my network long ago. They simply didn't spend enough time on the water to give back information to balance what they received. Savvy participants in an information sharing scheme seek partners who fish as often as they do.

It's important to recognize and avoid those who wish to listen and stay in the shadows at their end of a one way street. Good network members are willing to share enough of what they know to build a legitimate two way street. On the other hand, no one can abide the guy who's so talkative that information runs straight from his lips down the cyber-highway to everyone with an "i Phone" or laptop.

Last but not least, be wary when sharing hard-won information with those who can't keep the fudge factor to a minimum. It's okay when a report gives off a whiff of a brownie or two, but watch out when it starts to smell like a whole steaming tray!