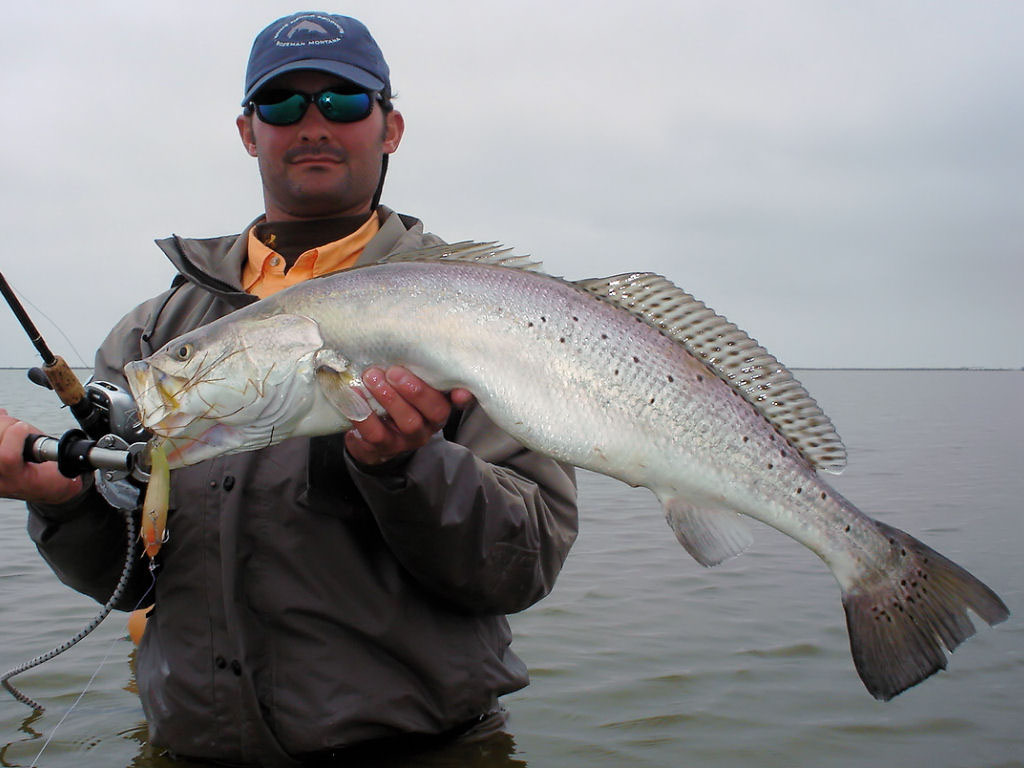 John Bailey and friends found a school of jumbo trout like this one crowded into a relatively short stretch of a long dead-end gut during a cold snap late in the autumn of 2006.
I have watched and learned from fishing shows on television for many years. Recently, two programs on bass fishing led me to some important conclusions about “pattern fishing”. On one, a famous B.A.S.S. pro defined pattern fishing by saying that a pattern exists when all of the bass in an area behave the same way at a given time.

In other words, he said, if a bass is caught on an isolated stump near the drop off of a creek channel, it would indicate that all the bass in the area are relating to stumps in the same way. The esteemed expert (who has won many tournaments and earned over a million dollars while fishing professionally) went on to draw a distinction between a “single fish” pattern and a “school” pattern. A stump, rock or small bush, he said, would be likely to hold only a single or few fish, but other types of cover like tree tops and grass beds and structures like channel edges might hold entire schools of fish.

The key to successfully fishing patterns, the “old fresh” advised, is to learn to differentiate between single fish and school patterns, because single fish patterns necessitate searching far and wide for scattered fishholding spots, while school patterns allow anglers to thoroughly cover an area and catch numbers of fish without moving around much.

What he said makes good sense and is undeniably useful advice to anglers seeking many types of fish, not just “old bucket mouth." All anglers should attempt to determine the significance of the variables whenever a fish is caught, in attempt to glean some kind of pattern that can be repeated.

But the famous bass guru lost me when he went on to give this advice to the viewers: “Whenever you catch a bass, stop, take a deep breath and really try to determine whether you have discovered a single fish pattern or a school pattern, because your subsequent efforts will depend on which it is.”

I fail to see how breathing deeply will help someone make such a judgment! In my experience, thinking harder and longer about something is not useful unless the variables being considered are completely understood. What he did is analogous to giving someone a complex home theater system without a set of instructions for assembly and use.

Fishing experts give advice and clarify concepts to a point, but when it comes to the most critical components in the equation, they often leave the listener/viewer/reader hanging. For example, they might simply suggest making a lure look like a wounded fish, rather than specify the method used to produce such a presentation.

Novice anglers armed with such advice aren’t much better off than a five year old attempting to complete an older sibling‘s calculus homework. The bass pro’s comments would have been more useful if he’d better clarified how to recognize the two types of patterns. Doing so is not always easy, because in a way, the distinction between them is arbitrary.

Single fish and school patterns are essentially the same if numerous single fish spots can be located within a relatively small area. If there are enough fish-holding stumps clustered close together on a given flat, that flat can be said to be the site of a school pattern.

The best way to prove that a school pattern has been found is to cast back to the spot where one fish is caught and catch others. If several subsequent casts don’t produce a strike, locating other similar spots in the area and casting to them can indicate that a single fish pattern is repeating itself. Then the angler must determine whether the immediate area has enough of these types of sites to justify staying or whether a move to another area with more of the same kinds of sites is justified.

I believe his concepts apply well to trout fishing. If a trout is located in a particular place, it’s important to attempt to determine several things about that place. Depth of the location should be considered, along with the presence of structural elements and types of cover. If the fish was on the windward side of a sand bar in a knee-deep pothole, how many other potholes like it are to be found in the immediate area? If enough are present, a school pattern is more likely to unfold.

Another factor to be considered is the likelihood that fish are moving and actually searching for food. This can be done by “reading” signs like the activity level of baitfish, the presence of current, water temperature and ease of getting bites. If lots of movement and activity are observed and strikes are easy to solicit, it probably means that fish are roaming in search of food.

In an active bite, fish are likely to show up in certain places when ready to eat, so staying and casting to a site like a current rip in a reef, the deep edge of a rock or a pothole at the end of a dead-end gut will be more likely to transform a single fish pattern into a school one. If things are more negative, a move to another area with similar terrain might be wiser, given that fish may be stationary, and after one or two are pulled from a site, others aren't likely to move in and take their place.

Sometimes, the pattern is the bait fish themselves. By casting at tightly bunched, surface-hugging schools or obviously fleeing singles, anglers can often locate prowling predators hot on their tails.

The reality of pattern fishing is not nearly as simple as the old bass pro would like us to believe. The other fishing show I’d seen the day prior to watching him define patterns made clear what I mean. It documented a Bassmasters tournament held on Lake Amistad earlier this spring.

Big bass were biting, the stringer weights were nearly unbelievable, and the competition was close. Several anglers maintained a five pound average for twenty fish over the four days! That was impressive, but what relates to this discussion was the way the anglers did their catching.

Every one of them was fishing a pattern. Some were fishing single fish patterns, while others were fishing school patterns. The most important factor, though, was the wide diversity of the patterns themselves.

One proven veteran was fishing vast, shallow flats covered with weeds and bushes, making numerous short casts with a crank bait, ticking it off the vegetation and catching enough scattered fish to give him a high finish. Three of the top finishers were working another pattern, swimming large soft-plastics through submerged tree tops in about twelve feet of water until they found their “magic tree”, which often held groups of eight to ten suspended big fish.

The winner of the tournament, a 23 year old rookie fishing his first Elite Series event, was fishing in 25 to 30 feet of water, slowly hopping a heavy jig along a narrow secondary ledge next to 60 foot depths. He was catching his fish regularly, but not quickly. Often, he’d wait thirty minutes or more between bites, but he fished one short stretch of water all four days and won the event. He seemed to be catching cruising fish as they appeared on the ledge looking to eat.

I doubt most of the competitors on Amistad that week were concerned with the actions of their peers, at least not while the fishing was underway. Each probably was convinced he’d found the best way to win the event, especially one famously brash, well-known participant, who yelled into the camera, “That‘s the tournament right there. I just caught the winning fish. I‘m a bad dude!” He thought he’d solved the pattern riddle better than all the others he was up against. Later, he would be forced to admit that there were many ways to catch big bass on that lake on those days.

The event proved it’s all too easy to get tunnel vision on one pattern and think it’s the only way to catch a fish. The veteran who defined pattern fishing was actually wrong in one sense. He implied that once a pattern is discovered, it’s the only one available in an “area.” Often, that just isn’t so. All of the fish in a given area will not act the same way at a given time, at least in some situations. If that were true, there is no way that such radically different patterns could produce similar catches concurrently in one lake.