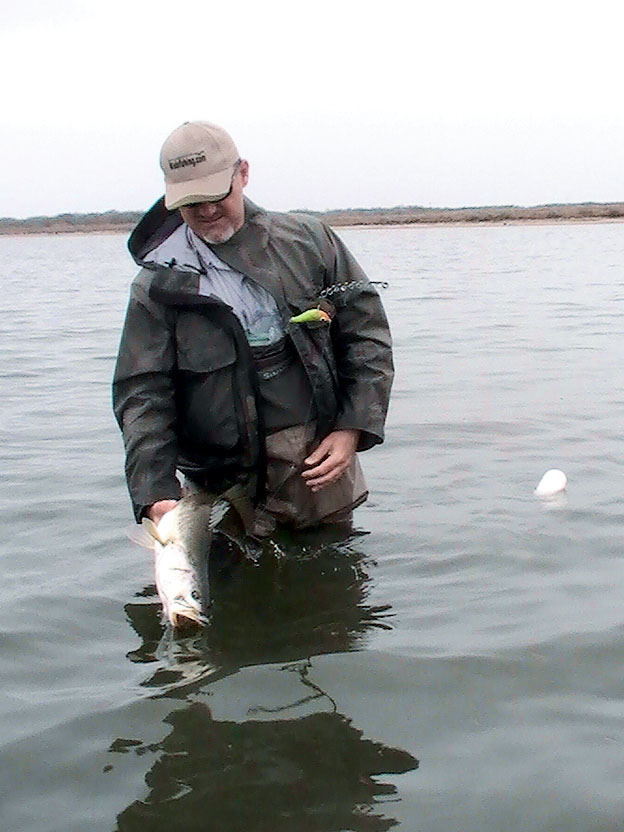 The author seems content upon the moment of releasing this seven pound trout.

Author's Note: The words that follow are expressed in the voice of The Phantom, a character who speaks to me to this day. Here, he gives his perspective on the qualities commonly shared by successful trophy trout fishermen.

I've logged many miles hunting trophy trout, and made a meandering trail of footprints on the bottom of the bays all the way from the Lower Lagoon to the Louisiana shore. During the last half century, I've been privileged to meet and know many fine fishermen who share my passion for this sport. Some of them are prominent, recognized and revered by the general fishing public; others are reclusive, virtually unknown. When I analyze and compare these old salts and young pros, I realize that the best pluggers possess several common characteristics. I'll call this set of shared traits "the whole nine yards."

All of the things on this list are important, but one thing stands out above the others. The most important thing all accomplished trophy trout anglers have in common is a burning desire to catch big fish. They'll ignore other interests so they can spend more time on the water. They'll travel long distances, fish straight through the night, work around nasty weather, whatever it takes to stay in the hunt. People without this hot desire simply won't be able to keep up with those who have it, won't ever develop the full set of skills necessary to catch big fish consistently.

The serious pursuit of wallhanger trout dictates a need to own a boat. All of the top trophy hunters have a boat, because it's just not possible to get to all the good fishing holes without one. In the old days, the boats were slow and simple, mostly flat bottomed aluminum skiffs with modest, carbureted outboards. Today's boats are bigger, faster, more complex and fuel efficient, and they run shallower too.

Modern experts use specialized equipment like jackplates, trolling motors and the Power Pole to make the fishing easier and more productive. Of all the recently introduced gadgets, GPS technology is probably the most useful and necessary tool. Old-school captains navigated with their wits and their eyes in creative triangulation, but most wouldn't dream of doing it that way today, not with the magic of the satellites shining on the path.

GPS systems make navigating safer and easier. They also allow for returning to precise spots time and again, and they provide a basic outline of the features of the bays, but they really don't help much when it comes right down to actually catching fish. Crafty veterans know that their rods and reels are the most important fish-catching tools they own.

All of them use lightweight, super sensitive gear with the flex and feel to match their fishing styles. Today, that means they hold a graphite rod around seven feet long, give or take a few inches, and a bantam-weight reel easily cradled in the palm of the hand. None of these artisans would dream of using the thick, awkward fiberglass poles and heavy, high-capacity reels we used decades ago. Those glass rods and round reels were durable, but they'd wear a guy out much quicker than the feather-light products we have today.

Forty or fifty years ago, there weren't many lures available for saltwater fishing; most of the guys threw spoons, shrimp tails, maybe a hand-carved topwater or two. Most of them still have some antique stuff lying around somewhere, and they carry a few cherished, crusty old plugs in their wading box. These tackle technicians are generally stubborn; they operate from the "if it ain't broke, don't fix it" philosophy when it comes to what they are willing to throw.

Some plugs, like the Jumping Minnow, 51 and 52 series MirrOlures, the Shifty Shiner and others, never go out of style with these guys. But nowadays, the number and variety of fancy lures made for catching trout seems to outnumber the trout swimming around in the bays! Even the staunchest defenders of the old tools eventually pick up and use proven newer ones like the Corky, the Catch 5, the SheDog and the XRap. These collectors won't toss out trusted lures every time something new and shiny hits the shelves, but they are willing to try things they think will work, especially when they believe a new lure fills a specific niche better than all the others.

They rely on their instincts that way; they also rely on their knowledge of the fish and of the bays and waterways. To a man, their ability to recall details from previous fishing trips, some of which happened many years ago, is incredible. Similarly, they possess and nurture an innate ability to learn and recall details about the features of the bay systems. In the past, they made and studied paper maps; today, they scrutinize clear, precise, regularly updated images of the bays shot by cameras in the sky. All of this critical homework allows them to find sweet spots wherever they go; their fish finding skills are based on extensive knowledge of the fish and the bodies of water in which they live.

Also, they demonstrate great judgment about when to stay on a spot and grind and when to move to a new area. Top producers consistently make the correct decision to stay or move because they have an uncanny ability to use all their senses to detect the presence of fish, to remember accurately the past history of the spots and to understand how the weather and tides affect the spots. They are blessed with ample instinct which expresses itself as a gut feeling; that feeling tells them when fish are in a place, even if they aren't catching anything.

Related to the ability to predict the presence or absence of fish is their versatility in the use of lures and presentation styles. Great trophy trout anglers work a fishing rod like a wizard wields his wand. Each one relies on a favored lure and style, but they show ample skills with many other lures and techniques too. They seem to gravitate toward the proper lure and presentation for the moment, as if pulled by preternatural powers. Often, their broad-based skills allow them to catch fish when others can't. Over time, the ability to consistently make fish bite provides them with better judgment about whether fish are in fact present in a place or not.

And last, they are persistent, almost freakishly so. Once they decide they've found big fish, they are virtually tireless at trying to catch them. This doesn't mean they become anxious, or rushed, just that they will exhaust every possible trick they know in order to get a bite. More like sled dogs than race horses, they understand that success in trophy fishing often involves thorough, tedious and determined effort over a long haul, not a mad dash to a visible finish line. Their persistence brings the whole nine yards back around in a full circle, because it's made possible by the first thing on the list, the genuine desire to catch big fish.