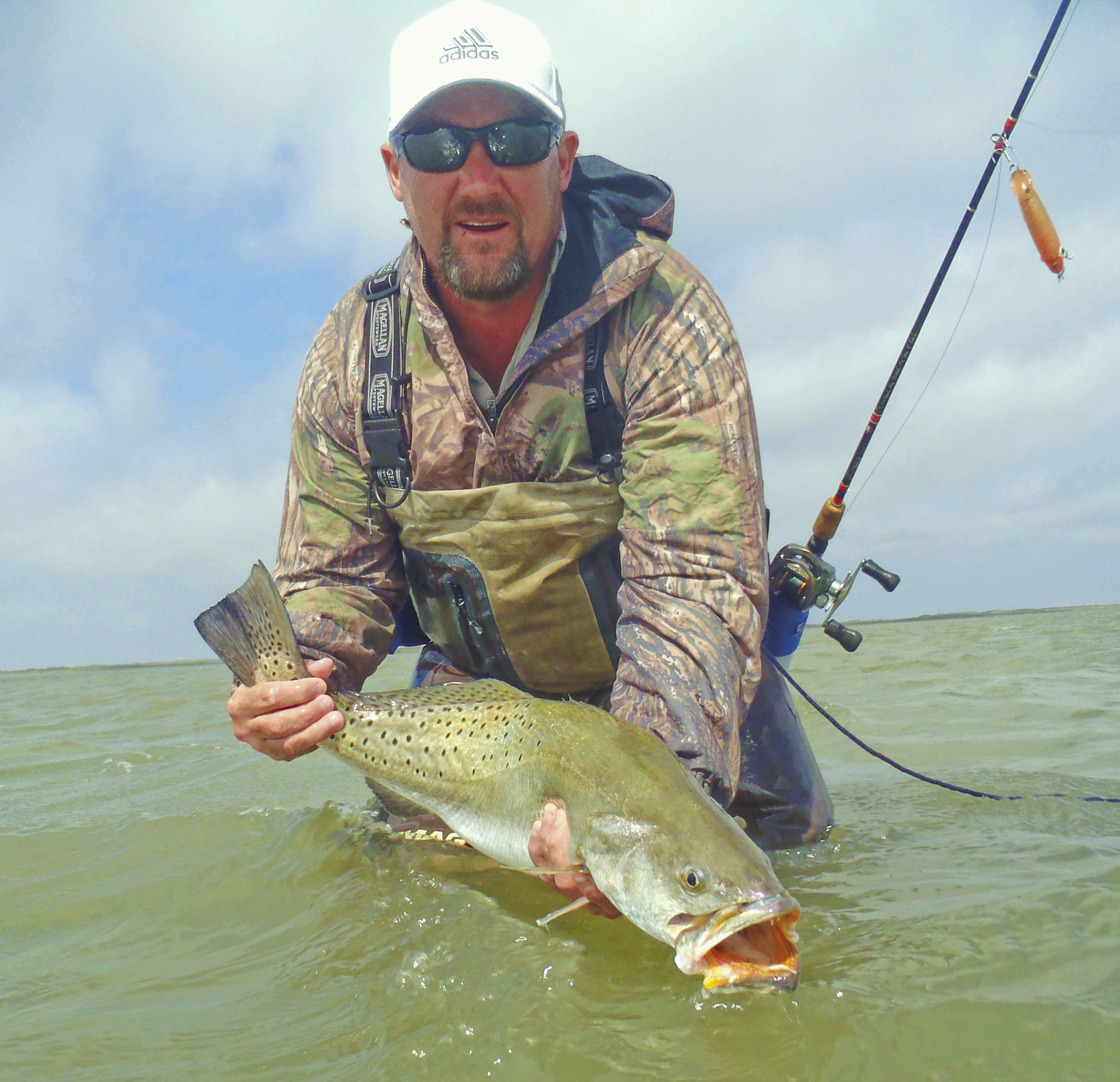 Kenny Doughty caught this 7-1/4 pound speck on top of a shallow, grass-studded sand bar covered with jumping mullet.
"Find the bait, find the fish"--a familiar and respected idea. No experienced angler in his right mind would doubt the basic truth behind this widely accepted premise, but the simple and direct connection implied in the statement is more meaningful at some times than others.

When fishing inshore waters for speckled trout and redfish, the location of bait is most important during the winter months, when the number and abundance of bait species are at their lowest. After strong cold fronts drive water temperatures and tide levels down in December, many life forms flee from the bays into the Gulf of Mexico. Consequently, in January and February, mullet are the primary (perhaps only) forage available to trout and redfish in many parts of the estuaries.

During these frequently frigid months, finding even small concentrations of mullet can lead anglers to schools of trout and redfish, but low water temperatures often make locating mullet difficult. Coldblooded creatures, less active in cold water, don't move around and jump much, making them harder to spot, especially in windy conditions. Birds flying over the water can help reveal inactive schools of bait, which often spook and scatter in response to the passing shadows of the winged predators, especially under bright skies.

Calm conditions make the search for bait easier, allowing one to see wakes, swirls and other subtle signs. Whatever the wind speed, patience pays when searching for relatively scarce pods of mullet in winter. Sometimes locating them means staying in one place for several minutes and maintaining a sharp vigil, since they may pack tightly together in small areas, like the shallows immediately adjacent to grass mats on the shoreline.

Conversely, during the warm period, especially from late summer through most of autumn, bait species can be found all over the bays. Finding bait from August through October isn't nearly as meaningful as in January. During warm months, it sometimes feels like the trout and redfish are finicky because they have too much to eat. Logic leads to the question, "Why would they strike a plastic plug when they have something delicious and real right in front of their noses all the time?"

Readily available food sources probably make trout and redfish less motivated to take artificial lures. Easy access to prey might also create a lazy feeding mood in the predators, making them unwilling to work for their meals, since "snacks" swim regularly within reach. Undoubtedly, when bait fish are distributed widely and abundantly throughout the bays, experienced anglers use other signs like slicks and working birds to find trout and redfish.

Certainly, all bait signs are not created equal. Savvy anglers don't rely on simply locating bait; they delve deeper into the situation when trying to determine whether the presence of the bait indicates predators nearby. Mostly, this means interpreting the movement patterns and activity level of the bait species.

A mullet leaping out of the water is a promising sign, but some jumpers are more significant than others. A lazy, high, "lobbing" jump might indicate at least a slight level of fear in the mullet. Perhaps it saw a trout or redfish in its path, so it jumped to the side to avoid close contact. That's a good thing for an angler to note.

An even better indicator of predators is a fast-jumping mullet barely exiting the water vertically while making a long horizontal movement, in attempt to escape an attacking predator. More than promising, such activity is a dead giveaway to the precise location of an actively feeding fish.

Other signs which signal an ongoing feed include numerous mullet and other species jumping repeatedly in a small area, "dancing" on their tails and/or circling around frantically. Tightly packed schools of prey species moving quickly on the surface show their fear of impending attacks from predators, especially if they suddenly rise and appear. While searching for trout and redfish, wise anglers look for any and all signs that bait fish are not only present, but also fearful, especially in warm waters, when bait is generally abundant.

If any different species of bait are present in the bays, locating the "right kind" of bait might become critical. Trout and redfish can become selective when presented opportunities to dine on temporarily available, seasonal delicacies like glass minnows, shad, shrimp or marine worms. The importance of rafted mullet is reduced in such scenarios, when schools of predators follow and feed on shoals of other species.

The size of the forage is also more likely to matter when bait species are varied and abundant. Trout and redfish voraciously feeding on tiny minnows or shad can be difficult to trick on lures which poorly imitate those species. If densely packed shoals of dainty forage species are observed taking regular attacks from below, meaning they are seen "spraying" into the air, small lures which closely mimic those species might be the only ones capable of enticing strikes from the attackers. Sometimes large prey species create a similarly confounding situation.

I've heard many novice anglers make a complaint which sounds something like this: "We found millions of mullet over there, but they were all horse mullet, so we didn't fish it." I generally don't think of schools of large mullet as a bad thing and will usually fish hard around them if I find them in great numbers, especially if their activity level indicates the presence of predators. The trout I try to catch can and will eat the largest mullet, and even if the predators aren't actively feeding on them, the mullet will still indicate their specific locations when they jump or behave erratically.

In the best case scenarios, the presence of bait not only stacks the odds that predators are in the general area, it also pinpoints their exact locations. Sometimes, a trout or redfish can actually be seen attacking its prey, either because its head or entire body comes out of the water during the attack, or because it's glimpsed as a silver flash beneath the surface. Other times, the attack might be perceived indirectly through the manner in which the bait species jumps and flees.

Undoubtedly, if a glass minnow completes a triple somersault where a flash and swirl are seen, then a mud stir erupts in the same space, smart anglers will get their lure to the site as soon as humanly possible. I can remember days on which such scenarios developed consistently, and I stopped casting randomly, waiting instead to see visual evidence of a feeding fish, so I could throw to the spot immediately.

In my estimation, focusing on exactly what's happening in the water within reach and casting to all suspicious activity will result in more fish caught. Many anglers seem content to cast randomly, even when subtle and/or obvious signs of fish are present around them. They apparently do so because of laziness, ignorance of the importance of the signs, or an inability to detect them. Inattentive anglers who ignore or fail to read the available information offered by bait fish will catch fewer predators.

Intelligent anglers scan the water constantly and attempt to make sense of what they see, trying to find a reason to make every cast count, ideally by throwing to a spot where they strongly believe a fish is present. Finding bait doesn't always mean finding fish, but fishing purposefully around plenty of nervous bait certainly enhances consistency.