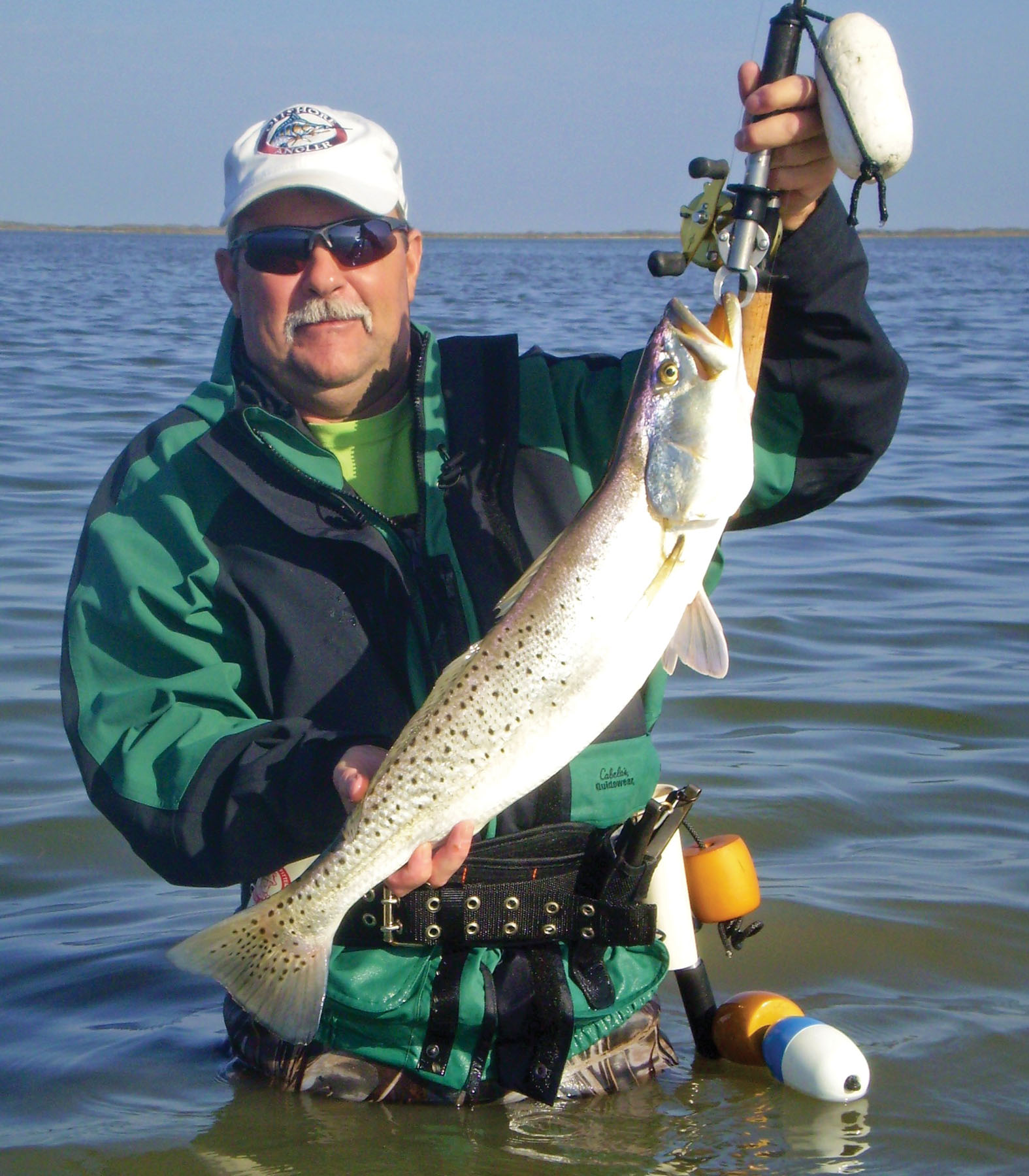 From time to time, a fishing guide finds it necessary to fish alone. If charters are scattered out with days between them, or if they aren't producing as planned, wise guides head out on fish-finding missions. Once, I embarked on just such an outing in the middle of December, hoping to locate a school of big trout to which I might repeatedly return throughout the coming winter.

A couple of hours into the morning, after a rather uneventful first wade, I noticed an ominous cloud barreling toward me over the northern horizon. The weather sources hadn't predicted a frontal passage, but years of experience have taught me they're wrong about as often as they're right. The fast-approaching, violet wall of vapors urged me to find safe haven.

I'd parked on the north shoreline of Baffin, close to a cluster of floating cabins which line the edge of the shallow flats in the north Badlands, potentially offering refuge to boaters caught out in a storm. I briskly made my way to the stern of the Haynie, climbed the ladder and raised the Power Pole, before idling over to the closest dwelling.

I've ridden out many rainy hours on the porches of these cabins, but had not previously pulled up to this particular one. As I'd predicted, the chilly cloud raced quickly over the water, shifting a gentle southeast breeze into a radically different gear--a stiff, gusty one with a northwesterly aspect. Accompanying the fresh gale, frigid, fat raindrops pelted the bay like bullets. The wind whistling against the walls of the cabin and the rain rattling on its roof created a soporific cacophony.

Soon, I dozed off to sleep, sprawled out on the damp, plywood patio floor of the rocking house, my back against the wall beside its front door. Though I don't remember rising and walking to find one of the front windows open, nor do I recall climbing through the aperture, the next thing I knew, I stood in the tiny kitchen inside the front of the place.

As I waited for my eyes to adjust to the dim, interior light, I smelled cigar smoke and saw blue-gray strands hanging in the air like webs; they seemed to be coming through a door which led to the great room at the rear of the structure. I started toward the door, intending to announce my embarrassment at having disturbed the owners of the cabin, but before I could do so, I heard the unmistakable sound of shuffling cards, then the drone of a familiar voice.

"Hey, boys, look here. It's the writer-guide, the one from the magazine," the voice said. I saw the speaker, sitting on the other side of a small, round table, receiving cards from a second man, who sat on the near side, with his back turned to me.

A floppy hat pulled low over his eyes obscured the face of the man who'd spoken, but I recognized the profile protruding beneath the brim. The chiseled chin recalled a Clint Eastwood character from some old western; he was surely The Phantom. The sleeves of his pale green fishing shirt, faded from so many hours in the sun, extended well past his wrists, hiding age spots and cancer lesions I knew to be covering the backs of his hands.

Apparently, he and the other man were playing Gin. On the table between them, I noticed a scorepad and pencil, a bottle of sipping whiskey, two sweating glasses filled with iced, amber bourbon, and an ash tray, in which a pair of half-smoked stogies spawned twin wisps of smoke.

Both men chuckled at The Phantom's announcement of his awareness of my presence, though neither turned to look or otherwise acknowledged me. Then I identified the second player. He was a famous fishing guide who'd tragically perished in a horrific crash while towing his boat home from a charter one day. I'd remembered him fondly in a piece I titled Just Like Heaven.

During decades of guiding and thousands of days on the water, he'd earned a reputation as a master guide, combining supreme fish-catching skill with an even greater ability to keep his clients happy. He was able to maintain productive relationships with many customers, without sacrificing his own priorities and preferences.

Contemplating the absurdity of the situation, wondering how I could be watching a card game between two deceased men, I slapped myself in the face, purposely loud enough for them to hear, hoping the sound would either rouse me from my sleep and end the dream, or cause the two to look up at me.

Neither thing happened, rather The Phantom spoke again. "Y'all think this guy can really fish?" he asked. "Or do his powers with the pen serve to make him seem like something he's not?"

While I paused to consider why he'd said "y'all" when making the query, the grizzled guru continued, "I'll say this. He needs to work on his patience. Catching monsters on a consistent basis is all about steadiness and perseverance. He seems to get caught up in technique, in the nuances and minutia. But what he really needs to do is slow down and focus his fishing intensity in exactly the right places."

I saw the head of the second player nod up and down to affirm his agreement with The Phantom's assessment. To my shock and amazement, I then understood why the old salt had used the words "guys" and "y'all", when I perceived a third figure in the room.

He lay supine on a bunk in the back corner of the cabin, cloaked in shadows. Tattered cotton pants covered his legs, but his bare feet extended off the mattress. Since he wore no shirt, I could see the hoary locks of his long beard mingling in confusion with wiry hairs on his chest.

His face, like those of the other two, was obscured by the beard and the shadows, and when he spoke, I did not see his lips move at all. But I clearly heard him say, "What he really needs to do is work on his capacity for grace, on the ability to see exactly what's in front of him. After countless hours spent looking out this window, I learned I could catch a big trout on a fly tied to one end of a piece of twine, with the other cinched around my big toe. If (he paused and raised one hand ever so slightly for emphasis) I could identify the perfect time to dangle my foot in the water. Catching fish is all about recognizing how to properly seize upon the opportunity of the moment."

His gravelly voice identified him to me. The Hermit had also been a guide in his prime, before moving out and spending his final years living alone in a cabin much like this one. He seemed sculpted from stone, like a prone statue, never looking up; he softly stated the words, as if talking to himself. And he never spoke again.

I thought about walking closer to the table and addressing the players, but I didn't want to come across like Flounder in the movie Animal House, so I stood in place, trying to decide if I were going crazy or dreaming, whether to stay or go.

Then the second player pitched in his two cents. "You guys are right about what you say. But the writer guy mostly needs to know a guide's life is more about people than fish. He needs to understand a satisfied customer who catches no fish is better for business than an unsatisfied one who catches plenty. Once he truly heeds this creed, his days will become easier and more fulfilling."

The other two snickered, The Hermit's chest rising almost imperceptibly, The Phantom's thin lips cracking to release a billowing cloud of silver smoke. Suddenly, it all seemed like too much for me. Surely, I remember thinking, this isn't real!

I climbed back out the front window and jumped onto the porch. After I turned and closed the window, I tried to determine if I could still see the three men in the back room. I could not, though it might not mean much, given the faint light in the cabin and the grime on the glass.

Mainly, I just wanted to get out of there, to go back to fishing. The storm had passed; the harsh wind and driving rain replaced by a softer breeze and light drizzle. These seem like the perfect conditions for catching some big fish, I thought.

Without hurrying, accompanied by a strong sense of inner calm, I untied the Trout Tracker from the floater and climbed onto the leaning post at her helm. Yep, I speculated, this afternoon will be good. I'll camp out by those rocks over there and wait out a big bite. Then I made a note to myself to remember to bring a spare Laguna Rod along for my customer the next day. He'll really love the difference it makes in his presentations, I mused.

Easing away from an eerie encounter with three players during a sudden, surprising squall, I spooked a blue heron off the back porch of the cabin. The long neck of the predator let out a loud, guttural, primitive squawk, fully comprehensible only within its lanky flock. I interpreted the sound as evidence of its displeasure over having been roused from its resting place. Watching the patient bird glide away, low over the water, wings stretched wide, my heart raced for a moment. Shuddering, I pushed the throttle forward, planed off, and headed back to work.