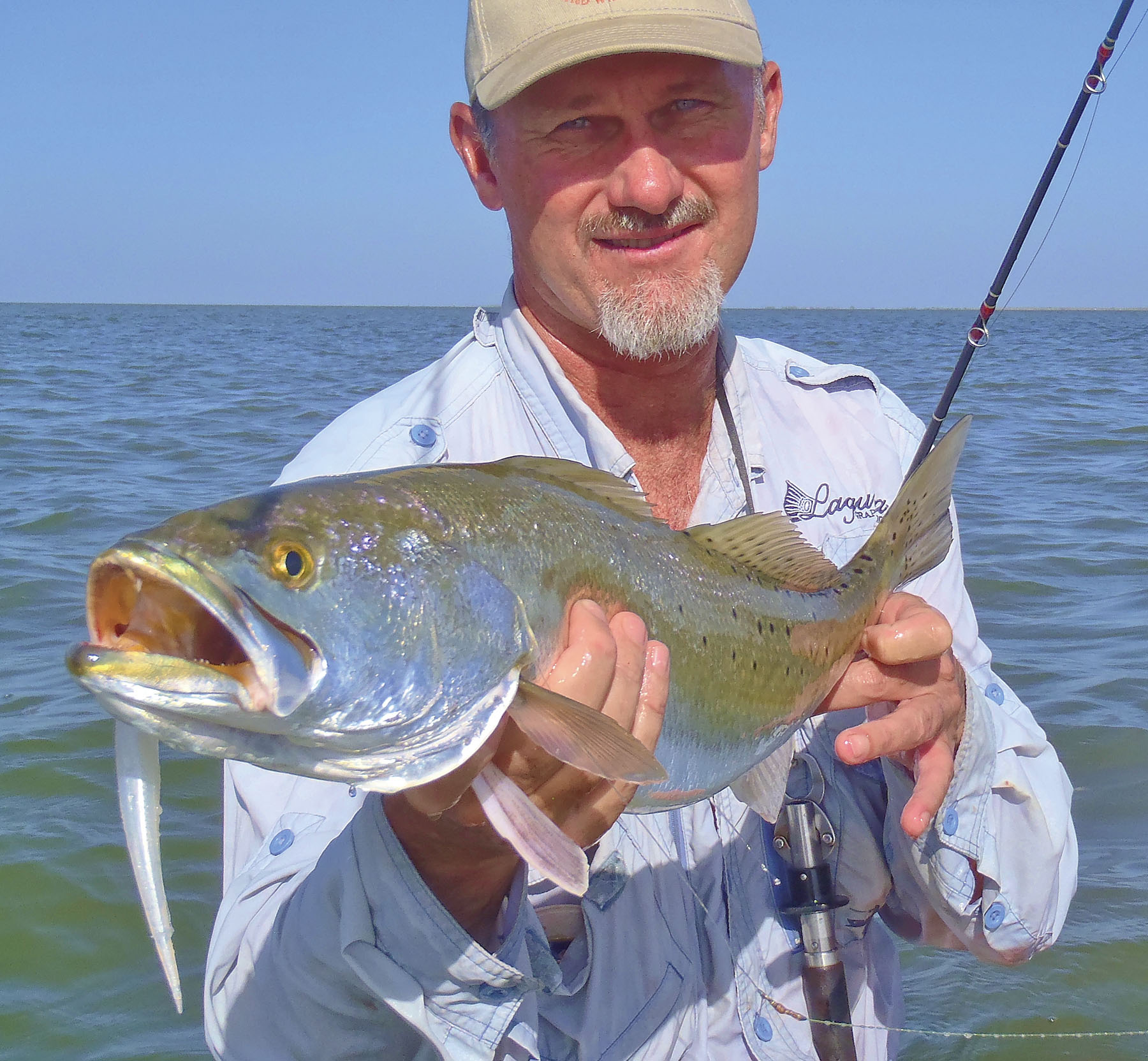 I've been fishing saltwater regularly for over twenty years now. In such a long span of time, strange things are bound to happen. Because these events are extraordinary and rare, it is difficult to make sense of them, but some conclusions do come to mind when I recap a few of the weirdest oddball incidents I've witnessed.

Among the most mind-boggling things I've personally seen on the water happened in the early 1990s, while I was fishing in Offatt's Bayou with my childhood friend Guy Arrington. Back in those days, we were novice anglers who normally fished with live shrimp. The winter day on which the incident occurred was somewhat raw and damp; dark skies kept both the water and air temperatures below normal.

Our favorite way to fish back then was to anchor close to some kind of structural element and cast around it, either using popping corks to dangle our live crustaceans high in the water column, or egg sinkers to "Carolina rig" the shrimp and drag them slowly along the bottom. On the memorable occasion, we were anchored atop a reef which lies adjacent to the deep channel leading from West Galveston Bay into the expanses of the bayou's "blue hole."

As I recall, the bite was steady, though we were catching nothing spectacular. Rat reds, puppy drum, sand trout and croakers were numbing our hands, keeping us busy plucking shrimp out of the live well. I was first to notice we'd likely run out of bait well before the light of day faded completely. Though our plan was to fish into the gloaming, it looked like we'd be headed home early.

The bites kept coming and my prediction came true. Eventually, I found myself stabbing at a solitary brownie in the live well, and notified my old buddy the gig was nearly up. I skewered the shrimp onto the hook, cast it out and sat down next to him to wait for what would surely be the last bite of the day.

He was doing our standard drill, dragging his rig slowly across the shell-studded bottom, when I saw his rod bend a bit. Not the talkative sort, he said nothing as he began the process of reeling in whatever was on the end of his line. From where I sat, I sensed something unusual. The tip of his rod was not moving around in response to a fighting fish, though the curve in it indicated some kind of resistance.

As he got the end of the line closer to the boat, we both leaned forward, trying to see what he had succeeded in hooking. Simultaneously, we noticed something shiny and inanimate attached to the hook. Scoffing, he said, "It's trash, I guess."

Astonished, we soon realized the prize he'd acquired was indeed comprised partly of trash, but it was much, much more. He had snagged a plastic bag containing at least a full pound of fresh, dead shrimp! The bait was not soft, smelly or old; it appeared to have been in the water for only a short time. How it found its way to the bottom of the channel in twelve or fifteen feet of water on a day when few boats were out on the bay I'll never know.

We laughed, shook our heads and stared in shock, our brains having a hard time accepting what our eyes were clearly seeing. We also kept right on fishing, as we had wanted to do all along. While the light of day ebbed in the west, our conversation centered on the incredible irony of what had occurred. At the very moment when we had run out of live shrimp, Guy dragged a bag of fresh dead off the bottom. Still makes my spine tingle to this day!

Another mesmerizing event occurred many years later, after I had moved to Corpus Christi and started guiding in the Laguna Madre and Baffin Bay. The fishing on the day of the memorable event was slow; trout were showing interest in topwaters, but not sticking very well when they bit. Other lures were drawing no strikes at all. While working my way across a shallow flat and throwing at a subtle grass edge, I succeeded in hooking a small trout. At least I thought I had hooked it.

When I reeled the fish up close to me and lifted it from the water, I could see it had none of the hooks in it at all. The line had "lassoed" the little trout without impaling any of the six sharp points of my Spook Junior's trebles in its flesh. I laughed while removing the dink from the loop of leader line, and made a point to show the customers what I'd done, making some kind of light-hearted comment like, "Anyone can catch a trout with hooks; it takes real skill to lasso 'em like a calf!"

Within no more than five minutes, the customer closest to me hooked a tiny trout of similar size to the one I'd caught. He reeled the fish in fast, skimming it over the surface like a skier. Amazingly, when he got the fish in hand, he turned to me and said, "You're not going to believe this. This fish isn't hooked at all; the line is wrapped around its head." We had lassoed two fish in a row! The double rodeo-hookup shocked and spooked me, causing me to want to move and fish somewhere else.

Another surprising event happened a few years later, on a calm day, while I was fishing one of my favorite rock-studded sand bars with an old friend. Casting topwaters toward the edges of tightly-packed schools of mullet atop the rocks produced three big bites for me in the first half hour or so of the outing. All the trout I caught measured 25 to 27 inches. My buddy was getting frustrated, since he could not entice a blow up.

I coached him a bit on his presentation, and he finally succeeded in garnering the interest of a solid trout. Soon after his lure landed, the speck bit with a loud cupping sound and began thrashing forcefully at the surface once it felt the sting of the hooks on his Super Spook. During the trout's agitated display, my friend's line snapped, eliminating the bend in his rod and leaving his spirit deflated.

The only thing to do in such a situation is to tie on another lure and start fishing again, so he did. The bite had slowed; we could tell the trout were less active by observing the changes in the way the mullet were behaving. Both of us were quiet as we tried to figure out a way to catch some more of the trout we suspected were still lurking in the shadows around the boulders.

Suddenly, a loud sloshing sound broke the silence, in the immediate vicinity of my partner, and my head snapped around instinctively to try and identify the source of the commotion. I clearly saw a trout leap out of the water maybe twenty feet from him, shaking its head from side to side, irritated by the lure still attached to its flesh. The fish succeeded in freeing itself from the annoying trebles, and my buddy's Super Spook flew through the air and landed within arm's reach. As I laughed in amazement, he reached down and plucked the lure from the water's surface. "At least you got your topwater back!" I mused.

Obviously, the fish had not made a conscious choice to surrender the lure; it was merely reacting to stress and just so happened to jump near enough to my friend to make the extremely unlikely event possible. Still, it was funny and truly bizarre the way it all played out.

As it is when the same fish is caught repeatedly. One day in March of 2006, I caught the same 24-inch trout twice during one wading session. My baby trout Skitter Walk had been the focus of regular attacks from numerous trout in the 20 to 25-inch class. Apparently, one of the fish could not contain its enthusiastic love of the plug, as it came to hand twice in a span of maybe an hour. I know it was the same fish because I verified its length and weight accurately both times I caught it, and it had fresh hook holes in exactly the right places on the second occasion.

This year, I caught the same 28-inch, 7 3/4 pound trout on back-to-back days, in almost the exact same spot, on the same lure. Again, the specific size of the fish and the appearance of its larger than normal head identified it as the same specimen. I didn't verify the hook holes on the trout, but I make the claim with confidence.

Also this year, my customer Rick Brill and friend Jason King caught and released the same 30 1/4 inch trout within a few yards of the same exact location, five days apart. I sent Rick to the spot and told him where to cast, working off Jason's reported catch from the previous Sunday, hoping more big trout would be found in the place. While no other fish appeared to be around, Rick did encounter "Jason's fish" again.

When Jason caught it on a Spook Junior, it weighed 8 3/4 pounds; the pictures of it clearly show its belly was loaded with a recent meal. On the Friday when Rick posed for pictures with the fish after catching it on a chartreuse/black FatBoy, it weighed a pound less, since its stomach was apparently empty.

Scrutiny of the pictures clearly proves the veracity of the coincidence, as the fish has a mark across its back where slime was removed, probably because it had been recently handled by a third angler, prior to Jason catching it! The dot pattern on the flank of the trout is also identical, making the truth of the situation obvious.

What lessons can be learned from these weird, unlikely events? For one thing, catching a fish more than once in a small area points out the importance of catch and release. Big trout caught multiple times can provide pleasure to plenty of people. A fish tossed in an ice chest cannot be caught again!

Furthermore, since trout, even big ones, can be caught repeatedly within a short span of time, we know they are not really wise and wary, like some people in the fishing community would have us believe. The older I get, the less credence I give to what I call the "smart fish mantra."

A trout has a brain the size of a pea, even a big specimen. But knowing they are essentially stupid doesn't necessarily make them easy to catch. On the one hand, these strange events suggest "anything's possible." When fishing, accidents, or flukes, will occur.

But it isn't wise to rely on the bizarre magic inherent to such flukes. Most times, bait and lures lost will remain forever out of reach. And while a calf-roper's talents are useful in a rodeo arena, they don't do a lure chunker any good most of the time. Learning how to distinguish unlikely events from the norm is a critical component in the quest for consistency. Placing too much emphasis on rare events and trying to repeat them can lead an angler down a long, dark road which has no pot of gold lying at its end.