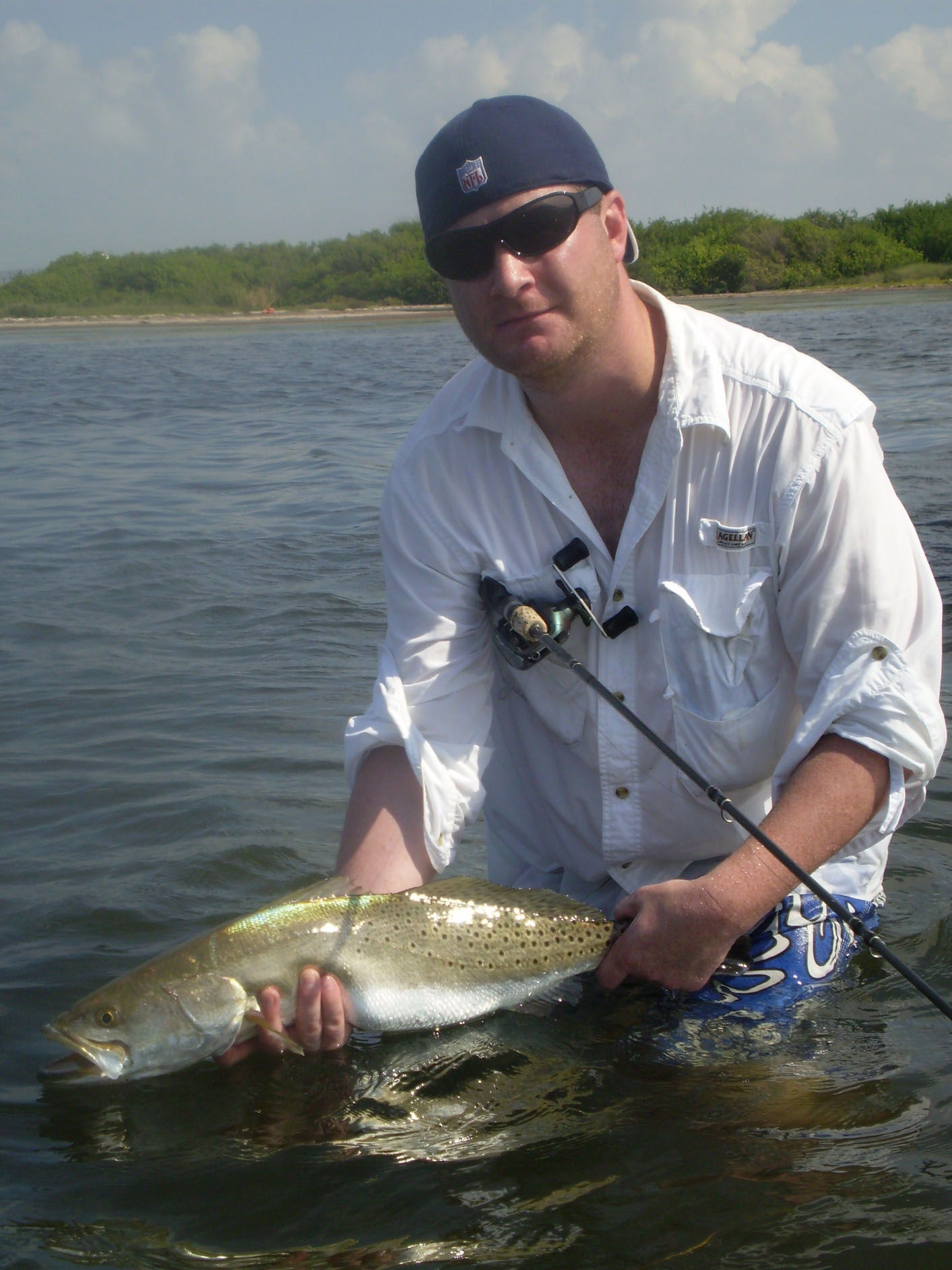 Author's Note: This is a follow-up to last month's article, which described some of the major innovations that have improved twenty first century coastal fishing. Here, I identify the most important one among these many new and better tools.

Fishing fanatics tend to accumulate piles, if not tons, of equipment. For most, generating a complete inventory of equipment would require the use of a legal pad or long spreadsheet. In addition to the substantial and obvious things, a thorough list would likely include a wide array of seldom-used, yet important tools. Coastal wadefishing freaks like me keep a costly collection of items on hand, all of which directly or indirectly enhance our chances for success.

Most of the addicted anglers I know own a boat, and many would include it first and foremost on a list of things they use and need. Almost all would remember to mention the major accessories on the boat as part of their inventory of tools. Items like a GPS unit, trolling motor, VHF radio, anchor, drift anchor, life vests and ice chests pop almost instantly into the minds of those thinking of all the peripheral stuff carried on board their craft.

I'm sure some would forget to document a number of lesser things, like the two-by-four many carry so a prop can be removed when it becomes damaged or spins a hub. Others might neglect to note the spare prop and/or hub too. Also not making the lists might be things like stainless steel carabineers, first aid kits, spare parts for the igloos, extra bulbs for the running lights and so on and so on.

For some, it might not be such a bright idea to add up the price of all the items used in conjunction with the fishing habit. A percentage would surely suffer shock and sell off the stuff when faced with the fact that this hobby can become about as costly as carrying a second mortgage or sending a couple of kids to private universities. Certainly, owning and operating a boat is for many the most expensive portion of the fishing budget, but it's not the whole tray of cheese.

Tackle shops take full advantage of other cravings, a seemingly endless hunger for rods, reels, lines, lures, boots, belts, rod holders, ray guards, waders, pliers, scissors, nets, stringers, shades and so much more. Who among us can say that they don't have lures and other equipment in their closets that never have been and never will be used? And who can say they will never buy such useless junk again?

As fishermen, we are naturally "stuff freaks", some more than others. Doing what we do ain't cheap; that much is certain. Since most of the freaks are of the male gender, there are plenty of wives and girlfriends who have a bad attitude about the fishing avocation. Many have wondered, some aloud, why a certain restaurant is too costly to visit, while a newfangled jiggamabobber that's just hit the shelves at the tackle store is considered a necessary expense. Other spouses wind up engaging in open revolt, spending frivolously on shoes, purses and other frilly things to emphasize their disgust over the river of green flowing down the fishing-obsession drainpipe.

It's obvious that some who've been bitten by the bug need a way to cut back on their spending, in the hopes of preserving relationships and hanging on to a decent shot at retirement. A starting point on the way to reducing spending is to prioritize everything on the list of fishing paraphernalia. Most items come in several versions, some more costly than others.

To people for whom money is no object, making such a list is not necessary. They aren't likely to be reading this anyway; they're probably down at the docks in Port A sipping top shelf martinis and making plans to head out to the East Breaks in the Hatteras. Five dollar fuel won't keep them from chasing billfish and tuna, even though they regularly use more than two hundred gallons a day.

For the rest of us, though, money matters. It makes sense, then, to figure out where dollars can and should be saved when collecting all the garb we compile on our way to the promised land all fishermen seemingly seek. I prefer to go about prioritizing by starting at the top, listing the truly essential gear first.

For those interested in achieving success on the level with fishing celebrities and guides, a boat is definitely a necessary tool. It's not a good idea to cut cost corners when purchasing such an aquatic vehicle, if the goal is to compete on a tournament trail, run a guide business or in any way shoot for the stars when fishing.

Different parts of the coast call for boats with different basic attributes to optimize their effectiveness in the area. Some bays place more of a premium on one of the three characteristics.

Fishing addicts who purchase a boat should consider carefully where most of their fishing will be done and procure a boat best suited to their needs. They should be willing to spend as much as they reasonably can on this tool, which will not only get them where they need to be, but will also provide comfort and return them to the dock safely (or not!).

Of course, I'm talking about motor boats here. Motor boats need motors, it's safe to say. When powering a motor boat, it pays to hang the newest, strongest, most dependable unit possible on the transom of the craft. Trying to cut costs by bailing out the neighbor and buying his old outboard so he can retool is rarely a good idea.

The list of modern accessories for use on bay boats is lengthy indeed. The GPS and Power Pole are two tools that have truly revolutionized the sport of wadefishing as I know it. I can navigate more safely and precisely than ever before with the aid of what I see and save on my screen, and I can fish more of the time without walking back to retrieve the boat, thanks to the remote control I purchased with my Power Pole.

For me, running a boat without a GPS and a Power Pole would be like buying a pickup truck without air conditioning. Where I live and work, these are all necessary things. Those who fish primarily from the boat would likely include a trolling motor on this list. Not everyone will find it possible to purchase, rig and run their own boats, I know. Those who are able to choose to do so would be well advised to find other things on which to save money.

Though a boat is a hugely important tool for some in the fishing community, I don't tout it as the most valuable tool for all fishermen. For any inshore saltwater enthusiast, particularly those who fish with artificial lures, there is one tool above all others that does more to determine the consistency of successful efforts. That tool is really two in one--a rod and reel unit. Ideally, the rig must be of high quality, meaning both components are as light and durable as possible, and that the rod has the proper feel and flex for the methods and style of the angler who wields it.

Advances in technologies used to produce rods and reels have been significant in recent decades. Anglers now have the option of using featherweight, strong sticks of a kind unknown to the old salts who spurred the sport's popularity. I must here disclose that I am partial to two brands, Laguna rods and Shimano reels.

Laguna makes some inspiringly sensitive rods with just the right feel for me. They make models with a variety of different actions, like most other companies. People who prefer primarily soft plastics will favor something with more flex than I will need, since I use bulky, fish-imitating plugs almost exclusively. Point is, the guys at Laguna make a rod that's right for just about any inshore need.

I know other companies do too. My aim here is not to shamelessly promote one rod company above all others; it's mostly to emphasize that anyone purchasing a rod should spend every dollar they reasonably can to get the right tool for their needs. It makes no sense to attempt to save money on this critically important tool. The same can be said for the reel too.

I use Shimano Chronarch MG 50 reels. They aren't the most durable I've tried, but they are the lightest by far. That's of critical importance to me. I've been fighting carpal tunnel syndrome for years now, and they help keep me functioning at or near my optimal level through the long hours of chunking and winding, day after day.

And beyond the need to set up a combo that will allow anglers to produce desired presentations with the lures they like to use, this is the most important thing; a rod and reel must have a low enough weight to allow for hours of use while limiting fatigue as much as possible. Lighter is simply better when it comes to fulfilling this need.

I know some will not be able to afford a rod and reel that costs in excess of $500. But I strongly believe that every angler who intends to fish regularly should spend as much as they can on this one tool. Testing gear by borrowing from friends or guides is a good idea before the buying is done; shaking the tip of a rod in the aisle of a tackle shop really doesn't allow one to know whether it's an optimal match for style and needs.

The bottom line criteria for me is this; if a tool will genuinely help me catch more fish, I will find a way to own it. If a required tool doesn't legitimately serve this purpose, I will more than likely look to save money if purchasing one. I place waders, boots, pliers, shades, filet knives and other necessary stuff in this category.

For all lure chunkers, including the guy walking into the water from his pickup truck, the purist paddling in on a kayak, even the goggled tournament pro racing his competitors to a fishing hole seventy miles from the dock, the most important piece of equipment consistently impacting the number of fish hooked and caught is the one they cradle in the palm of their hands. A rod and reel is to an angler what a putter is to a golfer; it's the tool that has the most significant effect on the ability to score.