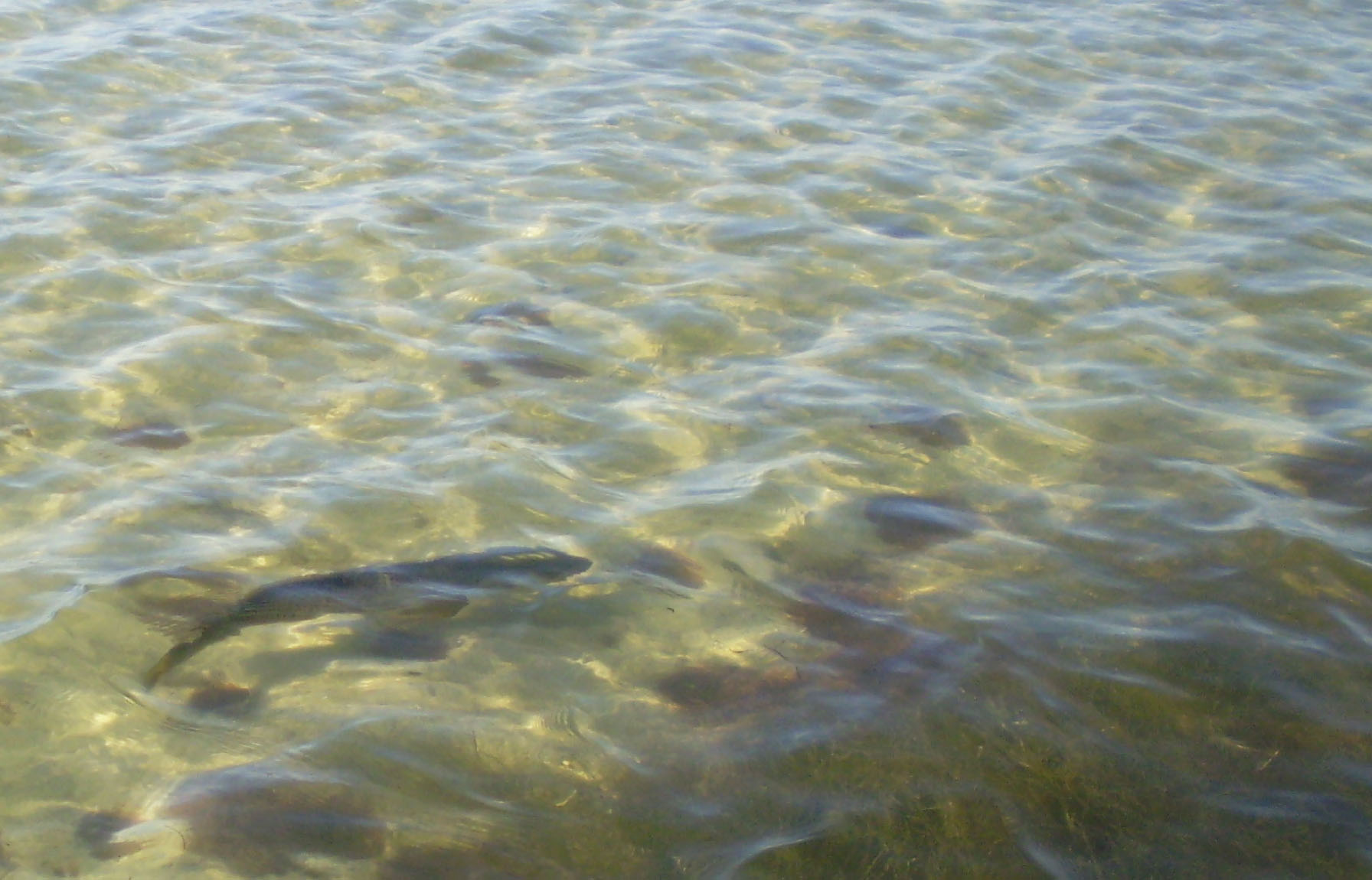 Shallow sand bars amply covered with seagrass are great places to search for some of the big trout that make the Upper Laguna Madre famous.
The Laguna Madre differs from most other Texas bays in a couple of significant ways. First, it is relatively shallow throughout its expanse and second, it has virtually no oyster reefs. Consequently, vast stretches of this treasured ecosystem superficially appear to have an intimidating sameness or lack of variety in features.

Like all other bays, the Mother Lagoon does have its defining elements; some are more obvious than others. The best fishing in the upper reaches of this estuary, stretching from the north end of the Land Cut to Corpus Christi Bay, will almost always be associated with one of four prominent features: grass beds, sand bars, channels and/or rocks.

Grass beds help give the Upper Laquna its elegant and scenic effect. When the water is in its naturally clear state, they appear as dark green blankets spread over the bottom. To those accustomed to fishing in the relatively murky waters of Upper Coast bays, looking on these waving beds can create a nearly feverish level of anticipation. I remember the joy I felt when I first walked among them, as I realized I’d found my way to a target-fishing paradise.

Sea grass carpets most of the bottom of the bay, with the exception of the portions covered by depths greater than about five feet. The largest section of grass-free bottom is found in the deep hole adjacent to Yarbrough Pass. The silty floors in most of the channels in the Lagoon are also devoid of grass, particularly the Intracoastal Waterway. Otherwise, virtually all of the bottom sprouts some kind of sea grass, which makes for a grand spectacle to gaze upon, but also creates a kind of problem. Though grass is nearly everywhere, the fish simply aren’t.

Locating fish within the meadows normally requires finding one of two things, either potholes within the beds or large mats of dead vegetation. The potholes, or sand pockets, as some refer to them, appear as pale, cream-colored spots within the darker, emerald beds. They can be found near land in the shallows or farther offshore; most hold fish at some time or another, especially those adjacent to other features.

Potholes lying next to mats of dead grass almost always hold at least a few fish. The persistent winds help form the mats by driving floating vegetation onto the bank. Since the prominent wind in south Texas is a southeast wind, most of the mats lie on the west shore, along the famous King Ranch. A haven for all kinds of small sea creatures, these mats are the anchor for the first link in the food chain.

Focusing on potholes near the mats is a good way to find trout and redfish, but there are other fish-holding features within the mats themselves. When tides are relatively high, water will cover them entirely, creating a super shallow lagoon above the spongy, soft layers of rotting strands. Tiny fish and other organisms occupy these skinny puddles, probably as a way to escape the predators who can‘t go there.

Slight depressions in the edges of the mats create highways between the tidal puddles atop the mats and the deeper waters of the bay. These corridors become ambush points where deadly encounters occur, especially when tide levels drop and leave the tops of the mats high and dry. The ends and margins of the mats always have potential to concentrate schools of fish as well.

The sand bars in the Laguna Madre also consistently hold fi sh. Two types of bars exist in this old bay, those made by currents and wind and those made by the hands of man. Natural bars exist on both sides of the bay, more prominently on the east side, where a meandering whitish dropoff runs along much of the shoreline. The edges of that sand bar slope off rather sharply in many places and are not among the best places in the Lagoon to find fish regularly.

The sand bars in Night Hawk Bay, the Meadows and Yarbrough Flats are all exceptions, since they are associated with gradually sloping, shallow flats, grass and potholes and even grass mats. When looking for fish on the east side of the Upper Lagoon, it pays to focus on sand bars in areas like those.

Mostly in the middle of the bay lie the man made sandbars, or spoil banks. Spoil banks on the upper coast are often studded with oyster beds, but in the Lagoon, they exist as shallow sand bars bearded with beds of grass. Some spoil banks are better than others in terms of fish holding capacity. Man made bars with gentle slopes and ample potholes in the grass along those slopes usually hold more fish than spoils with sharp drop offs and fewer potholes. As with the grass mats, the ends and edges of the bars will often hold fish, especially where there are sets of potholes along and near these margins.

Piles of rocks and/or other debris near the edge or end of a sand bar can also create habitat for the creatures upon which trout and redfish feed, providing a starting point for the food chain. Many of the spoils in this bay have such junk around their ends, so anglers exploring these areas should proceed with caution and mark the humps, rocks and pipes they find. Certainly, burning the edges of the bars is rife with danger, since some of the submerged obstacles are barely covered and are capable of snatching lower units from the motors of the careless.

The spoil banks within the Lagoon are, of course, associated with a related set of features, the man made channels. The dredging of these channels, most prominently the ICW, led to the formation and ongoing restructuring of the sand bars. As material is removed to create and maintain the channels, it is piled up nearby, making the sand bars.

Currently, the ICW is the only channel receiving regular maintenance, but in the past, oil companies dredged other ditches in order to move heavy machinery over the water. These partially silted channels, many of which are visible on satellite images like those found on Google Earth, are utilized by trout, redfish and flounder. Temperature extremes can concentrate fish in the channels of the Laguna Madre.

Especially in mid-winter, when water temperatures are at their lowest, the ditches hold nearly all of the fish in the bay. Dead end channels surrounded by grass beds and potholes can fill up with fish in Jack Frost’s months. Areas immediately adjacent to such channels will also hold fish in the heat of summer, especially on scratching low tides.

There are also natural guts or channels in the Upper Laguna Madre, most of which run parallel to shore. A few run perpendicular to shore and into shallow lakes surrounded by land. These guts can hold trout and redfish, of course, predominantly where they dead end in the lakes themselves and where they empty out into the main body of the bay. This type of feature is more common in the Lower Laguna Madre, compared with the waters north of the Land Cut.

Just north of the Cut, along the shore of the Kenedy Ranch, lie an abundance of rocks, the fourth main defining feature of the Upper Lagoon. A shallow, narrow backwater pond fronted by lines of crusty rocks in the area is aptly dubbed Rocky Slough. The water fronting this shore is deeper than that along the King Ranch closer to Corpus.

These rocks are not the kind that pile up when dredging is done. Studies indicate they are the fossilized remains of carbon-based sea life forms left behind in long lost times when this was the beachfront shoreline of the Gulf of Mexico. Though they were once believed to be identical to the rocks found in Baffin Bay, the Kenedy rocks are now thought to be similar but made up of different organisms. They can be most treacherous, both to lower units and to those attempting to wade among them.

Often covered by bright green, slippery algae, they have extremely uneven surfaces and holes deep within them. I’ve found it nearly impossible to traverse some of the rocks near Rocky Slough, and won’t lead clients into their midst anymore. Nevertheless, the boulders attract and hold monster trout and redfish; that much is known. One way to fish them safely is to troll outside the edges of the rocks and cast to them from the deck of a boat.

This is, of course, not necessary north of Baffin, on the King Ranch Shoreline. Contrary to what some people think and the fact that none are shown on maps or on GPS screens, there are numerous, and I do mean numerous, rocks along that famous stretch of land. The Ranch’s rocks are mostly “bottom huggers,” sticking up no more than a foot or so into the water.

Still, they can be a hazard to boaters; planing off on a set can ruin a propeller or lower unit, so idling far away from the bank before taking off is wise along this shoreline, especially when tides are low. Finding low-lying sets of rocks and noting their locations can help one find fish more consistently in the area, of course, particularly where sets are found near pretty potholes, grass mats, channels and/or sand bars.

As with any bay system, the best fishing spots in the Lagoon are those in which multiple fish holding features are found within close proximity to each other. Any area having all four of the defining elements within yards of each other is likely to hold fish a good percentage of the time. Areas with two or three of the elements deserve more attention than do those with only one. Focusing fishing efforts on these types of areas will allow one to locate fish more consistently than will blindly and mindlessly drifting along and hoping the boat floats over a school of fish.

Many novices fish the Upper Laguna Madre that way, just drifting and hoping. Predictably, their catch is often meager when compared with those who do some homework by studying maps and satellite images, searching for things under the surface and marking them, then applying what they know about the season, tide levels and water temperatures to make predictions about where to start the search for fish.

Experts at finding fish in this bay don’t get tunnel vision on just a few spots; the resident trout and redfish move around quickly and can’t be counted on to appear in the same places over and over again like they do in other bays. Still, some spots hold fish more often than others. Focusing on the four defining features of the Lagoon helps narrow the search for fish in the awe inspiring expanses of this exquisitely picturesque, yet potentially puzzling body of water.