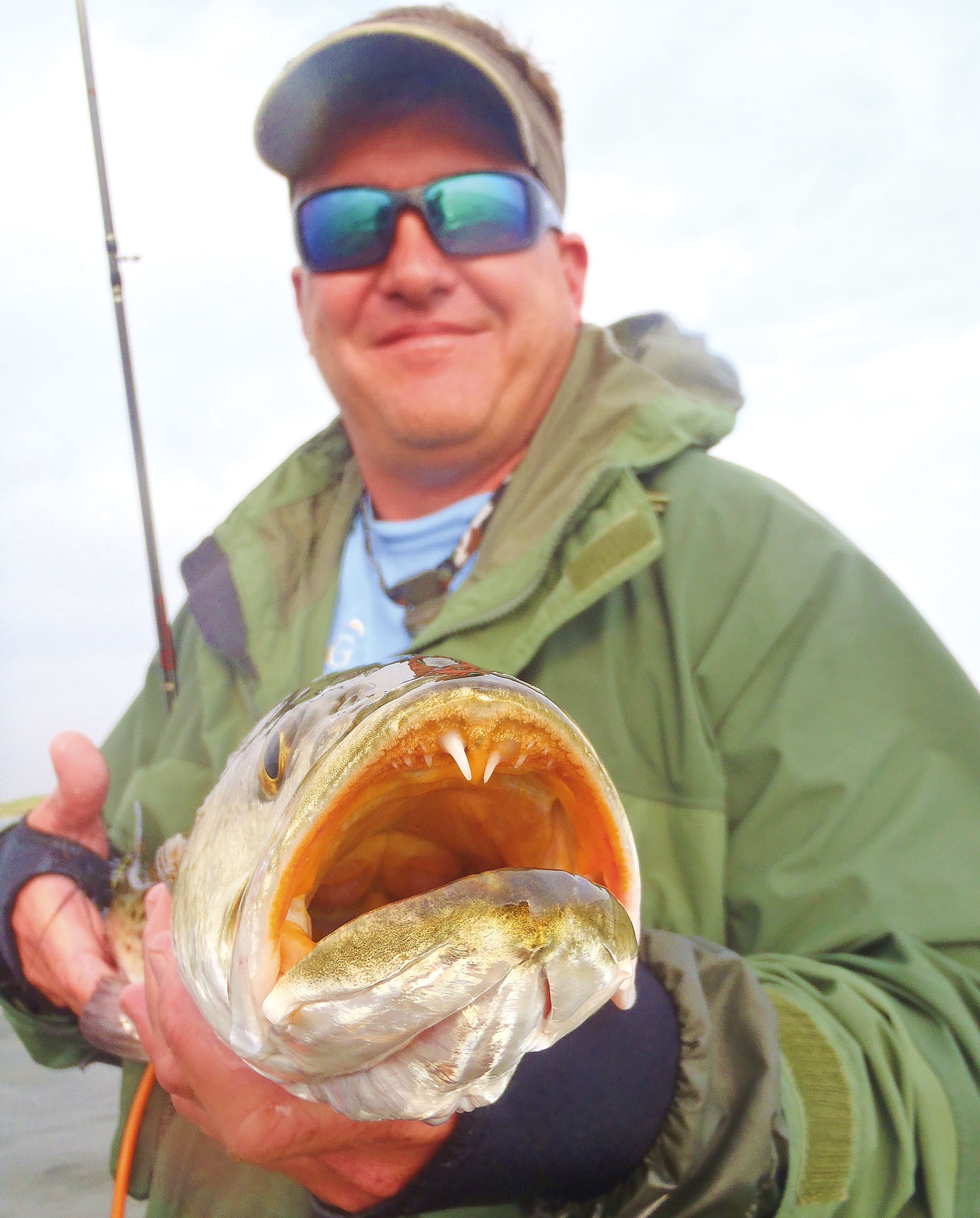 Watching the mouths of hungry trout champing at topwaters stirs the heart of every lure-chunker.
When the bite is hot, it's often possible to use favorite lures presented in various "generic" ways and catch plenty of fish. But when fish become lethargic or tight-lipped, the specifics of lure choice and presentation become critical components in the quest for more bites. Consequently, serious-minded lure chunkers constantly search for plugs and methods capable of generating strikes during tough conditions.

Over the years, I've identified three lures which stand out prominently because they often produce when others won't. Though they are radically different in some ways, they share several common attributes, especially when consideration is given to the presentations with which they are most often deployed.

One of these three "lures" is not merely a lure; it's a combination of a lure and another device. I refer to it as "the cork and the jig", because it involves dangling a soft plastic worm under a float. Some anglers recognize the deadly effectiveness of the combination and use it almost all the time, but I use it sparingly, mostly when I perceive it to be the only way to catch a fish.

The thing I don't like about fishing with a cork and a jig is its tendency to limit my creativity. The method essentially eliminates the potential for using rhythmic twitches of the rodtip to create side to side movement in the head of the lure. In other words, the presentations which work with a cork and jig are somewhat "crude", causing me to lose interest and focus easily, and taking away what I love most about lure fishing.

Basically, deploying a soft plastic under a float involves twitching the rodtip vigorously enough to create splashing and rattling noises with the cork. This is best done using sharp strokes of the rod to activate the flex of the blank. When the tight line yanks the cork forward through the water forcefully enough to create noise, the soft plastic riding a couple of feet beneath it is jerked upwards and forward, before it flutters back down and settles under the float.

Some potential creativity with the method does exist, of course. An angler can adjust the intensity of the twitching, alter the number of twitches between pauses and change the duration of the pause. Obviously, one can also use different types of corks and soft plastics, as well as different sizes of jigheads. Additionally, the length of the line between the cork and the jig can be altered, from a few inches up to maybe three feet.

All these subtle adjustments to the system can be important. Generally, in windy conditions and murky water, louder corks and more vigorous presentations are preferred, whereas calm conditions call for quieter, more subtle methods. Lighter jigheads tend to work best in less windy conditions and shallower water; heavier ones make more sense in sloppy chop and greater depths.

The key to the effectiveness of the combination of a cork and a jig is most likely a product of the way it attracts and triggers fish. Predatory fish are attracted to splashing and clicking sounds, which mimic feeding activity. After they are drawn in by the sound of the cork, the soft plastic is found dangling enticingly in their face. Especially in high winds, the worm will be moving a little, even during a pause. Fish which might not pay attention to other offerings seem motivated by the perceived easy opportunity this method suggests.

The same thing might be said for the second of the three "tough bite busters" I regularly use, a topwater endowed with spinning propellers. I learned how productive these "prop baits" can be years ago, and have more recently rediscovered them, mostly in the form of the MirrOprop. For years, I neglected them, because they are much like the cork and jig; they cannot be deployed with the same amount of finesse as can other floating plugs and twitchbaits.

The whirring blades riding on their ends make it impossible to walk the dog with these flashy lures. Because this is true, the methods most useful with them appeal to me less than those I employ with conventional topwaters and lipless twitchbaits. It's difficult for me to maintain focus and intensity when I'm throwing prop baits, unless the fish are biting them regularly.

In many cases over the last couple of years, I've seen prop baits (or slush baits as I also call them) transform a seemingly dead bite into something pleasantly productive. Normally, this occurs in warm weather, when skies are bright, and wind speeds are in the moderate to strong range. I like them best in the heat of the summer, and usually bring them out after the morning bite on conventional topwaters like Super Spook Juniors begins to wane, while winds pick up and light penetrates deeper into the water column.

In a couple of significant ways, these noisy plugs are similar to the cork and jig. First and foremost, they make sounds which resemble feeding fish. Secondly, they float when they are paused, so fish attracted to them tend to find a somewhat stationary target to strike. Third, they have triggering attributes which work when they are sitting still. Especially when winds and waves are up, the blades on these plugs turn slowly and twinkle when the lure is bobbing on the surface; fish sometimes seem incapable of resisting such an attractive "sitting duck".

Many of the strikes enticed by these plugs come in the form of foamy, acrobatic attacks which involve the fish flying out of the water. Nothing excites a lure-chunking junkie more than watching fish champing at plugs on the surface. When prop baits turn a slow bite into a blow-up festival, they are among my most-cherished possessions.

Another family of plugs is also capable of bringing a seemingly dead bite back to life. Floating/diving broken-backs have done this for me numerous times, especially when water temperatures are moderate in the spring and fall. My old partner John Gill and I experienced a real epiphany related to broken backs years ago, while fishing a pile of rocks in Baffin Bay.

The bite was slow until I tied on a Bomber Long-A; then we found out how selective the fish in front of us were that day. I caught about a dozen trout on the wiggling plug while John tried everything else he had in his box, in an effort to prove some other plug could produce the same results. He got virtually no bites on his conventional topwater, sinking Corky and soft plastics. Eventually, he walked back to the boat and dug a Long-A out of his box, and both our rods soon became regularly bent.

We caught fifty or sixty trout that day on the Long As, occasionally switching over to our other favored lures without any success at all. For some reason, the fish were strongly motivated by the attributes and movement patterns of the jointed plugs; the color of them didn't seem to matter much.

I now realize the Long A and other jointed crank baits like the Cordell Red Fin are similar to the cork and jig and prop baits in a couple of ways. Though they don't make a loud splash on the surface, they do generate considerable noise and water displacement, especially when deployed with rhythmic, sharp, short twitches of the rodtip. Making a couple of jabs to activate the rattles in the plugs while they dig down into the water column in a zig-zagging fashion seems to be the best way to attract the attention of nearby fish.

Most of the strikes come on the pause following the jabbing strokes, while the lure is rising slowly in the water column. It now occurs to me this is much like what happens with the other two aforementioned lures--vigorous, noisy movements cause the fish to show interest, and when they do, they find something which is nearly motionless, but not entirely so. The diversity of this movement pattern creates a brilliant combination of attracting and triggering qualities.

None of these three lures would appear on my list of favorites in terms of how I prefer to fish. For me, nothing is more satisfying than taking a plug with little or no "built in" action and using rhythmic twitches of the rodtip to trick fish into striking it. With these lures, my style and creativity are somewhat muted, so my attention span with them is normally limited. But when they speed up a slow bite and produce quality fish when other lures won't, they rightfully earn my favor.

I now believe these three lures (and the methods used with them) work well in tough conditions for the specific reasons listed above. They all seem to work best when presentations involving starts and stops are deployed. When they are moving, these lures create plenty of attractive, enticing noise and water displacement, which seems to garner the attention of predatory fish in the area. When they are paused, they present the fish with a seemingly easy target, one which lingers invitingly in the strike zone.