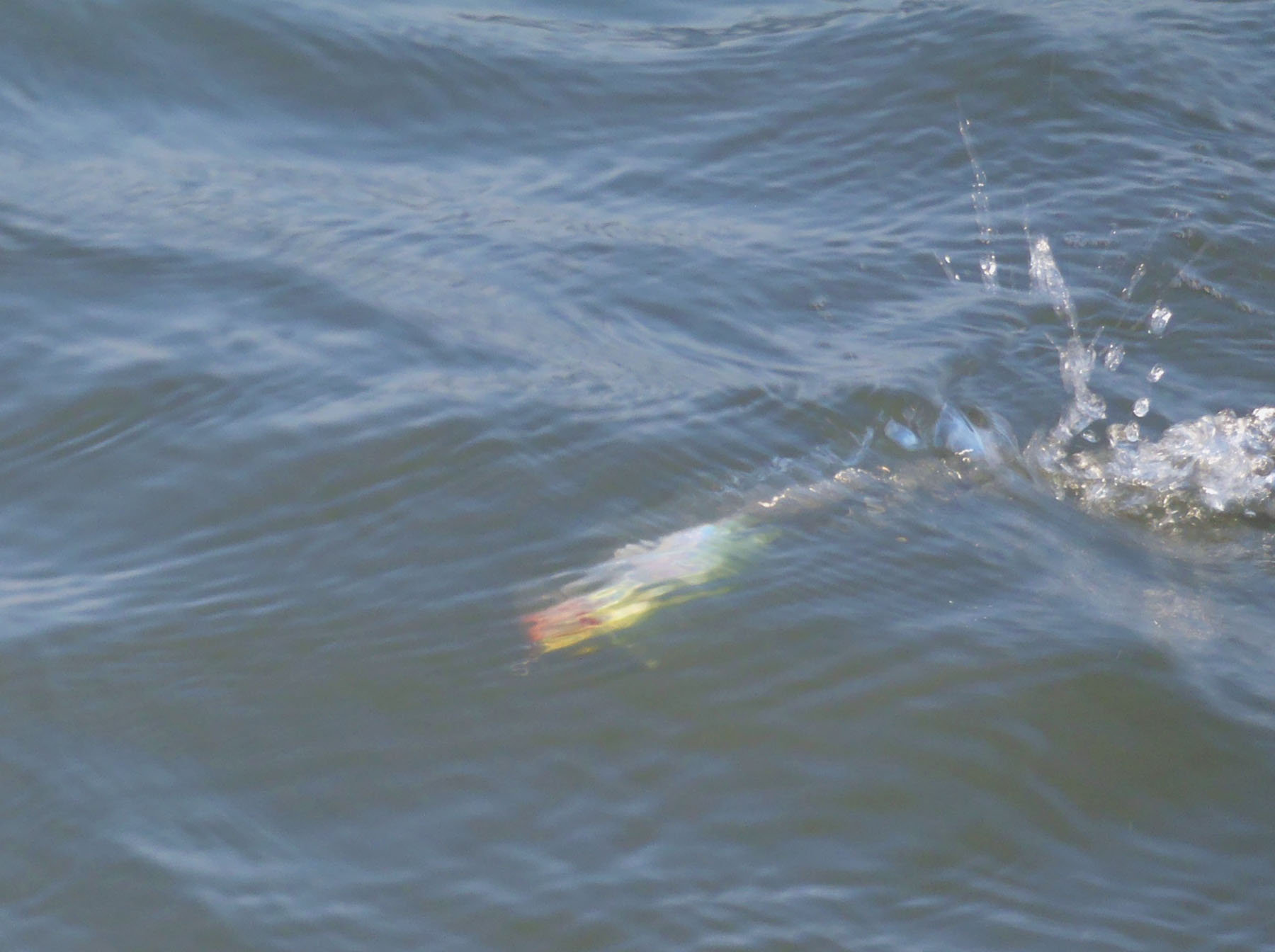 The MirrOProp creates an enticing splash when moved with short, sharp jerks of the rodtip. Many strikes on this lure come while the lure is still, as the blades slowly spin and twinkle.

Over the last few decades, anglers and tackle companies joined forces to identify and produce many effective lures for catching trout and redfish. Originally, most of these plugs were made for bass fishing, but several companies now offer lines specifically designed for use in saltwater. The majority of coastal anglers choose from four favored lure families i.e. spoons, soft plastics, twitch baits and topwaters.

A vast selection of sizes, styles, and colors exist within those groups. Many time-tested plugs have a place in this arsenal, including the half-ounce silver spoon, the bone topwater, the gold broken back and the dark-red tout. Various brands of these well-known offerings are favored by experts, novices and beginners.

While such famous lures need little promotion, other effective and productive plugs surely remain undiscovered by inshore experts. Certainly, some likely candidates for success have been largely ignored.

Take a recent trend in the soft plastic world as an example. For many years, saltwater tackle companies and coastal anglers saw little need for soft plastics in the swim bait sub-family. Regularly, I mused over the potential effectiveness of such lures and suspected they were underutilized in the salt.

Now, numerous companies include swim baits in their saltwater soft plastic inventories. Savvy anglers can use these buoyant, pulsating plugs in a variety of depths, by controlling the speed of the retrieve and altering the sizes of the weights (if any) on the hooks to which they're attached.

Many swim baits are made to closely resemble the prey species they imitate. When finicky predators are found in clear water, the natural appearance and subtly enticing movement patterns of lures like the DOA Bait Buster and Hogie Major Minnow sometimes elicit more strikes than other offerings. Once used almost exclusively by bass fishermen, these specialty soft plastics have become a fringe selection for many coastal lure chunkers and are in fact steadily moving toward a more prominent position near the core of some quivers.

Other potentially productive plugs still lie outside the orb of coastal anglers spotlights, though they could be effectively utilized if discovered and pulled from the shadows. Deep-diving crank baits come to mind as fitting this description.

I think of these plugs as lipped members of the twitch bait family, though many work best when reeled straight in without any rod tip action. Several lipped twitch baits have long held a place in coastal anglers tackle boxes, including the Bomber Long A, the Cordell Red Fin and Manns Baby One Minus.

Shallow-running, floating/diving plugs like these standbys have produced many trout and redfish. Recently, related new plugs have been developed. Some are constructed in multiple, jointed sections so their bodies slither convincingly when retrieved. Lures like those in the Flex series from Strike Pro are gaining popularity.

Deeper-diving crank baits, though, are virtually ignored by inshore lure chunkers. Personally, I can imagine many coastal scenarios for which deep-diving crank baits would be ideal. I'd be interested to see how experts like bass pro David Fritz would incorporate their cranking strategies into the salty scene.

A perfectly suited crank bait undoubtedly exists for many applications in the brine, including bumping shells on ship channel spoils, banging off granite jetties or serpulid rocks and making mud puffs on the silt-layered bottoms of deep holes in rivers, creeks and man-made channels. I know some redfish tournament contestants have already discovered this and regularly employ various wobbling deep divers while competing in their events.

Still other lures with tremendous upsides have yet to be discovered and deployed by any significant number of people. For instance, topwaters carrying a spinning blade or blades, like the old Shaggy Dawg, are scantly used. I remember slinging them along the beach in summers past, among waves teeming with menhaden which regularly surfaced and created a flitting noise which the rotating props on the slush baits effectively mimicked.

Surf-running specks attacked the noisy plugs with satisfying violence as I ripped them through the suds, creating a swooshing, foamy splash with every sweep of my rod. Though I didn't use prop baits for several years, MirrOlure recently sent me some of their new MirrOProps, plump little floating plugs with a spinner on both ends. I've already used them to catch both trout and redfish, and find them particularly effective in windy conditions. On more than one occasion, the number of blow ups on the prop baits was noticeably more frequent than on conventional topwaters.

Utilizing a floating plug with props in conjunction with a soft plastic makes sense in some scenarios. Dangling a worm under a noise-making device is a well-known, deadly-effective method for catching trout and redfish, especially in murky water and/or windy conditions. In fact, a number of redfish tournament anglers have apparently decided to deploy the cork and jig almost exclusively. Many favor Gulp! products suspended under a rattling, plastic cork. You either win with 'em or get beat by 'em, some say.

Trailing a soft plastic on a short leader behind a topwater plug makes even more sense to me some of the time, since the floating plug also serves as a legitimate second target for strikes. Prop baits (and chug baits with concave heads), made to be worked like popping corks, are great choices for the floating portion of the dangler system, as are other noisy, dog-walking plugs like He Dogs and Super Spooks.

Surely, suspending a DOA shrimp under a Shaggy Dawg is an unconventional way of utilizing the attractive attributes of two lures simultaneously and might be described as fishing on the fringe. Other potentially effective, unusual techniques come to mind, some of which I've tried briefly.

I remember reaching a point of desperation in a Matagorda Troutmasters tournament years ago, while fishing post-front conditions in the Diversion Channel. Having caught trout there a week earlier, we returned during the event to hide from strong northwest winds, but found the current too strong to allow us to maintain contact with the bottom while fishing soft plastics, though we tried using heavy jigheads, up to half an ounce.

I devised a potential solution to the problem and placed a Bass Assassin on a worm hook, Carolina-rigging it with a one-ounce egg sinker. Though the method didn't work for me that day, Carolina-rigging buoyant soft plastics would undoubtedly be effective at times, especially for probing deep structures like ship channel spoils and well pads.

I've even contemplated replacing the floating worm with a floating/diving, shallow-running crank bait like a Bomber Long A. When targeting sluggish fish in deep holes, dragging such a combo slowly along the bottom, pulling the crank bait down to make a mud puff, then allowing it to rise, might be the ticket to drawing strikes from trout and redfish. A shallow-running floater/diver rigged behind a weight facilitates a slower overall presentation than a deep-diving crank bait, which requires a faster retrieve to keep it near the bottom.

Retrieve speed can be a critical component in a presentation designed to target any fish, particularly when those fish are in a negative feeding mood. Most any lure, combination of lures, method or system known to produce bass and walleyes will work on trout and redfish some of the time. I predict coastal inshore fishing will eventually evolve to more closely resemble fishing for those and other freshwater species. Some of the tools and techniques now thought of as on the fringe will likely move into the mainstream.

I see a future populated by inventive anglers chunking scent-trailing topwaters, slender skim baits with replaceable tails made to mimic needle fish, even hollow piggy perch lookalikes carrying spring-loaded systems which make them shudder enticingly. Until these selections become available (if indeed they ever do), curious coastal anglers can move toward the fringe through experimentation with existing tools and technologies.

Innovative fringe techniques include all of the following: (1) Texas-rigging soft plastics, (2) rigging them weightless or on shank-weighted hooks like the H&H Flutter Jig and swimming them through the shallows, (3) slow-rolling spinner baits in front of schooling trout and reds and (4) steadily turning buzz baits over rocks and grass beds.

An even more daring approach might be to attach a saltwater fly to a short length of leader and trail it behind a suspending twitch bait like a Smithwick Rattlin Rogue. Seems like a dynamic outfit when glass minnows hatch in the spring!

The most enterprising might venture farther into the unknown and employ methods considered more useful in the Great Lakes than the Coastal Bend. Trolling spoons, inline spinners and crank baits behind the boat (perhaps beneath planer boards) might produce more trout and reds than most of us would ever imagine. Virginia resident Sheldon Arey tells me people in his home state troll the waters of Chesapeake Bay and catch plenty.

I recall a neighbor I had in Bayou Vista back in the 90s who regularly trolled the canals in his john boat, offering a silver spoon endowed with a blue stick-on dot. He contended the blue dot was the key, but I believe the system, not the lure, accounted for why he caught ample trout in the daytime where others couldn't manage a bite. He even landed a nine pound specimen one day!

It makes me wonder what I might catch if I would spend some time trolling around deep rocks or under rafted bait out in the middle of Baffin. I know I'll have plenty of space to operate. At least at first, until others see the light and join in the newfound fun beyond the fringe.