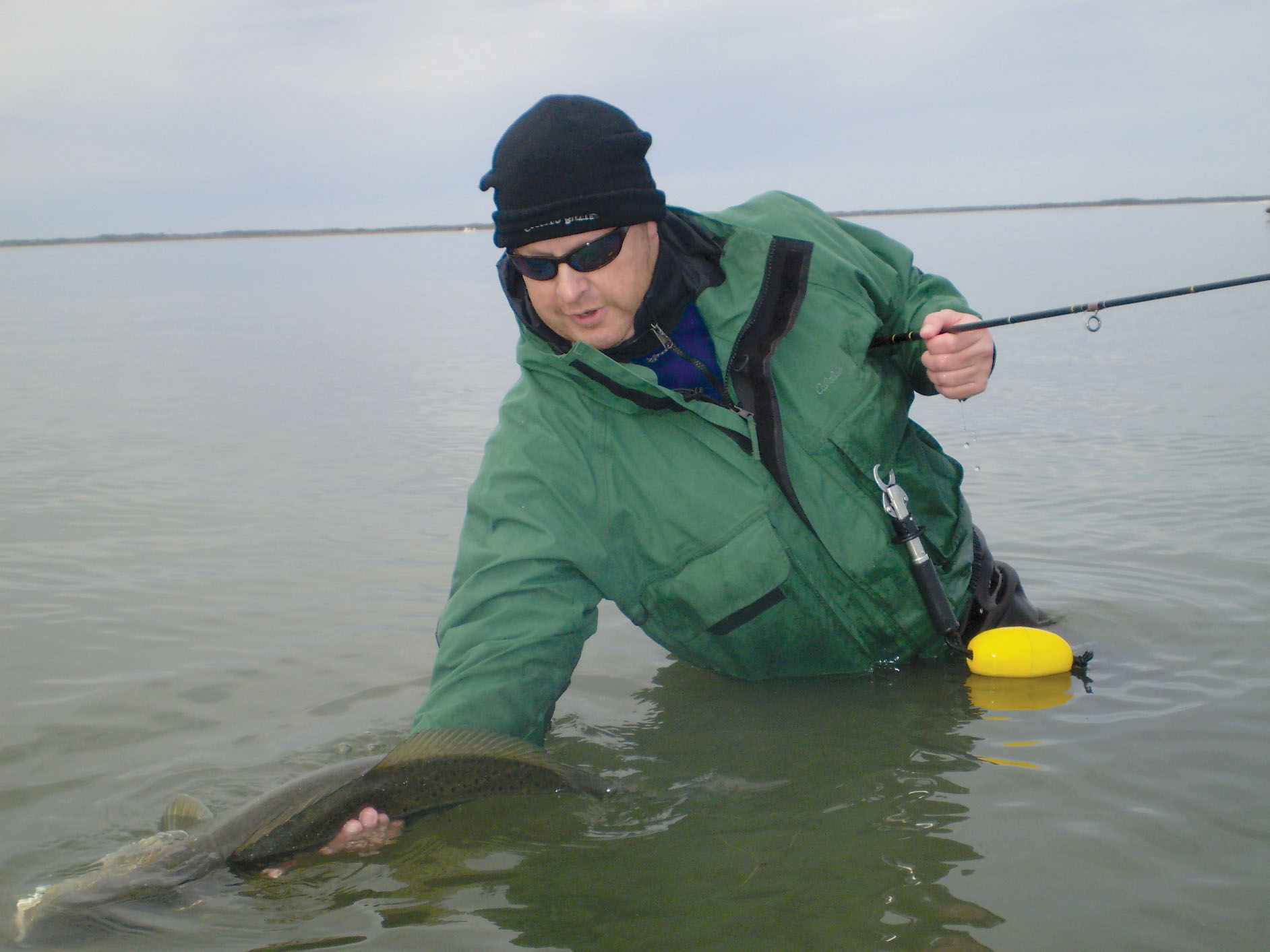 Scott Enderlin doing his part to preserve and sustain the trophy trout fishery.

Author's Note: The following italicized definitions are quoted from a humorous and entertaining book by Henry Beard and Roy McKie called Fishing: A Dictionary For Constant Anglers, Weekend Waders, and Artful Bobbers.

Advice: Two or more pieces of contradictory angling information contained in a single phrase or sentence. Some experts assert that daytime fishing within 48 hours after a full moon is often tougher than normal. I believe the opposite, and have documented many fine outings one or two days after a full moon, including catches of individual trophy trout up to 31 inches, days with numerous big trout (as many as 11 over 27 inches) and sessions with up to 200 trout and reds. Thanks to those who choose to stay on the couch because it's a day or two after a big moon; you leave more space on the bays open for those of us who fish!

Angling: The art of fishing, as practiced by those who seek to catch fish not for profit or for food, but rather for the sport involved. The commonly accepted source of the term "angling" is the ancient Indo-European word, anka, meaning "hook" or "to fish with a hook," but several other words are likely candidates, including enka ("unwise expenditure" or "useless task"); unglo ("one who is tormented by insects"); onku ("loud or frequent lamentation"); angi ("to deceive"); inkle ("to repeat a foolish act"); onklo ("possession by demons"); and angla ("love of pointless suffering"). Though it applies to both bait soakers and lure chunkers, this definition is clearly most relevant to those of us who stubbornly choose to use artificial lures exclusively.

Camera: Small, but quite heavy object used by anglers to store small amounts of water and a canister of spoiled film. Most cameras today, being digital, don't have ruined film in them. Some are even waterproof, but more importantly, the vast majority are left in the boat by waders (or worse yet in the truck by drifters) and are therefore useless in the timely documentation of the catch of a prized fish, resulting often in the unfortunate demise of said prized fish.

Catch and Release: 1. Term for stretch of public stream where fish caught must be released alive. 2. Term for stretch of private stream where trespassers caught are released after a lecture, a series of threats, and a brief introduction to a large dog. It's also an activity, too little practiced, known to have the power to preserve and enhance populations of fish, which have no voice with which to lobby in support of the activity.

Croaker, Grouper, Snapper: 1. Informal names for three groups of saltwater game fish. 2. Informal names for three basic types of anglers: the noisy croakers, who cough and clear their throats when absolute silence is essential; the overly convivial groupers, who borrow your lures, sample your lunch, and help you lose fish during netting; and the mean-spirited snappers, who respond to an angler's casual remark about the weather with a pointed remark that he go smoke a fish. It is my sincere hope that your guide is neither of the three; may he be simply a Skipper who provides you a direct connection to a Whopper.

Fish: The only living creature in any given stretch of stream, river, lake or bay that doesn't have a hook in it and isn't smoking a pipe. Aforementioned creature may also be the only one in the area that doesn't automatically flee from a good spot just because some boaters pass by.

Hot Spot: 1. Place on any given stream or lake, usually known only to the locals, where fish can be found. 2. Place in the center of the palm of the right hand of locals where money may be placed to help find 1. See: www.fishbaffinbay.com for details related to Lucky Sevens Club.

Habitat: Place where a particular species of fish was last week. This indicates that, in Texas, habitat is dwindling, since some species of fish are noticeably scarce in places where they were once pleasantly abundant. See: spotted seatrout in the Coastal Bend.

Knot: A tangle with a name. Should not be confused with a backlash, which is a more elaborate tangle with fancier names, many of which cannot be printed here.

License: Permit issued upon payment of a modest fee that allows fishermen to lose lures in a specified area. The permit also justifies the burning of vast volumes of fossil fuels and investment in numerous gadgets and instruments, most of which are useless in the hands of the untrained. It also provides the wicked more opportunities to tell creative lies to their spouses, sometimes concealing secret trips to gentlemen's clubs.

Limit: Maximum number of a particular fish that an angler can take in a day. This number varies from place to place and species to species, but like the speed of light, it is a largely theoretical restriction with little practical application. Note here that lowering a limit gives the number greater practical application, hence a more significant impact on the fish. See: red drum in Texas.

Lure: Anything used to attract fish. There are basically two kinds: those fishermen swear by, and those they swear at. Corkys are both at the same time! This reminds me also of the old adage that says there are two kinds of fishermen: the ones in our group, and the ***holes.

Solitude: The state of being closer to nature than to the nearest flush toilet. Clearly the opposite of the noisy state of affairs on a Saturday morning in the hour following the timed release of a line of painted racing boats carrying two goggled tournament anglers each.

Yard: Unit of measurement. In angling, 17 inches. Additionally, 27 inches is actually 30 inches, at least for speckled trout anglers, for whom 7 pounds is also 10 pounds. For redfish tournament anglers, particularly those who specialize in placing copious chunks of ice in a livewell, 28 inches is actually 28 inches.

Zzzzzzz: 1. Sound made by patient angler waiting for a bite. 2. Sound made by insect about to deliver one. There are two more similar sounds uttered by Texas coastal waders: Kablooj... and DeDoink!