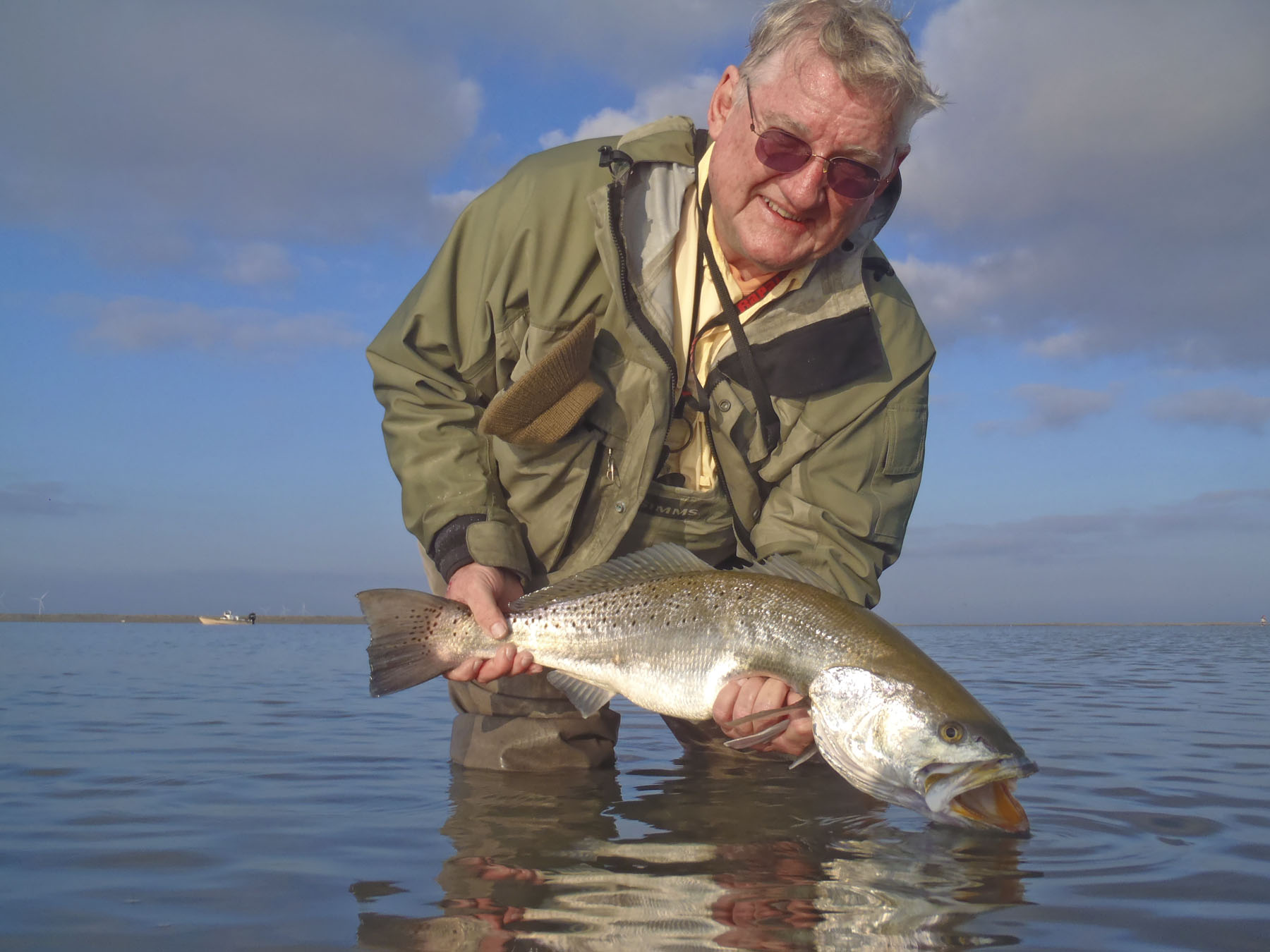 According to all reliable sources, reducing the limit will result in more fish surviving to larger sizes. That would be good for those of us who love trophy fishing. Here's Ron Blackard set to release his lifetime-best trout, a 30 1/2 inch, nine pound specimen.
Recently, biologists inserted tracking devices into spotted seatrout in both Texas and Louisiana as part of studies to document the movement patterns of these highly regarded fish. Some of the early data suggests trout are more mobile than experts once thought. The studies definitely prove captured and released specks can survive and thrive, even when carrying foreign devices.

A few fish have been observed to travel great distances after their release. Here in Texas, a number were tagged in Flour Bluff after being brought to the scales at a tournament. Subsequent to their release, some lingered in the vicinity of the weigh-in, but many headed south, presumably back in the direction of the sites where they were caught. A decent percentage reportedly made their way quickly to the Land Cut, where they stayed for quite some time.

The willingness of those trout to swim the considerable distance (approximately forty miles) from Laguna Shores to the Land Cut is somewhat surprising to me. I've long thought of this species as being relatively sedentary, after reading reports published by biologists, who for decades drew conclusions primarily from tag, release and recapture studies.

Apparently, speckled trout are not so sedentary, at least some of them. I would, however, caution anyone against jumping to strong conclusions based on the reactions of a few fish captured in one place, transported over long distances in a live well, tagged, then released in another place. Such treatment could have a significant impact on a fish's behavior after release. In fact, I'd be truly amazed if it had no impact whatsoever.

The willingness or tendency of a trout to swim over long distances when it has not been captured, transported and relocated might be completely different. Of course, the ongoing studies also include the monitoring of trout tagged quickly and released in the same place where they were caught, so the movement patterns of those fish can be considered.

While reading Tide magazine recently, I came across an article describing a study being done on speckled trout caught, tagged and released in Lake Calcasieu, across the border in Louisiana. Several interesting points came out of that piece, including the fact that 85% of the tagged fish had (as of the time of its writing) stayed entirely within the boundaries of Big Lake. Only one fish, a six and a half pound female, left the lake and never returned. A few others ventured into the Gulf and returned to the lake.

Perhaps more importantly, most of the fish were observed to be favoring the same areas repeatedly. One female frequently appeared and lingered in a small cove near the ICW along the northern fringes of the estuary. Others seemed to stay within relatively small parts of the lake which had no obvious structures or fish-holding features, surprising those doing the studies. They'd predicted most of the fish would relate to prominent points, reefs and other known "hot spots."

The study did support the veracity of some beliefs long held true by local trout experts. For instance, Big Lake's specks seem to prefer wintering in the northern reaches of the lake and moving south toward the Gulf in summer. Overall, this study suggests the trout in Big Lake are more sedentary than nomadic, also that fish living in the estuary don't mix much genetically with those outside the estuary.

Understanding the species' natural tendency to migrate over long distances (or lack of such tendency) is a critical component in determining whether a Gulf-wide, statewide or estuary-specific management plan is best. If spotted seatrout wander all over the Gulf, moving from bay to bay or even state to state, one plan for the entire Gulf Coast would be best. If the fish within each bay tend to stay in that bay, an estuary-specific plan would be optimal.

While researching this piece, I came across another study, published on the internet in March 2010, which attempted to verify the existence of subpopulations of spotted seatrout in Texas waters. Texas Parks and Wildlife biologists Joel Anderson and William Karel used gill nets to collect their fish and analysis of the DNA in those fish to draw their conclusions.

Basically, they identified four subpopulations of trout within Texas waters: one in Sabine Lake and its adjoining Gulf waters, another centered on the Galveston Bay system, a third stretching from East Matagorda to Corpus Christi Bay and the last including both the Upper and Lower Laguna Madres. (Some aspects of their research indicated separate subpopulations for the ULM and LLM). Their conclusions support Parks and Wildlife biologists who claim they can identify the region of origin of a speckled trout through analysis of its genetic material.

Anderson and Karel believe their data suggests zones of low population density acting as barriers between subpopulations. They also assert that, "spotted seatrout exist in a series of overlapping subpopulations with sufficient migration as to prevent accumulation of significant genetic divergence. The evidence from the current data further predict that there may be areas on the coast of Texas in which small-scale migration is fairly limited."

Apparently, speckled trout do not form one continuous population throughout the Gulf. Subpopulations exist, though not on an estuary by estuary basis, except where those estuaries are somewhat distant from one another, with relatively narrow passes between the estuaries and the open ocean, as in the cases of Sabine Lake and Lake Calcasieu.

Their data would, on the surface, support regional management of the speckled trout as the best choice, through implementation of region-specific recreational bag limits. In Texas, a region-specific limit was put in place in the Lower Laguna Madre a few years ago. The effects of that lower limit have been noted variously by recreational anglers and TPW officials.

Recreational anglers seem almost universally to believe trout fishing in the LLM is much better for medium sized fish than it was before the limit was lowered. Parks and Wildlife verifies improved numbers of twenty to twenty five inch fish in their gill net and creel surveys, but as a whole, they are less enthusiastic about the positive impact of the lowered limit.

Sounds to me like the fishing has generally improved, and that's a good thing! On the other hand, the evidence suggests some recreational anglers might have changed their behavior when harvesting trout in response to the lowered limit, perhaps by culling out larger individuals to harvest, in a conscious attempt to make the overall weight of their bags heavier.

This response raises a flag of alarm, and points out a larger issue that needs to be considered as officials continue to evaluate whether to create regional or statewide recreational bag limits on trout. People sometimes respond to change in unpredictable ways. What is predictable is that they will respond in some way.

For instance, it's likely some number of people who had fished almost exclusively in the Lower Laguna Madre stopped fishing there when the limit was lowered. Many of them undoubtedly moved north, preferring the higher limits still in place in the Upper Laguna. The displacement of those anglers couldn't have had a positive impact on Upper Laguna trout populations. If Anderson and Karel are correct, and all trout in both Laguna Madres are part of the same subpopulation, inadvertently increasing fishing pressure in part of the region was a counterproductive management strategy.

TPW biologists recognize some areas of the coast as having greater "carrying capacity" for speckled trout than others. They also believe trout in different regions generally stay within those regions. Without considering the human factor, implementing regional bag limits would therefore seem to be the obvious choice. But regional limits carry the potentially destructive effect of generating extra fishing pressure in areas with the highest bag limits, so I support a statewide limit.

In spite of a recent announcement that no such change is coming this year, I'm hopeful TPW will eventually lower the limit on trout to five statewide. Doing so would reduce the number of fish killed by those who regularly keep limits, while at the same time potentially increasing the number (and size) of fish caught by the average angler per trip.

A statewide limit is easier for game wardens to enforce. Additionally, lowering the limit on the fish to five everywhere sends the clearest message to everyone who purchases and uses a saltwater fishing license in Texas. The proactive and enlightened message illuminates greater respect for the trout and the people to which their lives are inexorably linked.