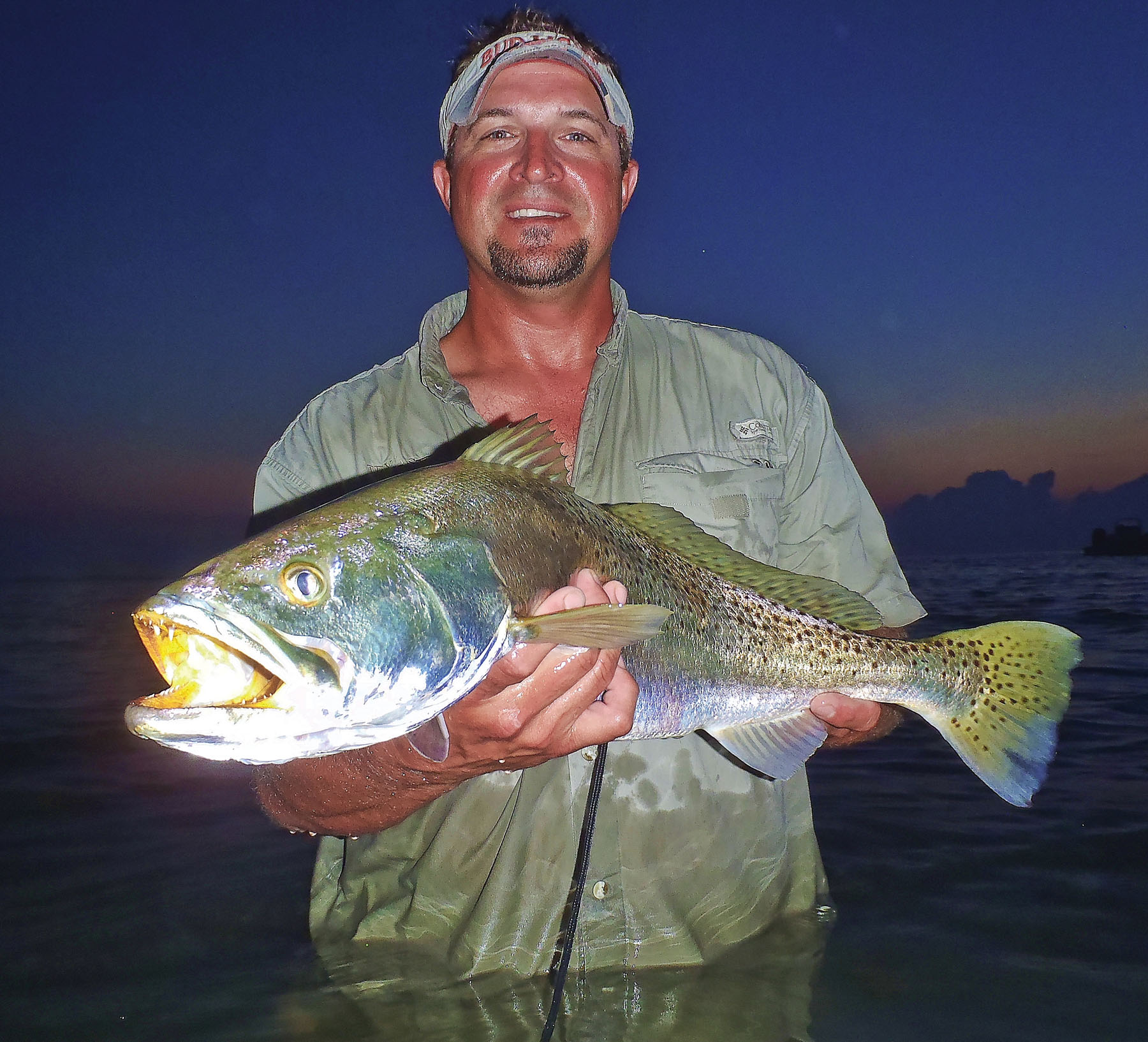 Chris Beasley caught his personal best trout during the transitional time from night to day. Regardless of the season, early morning hours are often productive ones.
October is a time of change. Cold fronts revise Texas' skies, replacing sweltering summer air with the crisp atmosphere of autumn. Tide levels rise and fall in response to the circling winds. Various kinds of fish and other sea creatures begin their annual migrations; all of these mutations anticipate the arrival of winter.

Autumn fits into the calendar year the same way afternoon fits into the hours in a day. In the analogy, October is like the early part of afternoon, when the light of day is still somewhat bright, just starting to fade. Considering this analogy carefully can help one make better fishing decisions, taking into account the seasonal trends and how they affect the efforts to locate and catch trout, redfish and flounder.

Technically, fall begins in the latter part of September, on the day of the equinox, when the length of day and night are equal. As the days get shorter after the equinox, cooler weather becomes more common. Few things stir the restless hearts of sporting men and women like the mild days of autumn, complete with cloudless, azure skies, high barometric pressure and low humidity.

Following as they do on the heels of so many balmy, blistering summer days, this kind of "Chamber of Commerce" weather is welcome and inspiring. Significantly, the climatic change of autumn happens more slowly in the water than in the air, and upper parts of the Texas coast are affected more significantly and sooner than estuaries in southern reaches of the state. Additionally, the weather fifty or more miles inland is markedly different from the weather along the immediate coast during this transition.

Pulling up the weather history for Corpus Christi in October of 2012 and comparing it with the same period in Conroe helps make the point clear. In Corpus, the historical average temperatures at the beginning of the month are a high of 87 and a low of 69, whereas in Conroe, these averages stand at 83 and 59. By the end of the month, Corpus averages drop to 81 and 61, while in Conroe, they fall all the way to 73 and 51.

In other words, it's normally quite a bit cooler on average in Conroe than in Corpus in the first full month of fall. Last year, the measured temperatures in Corpus in October ranged from a high of 101 to a low of 48. On 19 days during the month, the high temperature in the Emerald City exceeded 90 degrees, while the same benchmark was never reached in Conroe. Looked at another way, Conroe had 9 days with a high temperature less than 80 during the month, while Corpus had only 6.

Anglers who live inland and who more strongly feel the early effects of the cooling air of autumn might be fooled into thinking the seasonal change is happening faster in the waters along the coast than it really is. Especially in the first half of October, fishing on the coast can be much like it has been all summer. Trout, redfish and flounder don't move far from their summer haunts while the weather stays sticky and hot.

Anglers who continue to fish mid-bay reefs, looking for slicks and other signs as they have throughout the dog days will normally produce better catches of trout than those who mistakenly assume a few moderate days will stir the fish into making significant moves toward shallower areas where they will be abundant later in the fall. Specks tend to stay put in deeper parts of the bays during the first half of October. Immature redfish, on the other hand, often school up on flats near passes leading into the Gulf, while mature ones spawn in the surf on the beach sides of those same passes. Flounder will begin to show in numbers along reefs and around the drains and muddy flats associated with marsh entrances, but will not start earnestly moving toward the ocean along established routes.

In most years, a big tide fills the bays to their brims sometime around the autumnal equinox. Especially during the first half of October, trout fishing in Texas is usually affected by the presence of this "bull" tide. Hot water and high tides can make fishing tough, especially for those of us who prefer wading as a primary method. If trout are holding along the edges of deep structures, where we can barely reach them on normal or low tides, we will lose contact with them when the tide rises, assuming they don't move shallower.

Many times they don't move shallow, particularly if water temperatures are steady and high. One way to adjust to the presence of a bull tide is to switch from wading to boat fishing, assuming the trout have stayed in the places they've preferred all summer. When using a strategy like this, it pays to remain vigilant for signs indicating the fish are still present, like slicks, mud stirs and plenty of active bait in the area.

While a bull tide keeps the water in the bays deep, and when temperatures are mostly summer-like, the estuaries will typically be crowded with copious amounts of various kinds of forage species. The problem of "too much bait" is most prevalent in the first half of autumn. During this time-frame, using a soft plastic in the Upper Laguna Madre, for instance, can be frustrating and frivolous.

Often, while working a worm, numerous pecks and thumps can be felt during each cast, as swarms of piggy perch and other little critters crowd around and compete for what they perceive to be an easy meal, frequently snipping the tails off the worms and rendering them worthless. When fishing in the vicinity of massive amounts of prey species like pinfish, croakers, needlefish, ballyhoo, menhaden, glass minnows and others, it can be important to try and "match the hatch" when targeting the species which feed on them. Doing so means throwing plugs which resemble fish, not shrimp.

Conventional topwaters work well during this time of transition, as do floating plugs with concave heads and those bearing propellers. Floating/diving and suspending crankbaits are effective, both broken-backed and straight versions. Of course, lipless twitchbaits like Paul Brown's Original Lures, MirrOlure Catch 5s, Catch 2000s and others within this family are famously productive too. Soft plastics, which more closely resemble shrimp, will work, but they tend to attract the attention of the hordes of small fish.

Shrimp are typically abundant in Texas estuaries in autumn. Perhaps no other sentinel of fall rings more clearly in the ears of coastal anglers than the high-pitched squealing and squawking of seagulls hovering over migrating schools of shrimp. When trout, redfish and other predators gang up beneath the traveling crustaceans, a game of life and death plays out near the surface of our coastal waterways. Below the shrimp, hungry jaws snap and silver sides slash, while above them, spread wings steady the birds whose shiny beaks remain ready to claim any prize chased out of the water and into the air.

When blustery north winds first push against the standing high tide, most of the action will be found in the coves and back lakes, but after a few strong fronts begin forcing the bull tide back out to sea and consequently draining the marshes, the action will become centered in open areas of the bays, while the shrimp make their way seaward. This usually happens during the second half of October, especially along the Upper Coast.

In stretches of bays lying between marsh entrances and passes leading to the Gulf, through which the shrimp must pass when they migrate, the deadly game predictably plays out on a daily basis in the weeks leading up to Halloween. Typical places to find working birds during the annual migration include upper portions of Sabine Lake, Trinity Bay, East and West Galveston Bays, East Matagorda Bay, San Antonio Bay, Copano, Aransas and St. Charles Bays and Nueces Bay.

The search for working birds is one of the most anticipated and celebrated aspects of fall fishing for many anglers up and down the coast. The action will heat up in response to the cool down earlier on the Upper Coast than on the Lower Coast, and it will consequently come to an end earlier too.

In parts of the Lower Coast, it is not uncommon to find birds and fish working schools of shrimp at the tail-end of autumn, whereas on the Upper Coast, most of this activity winds down before the turkeys are stuffed, baked and plated with candied yams. While the birds hover, it's often possible to use a stealthy approach and stock up on slurping school trout. Anglers interested in catching big trout should ignore the flocks and schoolies and try to coax bites along mullet-laden shorelines. In the second half of October, flounder will become more and more numerous on shallow flats adjacent to their main migration routes, as will hungry redfish, who fatten up before moving into the depths of the open ocean to live out their adult lives.

During this month of change, the harvest moon bloats the bays with a big bull tide, then Jack Frost's winds blast the water back out again. These strong tidal swings, concurrent with dropping temperatures and diminishing daylight, serve as a kind of beginning to the end. During this time-frame, the lingering sizzle of summer gives way to the coming chill of fall, motivating fish to move and feed before wintery weather settles in. Anglers who pay close attention to the timing of the alterations and who don't rush the return of autumnal patterns will be most successful during this tumultuous transition.