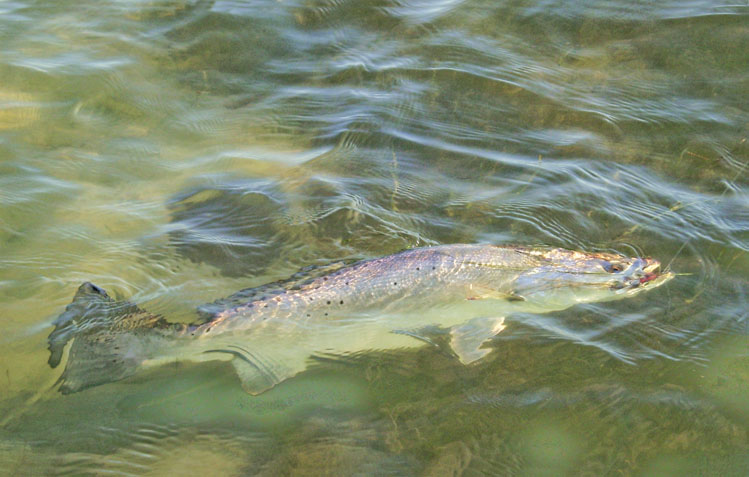 During the weeks spanning from the middle of November to the middle of January, several socially and culturally significant events, seasons and traditions take place in Texas. Most of us in the Lone Star State celebrate major holidays: Thanksgiving, Christmas and the ringing in of a New Year. Many of us also participate in time-honored rituals related to the open seasons for hunting deer, ducks and doves.

For lure-chunking trophy trout enthusiasts like me, this transitional window signals the end of another style of fishing and the beginning of our most productive time-frame. Normally, during these eight weeks, water temperatures all over the state's estuaries fall into the fifty-something degree range, often staying at those values for days at a time.

Obviously, such a change in average temperatures brings warm-water, bait-soaking patterns to a screeching halt, while generating scenarios favorable to lure chunkers. Cold water tends to make trout behave predictably, stirring their survival instincts and sending them to the same places repeatedly. Typically, the best fishing for trophy trout at the end of autumn and into the first part of winter occurs near deep basins where stunned trout ride out the chilling effects of strong cold fronts.

The best places lie in the lee of land, close to north shorelines which buffer the water from bitter blasts of frigid air. In spaces like these, wind exerts less influence on wave action, and the water tends to stratify better than depths on windward shorelines and in areas without protection from the breeze. Sometimes, calm pockets in the lee can hold water several degrees warmer than surrounding areas.

In such situations, trout which sat dormant on the bottom in the basins while water temperatures dropped eventually rise and begin searching around shallow structural elements in these pockets for something to eat. Often, their hours or days of inactivity make them ravenous indeed. Catching them can become stupid-easy for a while, as the warming waters urge them to gorge voraciously.

Many times, these short-lived frenzies happen as nightfall descends on coastal waters, particularly if bright skies have allowed the shallows to warm rapidly a couple days after a strong front raked across the waterways. Astute anglers also recognize the fact that ultra-clear water exaggerates the tendency of big trout to feed nocturnally. Accordingly, many head out in the afternoon and continue fishing until the blanket of darkness fully envelopes the shallow estuaries.

I've made many memorable catches during these transitional weeks on the calendar by fishing around shallow structures near wintering basins in the gloaming and under starry skies. Slow-sinking twitch baits in dark colors usually work best to trigger strikes from hungry trout which rise off the bottom and head for these places with their jaws snapping recklessly. Some of the best spots border on area shorelines, while others fringe shallow sand bars, reefs and rock formations lying farther from land. Most of the best bite occurs in water from about knee to waist-deep in scenarios like these, when trout first shake off the numbing effects of a strong front and vigorously feed.

Some trophy trout hunters say to begin a search for prime places to encounter hungry fish in cold weather by focusing on the type of bottom in the area. Specifically, they assert the bottom should consist of soft mud. I certainly have caught many big trout over a muddy bottom in chilly conditions, but now believe the availability of food trumps any other consideration for trout in winter. Cold-stunned specks won't search out a particular type of bottom when they become gluttonous; they'll search for food and attack it where they find it.

If sand or grass covers the bottom at the closest likely feeding station (shoreline grass mat, oyster reef, sand bar or rock pile), the fish won't likely notice, blinded by their urge to feed. They need to eat and to do so without wasting energy. Lacking cognitive awareness of these facts; they operate out of biological necessity and instinct. Strong urges make fish behave predictably, so catching big trout around shallow structures at dusk and into the early hours of night often proves quite easy when weather makes an upturn after a harsh front during the holiday season.

Throughout most of the early part of the cold season, catching trout in the dark after nightfall does happen more easily than catching them in the hours immediately prior to dawn. But I've had ample experiences catching numbers of big trout at the end of the night during cold weather too. On several of these occasions, I chose to fish for a few hours at the end of a nippy night because I knew a big tournament would blast off just prior to daybreak.

In one instance, I and my customer Robert Tortorice and his father and friend focused our efforts near a shallow sand bar lying next to an old, silty dead-end channel in the Upper Lagoon in January, tossing sinking Fat Boys around potholes in depths of about three feet. Rob caught a trout just under 30 inches, his friend caught one of similar size, and both bit before the first rays of light glimmered in the east.

I remember us chuckling later, as the tournament boats raced by us on their way south, where brown tide tainted the waters, instead of staying in the gin clear stuff in which our giants had bitten. No one caught trout as big as ours in that event. In fact, the heaviest fish the guys in the tourney brought in weighed around six pounds, if memory serves me. Part of our success came from our willingness to head out early and fish the ridiculously clear water when darkness provided the big fish a way to ambush their prey. Other, similar experiences further convince me of the efficacy of targeting monster trout in the darkness before dawn, even on cold days in December and January.

Targeting them this way while conditions deteriorate makes little sense, but once an upward turn occurs after the passage of a strong front, smart anglers won't pass up the opportunity to catch some fish late at night and into the early morning hours. Of course, prolonged warm spells during the weeks from Thanksgiving to just after the New Year create different scenarios and patterns. In the best situations, the feeding mood of the fish elevates rapidly, and floating plugs draw strikes repeatedly.

Warm, calm weather in December generated an opportunity for customer Adrian Valdez and me to sight-cast a bunch of big trout one day a few years back. We couldn't see the specks in the water, but could clearly discern their impact on the fish they attempted to eat. Every time we'd see a mullet jump out of the water, we'd watch a mud-boil emerge at the site. Once we put two and two together properly, we stopped fan-casting and stood on point, searching for a mullet leaping within casting range.

On numerous occasions, lures plopped down into the muddy spots produced vicious strikes from trout measuring up to 28 inches. We caught about fifteen fat females and hooked and lost a few true heartbreakers on the eerily serene day; they danced on their tails and agitated the silvered, slick surface of Baffin Bay, throwing water valiantly. I've experienced other epic topwater bites in late-fall and early-winter, mostly during warm, windy periods, sometimes for an hour or so immediately before and after the passage of a cold front.

The whistling of fresh north winds signals the passage of a front and can create one of the best times to throw large floating plugs at monster trout. I label anything which reliably stirs up a bite as a "stimulator", and a frontal passage fits the description clinically. I've seen a stale bite turn to champing madness instantly, when howling, new winds first blast onto the scene. Normally lasting for just an hour or so, this short-lived boost in feeding activity can provide the opportunity of a lifetime for people tossing topwaters in places known to hold trout of magnum dimensions.

On most occasions, fishing from the middle of November to the middle of January does not involve encounters with fish showing such high levels of activity. More often, lethargic sows display limited willingness to rise and take any lure skimming along the water's surface. Like on the day my old tournament partner Ari Schwartz schooled me on the need to drag a soft plastic on the bottom, when I figured a sinking Fat Boy would urge plenty of trout to take a bite.

I added up the details of the day incorrectly, assuming the recent warming trend would stir the fish into moving around and hunting. Dark skies and water temperatures in the high 50s buoyed my confidence in slow-sinking twitch baits. I didn't catch much, in the end. Ari caught a couple dozen fish, including three trout which averaged about seven pounds, by rigging a plum Bass Assassin on a sixteenth-ounce jighead and slowly dragging it along the bottom, short-hopping it up briefly every few feet or so.

This lure choice and presentation have worked beautifully for me on many days since. I've learned to start most days off with a low and slow approach during these weeks on the calendar. If the catching becomes easy on soft plastics hugging close to the bottom, I'll switch up to other offerings eventually. On several memorable days, I've been able to catch fish first on worms, then on Fat Boys and last on large topwaters like Super Spooks, matching my lure and presentation to an upswing in the feeding mood of the fish.

On these days, things changed rapidly, right before our eyes. During this transitional season, responding to rapid changes provides a key to consistency, for anglers who make catching trophy trout the goal. Surely, placing a priority on tracking and tricking monsters makes perfect sense this time of year. My data indicates a much higher likelihood of handling fish which meet or exceed the eight pound mark in December and January, compared to October and November.

Specifically, the frequency with which we catch them stands over five times as high for the two colder months, compared to the warmer ones. To make the whole scenario sweeter, many people who will return to the bays in February stay distracted by holiday bells and whistles, pulled afield to participate in campfire rituals during December and January. For these reasons, I'm never able to fill my books entirely during these statistically sterling months.

Those of you reading this who'd like to take a legitimate shot at catching a lifetime-best trout on waters not covered by clamoring crowds should call and come fish with me during this transitional time, when serenity, solitude and the consistency of catching run high, and the number of anglers on the water dips to the lowest point of the year.