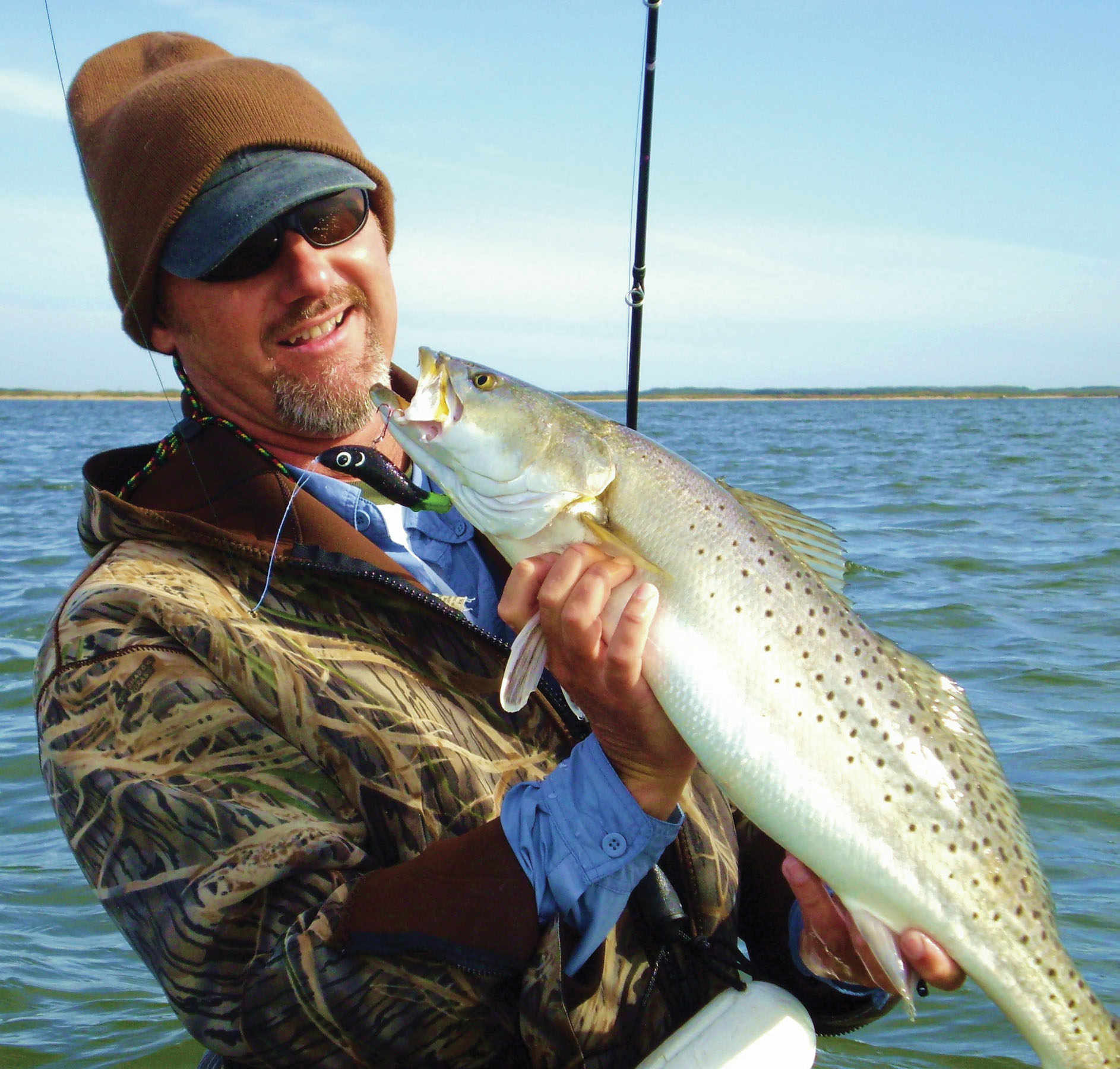 For some anglers, the face to face interaction with big fish is more important than the exact dimensions of those fish.

While working as a fishing guide focused primarily on helping others catch large speckled trout, I spend time on the water with clients of highly variable experience and skill levels. These hopeful anglers have diverse dimensions in mind when it comes to defining their targeted trophy.

Most hope to catch a trout meeting or exceeding some specific size, often depending on how many big ones they've caught previously. My own policies provide guidance for all in the establishment of trophy parameters. I operate with a boat rule related to the harvest of medium and large specks. When keeping trout to eat, we keep those from fifteen to about twenty-two inches, but none between about twenty-two and twenty-eight inches.

A client who wishes to keep a trophy specimen for skin mounting purposes (or to make a painting using the skin of the fish) must catch one exceeding twenty-eight inches and eight pounds. Most clients don't kill fish meeting those criteria either, choosing instead to take accurate measurements with a tape and a Boga Grip and use the measurements in conjunction with pictures and/or video to generate an authentic looking replica mount.

Many settle for the pictures and videos themselves as reminders of the catch. In our technology-driven world, digital images are in some aspects superior to wall mounts as a way to commemorate the catch of a special fish. After all, these documents can be instantly shown to the world via YouTube, on Facebook, and as email attachments, whereas a wall mount can take two years or more to return from the taxidermist. Far more people will see and comment on images of a fish posted online than will view a mounted fish hung on someone's office wall.

One cool way to memorialize a great catch is to take a digital image and have an artist create a larger painting of the image. Such a painting is permanent, potentially dramatic, and it includes the smiling face of the angler and possibly others who were present at the time the catch was made.

Some purists are content to simply release all the trophies they catch without taking pictures or even accurately measuring their fish. These folks are concerned more with the transient, personal joys of the moment than the recording of the event for all posterity. Such people know trophy fishing, like life itself, is a journey; they consider no particular fish to be the destination. Others have different purposes in mind when seeking trophies, including setting records and winning contests.

Generally, people who avidly target monster trout fall into two categories: those who typically put a priority on length and those who think mostly in terms of weight. The majority of accomplished trophy trout anglers fish primarily by wading and carry a Boga Grip while fishing. Not only does the Boga make landing and handling fish easier in a less harmful manner, it also allows one to determine each trouts weight down to the quarter pound.

Measuring the length of a speck, especially an extremely long one, is not so easy, even with a rod carrying a tape measure or several marks denoting significant lengths.

Holding a fish vertically next to a rod while it dangles on a Boga gives only a general idea of its length. Obtaining measurements accurate to the quarter inch requires one to stretch a flexible measuring tape alongside the trout or to place it horizontally on a measuring device like a Check-it Stik. Carrying a tape and measuring fish while wading isn't hard, but taking the time and effort to go to the boat and measure one flat on its side is normally too time-consuming to be practical and is often harmful to the fish.

Consequently, many modern anglers think of weight first and foremost when generating dream-scale dimensions for their bucket list trout. For most, catching a double digit fish, meaning one weighing ten pounds or more, is the ultimate goal. For those who've already caught a ten or several fish exceeding ten, the bar will likely rise to eleven or twelve pounds, maybe more. A select few will settle for nothing short of the state and/or world record to satisfy their obsession(s).

Most records and tournament standings are in fact determined by weight, not length. To some extent, though, length is a better way to determine the quality of a trout. Specks can vary widely in weight from day to day, week to week, season to season. In cold weather, their metabolism slows down, and the undigested remains of their prey stay in their stomachs longer, so their average weight increases. In hot weather, when the metabolism of the fish is highest, the opposite is true, and the fish become slender and snaky, with flat bellies.

Eggs periodically add weight to female fish too. Specimens full of eggs during the spawning season, which runs from about March through October in South Texas, will hit peak weights just before they dump their eggs. Females spawn regularly during the warm period, repeatedly growing eggs, then dumping them, so all females caught during this time are likely to have some eggs in them, though the amount of eggs and added weight will vary.

The heaviest trout caught will be full of eggs, and will have recently ingested a large meal or meals. Notoriously, trout go on frenzied feeding binges. When they're caught on plugs in the midst of those binges, before they've had the opportunity to digest what they've eaten, they sometimes weigh two or three pounds more than they otherwise would. During times like those, it's not uncommon to catch a trout with the tail of a mullet, croaker or even another trout protruding from its gullet.

Is such a glutton really a better fish? Catching a fish when it's in a hyper-aggressive feeding mode is undeniably easier than catching it when its not; catching a fish full of eggs is purely a matter of chance. In other words, the extra weight of a fish is arguably irrelevant to its status as a trophy. The same old, long fish, caught outside spawning season, with an empty stomach, is essentially every bit as beautiful and significant as when its fattened up.

Others will, of course, disagree. The personalized perception of beauty and the argument over the relative importance of weight and length enhance the mystique and status of trophy fish. According to most trout anglers, trophies measure at least thirty inches and/or weigh ten pounds or more. For the record, most thirty inch trout (at least in South Texas) weigh less than ten pounds.

I've been able to verify the weights of dozens of thirty inch (and longer) trout I and others have caught since we started carrying Boga Grips. The average weight of those fish, including the thirty-ones and thirty-twos, is a shade under nine pounds. All but one of the trout weighing ten pounds or more exceeded thirty-one inches in length.

The fattest of the fish, a thirty inch specimen, did weigh ten pounds even. Contrast that to a thirty-incher which weighed less than seven pounds, and two thirty-one inch fish which weighed under eight pounds. I definitely consider every one of our thirties to be trophy fish, based on my tendency to place more of a premium on length over weight.

In addition to personal preferences and priorities, the choice of angling method can influence one's definition of a trophy. I recall reading about a record-obsessed marlin fisherman who was hell-bent on catching a Grander (1,000 pound specimen) on ten pound test line. He certainly came to define his trophy differently than most big-game anglers, even those who've caught and released many monster marlin.

Similarly, an angler fishing for trout with a fly and a four-pound-test tippet will probably define trophy differently than one fishing with live finfish and a medium-heavy baitcasting outfit. Even the weather and location of the fishing effort can alter one's idea of a trophy. Fishing in difficult conditions and in places where big fish are scarce can make the catch of a six-pounder poignant.

A spotted seatrout is a relatively small fish when compared to others swimming around in the open seas and estuaries, reaching a maximum length around three feet (or slightly more) and rarely exceeding twelve pounds in weight, though specimens measuring in the high teens have been documented. In the end, a trophy fish is whatever an individual deems it to be. For all involved, the interaction with the fish during the time its hooked, fought, caught and strung or released is what really counts.

The rush of adrenalin and feeling of accomplishment associated with the catch of a trophy fish are fleeting, intense and addictive. That's why I say the same thing over and over again while fishing. The truth in the statement never changes. All I need is one more big bite!