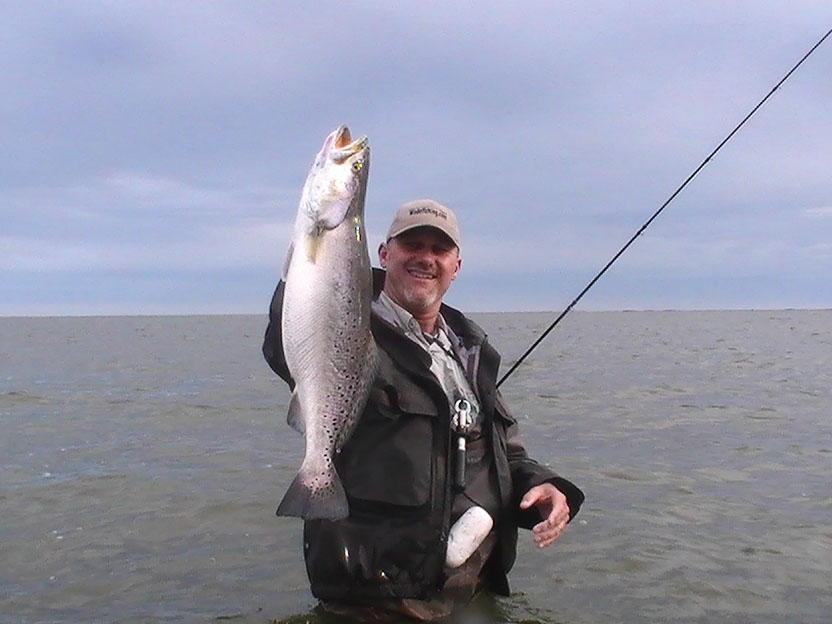 This eight pound specimen, caught in early February 2010, during a prolonged cold weather pattern, looks more like a bass, with her fat, stretched stomach.

I'm often asked about the spawning habits of spotted seatrout (Cynoscion nebulosus) and how these habits affect my fishing strategies. Usually, such a conversation starts with a question like this: "I heard the trout over there have already spawned out. Is that what you're seeing, or do they still have eggs in 'em?" Such a question is based on the premise that trout spawn just once, and that isn't the case. Apparently, many people in the saltwater fishing community have been misinformed about the trout spawn.

In order to document accurate information about speckled trout spawning habits, I researched dozens of studies done on the topic over the last fifty years or so. These studies occurred all over the southern United States, from Georgia around the Gulf Coast to Texas. The methods used to collect data today are more sophisticated than those employed a half a century ago, but all the referenced studies were based on scientific methods of observation and data collection.

In the 21st century, it's possible to observe trout reproducing in captivity, where conditions have been artificially manipulated in an attempt to maximize production of offspring. These observations provide evidence of how certain variables affect the timing and effectiveness of trout spawns, but perhaps the best evidence of the spawning habits of trout comes from the observation of wild fish spawning naturally.

According to all discovered sources, seatrout are "multiple spawners", meaning they spawn more than once during a season. One source cited 3.6 days as the average length of time between successive spawns, but the general consensus places an average length of time between spawns at ten to twelve days, though the most recent studies assert a longer period.

The season for spawning varies in different areas, since it is dependent on salinity level, water temperature and other factors. Colder areas, like those at the northern extremes of the trout's range along the Atlantic coast, have shorter seasons than warmer areas like South Florida and South Texas. In all waters where they are found, trout start spawning by some time in May and continue to do so into at least September, though activity has been documented as early as February and as late as November in warmer locales.

Female trout reach maturity and spawn for the first time when they are approximately ten to twelve inches in length and continue spawning throughout their lives. Smaller trout carry fewer eggs than do large ones, with the smallest producing less than one hundred thousand and the largest capable of producing as many as 1.5 million at a time. Since they spawn "several" times in a year, one female trout can release millions of eggs annually.

Biologists have also determined that the youngest and oldest trout contribute fewer offspring to the overall biomass each year than do the mature females in the middle age categories. This is because younger females, though more numerous than middle aged and old ones, produce fewer eggs each. Old fish produce more eggs each, but they are far less numerous than young fish.

No matter what the age and size of the trout, they spawn in the same places and in the same manner. Spawning activity occurs at night when numerous males make soft drumming noises to attract ready females to an area, then mill around those females, making light side to side body contact as they release their milt into the water and the sows release their roe. This activity can occur in various types of environments, from channels which connect estuaries to the open ocean (where currents are generally strong, effectively dispersing the eggs over a large area) to shallow grassy flats far from the sea. The types of areas chosen vary in accordance with what's available to the fish in a given estuary system. Where possible, it appears trout seem to prefer to spawn around relatively shallow grass beds, which might offer larval offspring some protection from predators.

In no case does an adult trout, either male or female, create a spawning "bed" or stay at the spawning site to protect fertilized eggs or larvae. This "spawn and move on" strategy is common among multiple spawners, which rely on fecundity, through mass production of eggs, rather than on effectively raising a smaller number of live young, as is the case with a once-yearly spawner like a largemouth bass.

In total, the facts related to the spawning habits of speckled trout have minimal impact on fishing for the species. First and foremost, it is basically impossible to target spawning fish, since the spawn goes on throughout the warm months in a variety of places. In bays with small amounts of shallow grass beds, there might be a preference among local trout for those areas from spring through the summer and into early fall. In areas like the Upper Laguna Madre, which is nearly carpeted with grass, targeting spawning areas is like looking for a strand of hay in a haystack.

I would not, nor do I think it's even possible, to plan a fishing effort based on the fish's need to spawn or the timing of the spawn. I do, however, believe that the facts related to trout spawning habits show that killing female fish is more harmful to the fishery than killing male fish. In essence, killing a female fish not only removes one fish from the fishery, it removes thousands of that fish's potential adult offspring from the fishery.

The younger the female, the more potential offspring she has to contribute through future spawns, especially if she were to survive to old age. The older the female, the more eggs she's producing each spawn, though she's likely to have fewer spawns ahead. Killing large females also potentially removes a fish with favorable genetic traits, both in terms of longevity and size, from the gene pool.

This is why I fish with boat rules which significantly reduce the number of trout over twenty two inches that I and my clients kill and keep. By keeping smaller fish (when we keep fish at all), I and my clients are increasing the likelihood that we're killing males (which are generally smaller than females) and ensuring that the females we do kill are smaller ones. We consciously release almost all large females, both to allow those females to produce more offspring, and so that we or others might catch those fish again after they get bigger!

While researching the spawning habits of trout, I found another fact about the fish which I find relevant and interesting. It's clear that the growth rate of a trout is primarily controlled by water temperature. The fish grow fastest in hot water, during July and August, and slowest during the winter months. In fact, when water temperatures get cold enough, growth stops altogether, as metabolism slows to a point where the fish enter a state of extremely limited activity.

This partly explains why South Texas has some of the biggest trout in the world, as we generally have few days per year with water cold enough to stop the growth of the fish. It also explains why we catch so many skinny fish in hot summer months and so many fat ones in winter. The fish eat more in summer, and they're easier to catch, but their metabolism is high and most of the energy they take in is converted to growth. Conversely, in winter, whatever they ingest sits in their stomach undigested for much longer, increasing the likelihood of catching a full, fat fish.

All this leads to the conclusion that the best time of all to catch a long, fat female is at the beginning of the spawning period, when water temps are still cool and the fish have eggs growing in them too. Not that such a statement is really news to any trophy trout enthusiast; we already knew that the month or so surrounding the calendar change from winter to spring is a great time to try and connect with the fish of a lifetime.

Author's note: I'd like to acknowledge TPWD employee Scott Walker, Ph.D., who helped me clarify the concepts in this piece, so I wouldn't inadvertently create new misconceptions about these topics while trying to eliminate existing ones. Thanks Scott!