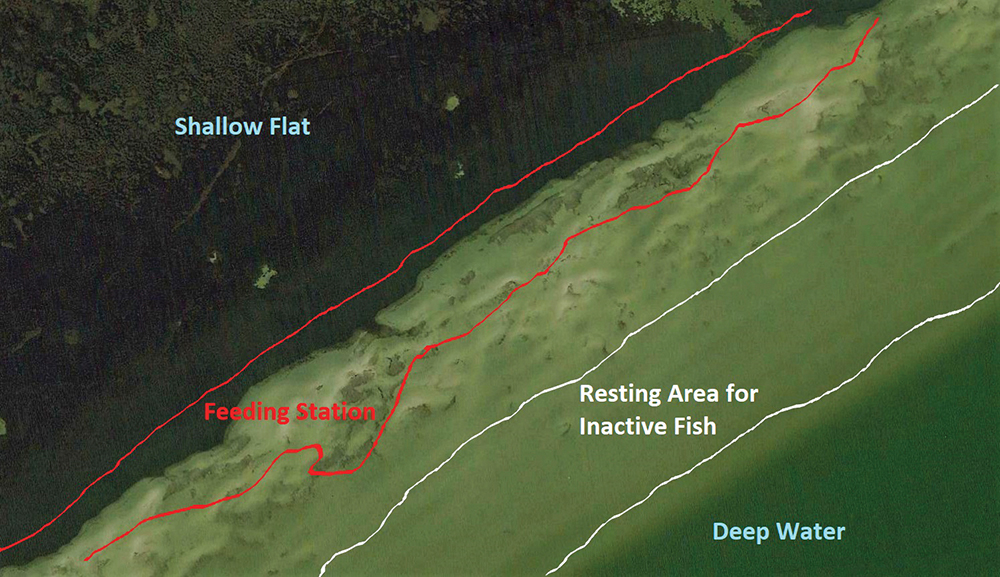 This shows the spine of a large sand bar, with the typical feeding station denoted in red, the typical resting area in white.

Many structural similarities exist between birding and the angling activities which have sustained me professionally for the better part of two decades.  A poignant set of events played out during the 2019 spring bird migration, enlightening and reinforcing several angling concepts for me. The scenario involved a male member of a relatively uncommon species, the Prairie Warbler.

While returning from his wintering grounds in Central America or the Caribbean, the tiny, streaked, yellow and black bird stopped for rest and refreshment in a grove of willow trees in the lawn fronting a condominium complex on Mustang Island. Birders spotted him in the shadows cast by drooping branches and reported the fact on the internet. Within a couple days, I made my way to the site, hoping to scratch the species off my Year List.

The diminutive tangle of trees stands in a shallow bog, no bigger than a typical backyard swimming pool. Walking around the perimeter of the thicket takes no more than a few minutes, even if one creeps slowly, watching for movement in the interior all the while. I practiced due diligence on my first attempt at the spot, but saw no birds, so I headed down the road to Port Aransas to sites with more spacious habitat.

While walking around in town, I encountered two groups of people who had seen the Prairie Warbler in the willows earlier the same day. Disgusted with my bad luck, I made plans to stop by the site on my way home, knowing the warbler likely still lurked somewhere in the shadows. By the time I arrived, I felt tired from walking around looking up all day, so I parked the truck where I could easily see into the center of the grove, scanning for movement for several minutes before giving up again.

Later, looking at reports on the internet, it seemed everybody in the local birding community had gotten a look at the little critter, except me. The next morning, I went to the condominium again and parked beside the key group of trees. While raindrops gently pelted the puddle which sustains the willows, I began to see warblers moving in the grass and low limbs, just over the water.

I counted five other species, but still had not spotted the Prairie Warbler, for at least an hour.  Determined not to leave without a sighting, I pulled the truck forward a few feet, so I could see the south end of the canopy, formed by the leaves of a Brazilian Pepper tree. After just a few minutes, I saw the quest bird hop out of the foliage, light briefly on the grass, grab a bug in its bill, then wheel around and fly immediately back into cover, behind weeping leaves. Though continuing rain discouraged me from getting out to take a closer look,  I felt relieved to add the species to my list.

Early the next morning, crisp air under bright skies adorned the Texas coast, and I made another stop at the condominium on my way to Port Aransas. Not long after I stepped out of the truck, the male Prairie Warbler jumped right out in the open and began eating tiny insects off the backs of leaves, less than twenty feet from me. I pointed the bird out to two other folks standing close by, and we all began watching him.

He moved closer to the ground, gorging on bugs the entire time. “Come down on the grass and pose,” I said, readying my camcorder to shoot video. Amazingly, seconds later, the hungry warbler did land on the grass, hopping closer to our feet. Then, to ice the cake, he suddenly flew forward, circled behind me, inches from my ankles, then plopped down again on the grass in front of us.

We cheered and laughed at the bird's antics. I shot some video while the migrant continuing taking in fuel to sustain him for the remainder of his journey. Once his appetite waned, he flew over our heads and dived deep into a stand of gigantic Oleander bushes maybe fifty yards from the grove of willows, disappearing instantly, and the nature of the scenario became crystal clear to me.

The bird was easy to see while it was eating, sometimes coming out in the open. Its appetite made it less cautious, almost oblivious to other things. But when he finished a meal, the warbler instantly sought the safety of thick cover, to rest out of sight of other birds, predators and people. Any person searching for him at the feeding stations during such a time would have no chance of finding him.  All these incidents and facts reinforce several angling concepts for me.

Most importantly, the fact I saw the bird while it engaged in the act of feeding reminds me of a basic angling truth. A fish's appetite level profoundly affects an angler's ability to catch it. A hungry fish certainly behaves in ways which make it easier to trick into taking artificial lures. A fish with no appetite always proves more difficult to catch, and locating it often requires casting in places where it generally does not feed.

These facts lead to a separate, related conclusion. Timing an angling outing to coincide with a high likelihood of encountering actively feeding fish increases the likelihood of catching fish, in the same way timing a birding outing to coincide with predicted feeding activity increases the likelihood of finding a bird. Anglers trying to determine what factors will likely create a high level of appetite in fish face a more complex dilemma than birders attempting to do the same thing.

Generally, birds feed either diurnally or nocturnally, showing a high level of feeding activity  in the early parts of the day or night, then again in the later portions of either time-frame, after filling up and taking a rest. Surely, predatory birds feed much differently than those eating seeds, berries or other plant material. Migrating birds behave differently than birds which stay in the same places year-round, and weather phenomena affect the timing of feeding cycles on a temporary, local basis.

These factors also play roles in the feeding cycles of fish, with higher levels of complexity. On average, predatory fish do feed somewhat vigorously during both light changes, meaning around dawn and dusk, but seasonal and other environmental factors impact the level of activity on a daily basis, and the locations where the feeding likely takes place. For instance, in the shallow, clear water fronting the shorelines of the King Ranch, an angler will more likely encounter ravenously feeding trout at dusk in December, while the hours around dawn produce better results in the same places in April.

Similarly, hungry trout will show up reliably atop the shallow crowns of sand bars lying adjacent to deep channels and basins at the end of a warm winter afternoon, but in summer, those same places will likely attract actively feeding fish at the end of a short, relatively cool night and into the early hours of morning. In addition to seasonal, temperature influences, celestial factors dramatically affect when fish generally feed most actively. Consequently, in places with ample tide movements, understanding how moving water affects the timing of the “bite” bears great significance.

Tidal movements dictate more than the timing of the bite; they also dictate where fish feed most actively. Saltwater moving over structural elements creates places conducive for predators to catch their prey. So, anglers must not only pay attention to how tide cycles affect the timing of the bite, but also how the cycles create sweet spots in the area, to maximize productivity.

In places where tides don't move much on a daily basis, the position of the moon in the sky bears more significance. Fish tend to bite best when the moon hovers close to the horizon, while it stands high overhead or when it sinks straight underfoot. Focusing an effort in known “feeding zones” during times of peak predicted appetite enhances productivity in hypersaline lagoons, where tides roll feebly.

Conversely, focusing efforts in those same places during lulls in feeding activity can make little or no sense. Much in the same way a Prairie Warbler dives deep into thick cover to rest between feeding forays, inactive trout or redfish sometimes move away from a feeding station when not actively feeding. Observing trout in canals with submerged lights verifies this.

Feeding fish move around erratically, repeatedly darting into the brightest part of the light's orb to grab meals.  Inactive fish listlessly circle around the edge of the lit area, never venturing into its center. These nocturnal feeders likely sit on the bottom some distance away from the light during daytime, especially in winter.

In other places, this plays out differently. Adjacent to a jetty, fish likely move away from the ripple beside the prime rock after feeding, suspending and/or circling in open water nearby, while on an inshore reef, inactive fish might move away from the shallow concentrations of shell, sitting dormant on a mud bottom in water of greater depth.

In either case, an angler hoping to induce an inactive fish to open its mouth and take a bite must place a lure close in front of its face. This won't happen if all casts land within the boundary of the nearby feeding station. During the lull, making repeated casts and presenting a lure low in the water column in a gut lying adjacent to a reef or over a patch of sandy bottom between a set of rocks will more likely produce a strike from an inactive fish than tossing a topwater over the shallowest concentration of shell or right at a rock.

Sometimes, non-feeding fish will stay in the same areas where they eat. On expansive, shallow flats, sated pods of trout sometimes swim steadily in slow “figure eights”, occasionally passing through the pothole systems where they feed, without seeming to notice members of their prey species within their reach.

Anglers hoping to urge strikes from inactive fish in places like these generally need to change tactics by altering lure choice and/or presentation style. Certainly, many casts might be required to induce a few bites, much in the same way a birder trying to find a stationary warbler among the intertwined branches and leaves of a monstrous oleander needs to display supreme focus and persistence.

Both birding and fishing require patience and perseverance from people hoping to optimize results. Ironically, intelligence of a specific kind can reduce the need for those attributes.  Thinking ahead and attempting to accurately predict the feeding mood of the pursued creature, then planning the trip to coincide with strong appetite aids the quest for productivity, as does adjusting strategy and/or location when the appetite level of the sought creature diminishes significantly.