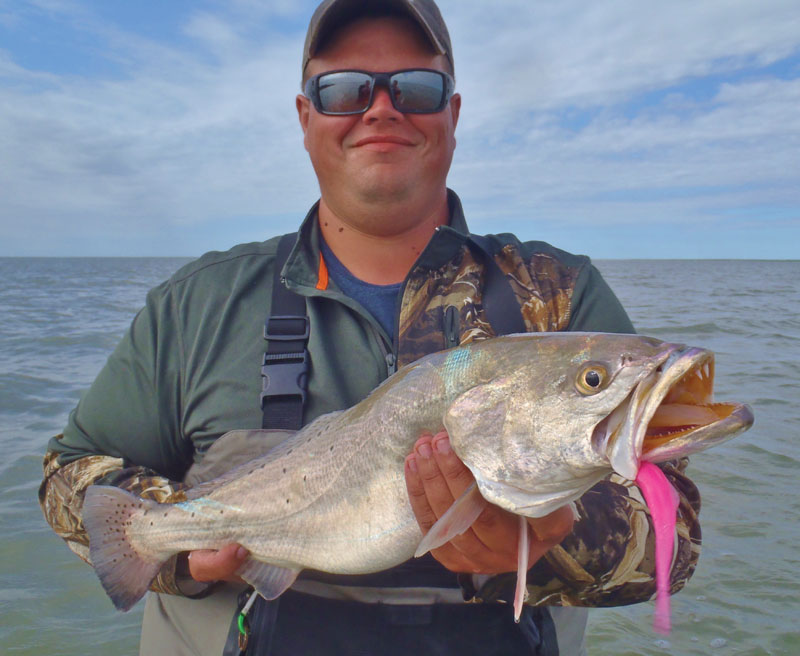 Matthew Eckstrom caught this solid trout by repeatedly casting a soft plastic along the edge of a sand bar after a vigorous bite dwindled.

Collecting and evaluating data enhances any angler's potential for growth. For over thirteen years, I kept a detailed fishing log, documenting all kinds of information, and I know the process helped formulate my skill sets fully. I've recommended using a log to many anglers since I learned this valuable lesson. Though I no longer stockpile the same type of data on a trip by trip basis, I still find reflecting on past events useful and meaningful.

The calendar moving from one year to the next provides a perfect time for such reflection and evaluation. Several events unfolded in 2015 to reinforce truths on which I rely during my daily forays. Some of these things happened to me personally, while I learned about others from people with whom I communicate on a regular basis. All of them bear mentioning, as they carry important implications for anglers hoping to enhance the productivity of their outings.

That's the goal for most of us, obviously, to do more catching and less fishing. To that end, we wind up paying attention to the activities of others around us. I learned long ago, and have written since, "A bunch of boats staying in an area for days at a time means something." Back around the turn of the century, when I fished more than forty consecutive Troutmasters tournaments, I found out the hard way about the critical implications of this truth.

I remember my old partner Ari Schwartz and I deciding to fish West Matagorda Bay in a tournament which also allowed East Matagorda. "Too crowded over on the east side," we decided. "We'll get our big trout by heading west and avoiding the people." Of course, we did not. The winning sacks all came from East Bay that weekend.

We did learn from our mistake though, and wound up fishing in a virtual armada of boats off Green's Cut in a Galveston tourney not too many months later. We had tried diligently and repeatedly to make the wading work in various parts of the bay system, with little or no luck at all. Though we didn't normally like to fish by drifting, we realized nearly all of the other contestants had made the choice to work the deeper waters of the open basin of West Galveston Bay, so we joined them and experienced respectable results.

"There's a reason all these good fishermen are out here," Ari correctly pointed out. When lots of fish pile up in an area and stay there for a while, some of the best anglers usually find them. People interested in enhancing their own consistency can hedge the bet by paying attention to where they find concentrations of boats. While doing so, they should certainly remain respectful of the rights of others, by not getting too close to them, cutting off their drifts, whatever rules of etiquette apply in the specific situation.

I am not advocating the idea that people should go out "searching" for other boats, or that they should always stop and stare every time they see bent rods in a group of waders. No activity of this kind should be used to supplant a thoughtful, analytical approach, based on the season, weather and other variables. I'm suggesting something far more general. Anglers gathering in an area over an extended time usually indicates the presence of fish in that area. Predictably, my observations last year verified this truth.

I and others had been catching some pretty big fish in Baffin during December and January. Sometime early in February, the catching became tougher, and I noticed the crowds had thinned out around me. Eventually, while running back to Bird Island, I discovered why. Boats lined up along a stretch of shoreline in the Laguna Madre provided the clue. Over a period of days, I noticed most of them staying put all day every day. Since I had stopped catching further south, and because I would naturally have done so anyway, I moved north and started working the same general area, and my results improved.

I did not rush right up and squeeze in among the anglers already working the stretch of shoreline. I started out by looking for fish in areas well away from them on the same shoreline, ones I knew usually hold fish during the time-frame on an annual basis. This brings up a second major truth which the events of 2015 reinforced: "Some parts of a shoreline are better than others."

I learned this years ago, while fishing with other experienced anglers as part of my Troutmasters schedule. In several different bay systems, we identified short stretches of water adjacent to long shorelines which consistently held more fish than others. Two or three good catches in a spot might not mean much long-term, but if better catching happens on a consistent basis, from year to year, one might correctly assume some factor or factors create a "sweet spot," surrounded by less-productive water. In some cases, it's possible to identify the likely reasons the sweet spot holds fish more often than adjacent stretches, but in other cases, the reasons remain a mystery.

I've seen this truth illuminated many times since moving to Corpus Christi and fishing the ULM and Baffin Bay on a regular basis. In 2010, for instance, a school of big trout stayed put in one short stretch of a shoreline in the Lagoon for at least ten weeks, producing numerous big catches for several people I know. Anglers earned multiple tournament wins in the spot, while areas close by produced few fish at all. Significantly, many local anglers have familiarity with that sweet spot, which has produced better than average catching for over a decade.

Several coinciding environmental factors likely contribute to the prolonged productivity of the stretch–a large mat of rotting grass lies on the shoreline, with sandy potholes scattered in the grass adjacent to it, while a rock-studded ledge creates a subtle drop-off from the shallows to the deeper waters farther from shore. Consequently, the spot fits some aspects of my basic definition of a consistently productive spot, because it has multiple cover elements on the bottom, and deep water close to shallow water. It does not lie close to a main bay point, but does prove relatively impervious to the effects of predominate winds.

In other cases, I've known of cases where stretches consistently produced big catches but don't have easily-identifiable features which likely create the consistency. In 2015, a partner of mine spotted a large school of trout while running through one such stretch, and returned to catch sows over six pounds there numerous times over the next few months, in extremely diverse conditions, with regard to water temperature, wind direction and tide level. Sometimes, a school of fish seems stubbornly reluctant to leave a small area; anglers who locate such a school can benefit from returning to the spot regularly, without much consideration of the weather and other factors.

However, changes in tide level will cause some areas to produce better than others, particularly in shallow, hypersaline lagoons, where a foot of change in tide level can render some places void of fish, while concentrating the mother lode in other spots. I caught several monster trout in just such a situation in late-March, early-April of 2015, when a freakishly low tide occurred in my home waters.

As often happens, the biggest trout we caught during the short run came from the shallowest "usable" parts of the area. That truth proves reliable time and time again, and relates to another significant tenet–anglers who most consistently catch trophy trout target their fish shallower than most other anglers most of the time. In the specific case I mentioned above, a vast, shallower area with a bottom covered almost uniformly by dark grass beds lies close to the area where I and my clients found our fish on the super-low tide. I suspect the fish we caught normally live on the expansive flat, likely roaming around in water too shallow to access and target effectively. When tides receded enough to render their home haunts high and dry, the fish retreated to the fringe of the flat, positioning them right in our wheelhouse!

Strong winds coincided with (and helped create) the extreme tidal ebb, making it difficult indeed to catch the big trout concentrated around the margins of the gigantic flat. Most of the ones we caught bit soft plastics dangled under corks. The efficacy of the "cork and jig" has proven itself to me repeatedly, especially when nasty weather conditions contribute to create a tough bite.

One of the best anglers I know confronted me with the strength of this truth years ago, during a Troutmasters tournament. Strong north winds and cold air made the catching difficult on the day in question. I had no bites on floating plugs and slow-sinking twitch baits while watching him catch several solid trout on worms trailing in the wakes of corks spraying foam up into the breeze. I wound up trying the tactic myself and hooked a big fish too.

Since that time, I've pulled out Styrofoam floats and attached them to my line above worms many times, often with astounding results. The technique can make catching easy on days when other lures go virtually untouched by all the fish within reach. In 2015, I caught my first thirty-inch specimen on the cork and jig, followed by my first ten pounder, all within a couple hours, on the same wading session! Those results definitely elevate the status of the technique for me, though I find using it somewhat tedious generally.

The trophy fish I and my clients landed in the shallows last spring in a spot holding barely enough water to cover their backs disappeared when tides returned to a normal level. While we had our shots at them, nearly no other boats came within miles of us. Catching some memorable fish far from the madding crowd normally proves more satisfying than catching them in the midst of a bunch of boats, most would say.

But paying attention to where crowds gather on the water can certainly lead to productive catching too. Locating stretches of shorelines where fish congregate on a daily basis also enhances productivity. Monitoring tide levels and adjusting the location of sustained efforts can make the difference between catching and smelling a skunk, as can dangling a worm under a float, especially when conditions conspire to frustrate efforts with other plugs.