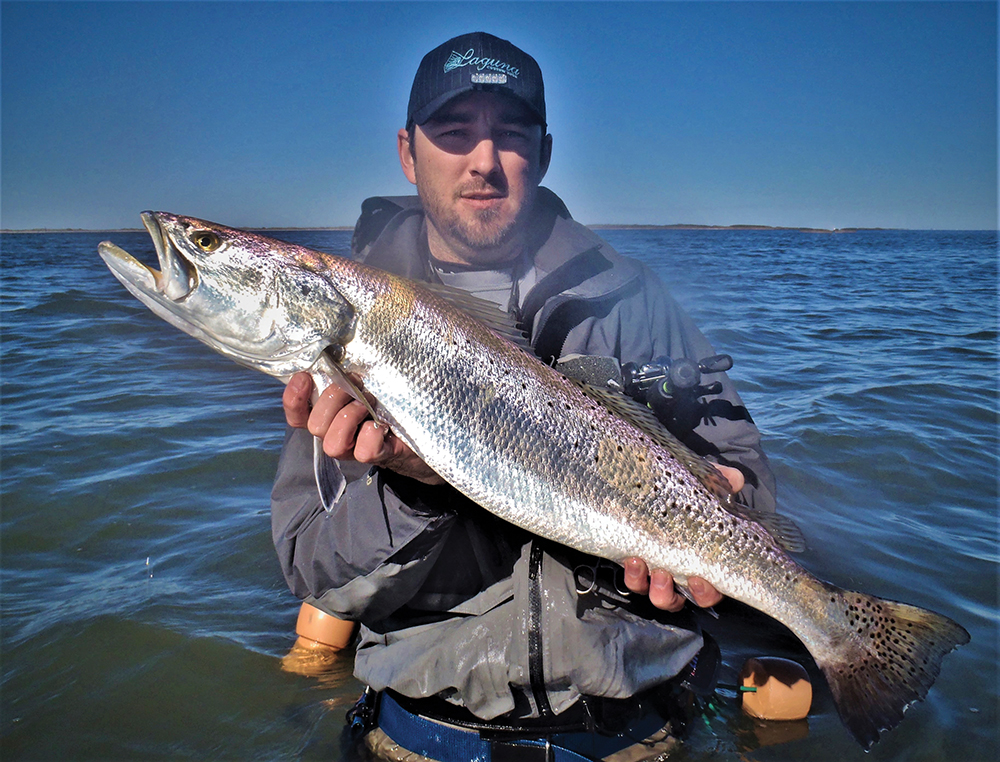 This 32-inch trout bit for Caleb McCumber soon after harsh post-front winds first diminished during the middle of a January day in Baffin Bay.

In Texas' coldest month of the year, two basic patterns emerge which offer the best potential for catching numbers of big trout. One of these applies better on the Upper Coast, where shoreline coves provide a specific kind of niche habitat; the other works better on the Lower Coast, where north and west shorelines lie close to deep basins. In both these potentially productive scenarios, timing plays a key role, in multiple ways.

On the Upper Coast and to some extent in the Coastal Bend, in bays like West Galveston, both Matagordas, Espiritu Santo and San Antonio, numerous shallow coves and lakes adorn the shorelines lying on their southern sides. Strong north and northwest winds blow the water out of these coves and the fronts which spur them cause water temperatures to plummet.  During the days immediately following the tide falling, the coves in bays like these become nearly barren, virtually void of life.

But once the weather takes a turn, tides and water temperatures typically rise again. If a warm spell lasts for three, four or five days, these shallow nooks and crannies often fill to the brim with water and numbers of prey species on which mature speckled trout depend. For a day or two, this creates ripe opportunity for catching some of the biggest trout in these bays, as they come out of the basins to hunt in these shallow areas. On the Lower Coast, the most productive January pattern does not depend upon such a prolonged warming trend.

In both Laguna Madres and in Baffin Bay, a slight upward tick in the weather after a dramatic cold snap often provides the richest opportunity for encounters with numbers of jumbo trout.  If and when the Mercury in the thermometer falls low enough to drive water temperatures down to 53° or below, this scenario comes into play. Normally, during such an event, strong north and northwest winds whistle over the bays. While the noise reaches a crescendo, usually for a couple of days, catching fish can prove exceedingly difficult. But, as soon as conditions moderate slightly, winds decline to 15 mph or lower and water temperatures stop falling, numbers of big trout often feed voraciously for a while.

Anglers then sometimes catch ten or more trout averaging six or even seven pounds or more, normally by targeting them in shallow areas along west and north shorelines which lie close to deep basins where the trout gather when water temperatures plummet. Sometimes, the fish show up right on the shoreline, especially in the Laguna Madres; in other places, they appear around the edges of structural elements lying farther offshore, like at Cathead, East Kleberg Point and the Tide Gauge Bar, in Baffin Bay.

Typically, down south, a slight upturn in the weather which occurs on a bright sunny day elevates the likelihood that the best bite will occur during dusk and soon after night falls. This truth rings loudest in the Laguna Madres, where the water often looks like distilled spirits during winter. Clear water causes big trout, which prefer eating other fish, to become more active during low light conditions, when their prey cannot see them easily. In Baffin Bay, where the water often has some kind of turbidity or stain related to algae blooms, the timing of the peak of the bite depends less on the fall of night. Many times, when a cold snap moderates slightly, a vigorous bite develops in the middle of the day and continues into the afternoon hours in this famous, rock-studded bay.

The same generic truth applies in Upper Coast coves after a warming trend fills them with tepid water and attracts trout and their prey into their midst. On many occasions, the best January scenario for catching big trout in places like these happens in the middle of the afternoon, while a bright sun causes water temperatures to climb, and moderate to strong onshore breezes blow over the coast. The bite can certainly linger into dusk, sometimes stretching into the early parts of the night.

Of course, the timing of tidal movements plays a key role on the Upper Coast of Texas, where daily tide cycles often cause the water to move up and down over a fairly long range. A strong incoming tide during the afternoon hours, especially if it peaks and turns quickly to move out, enhances the potential productivity of the pattern which favors catching big trout in the south shoreline coves of Upper Coast Bays this month. If a new front blows in at approximately the same time this happens, the fish sometimes chew with a seemingly reckless abandon for an hour or two.

On the Lower Coast, where tidal movements generally exert little or no effect on the timing of the bite, the rising or setting of either a new or full moon during the peak time frame for the bite will enhance the potential significantly. This truth plays the biggest role in super clear water, since full and new moons tend to rise and set in the hours closest to dusk. Certainly, a full moon rising soon after sunset on the day when water temperatures first begin to moderate after a big chill can pull trout to the shorelines with their jaws snapping, as surely as incandescent lights attract mosquitoes on a summer night.

Savvy anglers try to place themselves in the right places when conditions like these appear imminent. They also follow a set of basic procedures leading into the key moments when the variables align themselves attractively. When fishing the mid-afternoon pattern with warm weather and sultry winds on the Upper Coast, finding a dense concentration of bait, primarily meaning mullet, often leads one to the right nook or cranny.

Warm January weather and rising tides often send many mullet into the shallows. Given moderate temperatures, these fish often show themselves quite readily at the surface. And, they jump around vigorously when alarmed by the presence of active predators in their midst.  Consequently, one would prefer to see lots of active, airborne bait in a cove before spending much time trying to coax a big trout to bite.

Experienced lure-chunkers also know active mullet flying out of the water often indicates ripe potential for catching trout on floating plugs, especially when water temperatures rise to 65° or more. Full-sized lures like Super Spooks make good sense, given the typical size of mullet found in the bays this time of year. When bait signs indicate a high likelihood of some kind of large predators lurking within casting range, anglers should expect something positive to happen in a relatively short period of time. Standing and grinding in this situation doesn't make a whole lot of sense, unless many of the similar spots down the shoreline already have anglers working in them.

Given lighter crowds, which often prevail in the dead of winter, moving around if the bites don't come fairly easily probably makes more sense. In addition to adjustments to location, switching “down” to slow-sinking twitchbaits might certainly change the outcome. Big trout sometimes prefer these over conventional cigar-shaped floating plugs, even when lots of jumping bait indicates they might blow up regularly.

Certainly, anglers fishing the other scenario, when frigid weather first takes an upward turn on the Lower Coast, stand ready to deploy slow-sinking twitch baits. Much of the time, these finfish imitators work best to urge strikes from hungry mature trout when water temperatures descend below 60°.  Because water temperatures in the mid to low-50s elevate the potential for this pattern to produce best, anglers can expect to see less active bait around the surface when attempting to assess the likelihood of the presence of feeding trout around them. Still, making a slow run down a shoreline facing a deep basin, one protected from the effects of strong north winds, and looking for mullet tight to the bank makes sense.

This truth applies strongly when anglers make efforts in crystal clear water, expecting the fall of night and/or some other celestial event to stimulate a vigorous bite. Rather than getting out and making a bunch of empty casts in the last two hours of daylight, looking for concentrations of bait often pays more dividends. Given light crowds, anglers sometimes have the opportunity to try two or three tasty looking stretches within a relatively short period of time, right as darkness falls and shortly thereafter. As in the other situation, waiting a long time for bites to come doesn't really make much sense, but deploying soft plastic paddletails in addition to slow-sinking twitchbaits does. Even actively feeding trout often prefer the worm over all other lures in water temperatures stuck in the low- to mid-50s.

Whether deploying dark twitch baits or soft plastics on light jigheads in the gloaming in a scenario like this, anglers should work them low and slow overall, but with enough action to activate the rattles in the twitchbaits and the paddles on the tails of the soft plastics. In the dark, predatory fish like speckled trout find their food by sensing movements with their lateral lines more so than by sight. The darker the darkness, the more this fact exerts influence on the ability of an angler to catch the prowling trout.

Profound darkness affects anglers in predictable ways too. Experience helps people cope with the loss of sight. Before attempting to fish through the sunset and into the black pit of night, one should become as familiar as possible with the layout of the area. This increases the chances of making casts into the parts of the place most likely to hold feeding trout of magnum size, and reduces dangers associated with wading at night. As does setting up the GPS with track lines and other marks, and keeping a bright light on the rail of the boat's helm, ready to illuminate the path ahead, to minimize the risks of safely navigating back to harbor when the action falls quiet.

Offer of Free Book: This video describes a special offer for all TSFMag readers. View to learn details.
https://youtu.be/42S4roA9UHQ