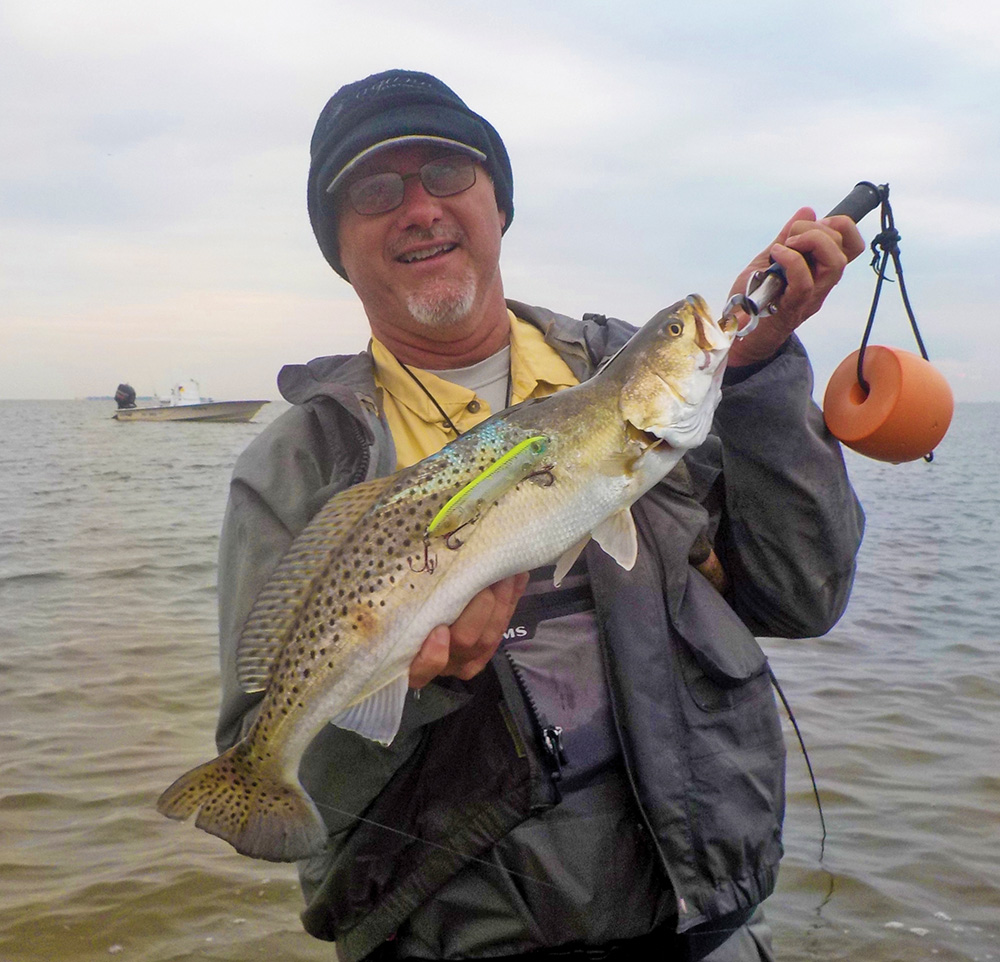 Any fish hooked on the side of the body like this trout will feel strange and strong to the angler who snags it.

Spotted seatrout and red drum often share space in the same parts of Texas estuaries.Any angler with more than a few trips under the belt knows this. Many of these same people believe they can tell which of the two species they've hooked once a fight begins. In my experience, making this determination can prove difficult at best; sometimes, we just can't tell a trout from a redfish until we see the specimen.

Sure, sometimes the call comes easy, when the fish jumps out of the water, revealing its shape and colors, or when the revolutions of the reel easily skim a dink trout across the surface. We don't confuse small trout with redfish, since they can't pull with the same strength as the bronze bullies of the flats. The mystery starts when we hook a fish possessing more strength than any small trout could.

Trophy trout enthusiasts like me regularly hook redfish instead of the desired specimen.In some situations, intelligently targeting large trout requires one to fish in places where redfish outnumber them significantly. On knee-deep, muddy, grassy flats in late-winter and early-spring, for instance, mature trout and upper-slot redfish often gather in close proximity to one another. In such cases, culling through numbers of the copper-colored drum can increase the odds of hooking one of the dappled, silver objects of our obsession.

Savvy trout hunters play all the heavy fish they hook with careful deliberation, until they can verify the species, knowing such a plan increases their odds of safely landing a monster trout, assuming they share one important belief with me. Putting too much pressure on the fish in an effort to shorten the fight increases the odds of an outcome which won't allow the angler to land the fish, determine the species and take accurate measurements and documentary photos. Particularly when fishing with artificial lures carrying multiple treble hooks, fighting a trophy trout too aggressively generally causes the fish to react by pulling harder and shaking its head more vigorously, sometimes resulting in freeing itself from the hooks.

On the other hand, once a trophy trout enthusiast can verify the identity of the fish as undesired by-catch, which many of us perceive red drum to be, at least when we're on a trophy trout mission, we want to reduce the length of time we're entangled with the specimen, so we can return to our quest. This relates to the absolute truth I recently elaborated in the pages of this magazine—you can't catch one fish while fighting another. Trophy trout anglers know this and want to rid themselves of the pesky reds they hook.

Let me acknowledge a few facts related to the differences in the ways speckled trout and redfish bite and fight. I know subtle differences do exist. Having caught many members of both species, I have direct knowledge of these details.

Depending on the type of lure deployed, trout and redfish do generally strike in different ways. Most likely, this relates to the anatomical design of the fish. While both species find their prey through multiple means, including sight, smell and the detection of motion and vibrations, they are not built in exactly the same way. A trout has a bigger mouth, set on the center line of its body's horizontal axis, whereas a redfish's smaller mouth rides below its body's center line.

The consequence of this fact as it relates to the way the fish strike becomes most apparent when anglers use floating plugs to target them. In order for a redfish to take a topwater in its mouth, it must rise out of the water to strike. This can allow the angler to see what they've hooked from the moment of the onset of the fight. Trout can and will make a noisy splash when they take topwaters too, but sometimes they just pull them under without much of a fuss. The big ones do this more often than the little ones, probably because they have wider mouths which allow them to do so more easily.

Because of these basic differences in the attack modes used by trout and redfish, figuring out which species has taken a topwater can prove simple at times. When the lure deployed does not ride on the surface, making the same determination usually becomes much more difficult, though the two species do normally strike in perceptibly different ways.

In my experience, most of the time a redfish strikes a sub-surface lure, I feel two or more taps, rather than just one. Most of the time, I feel just one thump when a trout snaps at such a plug. Additionally, redfish tend to strike while on the move more often, causing the tip of the rod to move laterally when they do. Trout, especially large ones, more often take a lure by flaring their gills and sucking it in with a whoosh, causing the angler to feel just a gentle tap, or nothing at all.

So, most of the time, experienced anglers have evidence on which to base their assumption about which type of fish has taken a bite, given these general differences in the ways they tend to strike. But these generalizations don't always apply. Surely, a redfish can strike and cause just a single tap, and either species can take a lure into its mouth without causing a perceptible tap of any kind.

Significantly, the position of the fish related to the lure affects the way it strikes. The strike of a fish sitting still and sucking in a lure which passes slowly in front of its nose will feel much different than one made by a fish moving quickly away from the angler on the take. This truth applies regardless of the species, so a person needs evidence beyond the feel of the strike in order to determine which kind of fish they fight.

Trout and reds do fight in subtly different ways, of course. Generally, specks tend to stay higher in the water column, breaking the surface more often. They usually pull with less consistent effort, almost gliding at times, then making sudden, extreme bursts while shaking their heads deliberately. Reds, on the other hand, usually stay lower in the water, pulling more consistently, often to the side, in a wide circle.

Most anglers who've caught plenty of trout and redfish have awareness of these facts.A higher percentage have specific knowledge related to the normal habits of hooked redfish, as compared with those of a whopper trout. Anyone with little or no experience fighting trout exceeding five or six pounds might prematurely assume any supremely strong fish “has to be a red, because it's pulling too hard to be a trout.” I've heard my customers utter these words many times, sometimes when they assign the wrong identity to the fish they've hooked.

In the end, the way a fish fights relates to the way it becomes attached to the hook(s).Any fish hooked inside the mouth becomes more likely to rise and shake its head above the surface. This can cause a redfish to throw a white ball of foam skyward and look like a trout, confusing the angler on the other end of the line. Even if it doesn't shake its head above water, a red hooked in the throat or gill often shakes its head in response to the irritant, the same way a trout will.

Conversely, a trout hooked outside the mouth can pull sideways, even downward and sideways, much like a redfish. This happens often when plugs carrying multiple treble hooks become buried in the cheek and/or pectoral fin of a trout. In such cases, an angler can easily mistake a big trout for a redfish, given the fact the fish usually fights lower in the water column, while pulling sideways in a wide arc, with considerable strength.

One of the best trout of my career did just that. Though I hooked it in knee-deep water, it never showed itself on the surface until I had it within a few feet of me, a full five or more minutes into the fight. The fish kept stubbornly pulling sideways, circling around me several times. And it struck with violent motion, obviously swimming through the lure in a mobile attack, like redfish regularly do. In fact, throughout the battle, I assumed I'd hooked a red, but I knew if the fish turned out to be a trout, it would possess epic dimensions. To date, she's the only trout under thirty-one inches I've ever caught which weighed ten pounds.

That ridiculously fat trout pulled the way she did because of the way the hooks buried under her chin and in the side of her face. If I had jumped to an incorrect conclusion and put too much pressure on her, I might have incited her ire and ignited a fight which would have caused the hooks to pull out. Luckily for me, I played with patience that day, so I did not act on my false assumption.

It tickles and satisfies me when a big ol’ fish I think is a “nasty carp” morphs into the trout of my dreams. Sometimes I say a bad word when things evolve in the opposite direction, which they often do. Like most anglers with ample experience, I've been fooled by members of both species more times than I care to admit.

Sometimes, when we hook a big trout, we think we're in a fight with a redfish. Other times, when we hook a red, we think we've hooked a mighty fine trout. No matter how many times these things happen, no matter how aware we become of the subtle differences in the ways the two species generally strike and fight, we can't always tell which is which. Consequently, we should fight all the strong fish we hook with cautious deliberation until we can see them.