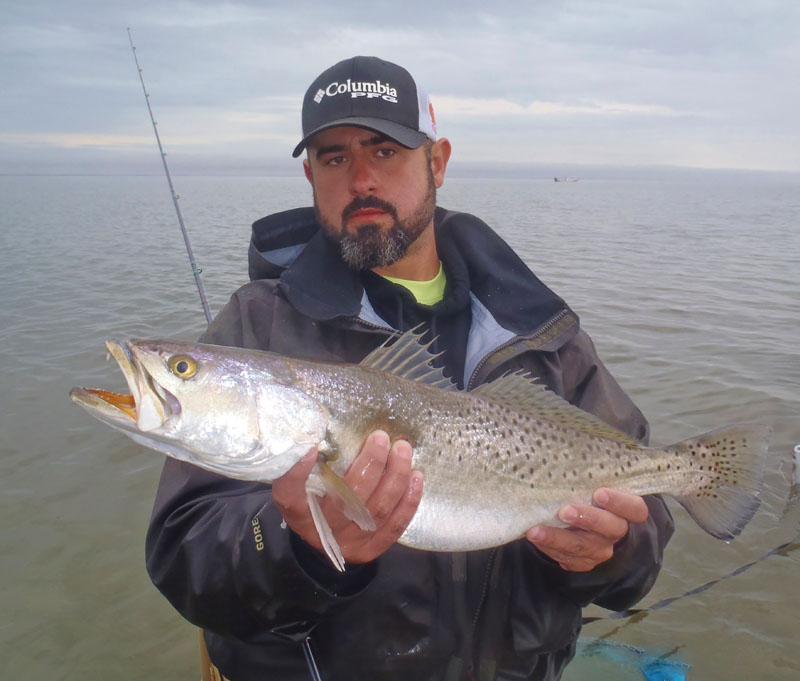 Reid Reynolds caught this pretty trout and released it. Fish in this class can grow to be true trophies in just a few years.

Undeniably, advances in technology and fisheries management have made our angling lives easier and better over time. Compared with the golden days of yesteryear, we have many more amazingly effective tools available to us, and our bays are safer to access and use productively as a result. Mostly, we have benefited greatly from inventions and from the changes made to the laws related to the resources found in our coastal bays and waterways.

Incredibly accurate GPS navigating systems pinpoint our location at all times, motors start and run more dependably than ever, hydraulic anchoring systems stop and hold the boat in place with the mere push of a button, images reveal the structures lying on the bay floors in digital form, rods and reels weigh less together than each did separately a decade ago–all these things enhance the quality and productivity of our experiences. Additionally, the continued, longstanding efforts of the hatchery programs and more conservative limits have allowed for better sustainability of our coastal resources. Texas Parks and Wildlife has made several significant changes to regulations related to speckled trout and flounder over the last few years, in an attempt to ensure future generations of citizens in the Lone Star State will have a healthy fishery.

Certainly, many positive changes have come our way in the decades since I started splashing salty stains on my nylon wading shirts and backing boat trailers down slippery ramps from the Louisiana shoreline to the Lower Laguna Madre. Predictably, more people than ever fish the coastal waters today, and they venture ever farther from the dock when they do. Some aspects of the increased participation prove positive, while others create potentially negative results.

When I started learning to fish the bays, I used paper maps to study as much as I could about the waterways, and a compass and Q-beam served as my primary aids to navigation. Today, incredibly detailed digital images have largely replaced the maps, and some show the bottom of the bays with striking detail. Furthermore, we benefit from the use of GPS when navigating, making it possible to enter into the most hazardous areas safely, time and time again, in darkness, even fog. These things were not possible years ago. Consequently, fewer people made it to some places, particularly when certain kinds of weather made navigation difficult or impossible.

Now, we have a whole generation of anglers who learned to drive their boats with a GPS screen lighting up the helm, and many of them zip along at much higher speeds than older captains thought necessary or even possible. While the accuracy of the GPS undoubtedly makes things safer in many ways, becoming too reliant on the system can create complacency and cause captains to develop bad habits. Some people keep their eyes inappropriately glued to the GPS screen, without regularly looking forward to verify the presence or absence of potential hazards lying in their intended paths. I've witnessed and heard stories of crashes which occurred specifically because of this terrifying trend.

Regardless of how reliable and detailed our GPS systems get, they cannot in and of themselves render our travels over the bays safe. Vigilance on the part of captains will always be a necessary component in the quest for safety. Part of that vigilance involves checking available weather-monitoring systems before embarking on a trip onto the coastal waterways. In recent times, the General Land Office funded the implementation of a website which provided useful data to all who utilize the bays.

The TCOON Buoy System has data gathering devices in place up and down the coast. These instruments record wind speed and direction, barometric pressure level, tide level, water temperature and other things. In a shallow, hypersaline lagoon like the Laguna Madre, knowing the water temperature and specific tide level helps one plan safe and effective outings. Looking at a chart of wind speeds and directions over the last twenty four hours in a prospective area can help one plan trips more efficiently too.

Unfortunately, though this system became popular and consistently utilized by many anglers, both amateur and pro, the General Land Office stopped funding it at the end of August, 2014. As of the time I submitted this piece, the original websites provided no data. I and others have contacted the GLO to stress how much we value and use the information provided on the sites, encouraging them to figure out a way to fund them and get them up and running again.

While I worked on this article, a GLO official contacted me and stated, "The General Land Office and its state and federal partners are committed to the TCOON's long-term success and last week provided bridge funding to the previous contractor while the transition to the new contractor is finalized. In the interim, you can access the data for 20 out of the 30 TCOON stations as well as the six NOAA tide stations at the following web site: http://tidesandcurrents.noaa.gov/map/index.shtml?type=PreliminaryData&region=Texas ."

I checked the link and did manage to view the tide level and wind speed at the Baffin Buoy, the one I use most often. I'd still encourage everyone reading this to call or email the GLO and let them know we all want the system back online and fully functional, like before. Such technologies provide effective aids to help us deal with the weather and other environmental factors, though they do little to help us cope with ever-increasing crowds of anglers.

In the Corpus Christi area, where I live and work, tournaments occur every weekend throughout the summer. Many of them allow teams of anglers to compete, targeting the three glamour species: speckled trout, redfish and flounder. Most allow the use of live and natural baits. Over time, some of the organizers of these events have recognized the potential harm to the fishery when numerous people embark with the intention of using live finfish to catch and enter the biggest trout possible. Appropriately, those forward-thinking individuals now either require the fish to be brought in and weighed alive, then released, or they place a maximum size on the trout allowed for entry.

These alterations reduce the number of stiff sow trout slid onto digital scales in these events, specimens which prove too important as spawners to suffer such rude treatment. In the years since I became a coastal fishing fanatic, the state has implemented several laws regulating how many trout one can legally keep and kill, reducing the limit from ten to five across most of the state, and allowing an angler to keep only one fish twenty five inches or longer each day. By doing so, the state openly acknowledges the critical importance of large female fish, and tournament organizers who take things a step further by not allowing their participants to kill and enter such fish do the future of the fishery a favor in the end.

I would love to see the state take one additional step, and issue anglers a trophy trout tag with their fishing licenses, like they do with redfish. Doing so would allow folks to take a really extreme specimen from time to time, for mounting purposes, or for certification as a state or water-body record, but would save many valuable specimens.

I'd also like to see the format of the trout portion of the STAR tournament altered. It seems ironic to me, given CCA's prominence as the most highly-regarded conservationist organization in the state and beyond, that they would run a kill tournament on trout, and use weight as the way to identify the winner. Why not tag and release some smaller trout in each of the three identified coastal areas, and award prizes to the registered anglers who catch them? I can see how this would INCREASE participation in the tournament, and that would serve as icing on a cake where no large trout died in attempt to identify a winner.

In fact, I'd contend the most alluring aspect of the STAR tournament, the part which draws the most entrants, is the redfish division. The average entrant apparently loves the idea of trying to catch a tagged fish. They probably think they have a greater chance of doing so as compared to catching a trophy fish and beating all the hot-shot tournament anglers with more experience and better equipment. So, why not eliminate the killing of large trout as part of the tournament's legacy, and increase participation at the same time? I contend this would show evolution toward a more cohesive conservative mission, one with a higher level of integrity.

Other aspects of the regulations on coastal fishing could use a tweak in this direction as well. When the state instituted the "one over twenty-five" law, they also took the guide's bag limit out of the group, when the guide runs a charter for pay. A group of four anglers and a guide could legally kill fifty fish before the regulations changed. Now, the same group can kill just twenty. Both the elimination of the guide's bag as part of the group and the reduction in the legal limit from ten to five help ensure the sustainability and vitality of the resource.

One unintended and perhaps unexpected consequence comes with the reduction in limits and elimination of the guide's bag though. Guides who target limits now have an easier time getting them for their clients, particularly those using live finfish for bait during the warm half of the year. Many of those guides recognize the ease with which they can get on and off the water with full limits, and they run multiple charters in a day. I'd say this activity lies in direct conflict with the mission implied in the lowering of the limits and elimination of the guide's bag. The state should make it illegal for guides to run multiple charters in a day, or at least limit the number of clients one can take out within a twenty-four hour period.

I hear people up and down the coast complaining about guides taking two, three or even more groups out in a single day, returning to the dock with full limits each time they can. I can't really blame any captain who's doing something legal, though. Only the state can address this issue, through the creation of relevant regulations.

The state might also consider devising a law requiring all captains to carry a ready anchor on board. Along with the increased popularity of hydraulic anchoring systems like Power Pole and Talon has come a tendency for some boaters to think they don't need an anchor anymore. Some, I'm sure, don't carry a conventional anchor because they simply don't want to spend money on one. But hydraulic and electrical systems fail, and bolts break. For safety's sake, no competent, responsible captain would ever leave the dock without a ready anchor on board, regardless of the perceived efficacy and reliability of a fancy mechanical device attached to the transom.

Ironically, equipment, tools, principles and practices which prove necessary and effective for decades can be rendered actually or apparently obsolete under the thumb of constant, rapid change. Spurred by necessity, things evolve as new trends develop and become widespread. People learn to adapt to new technologies, innovations and regulations. While many aspects of coastal angling have changed over recent decades, the need for forward-thinking, flexibility and integrity on the part of anglers and the agencies charged with managing coastal resources remains the same.