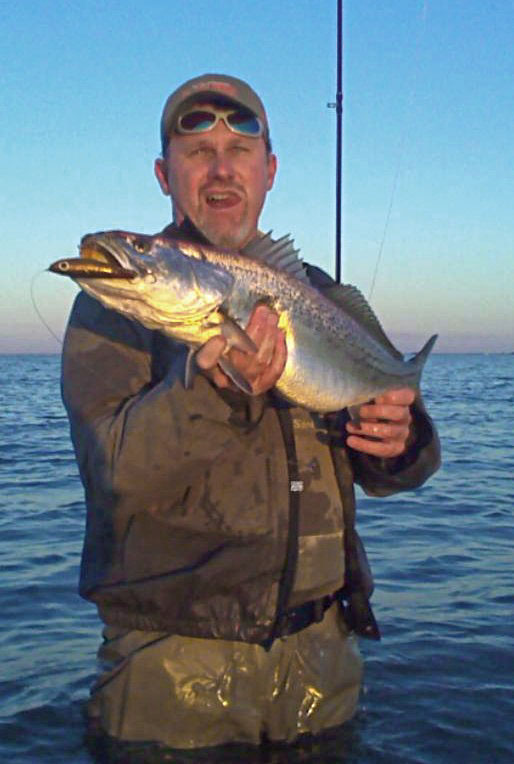 : Captain Kev with an 8 pound trout caught in the gloaming, on Monday, February 7th, during a brief warm up between two frigid arctic blasts.
On the first of February, 2011, frigid arctic air rode the high rails of the jet stream straight down into South Texas, rattling windows, ripping foam off crested waves and causing the palms of many local anglers to sweat. When temperatures remained below 34 in Corpus Christi from the morning of the second all the way to the afternoon of the fourth, those of us inclined to fret were pushing all kinds of panic buttons. Chipping ice off the windshields on the morning of the fifth did nothing to ease our fears.

On Saturday afternoon, temperatures climbed into the low sixties, and water temperatures rebounded from lows in the upper thirties back into the low fifties. Despite another cold night, Sunday's high temperatures reached the seventies. Still, many feared the worst and went searching for dead fish. We found plenty.

Particularly along the east shoreline of the Upper Laguna Madre, the shiny carcasses of dead silver perch, spot croaker and sand trout cluttered the sand bars and grass beds. Gorging gulls plucked out their eyes and pelicans swallowed them whole. Stunned, dying and dead sea turtles washed up by the hundreds; many perished despite the best efforts of locals who rescued all they could. Conspicuously absent were the corpses of speckled trout, redfish and mullet. Especially in Baffin Bay, where we expected to find thousands.

I'd been obsessing over numerous weather forecasts and reports and had done preliminary research in attempt to determine how this cold weather would compare with terrible fish-killing freezes in the past. The website for weather underground gives historical data for many locations, and I was able to pull up the daily temperatures in Corpus Christi during infamous cold snaps which killed millions of fish in Texas.

I quickly learned the disasters of December 1983 and December 1989 were caused by lower extreme temperatures than what we experienced this year. Additionally, both those events lasted longer than this one. The monstrous chill of '83 lasted a full 15 days, with an average daily temperature around 35. The low temperature recorded in Corpus that year was 14 on Christmas Day. Merry Christmas indeed! Fourteen million fish succumbed to the cold statewide as a result of that blast, 4.8 million of those in the ULM.

During the eleven-day deep freeze of December '89, the lowest low recorded in Corpus was even lower, reaching a distinctly mean 12 on the twenty-third. The next day wasn't nice for skinny dipping either, as the mercury plummeted to 18. For the three days leading up to Christmas Eve 1989, the average temperature here in the normally balmy city of dunes and palms was a bleak 27!

Clearly, this year's event did not rival either the December freezes of '83 or '89 in terms of severity or duration. But when compared to the freeze of February 1989, the numbers were much closer. That event involved a rapid drop in temperatures, and for a four day span from the fourth through the seventh, the average temperature was 31. State officials estimated the destruction left in the path of that blast at 11 million dead fish statewide, 9.3 million of those in the ULM alone. Doesn't take a genius to figure out that losing 9 million fish would make for some tough outings in the months and years to come.

This year's event started off eerily similar to the one in February '89. On the first, when the cold air came crashing in, the average temperature in Corpus was 49, compared with 54 on the day the killer '89 event began. Then we had averages of 30 and 29 for the next two days, putting us "ahead" of the '89 event in terms of severity. Our luck began to change, albeit by a narrow margin on the fourth day, when the average temperature climbed to 35 due to an afternoon high of 43. The saving sun, forecast to come out late, broke through the clouds before noon! Some of us hummed the lyrics to the old E.L.O. song which praises "Mr. Blue Sky."

Day five helped us crawl farther out of the woods. Though the morning temperatures were extremely low again, bottoming out at 27, the sun kept on smiling, and the afternoon high shot into the low sixties. Apparently, those "improvements" on days four and five made all the difference in terms of life and death to millions of valuable trout and redfish. Some came out of the depths with their jaws snapping on Sunday the sixth, according to reliable reports from those who were able to catch them.

In other parts of the coast, people did report finding some dead trout and redfish, but the overall effect of this event did not compare to the historically significant freezes in terms of causing widespread mortality among the two most sought-after species in the state's inshore waters. One more day of temperatures hovering around 32 could have made a tremendous difference, bringing the temperatures and duration of this freeze right in line with those experienced in February '89.

Trout and redfish have similar capability to tolerate cold water temperatures. According to TPW, trout lose their equilibrium in water about 43, but don't necessarily die until temps dip into the mid-thirties. Redfish are slightly less tolerant, dying off when the water gets below about 40. TPW's Scott Walker says many variables influence the ability of these fish to survive in cold weather, "including the nature of the temperature decline, the thermal history of the fish before the freeze, and environmental parameters (salinity, alkalinity, possibly pH and maybe even length of daylight)."

In the modern world, anyone with a smart phone can use their fingertips to instantly verify the temperature of the water at various locations around the Texas coast. The readings are reliable only for those specific spots, though, and present only a partial picture of what the fish are being exposed to at a given time. The relevant water temperatures are the ones where the fish are gathered, not at the sites of the sensors. Significantly, waters of different temperatures are known to layer, or stratify, given adequate depth.

Water at the bottom of a deep basin is somewhat insulated from the effects of rapid changes in the temperature of the air over it. Water at the bottom of such a basin will stay cooler in summer and warmer in winter when compared with water at the surface. A thermocline, or line between the water closer to the surface and that closer to the bottom inhibits mixing of the two bodies of water. These facts are accepted by scientists around the world. But what do they mean for specific parts of Texas bays? The answer to that question is not well understood. For instance, how much stratification of temperatures happens in bays with four foot maximum depths as compared with deeper bays?

No one really knows what temperatures the fish are actually exposed to because we don't have measurements of water temperatures near the bottom of the deep holes and channels, nor do we know exactly where they go. Hopefully, data taken from electronically tracked trout will help clarify where fish actually ride out cold weather events like the one we experienced this year. Decades of anecdotal evidence indicates they make their way to places like Offatt's Bayou, the Matagorda Harbor and the Land Cut while the cold passes over.

How safe these havens are likely depends on how deep the water is, and on how well the water is able to stratify (in addition to the other variables mentioned by Dr. Walker). Certainly, fish in the ICW are not helped by barges passing through and stirring the water, potentially moving fish around and sending cold surface water deeper. Nor is it good for people to line up on the banks in the harbors and pull stressed fish off the bottom in massive numbers with hook and line or to scoop stunned fish from the water before they die.

In years past, weather cold enough to send trout and reds into their safe havens guaranteed a "fish kill"; if Mother Nature didn't put 'em on ice, human beings would. Texas Parks and Wildlife now closes many areas to fishing during and immediately after severe cold-weather events. The people managing the resource realize the stocks of fish which survive these deadly freezes will be needed to repopulate the bays.

Collectively, we the people must attempt to control our impact on the fish during these regularly-occurring freeze events. We can't affect how low the mercury in the thermometer goes, nor how long it stays down in the danger zone. But we can make sure we don't exacerbate the situation through excessive harvest of the fish which might survive the event, and that we don't drive barges over fish huddled in the ICW.

It's pointless to worry about something over which we have no control. I knew that before the first frosty gust hit the window last February, but that didn't keep me from chewing all my fingernails down to the quick. The advice given in the Serenity Prayer is sage indeed, but sometimes I find it hard to heed!