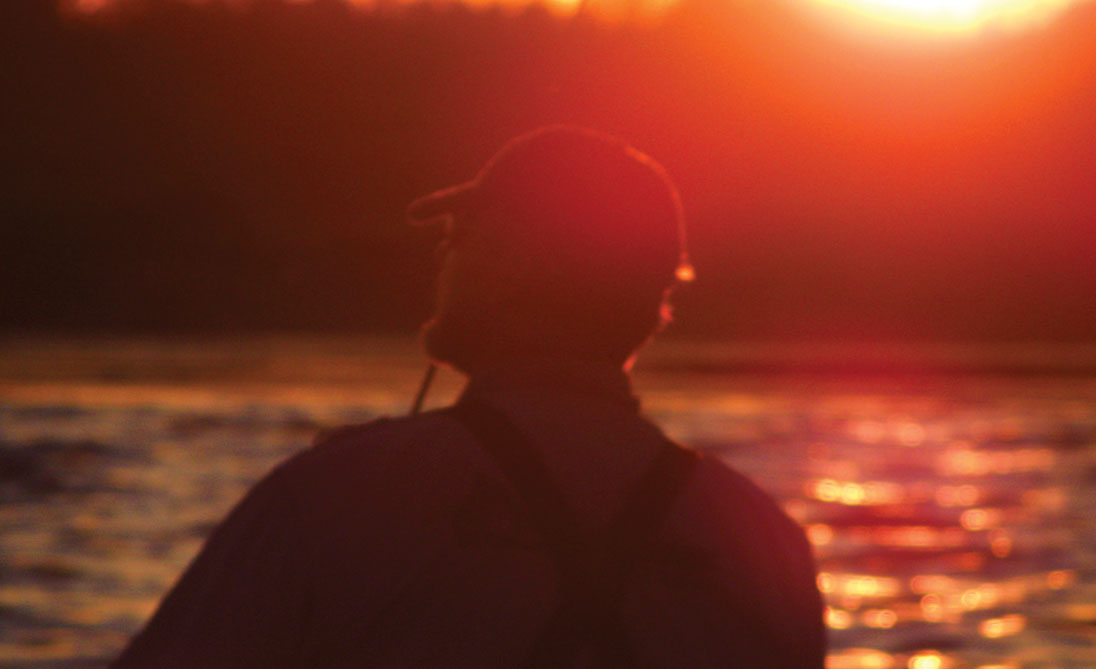 Trout generally feed aggressively while the sun is close to the horizon, either setting or rising. They also tend to bite well on a moonset or moonrise.

When bites are coming regularly, fishing with focus is relatively easy. In fact, when the action is fast, a heightened state of intensity sometimes allows anglers to believe they are actively willing their way to catching more and bigger fish. Such occasions provide poignant learning experiences and lasting memories. Much of the time, though, catching fish is not so simple, especially on artificial lures, and performing productively in those situations requires discipline, patience and perseverance.

The feeding mood dictates choices in location, lure and presentation. An angler with greater recent experience has a better chance of correctly predicting the activity level of fish at a given moment. Those who fish less frequently will be forced to allow reliable principles to shape their predictions.

Regardless of how many recent excursions one has made, any serious angler should embark on a trip with an idea in mind of how aggressively the fish are likely to be feeding. While on the water, astute anglers will then cross-reference their predictions with observations which help verify or dispute the original expectations, all with the idea of making correct decisions about where and how to fish.

No amount of creativity and persistence will pay off if no fish are present in a chosen spot. Anglers should focus on areas strongly suspected to be holding fish, based on visual observations like bait activity, suspicious-looking swirls, the presence of tide rips, mud stirs or color lines, or because fish have been caught in the place recently and/or regularly over a longer period of time.

If the targeted fish can be seen in the water, all guesswork will, of course, be eliminated, but for most anglers most of the time, seeing the fish before catching them isn't possible. Locating fish is the first step in catching them. Accurately predicting the feeding mood helps in locating fish.

Aggressively feeding fish are more likely to be found on top of shell reefs or right next to rocks. They might be lying in wait in a sweet ripple or along the edge of a pothole, roaming tight to a shoreline grass mat or prowling along a main-bay drop off. All will be actively looking to seize upon any opportunity to make a meal out of one of their aquatic brethren.

On the other hand, negative fish often move away from structural elements and sit on the bottom with their heads down, nodding and napping. Some slowly meander along, suspended a distance from the surface, oblivious to all potential feeding opportunities. Most of the time, fish are found somewhere between these two extremes.

The choices of place, strategy, lure(s) and presentation(s) should be based on various criteria which affect feeding mood, including the season, time of day, moon phase and position in the sky, tide movement, water temperature and weather conditions. Adding up all these factors accurately is not easy, but some attempt should be made, so potentially productive strategies can be executed with planned focus.

Ideally, the fish are aggressively feeding, allowing favorite lures and techniques to be deployed effectively in familiar places. More often, adjustments and allowances to plans must be made to account for a more subdued feeding mood among the desired target species. When fish are difficult to catch, anglers often become frustrated and/or bored, and their responses then decrease the likelihood they'll find and catch fish. Depending on the personality, preferences and style of the angler, these negative responses vary.

Someone who has difficulty standing still or staying in one place often reacts to a slow bite by moving too much. For a wading angler, this generally means walking too fast through the area without making enough casts at each likely looking spot; for a boating angler, it means running around frantically without spending enough time in one place.

On the other hand, anglers who are reluctant to move around much tend to slow down even more when they aren't getting many bites; eventually, some stop moving or casting at all. Ideally, one should react to a tough bite by narrowing the focus to the "fishiest" part of an area, then intensely working through it, either by wading slowly or controlling the movement of the boat, and working to make every cast count.

The fishiest part might be the most prominent structural element within an area, like a cut in a reef or jetty, a set of rocks next to a sand bar, or a drop off next to a deep, open basin. It might also be something more subtle, like the edge of a reef system, where shells thin out onto a muddy bottom, a pretty set of potholes in a grassy meadow, or a large grass mat with wind blowing against its front side. It might also be a specific depth of water or a transition line from one color of water to another. Making a concentrated effort in some kind of small-scale, specific place is a first step in locating and catching fish during a tough bite.

When making the concentrated effort, anglers should be aware of how a slow bite tends to negatively alter lure choice(s). Versatile anglers who are skilled at using various kinds of lures can become scatter-brained and overly experimental, changing lures every five or six casts. In the worst-case scenario, they seem bent on throwing everything in the box at the fish, in a desperate search for a magic bullet which doesn't likely exist.

Anglers who are more committed to one type of lure sometimes abandon changing altogether, becoming mindlessly married to one darling plug. Changing lures too frequently rarely achieves desired results, sticking with one lure and/or presentation too long is likewise almost universally ineffective.

When trying to catch finicky fish, smart anglers tend to experiment more with presentation than lure choice. Conversely, less-successful ones generally fall into what I call "auto-pilot mode" with regard to presentation, making too many casts without significantly altering the way they work a given lure. In essence, they are operating insanely. If some presentation is not eliciting strikes after twenty or so casts into an area expected to be holding fish, it should be changed somehow. Repeating something unproductive and expecting different results is just plain crazy!

Smarter anglers remain cognizant of the need for systematic experimentation and implement changes to presentation methodically. They are also willing to rethink their plans and generate new ones. Doggedly refusing to scrap the basic pattern can also be the reason a skunk comes aboard for the boat ride home.

Sometimes, the best way to turn a slow outing into a productive one is to reconsider the original plans related to pattern and do something radically different. Once a bite has been determined to be tough and a narrowing of focus has been made, including the selection of a sweet spot followed by a thorough, patient and creative effort within that spot, a change in pattern might be necessary.

The modification normally involves focusing on a different depth of water and/or type of structure. It can mean choosing to wade instead of fishing out of the boat, or vice versa. While commitment to a seemingly sound plan is critical to establishing and maintaining confidence, stubbornly sticking with a plan for too long becomes downright stupid.

Anglers most adept at catching fish on tough days do not allow a slow bite to steal their focus and intensity; they anticipate difficulty and react gracefully. Resisting auto-pilot mode, they fight to maintain conscious control over the fishing effort, by making an intelligent choice of where to fish, then making a limited number of calculated changes to both lure and presentation, without experimenting in a random fashion. Often, they are able to coax a few rewarding bites on difficult days.

In large part, this ability to react appropriately to difficulty begins with an acceptance of the frequency with which a relatively tough bite is encountered.

The best wading anglers don't allow frustration to transform them into track stars, nor do boating anglers run around like race car drivers. Certainly, they don't give up and become channel-surfing couch potatoes either. When the going gets tough, the toughest anglers don't necessarily "get going"; they fish with narrowly focused intensity, discipline and determination.