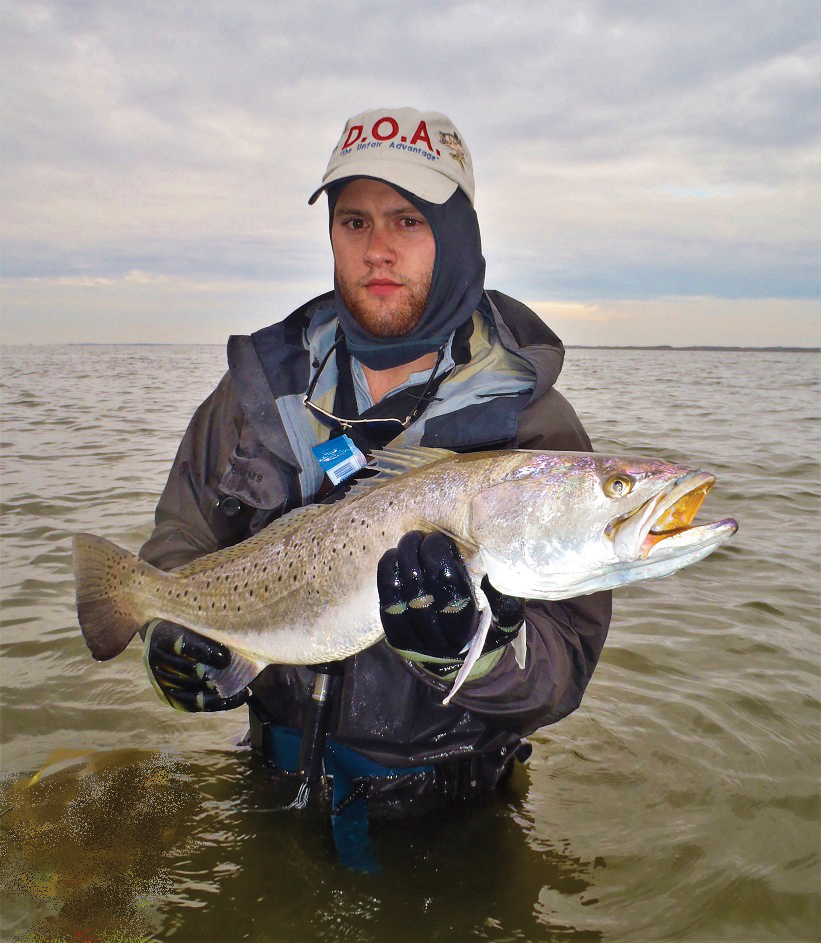 Matt McCollum with one of four stud trout he caught within a span of about 45 minutes while fishing with the Captain in December.

During the holiday months, anglers who prefer fishing exclusively with artificial lures cast eager eyes toward to the culmination of autumn and the onset of winter. The transition between these seasons ushers in more than family rituals, it generates higher potential for catching multiple jumbo trout on the same occasion. Generally, anglers using lures catch more big trout per hour of effort in cold weather, while those using live bait catch more during hot weather.

Certainly, people baiting hooks with live croakers, piggy perch and other finfish catch their highest numbers of trout meeting or exceeding the 25-inch mark from May through July, decent numbers for a while both before and after the peak period. Conversely, anglers using artificial lures fare better from November through February; the run certainly extends into the spring months too, until the really hot weather arrives. Anecdotally, I'd say these related truths result from facts about how trout behave when temperatures reach their extremes.

In both hot and cold weather, most trout retreat to deeper water to escape discomfort in the shallows, but some defy the norms of their species. Some big trout apparently don't fully appreciate the risks inherent to remaining in the shallows during bitter cold snaps. We know this because people regularly find giant sows floating belly up in places like Pringle Lake and Nighthawk Bay after frigid weather moderates. Obviously, these old fish could have survived, if they'd simply followed their schoolmates and offspring to the deeper water a short distance away.

Similarly, some big trout stay in shallow water during the year's hottest days. People traveling across vast shin-deep flats on tower boats in South Texas throughout the summer can verify the fact. Finding isolated monsters and small pods of giants far away from any drop-off might cause one to conclude large trout don't generally show a preference for deeper, cooler water when it's hot. Other evidence renders such a conclusion false. In many Texas bays, lots of large trout move into deep basins and areas close to channels like the Intracoastal Waterway and shipping lanes during the summer months.

People tossing live croakers along ship channel spoil banks can document the veracity of such a statement. Of course, those people catch far more trout under the 25-inch mark than over it, but they do catch more big trout during summer than lure-chunkers wading shallow shorelines and structural elements. Partly, anglers using live bait to target trout in deep water during the hot season catch big fish because what they're offering allows them to cull some of the largest individuals from the schools.

One reason people wading shallow water or even throwing lures into deeper water don't catch more big trout in hot months relates to the diet preferences of mature trout. Given a choice, a large trout will take a finfish over a shrimp, sometimes eating meals of extraordinary size. I've caught many whopper trout with the tails of keeper trout sticking out of their gullets; mature trout eat horse mullet, ribbonfish and needlefish too. Motivating fish with such healthy appetites to take a soft plastic, topwater or twitchbait of the size most anglers can present on light tackle becomes nearly impossible during the time when trout have so many favorable sources of natural food around them.

After the fall migrations end, and winter settles in, trout have fewer choices about what they can eat. Sure, giant female trout can still swallow their smaller mates and offspring, and they do. But, in some cases, they become much easier to urge to strike smaller offerings, like metal and plastic ones molded entirely by the hands of man. Additionally, large trout gather in predictable places during the cold season, some of them similar to the ones they prefer when it's hot.

In the hot part of the year, deeper water is usually cooler than shallow water. In the cold part of the year, the situation reverses, and deeper water usually runs warmer than the shallows.  Obviously, these general truths don't exist in a static medium. This inversion takes time to unfold, and within the two extreme seasons, the truths don't apply equally at all times, as local weather plays a role. Particularly in winter, the location of the water of most favorable temperature to a trout can and regularly does change from deeper to shallower.

After a strong cold front passes over the coast and air temperatures fall to their lowest values, water temperatures also decline. In response, when water temperatures in the shallows fall below 60° and stay in the 50s for more than a few hours or so, trout typically retreat to deeper water to escape the immediate effects of the chill. This truth carries the most weight early in the cold season, from November through January. As a result, many trout find their way into channels and holes during this timeframe. Because cold trout can't afford to expend lots of energy fighting strong currents, they often wind up huddling in the ends of channels where currents run slow, in places like canal subdivisions and secondary ditches extending off the Intracoastal Waterway.

Trout, including large ones, also find their way to holes and open basins during situations like this. If water temps fall low enough, they gather in cavernous holes like Offatt's Bayou in Galveston, but during more moderate events, numbers of them stay in the deepest basins in the hearts of all the main bays. Anglers who recognize these facts then experience fairly easy catching, including bigger than average trout, by targeting them with lures from the deck of a boat in places like these. The relative scarcity of food choices available to the predators in the cold season likely enhances the productivity of those efforts.

Significantly, the situation can and often does reverse itself during the cold months, as water temperatures rise faster in shallower than in deeper water during stretches of warming weather. This sometimes sends large schools of jumbo trout onto shoreline flats or to relatively shallow areas around structural elements, where wading anglers with lures can target them effectively. I'd say this scenario, more than any other, allows anglers who know the precise locations where these events regularly unfold to catch numbers of big trout during the coldest part of the year.

In some cases, when warm trends pull fish out of holes and basins onto shorelines and structural elements, schools comprised of fish of all sizes move into those places. In others, schools made up almost entirely of large fish do so. This kind of scenario presents the potential for a bonanza of the coolest kind, for those of us who crave catching monster trout.  I've played a role in several such shows over the course of my career.

The first one I recall vividly involves a cameo appearance on my part. It occurred on the day when appendicitis rendered me incapable of functioning after the first hour or so. After catching two six-pounders on my Super Spook, I lay prone, moaning on the sand and shell at Garrison Ridge, in Sabine Lake, while my partners proceeded to catch about 100 trout weighing five pounds or more, most measuring between 24 and 26 inches, with several in the eight-pound class, all on topwaters. The fray created quite a din, as my three buddies strutted around measuring fish, taking pictures, laughing, hooting and high-fiving, as anyone would when such an event unfolds.

This occurred on a December day in 2000, when temperatures reached a high of about 80°, and a strong, steady south wind blew off the bank. I suspect this impressive school of jumbo trout had assembled well offshore of the muddy flat while colder weather prevailed in the days prior to the epic one. When the air temperatures moderated and the huddle broke, they swam into the shallows as one, their jaws snapping viciously at whatever moved in front of their faces.

Upper Coast anglers repeatedly take advantage of this kind of situation, when onshore winds and warming weather cause fish to move out of the depths and ride rising tides into the shallows along leeward shorelines. Anglers catch big trout on the south shorelines of Sabine Lake, Galveston's bays, both Matagorda bays and Coastal Bend bays on days like these, from November through January. In South Texas, a different kind of situation offers perhaps even more potential for catching numbers of magnum trout.

From November through January, cold weather drives trout in bays like Baffin, Nueces and both Laguna Madres into relatively deep basins, within reasonably close proximity of the north and/or west shorelines.  When frigid temperatures turn and begin to rise, these fish leave the holes where they've ridden out the cold and move onto nearby flats and toward shallow structural elements.

Jason King and I found a school of stud trout in just such a scenario on the 9th day of December 2013. We began our effort throwing soft plastics, but when we found the bites easy to entice, we switched “up” to slow-sinking Paul Brown Fat Boys. In water of about 55° or so, at first in the immediate vicinity of large rocks lying close to the open basin of Baffin Bay, eventually on a mushy, grassy flat nearby, we managed to entice at least twenty big fish to bite, landing 7 trout over 27 inches, up to nearly 30. Sadly, I hooked and lost 10 others, which felt as big or bigger while I fought them. This led to an impressive run of catching monster trout, which extended well into April of 2014.

Later that same month, the college-aged son of one of my customers improved his personal best trout four times within an hour, starting with a 28.5-incher and moving up a half-inch each time, to 30. The combined weight of his four donkeys came to 31.5 pounds! Every one of them bit his Catch 2000 beside the same rock, one we couldn't see in the calm, stained water.  After he got the first bite, I said, “I think you found the right rock,” and told young Matt McCollum to plant his feet and keep throwing in the same place, until the hits stopped coming. He did as he was told and made his effort pay!

That's part of the moral of the December story. Smart trophy trout anglers stand and grind when they get a bite during the Christmas month, especially when they catch a big fish.  When the right forces align this time of year, the door of potential opens to catching several or even scores of memorable trout, as opposed to just one or two. Mature trout often huddle up and move around in schools in winter. When they arrive in the shallows, their strong, shared hunger pangs sometimes urge them to play prominent roles in our picture shows.

Capt. Kevin Cochran: Switching Lure Types – When and Why