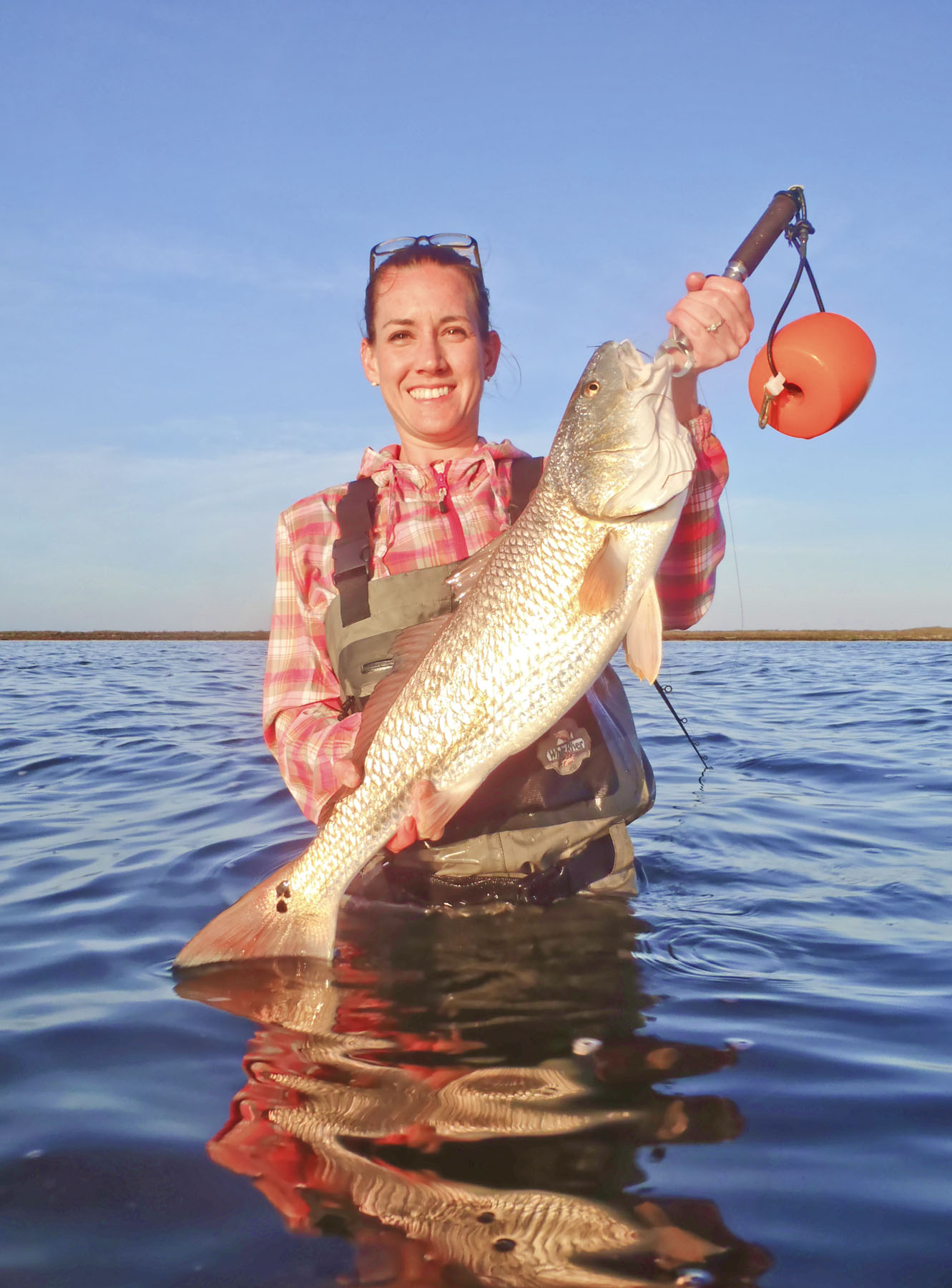 Nicole Biggerstaff coaxed this long, colorful redfish to bite a soft plastic cast into sandy pockets endowed with small rocks on a day when the prevailing conditions prevented those bottom features from being seen.
Consistently productive anglers use a pair of related approaches. They rely on a catalog of proven "sweet spots" to determine where to fish, and they trust their fishing acumen to help them locate fish in less-familiar places. Some experts are more "spot fishermen", while others tend to fly without a plan, using their senses to determine where to make the effort at a given time.

No successful angler can sincerely argue against the importance of accumulating an extensive list of reliable spots. Understanding how environmental conditions affect the potential productivity of each place in the catalog is an important component in the quest for success. Expert anglers also recognize the need to avoid tunnel vision on fishing spots exclusively. This is best done through the thoughtful application of experience observing signs on the water which indicate the presence of fish.

Sometimes, the signs are easy to read. Slicks popping in a corner of a cove, endowing the air with a sweet melon scent, send a clear message to anyone with eyes and a nose. Gulls hovering low over the water in bunches, dipping, diving and squawking, send music to the ears of those in the know. Bait fish jumping frantically out of the water, making a long, low, fast leap, betray the presence of predators close on their tails, as do shrimp hopping into the air, propelled by snapping tails.

These signs (and other more subtle ones like mud stirs, swirls and wakes) indicate the presence of fish indirectly. Sometimes the targeted fish can actually be seen in the water, or jumping out of the water. If trout or redfish are spotted chasing bait so aggressively that they fly out of the water, any angler knows the potential for catching in the area is great. Making a decision to attempt to catch fish in close proximity to a place where such things are observed is a "no brainer."

But what about those times when the signs aren't so easy to read? What about the most difficult situation of all, one in which all signs of life are absent? This scenario presents itself perhaps most often in winter, when the water is cold, but "dead water" can be found during any season, under any conditions.

Calm spells occurring after frontal passages in winter can create difficulty for anglers who like to use their senses to locate fish. Looking across vast expanses of smooth water capped by a mirror-like glare and seeing nary a ripple, wake or anything else which would indicate the presence of a piscatorial creature can be intimidating indeed. On the other hand, whistling winds which whip the froth off the tops of tall waves can make spotting bait fish difficult too. And high winds often muddy the waters, making it impossible to detect mud stirs and color changes.

When the prevailing conditions create a situation where signs of life are non-existent over the entire targeted area, smart anglers resort to specific strategies to determine where and how to catch fish. Mostly, this strategy is "spot fishing" in combination with a calculated method of selecting lure(s) and presentation(s). Careful consideration of the long-term history of the spot in conjunction with the season, weather conditions and other environmental variables is critical.

When I encounter situations in which it is impossible to use signs to determine where fish might be, I rely first and foremost on my knowledge of exactly where I've caught fish in the area during the same time-frame. The time-frame or season has huge significance. I prefer to fish in proven places when signs are non-existent, meaning in places where I've caught fish many times before during the same month or part of the year.

I also feel most confident when I'm able to recall catching fish in the place when conditions were similar. Not necessarily the lack of bait fish or other signs, but factors like water clarity and temperature, wind speed and direction, and air temperature. If several of these things are like they were on many occasions in the past when fish were present in a spot, I can more readily assume fish will be there again, even if I can't see a sign indicating the fact.

I like spots which have distinct features in addition to a healthy record of past productivity in the time-frame and prevailing conditions. Grass edges, drop offs, rocks, reef contours, potholes systems and other structural and cover elements can create "micro spots" within the area. These small-scale spots are potentially most productive when signs are weak and meek.

Without clear indicators of fish, I feel most comfortable throwing at something relatively small in scale, since I assume any fish within my reach is probably not actively feeding or moving around much. Without moving fast through the water, maybe without moving at all, I tend to make many casts around a known fish-holding feature, adjusting the precise location of the casts and subtleties of the presentation. Normally, inactive fish are unlikely to chase a lure down from far away, so scouring an area thoroughly is often the best way to place a lure in close enough proximity to a fish to generate a strike.

Once a proven-productive place complete with some kind of smaller-scale feature known to regularly hold fish has been selected, the best plan for lure choice is to assume the fish will be difficult to catch. For me, that means using soft plastics first. Much of the time, negative fish are easiest to entice into biting soft plastics dragged close in front of their noses.

If the water is murky, a paddletail makes more sense, because it gives off vibration when it's retrieved, and moves along a straighter path, making it easier for fish to locate. On the other hand, if the water is clear, a rat-tailed worm makes more sense, because it moves in a more erratic fashion, which tends to trigger reaction strikes more readily. The optimal size of the jighead depends on the water depth, temperature and presence of current. Lighter jigheads work better in cold, calm, shallow waters, while heavier ones are better suited to warmer, deeper water, especially if it's windy.

Sometimes, dangling the soft plastics under a cork or topwater works much better than fishing them along the bottom. Particularly when the water is extremely murky, corks and plugs trailing worms work well, creating plenty of attractive noise, but moving slowly and allowing the worm to settle enticingly in the face of the fish and remain there long enough to trigger a strike.

On some occasions, other lures like slow-sinking twitch baits will outperform soft plastics. I particularly like sinking versions of Paul Brown's Original Lures in clear water, but I prefer louder, flashier ones like MirrOlure Catch 5s and Strike Pro Baby Busters if the water is murky. I feel most confident throwing twitch baits at the fish in a situation without signs when I've been successful with them regularly on recent trips, especially if water temperatures are much the same. Those water temperatures usually range from the mid-50s into the high-60s.

In warmer waters, I sometimes use topwaters to target fish when no signs of life are present. Inactive trout in hot water are sometimes easiest to entice into striking fast-moving floating plugs. Small ones like Super Spook Juniors and Baby Skitter Walks are easier to work fast, so I'm almost always throwing them on such occasions in the summer. Though I work them at high speeds, I also pause them frequently. Many times, the speed bursts make the fish follow, but the strikes happen while the plugs are sitting still.

In recent years, I've discovered the effectiveness of topwaters endowed with propellers in these types of situations too. I refer to lures like the MirrOProp as "slush baits", paying homage to the sounds they make when retrieved. Mostly when it's bright and windy, I find these plugs to be capable of turning a dead bite around, and won't hesitate to try them, even if I can't see any reason fish should be in front of me.

All these lure and presentation choices are made in consideration of the conditions of the moment. Ideally, I have past experience catching fish in the exact location on the same lures during similar conditions. In this way, choosing lures and presentations is much the same as choosing a specific place to fish when no signs of life aid in the location of fish.

People who are stubbornly married to fishing signs are at a disadvantage at times like these. Spot-fishermen are better able to fish confidently, relying on specific bodies of past knowledge, rather than temporal skills and instincts. When no signs of life present themselves to provide clues as to where the fish will be, wise anglers pick their spots carefully and work them thoroughly. The ability to do so effectively requires them to have an extensive catalog of spots with which they have intimate familiarity.