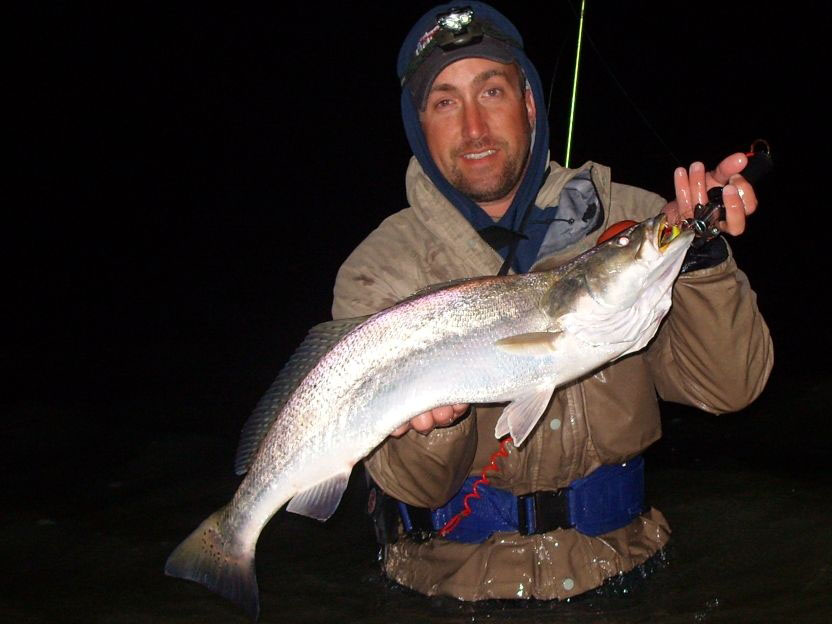 Why would Texas City angler Ari Schwartz stay awake for hours on end fishing through the night? Perhaps the satisfied look in his weary eyes and the nine pound trout he's holding provide some clues!

I market myself as a teacher among fishing guides. Consequently, many of my customers ask questions when we are on the water, and I encourage them to do so. I'm happy to explain the thought processes and decisions I make as we go through the day. But I'm not able to answer some of the questions that are posed.

Celebrity anglers with their names sewn into their shirts are not qualified experts on every subject related to the water, though some pros apparently claim to be just that. It's not surprising that a few successful anglers develop this kind of hubris. People doing anything well over time naturally experience increased confidence in their abilities, especially if prizes are involved. When left unchecked, such confidence can easily mutate into bloated pride, leading to overestimation of knowledge and expertise.

In the fishing world, this hubris seems to cause proficient anglers to present themselves as experts on weather and water quality issues, as well as making them overstate their ability to assess the abundance of fish in an area or region. I don't want to fall into that trap, so I consciously attempt to remain humble when responding to questions related to subjects about which I know little.

"What's this weather going to do?" I'm often asked, sometimes days or weeks before a scheduled charter. Generally, I point out that in spite of the one class I took in meteorology at the university, I am truly not qualified to give weather forecasts. Heck, as often as I check the weather on the internet and see how rapidly the forecasts change and how regularly they are wrong, I'm not sure the degreed meteorologists with all their modern tools are qualified either!

There currently are no studied experts on brown algae, another subject my customers are fond of asking me to explain. I'm frequently asked about the water quality by other fishermen. "How's the water look in Baffin?" they want to know.

"It's been brown tide for months," I'll answer, then the follow up questions usually come.

"It's brown tide again? It was beautiful when I was there in March," they say. Then, "What caused it to come back?" and "When will it go away?"

I must confess that I just don't know. Regularly fishing waters affected by the algae won't transform me into an expert on the organism. If it did, the unfortunate African citizens living in villages ravaged by A.I.D.S. might be magically made into doctors.

At present, there has been no extensive study done on brown algae, so there are no experts on the subject. Those saying they know why it blooms, how long it will persist in an area or what will make it go away are simply making things up and presenting opinions as facts.

Fishing experts are notorious for doing just that. They cook up ideas in their heads, sometimes simmering them thoroughly enough to confuse theories with solid, scientifically verified facts. Most prominently, experts have this tendency as it relates to fish behavior, especially preference of lures and colors.

I can't count how many times I've heard someone assert that a particular color was the key to the catching on a particular day; I've surely made the claim myself. But really, unless the same angler tosses the same lure in different colors at the same fish, it's impossible to say that color is the factor most affecting the number of bites.

People making the color claim sometimes say they tested the same lure in a different color while fishing shoulder to shoulder with the "other guy." They "watched him real close" and are sure they worked their lure the same way, but unless they were using identical tackle, their lures might have been moving through the water differently. A subtle variation in presentation could easily override the difference in color.

This isn't to say that color never matters, simply that it's hard to prove when color matters most. Personally, I'm convinced that movement patterns in lures are more important than color most of the time. Certainly, the choices of type and size of lure seem to be of greater significance than color. There are, of course, those occasions when we get the feeling we've found the magic tool or method for the day, the one that will catch more fish than all others.

I've been on that side of the fence. But I've also been on the side where a friend walks up and offers the "only thing they are biting," so that I can get in on the action too, mere moments after I've caught several big fish on something entirely different!

Finding out that a pet lure isn't the only tool for catching fish on a given day can pry open one's eyes to new possibilities and preserve humility. Measuring a day's catch against the efforts of others is a proven way to grow as an angler; it helps one avoid the mistake of making too much out of a limited experience. It is just plain easy to jump to false conclusions when fishing. Often, the fallacious facts fishing experts allege are based on a common tendency to "mammalize" fish, or worse, to endow them with human attributes.

Scientists have shown that fish have tiny brains when compared with mammals of all sorts. Certainly, fish are not capable of processing complex information through rational thought, as are human beings and other animals. Fish are more like redhead ducks than whitetail bucks. People who describe smart, old fish that have learned and remembered things over time are, I believe, mistaking acute multi-sensory perceptive faculties and instinctive behaviors for acquired and accumulated intelligence.

Rather than go into a discussion of numerous theories which in my estimation are misrepresented as facts about speckled trout, let me here plainly state that I don't know any more about the ideas than do those who present them as facts. But that's just the point. I will not pretend I have real and sound knowledge on some subject unless I do.

Take the mortality rate of caught and released trout. For years, many guys driving wrapped boats said that most trout could not survive release. These guys had basically no way of knowing much about this. Then Dr. Gregory Stunz, a marine biologist, actually did a study on the subject, complete with a control group, a hypothesis, observation of fish over time and analysis. His scientific efforts showed that trout can indeed survive release, and at a high rate, regardless of the method used to catch them or the season in which they are caught.

I will choose to believe in his results rather than cling to statements made by fishermen who believe what they want to believe regardless of evidence brought to the contrary. I will also refrain from presenting my theories as facts when there is no real evidence to back them up.

All fishing experts have ideas about the fish and how best to catch them. For instance, I and many others like to fish wind-blown shorelines and structural elements rather than leeward ones. "Why do fish prefer the windy side of the bar?" Though I could go into an ego-driven dissertation about oxygen levels and plankton and other such factors, I really don't know. More importantly, I wonder, "Why ask why?"

If a strategy, method, pattern or presentation produces desired results, I use it. When expert anglers find something that works one time and can verify that it's not a fluke by proving it will repeat itself, they simply add it to their repertoire. It really doesn't matter why something works, simply that it does.

In essence, fishing is more art than science. An artist attempts to create an aesthetic or significant result within a genre by using the tools of the trade. Fishing is our artistic genre; rods, reels and other tackle are the tools of our trade.

Actually, within the genre there are sub-genres. Teams of anglers trolling for billfish use different tools than a single angler aboard a kayak in a backwater lake. The desired outcomes of those two endeavors are much different, though they both fall under the umbrella of the art of angling. One outcome isn't necessarily better than the other; beauty in fishing is, as with other arts, in the eye of the beholder.

Some find classical music to their liking, while others favor hip-hop and rap. Some like realistic landscape paintings, while others prefer impressionism and abstract splashes. A boatload of chuckling buddies are content chasing birds and boxing quick limits of school trout, while a separate solitary wader grinds a shoreline all day for a few bites and releases the big trout he catches. The appreciation of art falls into the subjective realm; what one likes is right for that person.

The production of art is an attempt to create beauty; science, on the other hand, involves a search for basic, objective truths. An artist might take a pencil in his hand and draw a perfect circle on the first attempt, but he cannot redesign the universe and make a round world flat. Believing something is true and wanting it to be true do not make it true. The truth is straight as a laser and stronger than steel; bending it with the mind is as easy as weaving a rope of sand.

So I will leave the science to the scientists while I continue to polish my skills and practice my craft. When the winds calm, I will slow my presentations because I've learned that doing so will usually result in more bites. When baitfish stop jumping and the blowups on my topwaters become less frequent, I will switch over to other lures. I will do these things with confidence, without demanding explanations as to why they work.

Like a maestro waving his wand to guide a band of musicians, I am expected to produce a desired result when I'm the captain on a chartered trip. My reputation is based on my ability to consistently produce that result, not on my depth of understanding of all the underlying variables that come into play.

When fishing, we are not gathering scientific data. Our methods do not allow for that. I encourage my clients to ask me questions about the fishing, but I hope they realize I don't have the answers to everything related to what we're doing. What I do have is a sincere commitment to make something beautiful happen just the way we want it to!